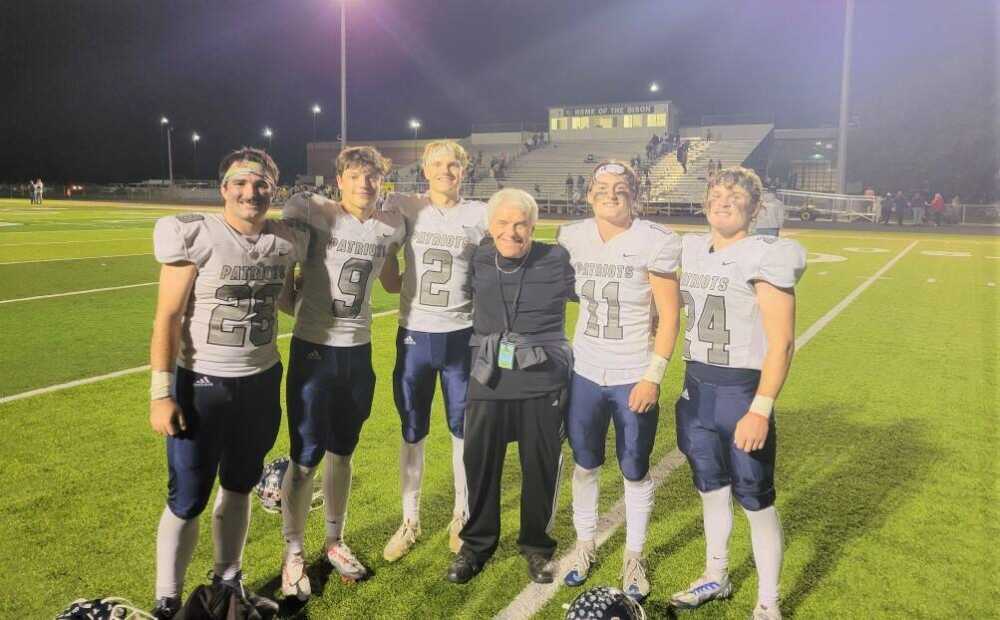 *Nobody has come closer to the mighty Aurora Huskies than Boone Central this season, and that being a 34-13 loss back on September 2nd. The only other setback for the Cardinals has been an excusable 48-26 loss to also powerful Pierce, that setback coming on a more recent October 14th Friday.

The Cardinals offense features an outstanding, polished quarterback in Alex Christo, who has passed for 1,541 yards and 19 TDs and rushed for another 436 yards with 10 more scores. SIX different receivers have notched over a hundred yards catching passes this year, including season leader Jack Roberts, with his 346 yards and 6 TDs.

Oh yeah, Boone has a 1000 yard runner in junior Parker Borer, who has powered his way to 1,177 yards with 20 TDs after finishing his sophomore year with 898 big ones and 10 touchdowns. Ths dude is a real BALLER!

Defensively it’s Roberts, (74 tackles), who has an incredible 27 TFL in 11 games, and team leader, junior Hank Hudson (80 stops), who is the son of Cardinals head coach, the great Mark Hudson, one of the best in the biz.

The 64,000 dollar Aurora question right now is the availability of super back Carlos Collazo, who went out with a high ankle sprain in the October 14th 73-19 win over Fairbury. The word all along has been Collazo may return for the C-1 semifinals and that time has arrived. We shall soon find out.

In Collazo’s absence, speedy Huskie QB Drew Knust and speed burner Maddex Egger have been very capable, especially Knust, who is a Master of Trickery with a football in his hands.

*Adams Central is in the Class C-1 postseason picture for the fourth straight year, and the C-1 semifinals for the second time in the past three seasons and the 2022 opponent? The same Pierce team that has sent the Patriots packing in 2019 and 2020. BUT, not many thought A/C would beat a red hot McCook team last Friday and the Patriots took care of business 31-14.

Adams Central has one of the most deadly 1-2 running game punches in Nebraska 11-Man football, featuring 3-Time 1000 yard rusher Hyatt Collins (1,066 yds/21 TDs) and junior speedster Nick Conant (792 yds/9 TDs). Coach Shawn Mulligan also has a top notch quarterback in Sam Dierks, who has thrown for 1,491 yards and 8 touchdowns. Dierks has FIVE 170+ yard receivers to choose from including an amazing junior in Jayden Teichmeier (26 catches/497 yds/3 TDs) who has glue-like hands and terrific leaping ability.

Defensively, the Patriots boast a trio of All-State candidates in brutal linebacker Jaxen Gangwish (81 tackles/47 solos/8.5 TFL), big 6-4, 220 pound Leighton Weber (69 tackles/37 solos/13 TFL/7 sacks) and Conant, who has 52 stops, 37 of which are solo sticks. And don’t forget Teichmeier (4 INTs) the great Holden O’Dey (3 INTs) who are often times both in the right place/right time to make a pick.

This 2022 Pierce ballclub might be one of the scariest in head coach Mark Brahmer’s career. Senior quarterback Abram Scholting is already a two-time All-State selection and has posted some pretty gaudy passing/rushing numbers in the Bluejays first 11 games (2000 yards/37 TDs/581 rushing/6 TDs). Scholting is also one of the brainiest field generals in the state, rarely making a wrong decision.

Scholting also has a two-time All-State, Two Time 1000 Yard Receiver in Nebraska football pledge Ben Brahmer (65 catches/1,229 yds/17 TDs) who catches anything that comes near his grasp. Brahmer has also been nearly impossible for anyone to pass cover since he was a Freshman. The dude is literally the “Chad Kelce” of Nebraska High School football.

No worries about the running game either with senior stud Keenan Valverde (1,493 yds/22 TDs) handling the majority of the ball toting for Pierce.

The Bluejay defense is paced by junior Korvin Fritz, who has compiled 122 tackles from his LB slot. Tristan Kuehler, another linebacker, has 78 tackles in addition to being a fine running back (422 yds).

And then there’s Ben Brahmer, who has 3 fumble recoveries and a mere presence that demands opposing offenses run plays to his opposite side.

These two defensive juggernauts clashed back on October 7th, with Battle Creek winning a hard fought 21-12 slobberknocker battle, Cedar Catholic actually had a 6-0 halftime lead in that contest, but couldn’t hold on. Cedar’s other two losses came at the hands of Class C-2 stalwarts Norfolk Catholic and Oakland-Craig.

NOW, here’s the deal on Cedar’s offense if I’m reading this correctly. Senior Ben Jones was the starting QB for all 9 regular season games, throwing for 869 yards and 9 TDs. There has since been a change in quarterbacks.

Could the cause for the QB change be because of Ben Jones’ 43% completion percentage and 9 interceptions to go with his 9 touchdowns Or was it the simple fact Jones displayed a superior ability to run the football and Coach Cattau knew the Trojans had a capable quarterback backup in sophomore Braden Reifenrath.

So, when the playoffs began, Head Coach Chad Cattau appears to have moved Jones to running back and inserted Reifenrath at QB. Ben Jones has responded with games of 164 and 110 yards rushing respectively, while Reifenrath has completed 18 of 32 passes for 196 yards with a pair of touchdowns in two playoff matchups.

Looks like the switch is working well to me.

On defense, Cedar Catholic has a stout D-Line with different players who come up big in different games. Spencer Albers (79 tackles/8 TFL), Jalen Lammers (69 stops/8.5 TFL) and Jay Steffen (56 tackles/8.5) are among the leaders who come through every game for the Trojans.

One thing we know about Battle Creek is the fact their defense gives up less yardage per game than Norfolk Catholic. That is a chilling fact, folks. The Braves have barely allowed a 1000 yards rushing and 1000 yards passing through 11 games this season. (208.3 total yards per game).

The tackles are well distributed throughout the Braves defense and the fact Battle Creek has 354 solo stops out of 526 total TEAM Tackles (67%) indicates to me that this group is solid wall to wall on defense and has 11 guys who know how to tackle.

The Braves still lean on the run offensively, with bruising junior Trent Uhlir leading the ground attack with his 917 yards and 13 TDs despite appearing in just SEVEN games.

Battle Creek’s pair of losses came from Norfolk Catholic and Ord. Also remember, the Braves have actually played only 9 games, having received forfeit wins over Ponca and GICC.

I cannot think of an 11-Man football team other than the Ord Chanticleers that has suffered more injuries to key skill position players, yet is still in the running for a state title. Entering the 2022 season, super coach Nate Wells had a returning all-state QB in Dylan Hurlbert (1,244 rushing/22 TDs and 894 passing/15 TDs), plus a speedy, elusive junior back in Aidan Ryschon returning as the GO-TO back. Things looked rosey for the Chants in Pre-Season 2022, BUT.

Not so fast, my friend. Ryschon goes down in the first game and Hurlbert is knocked out of action during Game 3. Now what?

Not a problem. Coach Wells inserts another junior running back named Trent McCain. All McCain has done in 11 games is run for a massive 1,908 yards and 24 TDs after gaining just 154 through the opening two outings. The amazing McCain has 9 straight 100+ yard games, four of which were over 200 yards.

Another junior, Blake Hinrichs has stepped in at QB for the injured Hurlbert and thrown for 641 yards/7TDs and run for 870 yards with 15 more scores. The dude actually has a shot at a thousand yards rushing after beginning the season as the JV quarterback

The Chants also suffered yet another blow when leading pass receiver Talon Bruha suffered a season ending injury in Ord’s first playoff game. Bruha had 397 of Blake Hinrichs 641 total passing yards this season before retiring to the sidelines in street clothes.

The mainstay of this Ord football team is the senior-laden, veteran O and D-Lines. With two time All-State stud Ryan Gabriel (113 tackles with 80 SOLOS) prowling the defensive lanes, the Chants are just incredibly solid upfront. Don’t be fooled into thinking Gabriel couldn’t play at the Class A level and stand out, because #50 is certainly on my radar for a spot on my 1st Team Super-State Team.

Well, you just do not get any better Head Coach than my Class of 2020 Nebraska High School Sports Hall of Fame mate, Jeff Bellar. There is nobody better, and this year’s version of his Norfolk Catholic team has been the fevorite to win it all in C-2 since the beginning of the 2022 season.

The Knights also have one of the stingiest defenses in C-2, giving up just 210 yards a game. Only Battle Creek has been better in that department to date, and Catholic beat them 28-7 on the 29th of September.