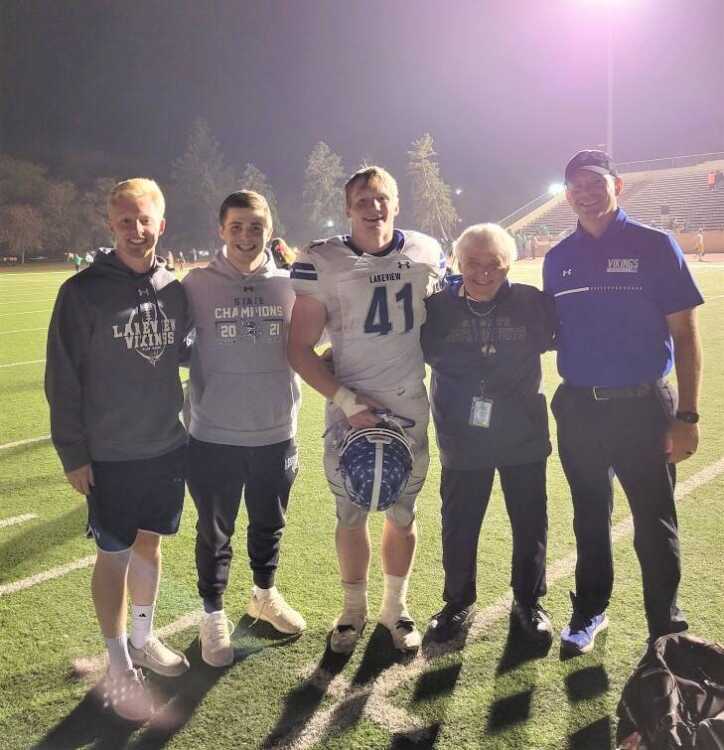 Coach Kurt Frenzen, who had been limiting Landon Ternus to around 10 carries a game, turned the 5-11, 205 pound running back loose for 147 yards on 24 carries and a touchdown in the regular season finale for both squads.

Ternus followed an offensive line that outweighed Scotus by an average of 39 pounds per man to a memorable performance, as he dragged Scotus tacklers for

When Ternus, who has deceptive speed, wasn’t making life tough for a very good Scotus defense, senior classmate Owen Bargen was doing the same, as the 5-9, 160 pound senior twisted, turned and knifed his way for 93 yards on 13 carries.

Both defenses sparkled in the opening quarter, as Lakview forced a 3 and out on the Shamrocks initial drive of the contest, and the Rocks halted a Lakeview drive at the Scotus 19 yard line.

Scotus made some progress on their second possession, only to see a pair false start penalties cause the Rocks to spin their wheels everytime they gained some meaningful yards.

The Shamrocks finally were forced to punt from their own 44 yard line and sophomore Cohen Pelan unleashed a howitzer boot that carried all the way to the Lakeview 13 yard line.

It was at that point, with 1:53 left in the first stanza, the Vikings clinic on ball control kicked in.

Lakeview, who threw the football just 8 times all night, mixed the pass and run to fashion a beauty of a 87 yard, 11 play scoring drive that consumed 4 minutes and 33 seconds off the clock. 6-2, 190 pound quarterback Brenden Sloup entered the game to complete the drive with his 1 yard scoring plunge, his first of three one yard touchdown runs of the night.

The home field Shamrocks nearly answered right back on the ensuing drive. Beginning on their own 34, Scotus moved right down the Pawnee Park turf, maneuvering their way through the eerie ground fog.

The Rocks overcame another pair of false start infractions, advancing all the way to the Lakeview 20 yard line. Trenton Cielocha nearly had himself a touchdown pass on the following play, but Lakeview was whistled for a pass interference call in the endzone and Scotus was in business with a first and goal at the Vikings 10 yard line.

A pair of Henry Ramaekers 3 yard runs had Scotus in position to tie the game up at seven apiece, only to see the Shamrocks be flagged for a drive-killing 15 yard blocking below the waist penalty.

Facing a 2nd and 22 situation, Trenton Cielocha tried to thread a pass between a couple of Lakeview defenders, only to see it picked off to thwart the drive.

The real backbreaker in the game for Scotus came on Lakeview’s opening drive of the third quarter. That’s when Kurt Frenzen decided to ride the powerful legs of Landon Ternus. The bruising Ternus, who had just 30 yards on 8 totes in the first half, went to work punishing the Scotus defense with his bruising runs.

The Lakeview offense consumed 4:21 of the third quarter on the textbook 10 play drive that ended with another Brenden Sloup 1 yard scoring blast.

This was still a ball game heading into the 4th and money quarter, with Lakeview up just 14-0, but the Vikings once again turned to Ternus, who led his team to another time consuming drive (4 minutes, 44 seconds).

Ternus' 7 yard touchdown run capped the drive and now the Vikings had a commanding 21-0 lead with 8:04 left in the game.

SCOTUS wasted no time in answering the Ternus touchdown run, in fact one minute right on the dot. Slick senior quarterback Trenton Cielocha then called the play, took one step back after receiving the snap from center, then raced 59 yards for a touchdown, bringing the Shamrock faithful back to life.

Cielocha booted his own PAT through the uprights and the Rocks were back in business, but when the ensuing onside kick traveled less than 10 yards, Lakview was right back in business with a first down at the Scotus 44 yard line.

Nine plays later, QB Brenden Sloup followed his tight formation, O-Line for his third one yard touchdown, and the game was out-of-reach at 28-7 with a minute, 38 seconds left in the contest.

Landon Ternus led all rushers with 147 yards on 24 carries. Owen Bargen added 93 yards on 13 totes, while senior Brenden Sloup made the most of his 10 yards on 6 carries with three scoring runs. The 190 pound quarterback came in the game only when Lakeview needed a first down or touchdown, going 6 for 6 in that department….THREE touchdowns and SIX first downs.

Lakeview quarterbacks completed 5 of 9 passes for 63 yards to go with the Vikings 279 yards on the ground.

Scotus was led by Trenton Cielocha’s aerial and rushing game. The Shamrock senior completed 12 of 17 passes for 113 yards and rushed for another 67 yards on just 7 touches. Hard running sophomore Henry Ramaekers chipped in 48 yards on 10 attempts, while 190 pound senior Jackson Faust added another 33 yards on 8 totes, all coming on jet sweeps.

Lakeview concludes the season with a 7-2 record while Scotus ends at 6-3. Both teams now await the postseason playoff pairings to be released Saturday morning to find out where they will play next Friday.

Lakeview appears to be headed for a 7th seed, which would create a rematch with Wahoo. Scotus, who is currently listed as the 16th and final seed, would be looking at a trip to Aurora to face the #1 seeded Huskies.

Those predictions are very unofficial, as you can guess.