Central Valley races to a 52-6 win over O’Neill St. Marys. 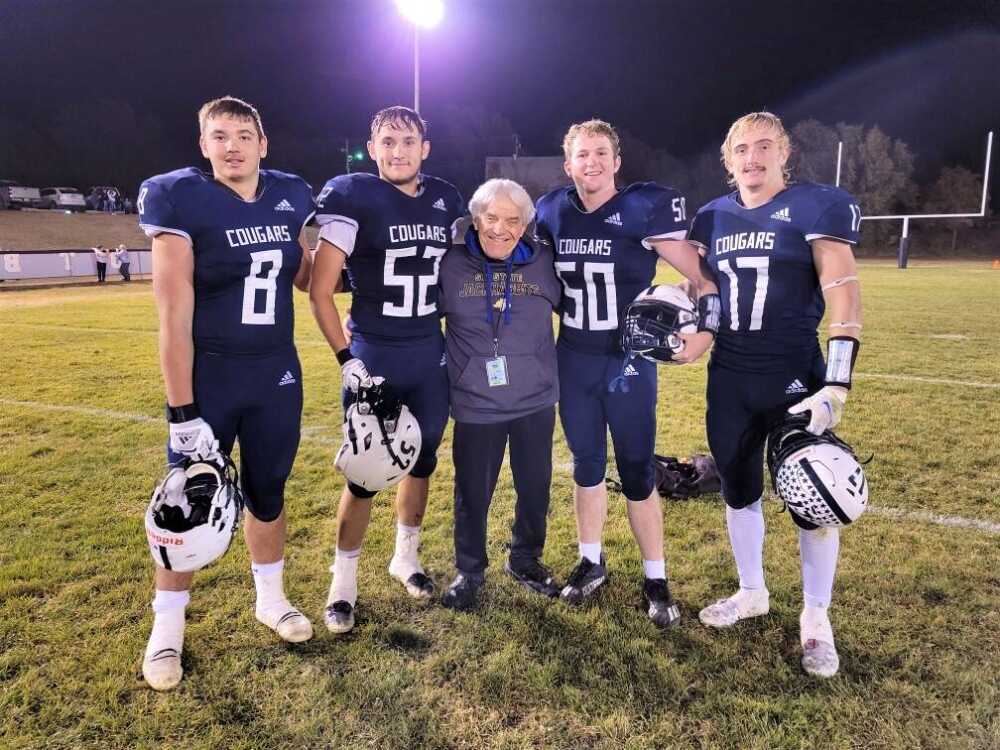 It was the Zander Wolf show tonight in Wolbach, as the 5-11, 185 pound senior exploded for 301 yards on 23 carries and FIVE rushing touchdowns, allowing the Central Valley Cougars to overwhelm O’Neill St. Marys 52-6 in the opening round of the Class D-1 football playoffs.

Wolf and his Interior Offensive Line of Treyven Straka, Keean Benson and Cohen Grossert, left no doubt which team had the edge in athleticism, as the Cougar senior runner zipped to 256 yards rushing and accounted for all five Central Valley scores in the first half.

St. Marys, who found itself trailing 36-0 at the halftime break, never did get untracked, racking up just a meager 132 total yards for the entire game. Freshman quarterback sensation Gage Hedstrom, who came into the game with 1,211 passing yards and 591 more on the ground, ran for his life most of the evening and the passes he did complete were mostly of the short gain variety due to the relentless pursuit of the swarming Cougar defense.

Central Valley, who boasts a roster of 28 players compared to the 15 man roster for St. Marys was just too deep for the visiting Cardinals, whose only losses during the regular season were to unbeaten Ainsworth (36-30) and Wausa (32-20).

This Cougars deep roster allows Head Coach Chip Bartos to platoon a quartet of players who play exclusively on defense. One of those defenders, 5-8, 160 pound senior Ty Landers (#2), was a monster roaming the defensive spaces for Central Valley, applying crunching stops to Cardinal ball carriers and pass receivers all night.

Landers and sophomore Grady Kelly (#5) were beasts, bringing the wood on defense, as were seniors Keean Benson (#52) and Zander Wolf (#17).

By halftime Central Valley, who had built that 36-0 lead while holding St. Marys to 22 total yards, caused a running clock to be in effect for the entirety of the final two quarters.

Central Valley was led on the ground by Zander Wolf, who danced his way to 301 yards on 23 carries and five touchdowns. Wolf increased his 2022 rushing total to an unofficial 1,628 yards with 35 touchdowns.

Wolf is as fast as anyone I’ve seen this season in the 8-Man ranks with the exception of Osceola state sprint king Isaiah Zelansey, and is a nightmare to bring down anywhere on the field.

Wolf is a master at keeping his legs churning, which results in a ton of yards after contact.

The Cougars ended the night with 433 total yards of offense and did not need to utilize the expert passing skills of junior quarterback Dierks Nekoliczek, who can fling it with the best of them with pinpoint accuracy, although Nekoliczek did complete 5 of 6 aerials for 83 yards and a pair of touchdown tosses, one to Zander Wolf and the other to sophomore Boston Wood.

In 8 games during the regular season by the way, Dierks hit 57% of his throws for 704 yards and 14 touchdowns with one lone pick.

Gage Hedstrom led the way for St. Marys tonight, hitting 13 of 25 passes for 68 yards and one touchdown while also adding 37 yards rushing on 10 totes.

Now the Cougars, who boast an all-star coaching staff that includes longtime former head coach Jess Rother, former Husker great Steve Kriewald along with Nolan Kratzer, Jason McIntyre and Shane Ryan. will now await the NSAA to re-seed the 8-Man brackets before finding out who their next opponent will be next Friday.

From what I witnessed tonight, nobody is going to want to draw this Central Valley football team in the next round of 16 in the 8-Man football playoffs.