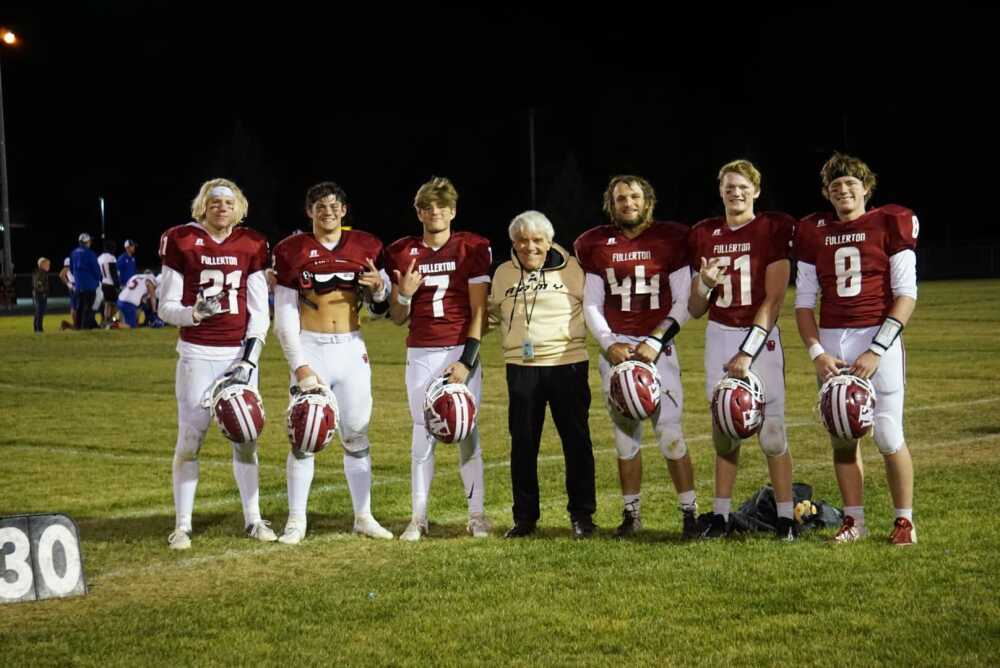 These 2022 Fullerton seniors have overcome much adversity to gain a berth into the postseason playoffs. *(photo courtesy of the talented Cathy Cook)

Sophomore QB Fletcher Dubas, a real Warrior in every sense of the word, completed 4 of 5 passes for 87 yards and a pair of scoring tosses to Tyler “Sure-Hands' ' Gochenour (37 yards) and Brady Cook (14 yards). Dubas also rushed 12 times for 72 yards with TD runs covering 7 and 24 yards.

Fullerton will travel to Osceola this Thursday for a rematch with the Bulldogs in the opening round of the Class D-2 playoffs.

*Jace Chrisman-Grand Island Senior High - Was a driving force on both sides of the football in the Islanders big 31-21 win over Omaha North on the road. The GI senior Captain exploded for 184 yards on 28 carries and touchdown runs 9, 41 and 4 yards to pace the offense. Jace now has 872 yards rushing after 8 games.

On defense, Chrisman recorded 8 tackles, 3 for losses with 2 being sacks. Riley Plummer also made 6 tackles, 5 of which were solos. Riley Marsh also sent shockwaves through the Omaha North crowd with his 88 yard kickoff return.

Nobody is going to draw this Grand Island team in the opening round of the playoffs.

*Cole Ballard, Storm “D” - Ballard “stormed” the Omaha Burke defense for 210 yards and 5 touchdowns on just 10 carries in Elkhorn South’s 55-14 win over Omaha Burke, and that was just in the first half before retiring for the night.

Cole broke loose for TD runs of 20, 69, 4, 1 and 20 yards in that opening half and added a 7th and 8th touchdowns on a 72 yard pass reception and a 32 yard punt return. Seven touchdowns in 24 minute of work isn’t too shabby, and also apparently ties a record of some kind. All that effort gave the All-State candidate 338 total yards for half a night’s work.

Hats off to the entire Elkhorn South Defense, who limited the Bulldogs to 11 yards rushing for the game. They also recorded 5 sacks and an interception.

Pretty salty bunch, this St. Cecilia football team. So solid they will make a deep, serious playoff run that may lead them to Memorial Stadium in Lincoln on a Tuesday in late November.

*Trevor Thomsen-Summerland - Three-Time 1000 yard rusher rambled for 176 yards and three touchdowns on just 15 totes to raise his senior season rushing total to 1,264 yards (17 TDs). Trevor has accumulated an amazing 4,386 yards with 58 TDs during his 4 year varsity career that began in Clearwater his freshman season. Thomsen has 5,835 total yards and 72 career tackles for Summerland, who will face Bridgeport in a very appealing opening round Class D-2 playoff game this Thursday.

*Zander Wolf-Central Valley - Wolf rolled for 185 yards on 25 carries and 5 touchdowns in Central Valleys 60-24 win over a pretty solid Twin Loup squad. Zander has been the Real Deal during the regular season up there in Wolbach, scorching the turf for 1,327 yards with 30 TDs.

If you attend this game (7:00 pm kickoff), you will be treated to the Golden Public Address voice of the great Ed Smyth, one of the best in the business these days.

*Anthony Rezac-Omaha Westside - Was Money in the Warriors exciting 41-34 overtime victory over Millard South and that may be an understatement. Check this out. Anthony completed 19 of 26 passes for 286 yards which included a 14 yard scoring toss to speedy Jalen Lloyd and a 5 yarder to Trevor Spady.

Can you say Dual-Threat Quarterback?

Ty Keifer was also a force in the contest, picking off a pair of Cam Kozeal passes.

Hayden Frank has been quite the story for the undefeated Clippers this season, passing for 1,085 yards with 11 TDs and just 2 INTs, and rushing for 820 more yards with an additional 20 touchdowns.

*Ben Ely-Red Cloud - Made life miserable for Wilcox-Hildreth Friday afternoon with his 180 yards and 7 touchdowns on 24 carries in the Warriors 6-Man, 72-20 win over Wil-Hill. Ely scooted for scoring runs covering 3, 1, 16, 10, 1 and 47 yards with a 49 yard kick return touchdown thrown in there.

Ely was also a monster on defense, making 13 tackles ( 3 solos).

*Cal Newell, Cooper Jackson, Cole Luedke-Lincoln Southwest - The 6-1, 195 pound senior did all he could to aid the Silverhawks in a heartbreaking 27-23 overtime loss to Millard West. Newell jetted for 268 yards on 34 carries and all three Lincoln SW touchdowns in the loss, giving him 1,100 yards for the year with 16 touchdowns.

Wow! It’s been a decade since Lincoln Southwest had a thousand yard rusher. Yep, 2012 to be exact was when the great Josh Bandaras rolled for 1,237 yards.

The Silverhawks also had some slobber-knockers on defense, namely Cooper Jackson who made 12 tackles (3 solos) and had a fumble recovery, and Cole Luedke, who made half a dozen stops.

Mr. Luedke, incidentally loves to make frequent visits to the opposing team’s backfield, recording 14 tackles for losses out of his total 44 stops this season and this is an unwanted visit considering the dude checks in at 6-2, 245 pounds and eats a bushel of 8 penny nails for a pre-game snack.

*Trevon Weedle-West Point-Beemer - The 6-0, 160 pound Weedle and his O-Line must be shining stars for this 2-6 football team the past three games. Trevon broke for 193 yards on 16 carries and a 96 yard TD gallop in West Point-Beemers 21-16 loss to O’Neill.

*Maverick Hagemann-Elkhorn Valley - Junior RB ran for 225 yards and three touchdowns on just 14 carries in the Falcons 32-26 loss to Plainview. That gives Hagemann 918 rushing yards in 8 games for Elkhorn Valley, who enters the Class D-1 postseason with a 3-5 record and a trip to North Platte to face #1 seed North Platte St. Pats on Thursday.

*Gatlin Reimers-Palmer - Carries on the tradition of the tough-guy Reimers brothers with his big 245 yards on 35 carries and 4 touchdowns in the Tigers season ending 36-16 win over Giltner. The defensive ace finishes the season with 1,044 yards rushing and a massive 154 tackles (75 solos).

*Danny Kaelin-Bellevue West - Division One recruit keeps rolling along with his sensational aerial game. The junior gunslinger completed 19 of 32 passes for 306 yards and 4 scores in the Thunderbirds 49-0 shellacking of Bellevue East. That gives Danny 2,395 yards through 8 games with 26 TDs and just 6 picks.

*Trent McClain-Ord - Was outstanding in the Chants 42-7 win over a good Broken Bow team. McClain rushed 26 times for 156 big ones including touchdowns from 3, 11 and 14 yards out, raising his season rushing total to 1,228 yards with 15 TDs. Trent also made 9 tackles on defense.

*Breckan Schluter-Exeter-Milligan/Friend - 8-Man football rushing leader raced for 195 yards on just 8 touches with scoring runs of 40, 15 and 37 yards in the Timberwolves 56-0 whitewashing of Southern. The powerful running junior finished the 8 game regular season with 1,691 yards (211/per game) and 30 TDs.

EMF will travel to Henderson Thursday to meet Heartland in the first round of the Class D-1 playoffs. Kickoff is 7 PM.

Here’s the deal with Isaiah Zelansey. The dude has played in just THREE games but managed 629 yards on 32 carries (19.7 yards a pop) and 11 TDs. Incredible.

Kale Gustafson has kept this Osceola team competitive on offense with his 1,294 yards and 23 TDs and 427 passing yards with 8 touchdowns (NO INTs). He is also a headhunter on defense, making 85 tackles, recovering 2 fumbles and pirating 4 passes.

Osceola entertains Fullerton in the opening round of the D-2 playoffs, which begin on Thursday. Kickoff is slated for 7:00 PM.

*Carson Bloom, Klayton Kleffner, David Luzano, Caidyn Carraher, Drew Carraher-Riverside Chargers - In the Chargers big 28-6 win over Ravenna; Carson Bloom ran for 100 yards on 11 carries with a pair of TDs (3, 58 yards) and registered 8 tackles on defense with one sack and an interception. The high leaping Klayton Kleffner had 4 pass receptions for 63 yards and a touchdown (21 catches/486 yards/11 TDs during regular season) and 9 stops on defense.

Team Captain and All-State candidate David Luzano made 10 tackles on defense (5 solos) and cleared the way for the ground game from his offensive center position. Caidyn Carraher has 12 stops and two interceptions on defense, while slick QB Drew Carraher connected on 8 of 14 passes for 124 yards and the TD toss to Kleffner.

*Nolan Beccard-Nebraska City Lourdes - Completed 13 of 18 passes for 170 yards and three touchdowns in an unheard of 40-0 shutout of Falls City Sacred Heart. He also ran for an additional 56 yards on 11 carries and another score.

Junior Miles Poppleman was on the receiving end of two of Beccard’s TD tosses covering 1, 66 yards, while Vance Weninger latched on to the other from 8 yards out.

Lourdes CC will enter the Class D-2 postseason with a 4-4 record and a Thursday trip to powerful Lawrence-Nelson. Kickoff is slated for 5:30.

*Wiley Ziegler-Bloomfield - Tied an NSAA record for most Kick/Punt Returns in a Career (14) wne he brought back a kick 69 yards for a score in the Bees 44-30 loss to Wynot. The shifty Bloomfield JUNIOR now has 6 kick and 8 punt returns during his still active 27 game career. He has also rushed for 1,193 yards during the regular season.

Bloomfield is a very dangerous football team with a history of playoff success and the distinction of having the most 1000 yard rushers in the entire state of Nebraska since I began keeping records. Love it!

The great Luke Kasten has 931 yards on the ground with 24 touchdowns with one regular season 6-Man game remaining before the postseason.

All 3 of Garrett’s scoring passes went to his favorite target, Jonny Puelz. The TD tosses covered 24, 7 and 27 yards.

Garrett Hoefs and Jonny Puelz have been a lethal pass/catch combination in 2022 with Hoefs hitting 63% of his 217 pass attempts for 1,782 yards and 20 TDs. Jonny Puelz has caught 55 passes for a massive 850 yards and 14 touchdowns.

*Jackson Mettler-Battle Creek - Completed 11 of 13 passes for 153 yards with touchdown passes to Blake Borchers (5 and 7 yards) and Will Hamer (22 yards) in the Braves 42-6 win over West Holt.

*Quinn Bailey-Chadron - Highly touted sophomore ran for 120 yards on 22 carries and three TDs in the Cardinals 42-0 win over Alliance. So this season, Quinn Bailey has 948 yards rushing (11 TDs), 140 receiving yards and a kick return touchdown for Chadron.