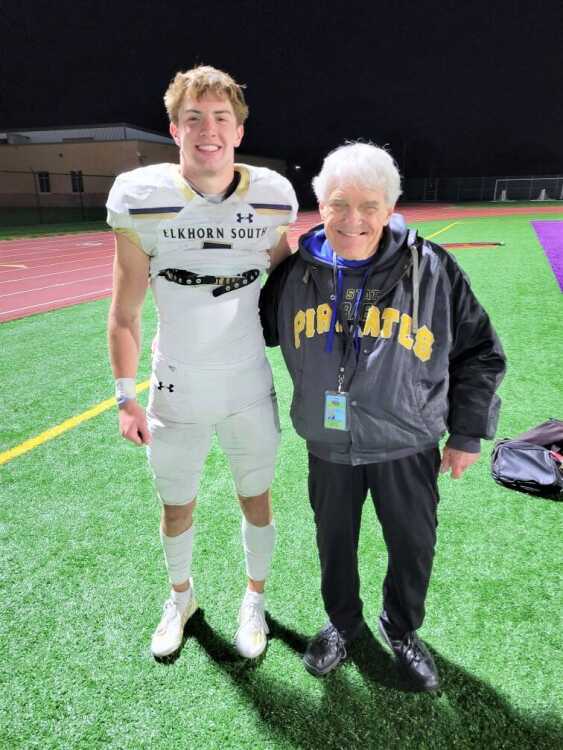 This young man is Elkhorn South RB/DB, Cole Ballard, who I believe if the best running back in the state at this time. SO much talent on this Storm football team, from the coaching staff down to the backups.

Rauer tormented a skilled Grand Island defense to the tune of 162 yards on 10 carries, which included an electrifying 84 yard touchdown run. Rauer was also nearly perfect in the passing department, connecting on 6 of 7 throws for 133 yards and a 36 yard TD pass to Jackson-Moeller-Swan.

Cole Ballard, arguably the state’s best running back, was just solid gold with his 133 yards on 15 carries with three TD runs covering 3, 1 and 8 yards.

The great Maverick Noonan has his usual “normal” game on defense, making half a dozen tackles, two of which were TFL and a recovered fumble.

I can tell you right now that Maverick Noonan has about as quick a first step as any defensive linemen I have seen during the past 10 years. Very intelligent and just relentless on every single play, and with such strong hands at the point of attack. Very few offensive players can keep him from stalking the ball carrier and making the stop.

I might also mention that Noonan is probably as good an Offensive Linemen in the state as you will see.

Maverick Noonan is an extraordinary talent who is one of the EDGE players best to come out of this state in years and you can take that to the bank.

*Hayden Frank-Malcolm - Mother -of-Mercy, talk about a career game for Clippers QB Hayden Frank! The senior certainly pulled one off in Malcolm’s 51-34 victory over a strong Lincoln Lutheran last Friday.

You know, Lincoln Lutheran jumped out to a 14-0 lead eight minutes into the first quarter, so the comeback by the now 7-0 Clippers proved that this bunch can hang with some pretty salty Class C-2 competition.

*Carlos Collazo-Aurora - The virtually unstoppable Carlos Collazo ran for 173 yards with touchdown runs of 16, 83 and 17 yards in the Huskies 41-7 win over a very fine Adams Central team. Collazo, who had 2,022 yards a year ago, has an unofficial 1,410 yards with 27 touchdowns thus far in 2022 with two regular season games remaining and a more than likely four post-season games on the horizon.

Tate has rambled for 840 yards after 7 games.

Big Ben now has 812 yards receiving with 12 touchdowns for the year and an unbelievable 2,798 yards with 36 TDs thus far in his illustrious career.

*Bryce Knapp-St. Paul - Wildcats QB picked a great time to have a breakout game for St. Paul. In the ‘Cats 56-21 win over Fairbury, Knapp exploded for 330 yards on 20 carries with TD runs of 4, 42 and 16 yards in the rout. Now, the weird thing about that, is the fact that Knapp has previously rushed for 224 yards on 79 totes with NO TDs.

Whatever Mr. Knapp did differently against Fairbury should be bottled up and re-opened next week when the Wildcats meet Central City.

*Jared Kuhl-Platteview - Senior QB was money on 14 of 22 passes for 240 yards and 3 touchdowns in Platteview's 35-0 blanking of Omaha Concordia. Two of Kuhl’s touchdown strikes went to classmate Ezra Stewart (6 catches/81 yards), the other going to Alex Draper (4 catches/84 yds), also a classmate of Jared Kuhl.

Jared, who has 1,109 yards passing with 15 TDs and just ONE interception through 7 games, completed passes to seven different receivers in the Concordia victory.

Kuhl has 3,017 yards through the air with 30 TDs thus far in his sparkling 29 game career at Platteview. He also has a Super Head Coach in Mark McLaughlin

*DeShawn Tolbert, Alexander Tapia-Omaha South - Big 6-1, 235 pound QB DeShawn Tolbert was on fire in the Packers 57-22 win over Omaha Northwest. Tolbert sizzled on 13 of 15 passes, good for 319 yards and 4 touchdowns, all 4 going to Alexander Tapia. The Tolbert to Tapia scoring hookups covered 2, 1, 15 and 60 yards.

Tolbert, one of the Omaha Metro’s best passers, now has 1,746 yards with 18 TDs in 6 games. Alexander Tapia, a running back for the Packers, had 104 yards and a pair of TDs on 10 carries in the win over Northwest. The scoring runs covered 1, 6 yards.

Trent McCain stepped things up when 1000 yard rushing/passing quarterback Dylan Hurlburt went down in game three against Battle Creek. McCain’s ground game totals have increased every single game up to this Kearney Catholic win, going from his 113 yards vs. Battle Creek to 143 (Gordon-Rushville) to 179 against Gibbon to 275 yards vs. Amherst to his 219 here.

Looks to me like the Ord Chants are rolling right along, with a single loss coming to C-2 favorite Norfolk Catholic.

*Quentin Morris-Centura - Ran for 139 yards on 32 carries and both Centurions TDs in a 24-12 loss to an improving Amherst team. The punishing runner now has 1,074 yards in just 7 games and becomes just the 7th thousand yard rusher in Centura school history.

*Owen Hancock, Barrett Lavaley-Wahoo - QB Owen Hancock was a deadeye passing the football in the Warriors 31-10 win over Scotus. Owen connected on 15 of 19 aerials for 165 yards and three touchdowns, two of which were grabbed by Barrett Lavaley (12, 12 yards).

Owen also ran for 41 yards on 7 carries and a 1 yard touchdown run.

*Carson Tromke, Kohen Grindle-Cambridge - Carson Tromke, the Trojan’s slender 6-0, 150 pound QB, was 9 for 12 passing for a fat 256 yards and Six TDs in the 69-42 win over Bayard. Kohen Grindle provided the ground attack with his 164 yards and two touchdowns on just 11 carries.

Will Taylor caught 3 passes for 94 yards, all going for touchdowns. Grindle also pulled in three passes for 107 yards with two good for TDs. Junior Ty Stanton had one catch for 22 yards and a touchdown, while also adding 100 yards rushing with a touchdown.

*Zach Lewandowski - Ravenna - Bluejays quarterback cracked the 1000 yard rushing mark with his 215 yards and three TDs on just 14 carries. The sensational senior signal caller also was 4 for 6 passing for another 117 yards and an additional 3 TDs in Ravenna’s big 58-15 victory over Arcadia/Loup City.

Zach Lewandowski escaped for touchdown sprints of 54, 33 and 48 yards in the game, while completing scoring passes to Chase Rager (39, 45 yards) and Caden Larsen (27 yards).

Lewandowski now has 1,011 yards rushing and 645 yards passing with 11 TDs and NO interceptions

*Noah Eggleston, Kellen Eggleston-Sumner-Eddyville-Miller - QB Noah Eggleston was on his game in the Mustangs big Six-Man, 54-36 win over Red Cloud. Noah completed 19 of 27 passes for 368 yards and five TDs. Kellen Eggleston, who had 6 receptions for 90 yards, caught a pair of scoring passes from Noah, Jayson Guthard had 2 catches for 97 yards and a TD, Ryan Arbuthnot grabbed 4 passes for 55 yards with a TD, while Cohen Rohde had one catch, good for a 55 yard touchdown.

*Gage Hedstrom-O’Neill St. Marys - Gage Hedstrom, 8-Man football’s top Freshman, was simply outstanding in the Cardinals close 36-30 loss to an unbeaten and powerhouse Ainsworth squad. Young Gage was 15 of 27 for 208 yards and 3 touchdowns. Hedstrom also rushed 23 times for 57 yards and a touchdown and made 12 tackles on defense.

The amazing O’Neill St. Marys Freshman has an unheard of 124 tackles (37 solos) on defense through 7 contests and is averaging 40.8 yards per punt on 9 punts for the 5-2 Cardinals.

*Josh Basilevac-Elkhorn North - Do-it-all junior quarterback was a shining star in the Wolves 27-24 win over Mount Michael. Basilevac, a real Master of Trickery with a football in his hands, rushed 23 times for 150 yards with a TD and completed 10 of 14 passes for 126 yards and a score.

Basilevac, who has 1,189 yards passing (12 TDs) and 465 yards rushing (8 TDs) is talented enough to run for a thousand yards if things were to lay right in the Wolves offense.

*Braylon Anderson-Oakland-Craig - 6-3, 195 pound sophomore quarterback carved up the Tekamah-Herman defense in Oakland-Craig’s 61-6 win over the Tigers. Anderson was 17 of 19 passing for 329 yards and FIVE TDs in the lopsided win, elevating his 2022 passing yards total to 1,262 yards with 11 TDs.

Oakland-Craig is currently 5-2, with its only losses to unbeatens Norfolk Catholic and Malcolm. This is a dangerous football team.

*Kyle Peterson-Raymond Central - The 5-7, 175 pound junior RB has really exploded the past two weeks. In Raymond’s 33-30 win over Nebraska City, Peterson tore up the Pioneers defense with 274 yards on 24 carries with a pair of touchdowns. A week ago, Kyle raced for 143 yards and two TDs on 17 carries. That’s 419 yards on 41 carries with 4 touchdowns the past 8 quarters for Kyle Peterson.

*Kyle Krajicek-Yutan - Romped for 153 yards and 4 touchdowns on just 9 touches in the Chieftains 56-7 win over David City High.

*Trev Peters-Henderson Heartland - Speedster quarterback raced for 192 yards and two TDs on only 9 carries in Heartland’s 76-14 win over Superior. That’s 21.3 yards a pop, friends. Trev Peters is just 98 yards away from the one thousand yard rushing plateau with one regular season remaining at 0-7 Pleasanton and a likely postseason berth lying ahead.