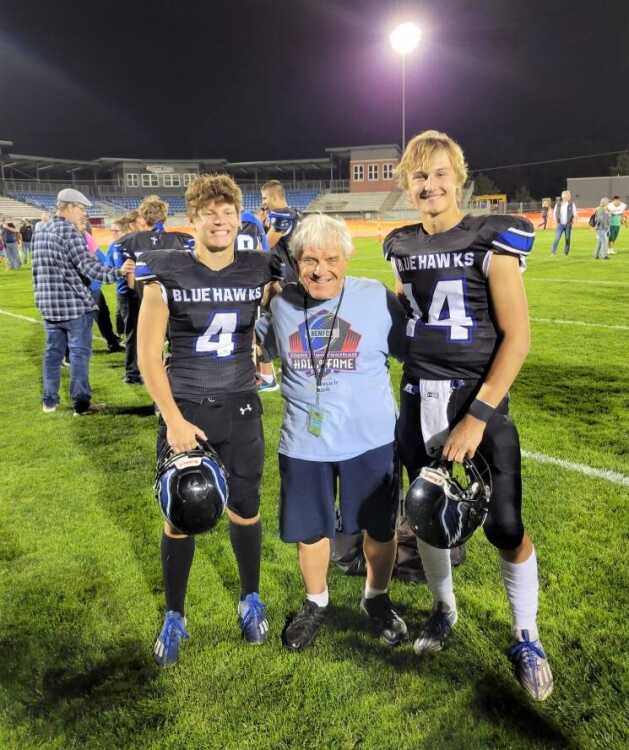 Hastings St. Cecilia stars Cooper Butler (L) and Carson Kudlacek (R) are as good as it gets in Class C-2 in the state of Nebraska.

Senior QB Carson Kudlacek was sharp, hitting 17 of 21 passes for a monster 313 yards and three touchdowns. Kudlacek also slipped away for 61 yards rushing on 9 carries.

Renaissance Man Cooper Butler caught 6 of Carson’s passes for 167 yards and a pair of fabulous first quarter scoring receptions covering 36 and 63 yards and also made an interception on defense.

Jensen Anderson snagged 5 passes for 87 yards including a 51 yard TD reception. The explosive Anderson also returned a kickoff 87 yards for a touchdown following Kearney Catholic’s lone score of the night.

SPEED, O-LINE! That’s what this roster of just 27 players owns and you might just add a head coach that knows what it takes to win.

*Cale Gustafson, Isaiah Zelasney-Osceola - First year quarterback Cale Gustafson ran for 144 yards on 16 tries and a pair touchdowns in the Bulldogs 66-36 win over a pretty good Fullerton team. Those 144 yards by the Bulldogs junior elevated him over the one thousand yard rushing mark (1,029 yards) in his 1st year at the QB position.

In equally big news, Class D’s fastest human Isaiah Zelasney returned to the Osceola lineup in a huge way after missing the first 5 games following summertime shoulder surgery. The 6-Time State Sprint Champion looked surprisingly fit in rushing 12 times for a monster 280 yards and 5 TDs. The other really remarkable thing was Zelasney operating out of the running back position, although it always made sense.

So now, how dangerous does Zelasney’s return make this Osceola Bulldogs football team entering the stretch run of this 2022 Class D-2 football season? One of the most disturbing sights for an Osceola opponent has to be Cale Gustafson and Isaiah Zelasney rolling out with the ball together with the football in Cale’s hand, but also positioned in Isaiah’s midsection.

Which speedster gets the ball? Pick your poison and pray you don’t fall for the fake.

When Grand Island QB Cohen Evans did take to the air, he was 7 of 14 for 64 yards, but two of those seven aerials were good for TDs (9, 12 yards) to TE Cole Thorne.

Okay, the defense wasn’t bad either, with Alex Dzingle and Reece McBride each gobbling up a Kearney fumble. Dzingle also had 6 tackles, one being a sack.

*KJ Schenck, Cooper Fedde-Elkhorn High - Kicked off their series with Elkhorn North with an unexpected 49-35 shootout victory over a very talented Elkhorn North squad. It was a Mark Wortman-type offensive game plan, powering out a massive 453 yards on 47 attempts.

*Parker Borer, Alex Christo, Jaxon Lipker-Boone Central - In the Cardinals 55-7 win over Wayne, Parker Borer ran 12 times for 170 yards and a pair of touchdowns, QB Alex Christo completed 7 of 13 passes for 103 yards and 3 TDs, while 6-5, 170 pound Junior Jaxon Lipker not only caught a 21 yard TD pass on offense, but registered 7 tackles on defense, had 1 TFL and a recovered fumble. Lipker has 26 tackles for the season, of which 20 are solo stops.

How do you stop this dude?

Wolf was very close to the thousand yard rushing mark a week ago, but should definitely be well over the mark right now.

*Trent McClain, Blake Hinrichs-Ord - McClain, a 5-11, 175 pound junior, toted the football a grueling 52 times for 275 yards in the Chants come from behind 41-10 victory over Amherst. That had to be quite a shock to the Chanticleer junior, considering the fact he has carried the rock just 40 times during his freshman and sophomore seasons.

You are probably thinking Trent McClain had the majority of Ord’s rushing carries, but that would NOT be the case. Blake Hinrichs had 26 carries for 162 yards and three touchdowns in the game. That increases Hinrichs season rushing total to 854 yards.

*Colton Tilford-North Platte - Ran roughshod through Class A #1 Omaha Westside’s defense to the tune of 197 yards 16 carries and two touchdowns in the Bulldogs upset of the top ranked Warriors. Tilford, a thousand yard rusher a year ago, has an unofficial 660 yards after 6 games in 2022. Very punishing runner.

*Drake Lally-Sandy Creek - The junior running back has come alive the past two weeks for the Cougars, rambling for 383 yards on the ground. In last Friday’s 74-30 win over Southern Valley, Drake Lally bolted for 235 yards on 22 carries with 5 touchdowns. He also caught a trio of passes for 69 yards and two more scores in the rout.

I have Lally at 787 yards rushing right now.

You want to talk about some tackling technique, this McCook Bison knows the ins and outs of that drill! Out of 449 total tackles this season, an unimaginable 345 of those tackles were solo stops. That’s a bruising 77%. Those dudes know how to tackle!

This is a very fine football team that is now playing in Class C-1, so the chance of a Mccook/Aurora, McCook/Pierce battle is on the horizon. Now, you will not have to wait long for a McCook/Adams Central matchup. That’s coming in 11 days at Adams Central on October 14th. Yes, I’m there.

*Lance Brester-Howells-Dodge - Shredded Humphrey St. Francis defense with his 279 yards rushing and 4 touchdowns on 26 carries in the Jags 44-8 win. Brester’s yardage shot him over the 1000 yard mark, placing him at the 1,263 yard mark after 6 games. Lance Brester becomes the 23rd thousand yard rusher for Mike Spiers up there at I-Back High North.

So good to see Hampton making some headlines on the gridiron. Those people take great pride in their school and wonderful community.

*Hudson Hoffman-Boyd County - Fired off 236 yards on 28 carries and three TDs in Boyd’s exciting 30-28 win over Niobrara-Verdigre. Hoffman’s scoring runs came from 52, 16 and 28 yards away.

*Ryker Evans-Hi-Line - 6-0, 165 pound junior star rushed for 126 yards and 4 touchdowns on 22 carries and made 9 stops on the defensive side and recovered a fumble to help lift his team to a resounding 60-28 win over Arapahoe.

*Hyatt Collins, Jaxon Gangwish, Nick Conant, Leighton Weber-Adams Central - Collins made the best of his carries during the Patriots 34-3 win over St. Paul. The two-time 1000 yard rusher carries just 4 times for 130 yards, but three were good for touchdowns. That gives Hyatt 638 yards and 14 TDs for the season to date.

Jaxon Gangwish (#55) had another monster night on defense, making 12 stops, 6 being solos, while both Nick Conant and Leighton Weber added 7 tackles each. All four of these A/C players are very strong All-State candidates on my watch.

*Tanner Frahm-Plainview - This young man really showed off his talent in Plainview’s huge 66-52. The remarkable athlete completed 14 of 22 passes 258 yards and Seven TDs, rushed for another 217 yards on 33 carries and 2 more scores and made…..hold on to your hats….20 tackles on defense with 8 solos.

What this young man has done during his career is nothing short of incredible. Last season his Plainview Pirates never sniffed a victory, going 0-8. Now they sit at 4-2, ranked #14 in the Class D-1 wild card standings.

*Kason Loomis-Bridgeport - Short night for the Bridgeport two-time 1000 yarder in the Bulldogs 67-22 win over winless Kimball. Loomis carried 5 times, scored on 4 of them, on his way to 155 yards. That increases Kason’s 2022 rushing yards to 1,165 at this point in the season.