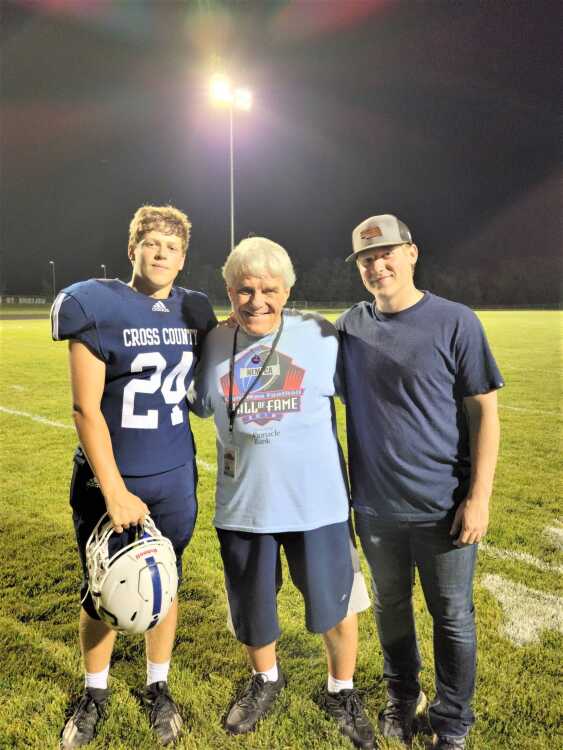 That's Andrew (#24) and Alex (street clothes) Dubas in the photo. Andrew, a junior at Cross County high school, scored the first touchdown of his Varsity career a week ago against Omaha Brownell-Talbot. Alex, an All-Stater from Cross County a few years back, was also a standout at Midland University. The Dubas brothers Dad, Steve Dubas and Uncle ED Dubas were standout lineman for the Fullerton Warriors not that many years back.

***Andrew Dubas-Cross County - A week ago in Cross County's 74-14 win over Omaha Brownell-Talbot, junior WR Andrew Dubas, who has fought through injuries during his career, scored his first varsity touchdown, a splendid 37 yard touchdown reception from QB Lucas Jacobsen. Dubas also made 4 tackles on defense in the game.

Andrew’s older Bro, Alex Dubas, was an All-State defender for Cross County during the lean years at that school and was later a standout at Midland University.

Now there’s bloodline here, as Alex and Andrew’s Dad, Steve Dubas and Uncle Ed Dubas were standout lineman for the Fullerton Warriors back in the day.

Stay healthy Andrew because there will be more touchdowns and more tackles down the road for you.

*Carlos Collazo-Aurora - Here we go again. The senior standout ran the ball 34 times for 234 yards and touchdown runs of 18, 3 and 2 yards in the Huskies 33-14 over an Ashland-Greenwood team that had not suffered a regular season loss since dropping a 26-21 decision to Lincoln Lutheran on October 19th of that year

The amazing Aurora senior has now compiled an unofficial 624 yards on the ground in just 3 games. Platteview will be the next team to have a shot at holding down the nearly unstoppable Carlos Collazo.

*Ryker Evans-Hi-Line - Rambled for 148 yards and a pair of touchdowns on 20 totes in the Bulls 12-8 win over Sutton. Yeah, but can he play defense? OH YEAH. Ryker was all over the place on defense, logging 16 tackles (6 solos).

*Karter Kerkman-Norfolk Catholic - It was a short evening for Karter Kerkman and the other starters for the Norfolk Knights in their 49-7 win over Logan View/Scribner-Snyder. In about a quarter and a half, the veteran Kerkman had just 5 carries, but sprinted for 118 yards and a pair of touchdowns which came on his first two carries of the game (54, 31 yards). That should give Karter Kerkman an unofficial 478 yards rushing on just 46 carries after three games.

*Carter Harsin-Minden - Poised QB was a standout in the Whippets sweet 32-14 win over Kearney Catholic. Harsin completed 8 of 10 passes for 128 yards, including scoring completions of 23 yards to Brycen Schwenka and a 43 yarder to Ryan Holsten. Carter also rushed for 137 yards on 20 carries and scored on a 27 yard dash in the game.

NOW, how good is this Minden squad? I watched Adams Central work to post a 28-7 win over them in a Week Zero matchup, a game that painted Minden as a pretty salty football team despite the three touchdown loss. Since that night, Minden has pitched a 23-0 shutout on a good St. Paul team, and beat a good Kearney Catholic bunch, 32-14.

This Minden team has played some fierce defense the past two games. After giving up 474 yards of total offense to Adams Central the first game, the Whippets have held St. Paul to 170 total yards of offense and Kearney Catholic to 183 total yards respectively the past two weeks.

With a District schedule of Broken Bow, Cozad, Gothenburg and Holdrege, and out of District matchups with Fairbury and mighty Aurora, all but Aurora look like manageable games for Minden. Very competitive, but still manageable.

Keep an eye on these Whippets.

*Leyton Rohde-Ansley-Litchfield - Senior quarterback was pure gold in the Spartans 36-6 win over Pleasanton. Rohde completed 6 of 10 passes for 125 yards which included a 21 yard TD pass to sophomore Luke Bailey, who caught 5 of Rhode’s passes for 89 yards and made 7 solo tackles on defense. Leyton also rushed for 135 yards on 16 totes with a touchdown covering 28 yards.

Junior Ashton Behmerwohld led the Ansley-Litchfield “D” with 11 tackles and an interception.

*Landon Classen-O’Neill - Senior QB had an awesome night in the Eagles 35-6 win over new 11-Man team Atkinson West Holt. Classen hit 11 of 16 aerials for 169 yards and three touchdowns. Two of the scoring receptions were hauled in by Drew Monroe (23, 11 yards) and Ryder Pokorny (69 yards) caught the other.

Landon Classen also ran the ball 9 times for 62 yards with a pair of scoring runs from 4 and 9 yards away. He also made two tackles on defense, both for losses.

*Jackson Roberts-North Platte St. Patrick's - Looks like another favorite player of mine may be on his way to yet another 1000 yard rushing season, his 3rd in three seasons.

Jackson Roberts was handed the ball just 5 times in the Irish 70-0 frolic over Kimball, but he still managed 115 yards rushing, threw a 31 yard touchdown pass and scooped up a fumble and returned that 7 yards for a TD.

*Brady Cook, Max Voichahoske, Fletcher Dubas-Fullerton - Sophomore Fletcher Dubas completed 7 of 13 passes for 180 yards and a touchdown in the Warriors 46-28 victory over an improved Twin River team. Young Dubas also had 5 tackles on defense, all solos.

All-State candidate Brady Cook was a Swiss Army Knife for Fullerton, rushing 17 times for 86 yards and THREE touchdowns, catching 4 passes for 98 yards and a score, PLUS logging 10 tackles on defense with 8 solo stops, 3 tackles for loss and 2 sacks. Max Voichahoske led the defense with 11 tackles, 9 of which were solos.

Can this Fullerton team tackle or what? Out of 52 teams tackles vs. Twin River, 40 were one-on-one solo stops. Now that’s tackling!

*Cade Johnson-Wakefield - The Wakefield QB was an absolute shining star in the Trojans wild 64-62 win over a good Pender team. Johnson ran the ball a grueling 36 times for 170 yards and FIVE touchdowns covering 1, 2, 1, 4 and 2 yards (at least the five short TD runs didn’t tire him out).

Cade also completed 6 of 8 passes for 135 yards, none more important than the 30 yard touchdown pass to Caleb Chase that ended up winning the game with 1:01 left in the 4th.

One thing we know about Cade Johnson. The young man is lethal when he decides to run the ball from his quarterback position…..and he does that a bunch. Against Plainview, he ran it 36 times for 274 yards, versus Bancroft-Rosalie, it was 28 carries for 172 yards, and if you add the 170 against Pender, the guy is sitting at 616 yards rushing (100 carries) after just 3 games.

*Zack Lewandowski, Carter Jasnoch-Ravenna - The touchdown twins are tearing it up for Ravenna this season. In the Bluejays 50-18 win over Cambridge, QB Zack Lewandowski was 3 of 6 passing in the win, all three of his completions going for touchdowns. Gavin Reisbeck caught two of two of those scoring tosses covering 24 and 23 yards while Caden Larsen nabbed the other from 13 yards away.

The shifty Lewandowski also rushed 17 times for 118 big ones, which included a 44 yard scoring dash. Carter Jasnoch gained 81 yards on 16 tries with a 5 yard touchdown in the big win.

After 3 games Zack Lewandowski is sitting 483 yards rushing on 48 carries and 10 TDs, while Jasnoch has run for 339 yards with 5 scores.

Ravenna could be rolling at 5-0 before being challenged by Nebraska Christian, Arcadia/Loup City and Riverside the last 3 games of the regular season and remember, Ravenna IS eligible for the playoffs in 2022.

*Taylor Nilson, Gage Walton-Creighton - Bulldog signal caller Taylor Nilson connected on 15 of his 28 passes for 206 yards in that 38-30 loss to powerhouse Elgin/Pope John. Kale Fuller was on the receiving end of one TD toss (8 yards). Ty Diedrichson caught the other, a short 1 yard TD.

Taylor Nilson is enjoying a nice start to the 2022 season, completing 34-68 passes for 474 yards with 6 TDs. He also has 27 tackles on defense and has an interception for the 2-1 Bulldogs.

*Ashton Lurz, Connor Kreutner-Valentine - That sweet 1-2 Valentine rushing punch was at it again in the Badgers 46-12 victory over the visiting Alliance Bulldogs. QB Ashton Lurz, a tough, hard charging runner, reeled off 131 yards on 20 carries and 3 touchdowns in the win. Equally hard running Connor Kreutner added 89 yards on 14 touches with a 22 yard TD run.

So, after three games for the Badgers, it’s Ashton Lurz, leading the way with 416 yards and 8 touchdowns followed by the quick-stepping Connor Kreutner, who has 332 yards rushing with 3 TDs.

The 3-0 Badgers will host Chadron this Friday in what should be a real test for Valentine.

The Panthers sent shockwaves through the Class D-1 circles with their 52-28 spanking of previously unbeaten and high scoring Elmwood-Murdock.

Junior Drew Erhart completed 17 of 27 passes for 227 yards and a trio of touchdowns. He also scored another touchdown on the ground to go with his 102 yards on 16 carries.

Erhart’s leading pass receiver was Hunter Pope, who hauled in 7 of Erhart’s aerials for 112 yards and one TD.

The leading rusher however, was Alex Hatcher, who bolted for 169 yards on 23 carries and 3 TDs.

On the defensive side, Nick Sweeney led the way with 16 tackles (3 solos). Senior Zach Fitzpatrick followed with 13 stops (5 solos) and Jacson Dillon added 12 tackles with 4 solos. Both Alex Hatcher and Hunter Pope had interceptions in the game.

How much of an “upset” is this 52-28 win over Elmwood-Murdock? Maybe not as huge as you think, considering the fact Palmyra is unbeaten through their first three games with their other wins coming over Weeping Water (51-34) and Lourdes Central Catholic (60-22).

You also must remember Junior Drew Erhart is a rifle-armed sharpshooter, having already thrown for 707 yards and 13 TDs in just 3 games. Also remember that Erhart completed 66% of his 172 passes for 1,611 yards and 23 touchdowns his sophomore season and hit 57% of his 202 passing attempts for 1,417 yards and 15 TDs his Freshman season when the dude wasn’t even old enough to get a driver’s license.

Erhart is also not afraid of running the football, amassing 1,447 yards and 22 TDs to date.

Palmyra is currently rated 8th in the most recent Omaha World-Herald Class D-1 ratings with games remaining against 3-0 Thayer Central (this Friday), Exeter-Milligan-Friend (2-1), Johnson County Central and Southern, both 1-2, and then close with tough Freeman, currently 2-1.

BUT remember, Palmyra is NOT eligible for the 8-Man playoffs due to a boy enrollment figure above the allowed number, so this Regular Season means a whole bunch to this squad.