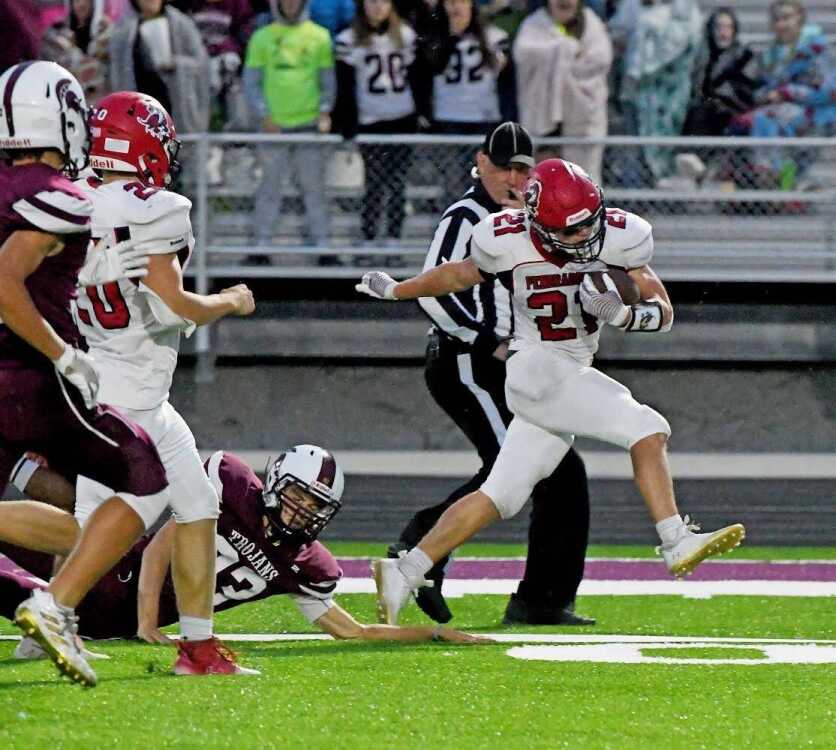 *Quinton Heineman-Pender - Mother of Mercy, what does a guy have to do to get a win these days? Heineman, a 5-10, 165 pound senior who is listed as a Punter, Wide Receiver and Strong Safety or simply an ATHLETE, did everything in a 64-62 loss to Wakefield, but win the game.

That’s 357 yards of total offense and a night for the ages for most people.

Pender is a team you would not want to face in the postseason. Yes, they are 1-2 right now, but one of the losses is to D-1, #5 Clarkson-Leigh. The Pendragons have Swiss Army Knife, Quinton Heineman, a very fine quarterback (Braxton Volk), and an 11 flat sprinter (Brody Krusemark), who can go the distance every time he touches the ball.

If Pender can stop some people on defense, the Pendragons will be a dangerous team come November.

I witnessed the Titans throttle a good Heartland team 48-6 on a windy, windy night last Friday in beautiful Henderson, Nebraska. Fullback Jordan Mariska broke loose for 165 yards on 17 touches with touchdown runs of 8, 57 and 14 yards to pace the Titans.

And then there’s C/LB Gunner Mumford, who not only is a sure-fire All-State selection, but has the best pure tackling technique I have seen in many, many moons. All the 5-10, 185 pound senior did was make 21 tackles (4 solos and 2 sacks in this game.

If Gunner Mumford continues to have games like last Friday, I hope some college scouts will take notice despite his 5-10, linebacker frame. The kid just simply strikes fear into the eyes of any ball carrier and his lateral movement is really, really impressive.

Quinn Rosno was also active on the ground with his 128 yards on 15 carries, and Chase Evans was his usual self with 70 yards on just 7 carries and a 15 yard TD run.

For the year (3 games), Carson Kudlacek has completed 29 of 51 passes for 649 yards and 9 touchdowns and rushed for an additional 137 yards with 3 more scores. And lest we forget, the St. Cecilia Defense is one of the stingiest in Class C-2, allowing points for the first time this season in their last outing vs. Gibbon.

Super Coach Clint Head has this team poised and ready for a deep playoff run.

*Anthony Rezac, Teddy Rezac, Keynan Cotton, Curt Cubrich-Omaha Westside - Talk about solidifying a #1 position in the ratings! The Warriors took care of Bellevue West last Friday 56-35 and those Rezac twins (who obviously inherited their athletic ability from their DAD) were never better.

QB Anthony Rezac completed 14 of 17 passes for 132 yards with an 8 yard scoring pass to Christian Jones. Anthony also rushed 17 times for 125 yards and a pair of TDs covering 1 and 54 yards. Twin Bro Teddy Rezac picked off two passes on defense.

Rugged RB Curt Cubrich may have changed the flow of the game with his electrifying 73 yard TD run 75 seconds deep into the 3rd quarter. Bellevue West led the Warriors 21-14 at the half

Fifty four seconds after the Cubrich score, it was an 83 yard punt return by lightning fast Keynan Cotton that would put Westside up for good. And it was Anthony Rezac’s pair of touchdown runs that put the game out of reach after Thunderbird ace Danny Kaelin had pulled his team to within 42-35 with a TD strike to Dae’Vonn Hall with 8:04 left in the game.

This just in. Omaha Westside is the Real Deal.

*Kyle Kasik, Drew Beeson-Clarkson-Leigh - In a tough 22-0 win over Bancroft-Rosalie, the multi-talented Kyle Kasik rambled for 300 yards on 22 carries with scoring jaunts of 75, 19 and 72 yards. He also posted 9 tackles on defense (6 solos).

The outstanding Drew Beeson had his usual top notch performance, making 17 tackles with 10 solo stops. The 5-11, 190 pound defensive terror already has 37 tackles after three games for Jim Clarkson’s Patriots, and a staggering 211 tackles during his 26 game career, including an amazing 72 tackles with 7 TFL his Freshman season.

Could this dude, Drew Beeson, be as tough as Clarkson-Leigh assistant coach Bob, “the Hammer” McEvoy was in high school?

*Hayden Kramer-Maywood-Hayes Center - Good grief, Hayden Kramer must have been frustrated after his minus 6 yards rushing in the 64-8 loss to South Loup in Week Two because the 6-4, 190 pound senior took it out on Silver Lake last Friday afternoon with his 476 yards of total offense in the Wolves 59-50 win over Silver Lake.

When Kramer wasn’t completing 8 of 12 passes for 200 yards and FIVE touchdowns, he was finding gaping holes in the Silver Lake defensive line to the tune of 276 yards rushing on 20 carries with scoring runs covering 58, 58, 47 and 16 yards.

Okay, in case you may have forgotten the name Hayden Kramer, let me give you a refresher course on this dude’s past.

Kramer played football for Medicine Valley the past two years. During his Junior season, Hayden Kramer had 881 receiving yards with 13 TDs, 411 yards rushing with 11 more TDs, completed 4-7 passes for 138 yards with 2 additional touchdowns, made 70 tackles on defense with 13 tackles for losses, and booted 24 of his kickoffs into the end zone for touchbacks.

His Sophomore season went like this: 759 receiving yards with 13 TDs, 115 yards rushing with 4 more TDs, 43 tackles on defense with 19 tackles for loss and 1 interception. He also returned two kickoffs for touchdowns and took one punt return to the house for a total of 20 TDs.

In an answer to a friend of mine’s question “Who IS this kid? Now you know!

Hayden Kramer is a BALLER.

*Keaton Karr-Silver Lake - Speaking of the Maywood/Hayes Center/Silver Lake game, the 5-5, 155 pound Karr was literally unstoppable in the Silver Lake loss. The compact senior running back erupted for 334 yards on 44 carries and 3 touchdowns in that 59-50 loss to the Wolves.

Keaton Karr now leads all 8-Man running backs with 886 yards and 11 TDs after 3 games. Only Ashton Brinson of Arendell Parrott Academy (North Carolina) is ahead of Karr Nationally. Brinson has 916 yards in FOUR games. Keaton Karr’s 295.0 rushing yards/per game DOES lead the Nation for players who have played 3 games.

(Incidentally, Nebraska has Three 8-Man players in the National Rushing yards Top 10. Lance Bester of Howells-Dodge is 4th with 805 yards, while Kason Loomis of Bridgeport checks in at #7 with his 708 yards.)

The State of Nebraska IS the King of 8-Man Football in this country.

*Jake Garcia-Omaha Gross Catholic - Two-time 1000 yard rusher is on his way to number three. In the Cougars 21-14 win over Elkhorn High, the hard running Garcia carried the rock 15 times for 140 yards, swelling his 3 game total to 589 yards (5 TDs).

Big Leighton Weber made 9 tackles which included 7 solos and 2 sacks, and Mr. “I’m everywhere” Holden O’Dey added 5 stops with a sack of his own.

O’Dey is another guy who gained all of his athleticism from his Father (Tim), don’t cha’ know.

*Jace Chrisman, Cohen Evans-Grand Island - The Islanders turned to Chrisman again in the 4th quarter and the senior came through with a pair of money quarter scoring runs of 7 and 6 yards, part of his 135 yards rushing on 13 carries in GI’s come from behind 20-16 over an improved Norfolk team.

Norfolk had a 16-7 lead entering that 4th stanza in Grand Island.

Islander Cohen Evans. who is certainly not known for his blinding speed, rushed 8 times for 98 yards, including a first quarter impressive 79 yard TD gallop.

Now hold the phone, maybe Cohen “the Jet” Evans IS a speed demon.

Ethan Golda led the ground assault with his 133 yards on 24 carries. Basketball superstar Cael Wichman led the Trojans defense with 10 tackles (4 solos) while Leo Guenther chipped in with his 8 stops (5 solos).

*Charmar Brown-Creighton Prep - Looks like the Junior Jays backfield star is on his way to another 1000 yard season after his 214 yards on 18 carries in Prep’s heartbreaking 16-13 loss to powerhouse Gretna. Brown escaped for two beautiful long distance runs covering 69 and 76 yards in the game, elevating his season rushing total to 586 yards after 4 games.

*Cade Hosier -Elmwood-Murdock - Despite coming out on the short end of a shocking 52-28 loss to Palmyra, the lightning fast Cade Hosier, with the assistance of that fine Elmwood-Murdock O-Line, still managed to run for 234 yards on 29 carries and two touchdowns. That gives the sure-fire All-State candidate 680 yards on just 57 carries (12 yds per) and 13 TDs after just three games.

Cade has still averaged 9.4 yards per carry during his 29 game career to date, and that’s been good for 3,177 yards rushing with 43 touchdowns.

*Wyatt Archer, Bennett Turman, Sam Brummond-Omaha Skutt Catholic - In a 26-15 win over Beatrice; The great Wyatt Archer ran 9 times for 71 yards and a touchdown, caught a beautiful 75 yard touchdown pass from Bennett Turman, and made 11 stops on defense with 3 solo tackles. Turman was 3 of 6 passing for 118 yards which included that 75 yard bomb to Archer. Sam Brummond pirated a pair of Beatrice passes and made 7 tackles for the Class B, 3rd rated SkyHawks.

*DJ Helms, Tony Palmer-South Sioux City - Quarterback DJ Helms was 11 of 19 through the air for 137 yards with scoring passes of 8 yards to Christian Barrias and 35 yards to Tate Albertson in the Cardinals doubled-up 40-20 win over Omaha Northwest.

Sophomore running back Tony Palmer carried 21 times for 110 yards and TD runs covering 11, 14, and 8 yards to aid the South Sioux City win. Young Palmer is off to a quick start after missing the season opener, gaining 284 yards in just two games.

*Carson Wessel, Isaac Classen-Humphrey St. Francis - Wessel not only scored the touchdown with 1:01 remaining in regulation to force overtime, but then scored the winning touchdown in overtime on a 7 yard run, as the Flyers won their FIRST game of the season with a 38-36 OT win over previously unbeaten Osceola.

How strange is it to see the mighty St. Francis 1-2 at this point in the season?

*Ian Reardon-St. Edward - Beavers quarterback had a career game in a 70-65 loss to Lewiston last Friday afternoon in St. Ed. Reardon completed 9 of 15 passes for 208 yards and 3 touchdowns, rushed 14 times for 189 yards and FIVE more touchdowns, made 17 tackles on defense AND mowed the football field after the game with a push mower to demonstrate to fine Head Coach Darren Luebbe that he wasn’t tired following the special performance..

*John Placke-St. Paul - Senior Running Back tied a state record when he took it to the house against Columbus Scotus from 99 yards away. No, St. Paul lost the game 28-18, but John Placke finished the night with 147 yards on 10 carries. More importantly, later in life he can tell his kids about taking the pitch in the end zone, breaking free at the 15, and pulling away from the swift Scotus defense to tie a state record that can never be broken.

*Wiley Ziegler-Bloomfield - Bees scatback ran 14 times for 151 yards and a pair of scores in Bloomfield’s 62-12 romp over Tri-County Northeast.

The zig-zagging Ziegler has carried the ball just 35 times in Bloomfield’s first 3 games, but has still managed to break loose for 406 yards and 6 TDs. That’s 11.6 yards a pop, folks!