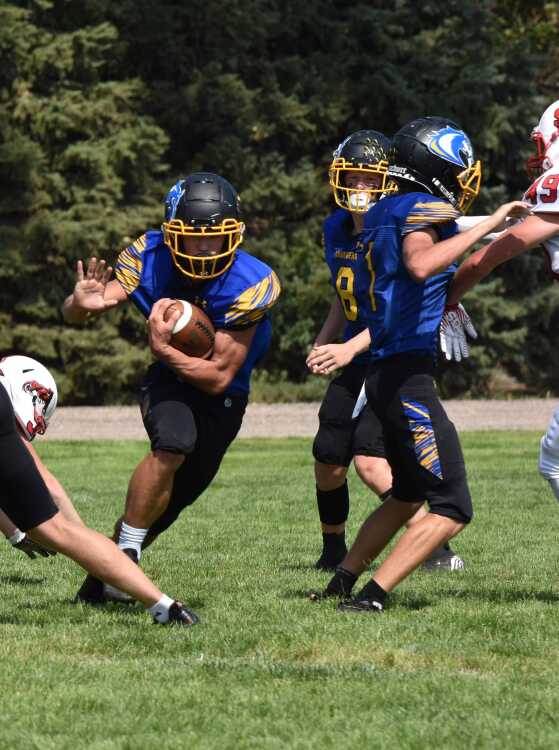 Molt’s rushing touchdowns covered 1, 65, 51, and 47 yards. His Kick Return TD was from 66 yards out in the opening quarter, giving Riverside a two TD lead at the time.

Versatile quarterback Drew Carraher was also a standout in the contest. Rushing 9 times for 108 yards and two TDs (9, 61 yards). He also completed 7 of 13 passes for 69 yards, but 3 of those 7 completions were for scores. Another speed burner, Carson Bloom, caught 4 passes for 43 yards, one of which was a 17 yards TD. Bloom also made 10 tackles.

*Carlos Collazo-Aurora - Two thousand yard rusher was at it again in the Huskies 34-14 victory over a good Boone Central team. The senior All-Stater had a hand in every Aurora touchdown, rambling in from 79, 2, 32 and 80 yards away, plus grabbing an 11 yard scoring reception from QB Drew Knust.

When all the smoke cleared, Collazo had 256 yards rushing on 17 carries to go with those 5 touchdowns. That unofficially gives Carlos 390 yards rushing with 8 TDs.

Class C-1, #1 Aurora will face a stiff test this Friday when super Coach Kyle Peterson’s forces travel to Ashland-Greenwood to meet the 3rd rated Bluejays, who have given up just 6 points in their first two games.

High school fans, Fremont has lost all three of its games in 2022, but this Hudson Cunnings stands out like a shining star.

This dude is strong, fast and is a natural football talent. Some next level football program should be watching this young man. Coach Jamrog?

*TeShawn Porter-Omaha North - Escaped for 255 yards and a 74 yard touchdown on 30 carries in the Viking’s exciting 14-13 victory over a rapidly improving Millard West team. Porter was a late game hero, completing a 45 yard scoring pass to Khalil Davis with just 3:37 left in the contest.

Porter now has 467 yards and 4 TDs after two games for #7 rated Omaha North.

*Isak Doty-Sidney - Slender 6-2, 150 junior quarterback was a shining star in the Red Raiders 33-14 win over Chase County. Doty connected on 6 of 11 passes for 70 yards, but 3 of those went for touchdowns. He carried the ball just 9 times in the contest, but escaped for a monster 237 yards and two more scores.

Isak Doty, who flashed great speed on his 60 and 67 yard touchdown gallops, looks like a very poised QB on film.

*Karter Kerkman-Norfolk Catholic - The 6-0, 190 pound back was impressive (again) in the #1 Knights 35-14 win over highly touted Ord. The senior all-stater rushed for 133 yards and 4 touchdowns on 24 carries in that win, giving many the impression that when Hall of Fame Coach Jeff Bellar needs a touchdown, he simply summons Karter Kerkman’s number and gets his wish.

This young man is definitely a Baller.

*Danny Kaelin, Dae’ Vonn Hall, Isaiah McMorris, Jadn Bullion-Bellevue West - The Boyz from Bell West were doin’ a little dancin’ last Friday during their 60-13 romp over Omaha Burke. Thunderbird QB Danny Kaelin was definitely having some fun, completing 12 of 18 passes for a nice 318 yard night with four touchdown tosses, one a school record that can never be broken….Tied, but not broken.

Dae’ Vonn Hall latched on to 6 of Kaelin’s aerials, good for 171 yards and TD receptions covering 27, 39 and 69 yards. Isaiah McMorris caught 4 of Danny’s passes for 154 yards, one of which covered 99 Yards. McMorris actually had to stop and wait for Kaelin’s pass for the Thunderbird’s own endzone, but after he made the catch at the Bellevue West 33 yard line, he split two Burke defenders and angled the remaining 67 yards to the left pylon, completing the record TD reception.

Jadn Bullion, the Omaha Central transfer, made 8 tackles on defense (4 solos) with one TFL.

*Lance Brester-Howells-Dodge - Pretty simple conclusion to be drawn here. Lance Brester has been virtually unstoppable in the Jaguar’s first 2 games of 2022. In the Jags 58-16 win over a young, but fine Fullerton football team, Brester blistered the Warriors defense for 291 yards on 33 carries and scoring runs from 5, 63, 56 and 10 yards out. Coupled with his opening game 217 rushing yards against a really good Neligh-Oakdale squad, Lance Brester is already at the 508 yards rushing mark.

At 6-3 and 185 pounds, Mr. Brester is an imposing figure when approaching would-be tackler at full speed

*Jack Wemhoff-Elgin Public/Pope John - Amazing 5-9, 155 pound running back ran through Osmond’s “D” to the tune of 179 yards on 31 carries with a pair of TDs in the Wolfpack’s 46-22 win over the Tigers. Wemhoff also caught 2 passes for 24 yards and a score and recorded 8 tackles on defense.

Now, here’s the deal on the Wemhoff’s 5.000 Career Rushing Yards Watch. Jack has already rambled for 3,395 yards in his 32 game high school career. That leaves 1,609 rushing yards to hit the 5,000 yard mark. Now, with 6 regular season games remaining on Elgin PPJ’s schedule, it’s not out of the question, but highly unlikely Wemhoff would average 267.5 yards rushing per game BUT, the Wolfpack is currently ranked #2 in Class D-2 and one of the co-favorites to win that class.

So, it is my thought that Jack Wemhoff is going to have more than a few postseason games to chase that elite list.

Auburn, who hopes to crack the C-1 ratings soon, travels to Wahoo this Friday.

St. Cecilia, who is currently ranked #3 in Class C-2, has a top notch head coach in Clint Head, who knows the game of football and has these Bluehawks kids believing in themselves, which will carry them a long way as it did a year ago.

*Jackson Roberts-North Platte St. Pats - The Junior two-time 1000 yarder rambled for 197 yards on 16 totes and 3 TDs covering 26, 38, 28 yards, in the Irish 58-16 win over a decent Hi-Line team. Jackson Roberts is one of just FOUR Nebraska high school football 11-Man backs to rush for over a thousand yards as a FRESHMAN.

*Nick Colvert-Bennington - 5-7, 160 pound senior is doing his best to fill the shoes of record setting Dylan Mostek. In the Badgers 38-0 win over Plattsmouth, Culvert carried 16 times for 142 yards and a 48 yard TD run. Nick also had one reception in the game and that of course, went for a 12 yard touchdown.

In two games, Nick Colvert has 287 yards on the ground with 4 TDs and 5 pass receptions for 92 yards and a pair of scoring catches. Now, Culvert hasn’t run a :10.6 hundred like Mostek did, but the dude did anchor Bennington’s 400 meter relay that placed 2nd to Waverly in last May’s state Track Meet (:43.03).

My point being, you don’t want to let Colvert get a step up on your defense with a football in his hands.

*Conor Booth-Wahoo Neumann - Sophomore RB exploded for 187 yards on just SEVEN carries with touchdown runs of 87, 51 and 34 yards in the Cavaliers 42-21 win over Lincoln Lutheran.

*Zane Flores, Joe Roll-Gretna - Short night for both Flores and Roll as the Dragons sped to a 49-0 halftime lead over Omaha Central. Flores connected on 14 of 16 pass attempts 185 yards with a couple of scoring tosses, one of which went to Joe Roll (8 yards). The sculptured Roll also returned a punt 60 yards for a score in the opening half in the 56-0 route.

*Keenan Theobald-Fillmore Central - Mother of Mercy look who is 2-0 on the season! The last time Fillmore started 2-0 was back in 2016 when they won their first three, then proceeded to drop their final 6 games of the season.

But that was then and now is Keenan Theobald’s turn to shine in 2022. In the Panthers 21-7 win over Milford, the 6-0, 185 pound senior rambled for 210 yards on 20 carries and one touchdown and logged 13 tackles from his MLB position.

That gives Keenan 313 yards rushing through two games as the Panthers enter their Week Three tussle at 2-0 Centennial.

*Ashton Lurz, Carter Kreutner-Valentine - Badger duo combined for a staggering 398 yards rushing in Valentine's 28-20 win over a good Centura team on a sizzling hot Friday afternoon game north of Cairo. Quarterback Lurz ripped off 225 yards on 29 totes with 3 touchdowns, while backfield/classmate Carter Kreutner twisted, turned and churned for 173 yards on 34 touches and one score.

Lurz has 285 yards rushing through two games (5 TDs), with Kreutner close behind with 243 after the Badgers 2-0 start. By the way, Valentine has already surpassed last year’s win total in the first two games of 2022. I love it.

Karr, who was a 6-Man runner a year ago, now has 552 rushing yards, already surpassing his 9-game total of 461 yards a year ago in the 6-Man football circles.

*Austin Payne-Grand Island Northwest - In a 21-16 loss to Omaha Skutt last week, the Viking senior completed 29 of 43 passes for 400 yards with a pair of touchdown tosses to classmate Alex Korte. Payne, who I think is a very fine quarterback and senior leader, has completed 61% of his passes against Aurora and Skutt, pretty fierce competition.

This is what I think about Austin Payne and the Northwest Vikings. This 6-0, 185 pound QB can lead that program through a very manageable District schedule and Coach Stein’s forces have proven they can make a deep run in a Class B postseason.

*Derek Pfeifer-Central City - Was a true Dual-Threat quarterback in the Bisons’ 49-14 victory over Cozad. In that route, Pfeifer connected on 18 of 23 passes for 185 yards with 2 TDs. He also rushed for an additional 108 yards on 15 carries and one score. In two games, Derek has completed 64% of his passes for 393 yards (3 TDs) and added 233 yards rushing with 2 more scores.

*Corbin Horner-Dundy County/Stratton - The senior All-Stater, who ran for 1,609 yards a year ago, is off to a sizzling start for the undefeated Tigers in 2022. In Dundy’s 54-14 win over Perkins County, Horner escaped for 220 yards on 21 touches and 5 touchdowns. He also hit 4 of his 8 pass attempts for 88 yards and a pair of scoring strikes (26, 25 yards) to Alex Englot.

Corbin is already at 376 yards rushing with 8 TDs after two games and 2,663 career rushing yards with 40 TDs at the present time.

Souerdyke, the powerful 6-3, 180 SOPHOMORE, who just missed becoming just the 13th Freshman in history to crack the 1000 yard rushing mark (971) a year ago, rushed for 132 yards and three touchdowns on 19 carries against mighty Sutton. 6-0, 165 pound fullback Jordan Mariska actually out rushed Sam Souerdyke in the Sutton game, gaining 140 yards on 14 touches (with 1 TD).

So currently, Souerdyke is sitting at 284 yards rushing after two games with Mariska not far off his pace with 257 yards.

The Titans travel to Henderson this Friday to take on Heartland, a game that looks like an attractive matchup for this guy to attend.

*Breckan Schluter-Exeter-Milligan-Friend - Had another big night in EMF’s 70-26 trouncing of McCool Junction. Schluter rushed just 13 times i the first half, exploding for 223 yards with 5 touchdown runs covering 30, 1, 19, 32 and 41 yards. That gives the junior RB 363 yards and 6 TDs through the first two games.

*Trevor Thomson-Summerland - Two-time 1000 yard rusher exploded for 191 yards on 19 carries, caught 3 passes for 26 yards and made 7 stops on defense in Summerland’s 38-14 conquest of Boyd County. The incomparable Trevor Thomson now has 492 yards after 3 games in 2022 and 3,614 yards during his 4 year career. (Freshman season @ Clearwater-Orchard-35 rushing yards)

Kasik scored on runs covering 4, 4, 1 and 46 yards and had a pair of touchdown pass receptions covering 57 and 41 yards.

*Zach Lewandowski, Carter Jasnoch-Ravenna - This duo simply tore up Southern Valley’s rush defense in the Bluejays 70-34 win. Lewandowski bolted for 216 yards on 18 carries with backfield buddy Carter Jasnoch was not far in the rear view with his 190 yards on 1 touches.

*Landon Ternus-Columbus Lakeview - The senior racked up 204 yards on just 12 carries and 2 TDs in the defending Class C-1 Champions 28-15 win over an always athletic Boys Town squad. Ternus' two touchdowns were of the long distance variety, coming from 79 and 58 yards away.

*Tanner Frahm-Plainview - OUTSTANDING Dual-Threat Quarterback gave Hartington-Newcastle nightmares last week with his monster game during the Pirates huge 54-28 win. The senior sensation completed 15 of 18 passes for 175 yards and 3 touchdowns, rushed 11 times for 119 yards with TD scampers of 61, 50 yards, and racked up a monster 16 tackles on defense.

If you recall, Tanner Frahm and his Plainview Pirates did not win One Game in 2021, giving up 82 points to Ainsworth, 74 to Neligh-Oakdale, 52 to Creighton, 34 to Hartington-Newcastle, 82 more to Wakefield, 58 to Laurel-Concord-Coleridge, 50 to Lutheran High NE and 36 to a 1-7 Elkhorn Valley team.

*Korbe Urkoski-Twin River - Rushed for 203 yards and two touchdowns on 23 carries in Twin River’s 64-34 loss to Lutheran High NE. All is good in Genoa though, as Twin River snapped a 19 game losing streak in Week ONE with a 24-8 opening night win over Conestoga.