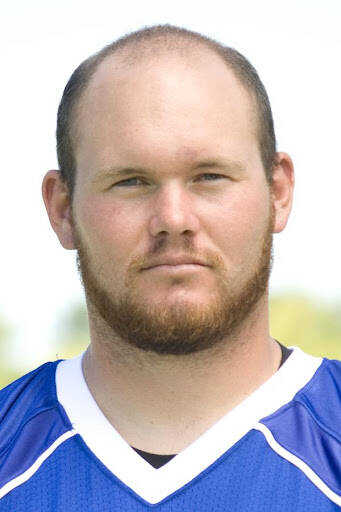 Former Overton MONSTER Orion Matthies, will be inducted into the Nebraska Eight-Man Football Coaches Association Hall of Fame Saturday in a halftime ceremony during the Sertoma 8-Man All-Star Football game at Adams Central high school. Kickoff is slated for 6:00 PM

It’s that time of year again. As a member of the NEMFCA Hall of Fame nominating committee, I am honored to introduce you to our thirteenth of 14 NEMFCA Class of 2022 Hall of Fame members.

Our 13th salute goes to one of the most dominating linemen in the history of Nebraska 8-Man football, Mr. Orion Matthies. The former Overton three-time all-state selection was an imposing figure at 6-7 and 310 pounds and Lord have mercy on anyone on the other side of the O-Line having to fight with Matthies the Monster all night.

Of course it didn’t get much better if you were a defensive lineman and moved to the other side, because there was Travis Nitsche, who stood 6-4 and weighed in at 240.

Not many 8-Man players make the Super-State (all-Nebraska) squad, but Orion Matthies aced it his senior year in 2004.

And now, we proudly present the Orion’s NEMFCA Hall of Fame bio;

From 2001 to 2004, Orion was a force at the line of scrimmage while playing for Hall of Famer Glen Snodgrass and the powerful Eagles teams of the early 2000’s.

As one of the best interior lineman in eight-man history, he helped lead Overton to the playoff quarter-finals as a sophomore- and then on to State Runner-Up finishes in both his junior and senior campaigns. During his prep career, Orion was chosen 1st Team All-District and 1st Team All-State on 3 separate occasions.

After high school, Orion went on to a highly successful playing career at the University of Nebraska at Kearney, where he was named a team captain 3 times, was also an All-Rocky Mountain Athletic Conference selection on 4 occasions, and at the conclusion of the Lopers’ 2010 season, he was named to the Division II All-American Football Team.

After college, Orion returned to Overton to coach at his alma mater. In the decade (plus) since returning home, he continues to be a mentor for current and future Eagle players and give back to his community.

The NEMFCA is honored to welcome him into the Eight Man Hall of Fame Class of 2022.