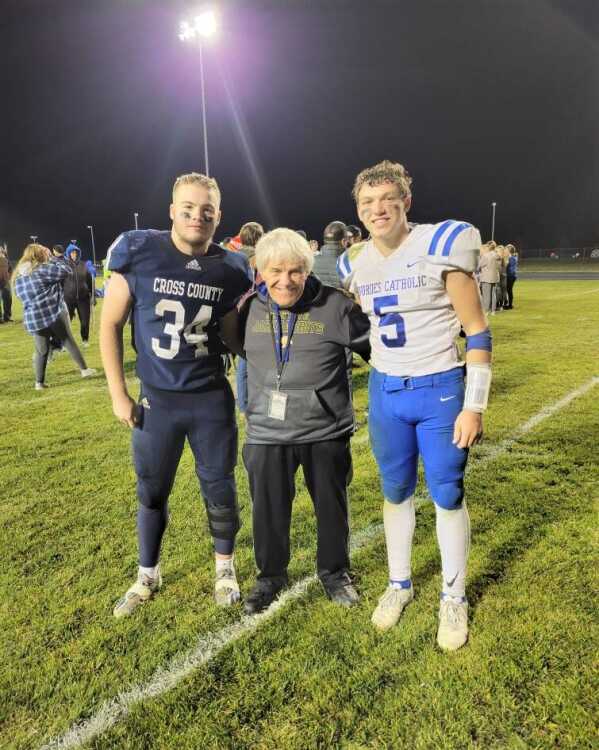 In a game that could have easily been good enough to be a Class D-1 State Championship matchup, Cross County held off a brutal Lourdes Central Catholic passing attack to advance to the D-1 semifinals. The 58-51 victory by Hayden DeLano’s Cross County forces over a Nebraska City Lourdes team I consider to be the best ever from that institution, will go down as one of the greatest 8-Man football playoff games of the 21st century.

The colossal battle came down to a monumental fumble recovery by Cross County All-Stater Cory Hollinger, a fumble that thwarted a possible winning drive by the incredible Blake Miller and the Lourdes juggernaut.

The game’s most significant play came on 4th and 3 for Lourdes at the Cross County 33 yard line with 2 minutes, 35 seconds remaining in the game and Cross County nursing that 58-51 lead.

The lost fumble occurred when the Lourdes ball carrier was fighting for that extra yard which would have given the Knights the critical first down to keep the potential winning drive alive.

Enter Division One prospect Cory Hollinger, who has basically been in the right place at the right time for the past three seasons. It was only fitting that he should make that play.

Ah, but that single play, albeit the key play of the contest, was just a drop in the bucket compared to what took place on this night when two of 8-Man football's finest teams were battling to keep their seasons alive.

It was not a night for the weak at heart.

The standing room only crowd that filled the Cougar facility knew they were bracing for a meeting of “polar opposites” as Cross County coach Hayden DeLano put it.

Questions like these swirled through the stands prior to the game.

“Was there anyone on the Lourdes team strong enough to hold down Cross County running back Carter Seim, who was much more physical than he was in 2020 (if that’s possible)”

“Could Lourdes force Cross County into a passing game by packing the line of scrimmage on defense, turning it into a Burwell 2020 semifinal all over again and a bitter heartbreak for the Cougars?”

“Could Cross County defenders like Shayden Lundstrom, Carter Seim and Alex Noyd, who had 9 interceptions between the three of them and Cougar D-Lineman like Cory Hollinger, Damon Mickey and Colby Bolton be able to pressure Blake Miller into making quick decisions on his passes, forcing incompletions, and more importantly, interceptions?”

So, the stage was set for one of the 8-Man Games of the Century.

The opening drives were vanilla for both teams, resulting in punts. Then Cross County took over. Second drive of the game; 5 plays, 58 yards in 1:15 resulting in a 38 yard pass/catch touchdown hookup between Lundstrom and Cory Hollinger. A Carter Seim run made it 8-0 with 7:14 left, opening stanza.

Another unsuccessful Lourdes possession set up an even longer Cross County scoring when a booming Blake Miller punt pinned the Cougars back at their own 5.

Twelve plays later, Haiden Hild blasted in from 4 yards out, giving Cross County a 14-0 with 44.4 left in the first. Hild had the key run of 17 yards in the four minute, 35 second, 75 yard touchdown drive.

Then came a 49 point, second quarter scoring explosion that not one fan will soon forget. Fasten your seat belts for this baby because both Cross County Head Coach Hayden DeLano and Lourdes CC Head Man Jon Borer gained a few grey hairs going into the halftime break.

*Lourdes defense is now ALIVE, and the offense scores again as Aidan Aldana plows his way in from the 3 yard line. Now it's Cross County 28, Lourdes 21.

*The Cougars regain their defensive savvy, getting a stop which leads to a long offensive drive. Carter Seim reels off brilliant runs of 17 and 30 yards, setting up a Haiden Hild 3 yard touchdown scamper with :29.4 seconds left in the first half. Seims bruising double PAT run makes it Cross County 36-21.

*Lourdes pulls off a perfectly executed Hook and Ladder pass with the speedster Aldana breaking loose for a 30 yard run after the pitch. Very next play, Miller hooked up with senior classmate Zach Tesarek (who missed the last playoff game with an illness) for a 20 yard TD strike. Cory Hollinger blocks Caleb Howard’s PAT attempt, then both teams head into the halftime intermission with Cross County leading 36-27.

Well, I can’t tell you what Coach DeLano was thinking at halftime, but I CAN tell you that THIS Lourdes team is already the best I have ever seen in 44 years of watching the Knights perform in playoff games several times.

And what might Lourdes head coach Jon Borer have said during their halftime break? I’m guessing he told his offense to go out and punch Cross County in the mouth on the opening drive, stealing the momentum for that 3rd quarter.

*THE HALFTIME STATS: Carter Seim already had 158 yards on 19 carries/2 TDs. Lourdes quarterback Blake Miller had already put the ball in the air 24 times, completing 16 for 176 yards and a pair of TD tosses. Miller also racked up another 40 yards on just 7 totes.

Lourdes wasted no time hitting the end zone on their opening possession of the 3rd quarter. Four plays, 55 yards it was, culminating with another Aidan Aldana touchdown power run of 19 yards. Blake Miller bulled his way in for the double PAT and the Cross County lead melted down to 36-35, just a minute, 20 seconds deep into the 3rd quarter.

Cross County needed to answer at this point and nearly did when Cory Hollinger hurled his muscular 6-6, 227 pound frame into the air, nearly pulling in a slightly too-tall end zone pass thrown by Shayden Lundstrom.

The near highlight reel Hollinger catch came on a 4th and 4 play from the Lourdes Central Catholic 18, so after the Knights took over at that point, it took just FOUR plays for Blake Miller to nail Zach Tesarek with a 40 yard touchdown pass.

What made the play successful was the fact Hollinger and another Cross County defender collided, attempting to break up the pass reception.

NOW, we had a different ball game. Lourdes seized the lead for the first time in the game, then added to it when Miller hit Beau Lee for the two point conversion.

Was this going to continue for the Knights? Think back now. Cross County had a 36-21 lead 30 seconds before halftime. THREE straight Lourdes touchdowns had now given the Nebraska City parochial school a 43-36 lead.

Was this “Burwell 2020” all over again for these Cross County kids? Naw. Carter Seim was still ripping off nice chunk runs, but still none were going the distance.

I’m going to ask you to turn your thoughts to earlier in the Cross County season now. The Cougars featured a PAIR of 2,000 yard rushers in Carter Seim and Isaac Noyd a year ago, BUT, Seim actually missed some time with an injury that year. Noyd, of course graduated and Haiden Hild was the heir apparent to being “the other” 1000 yard rusher in 2021. Well, Carter Seim went down with another injury earlier this season, forcing Hild to grow up in a hurry and he did just that.

Hild learned to follow his blockers, ala Seim, and began piling up the rushing yardage in Carter’s absence. Now, bring your thoughts back to the present time and ENTER HAIDEN HILD.

The 180 pound Cross County senior took the bull by the horns following Lourdes' go-ahead touchdown. Taking the ball on the direct snap from the Knight’s 35 yards line, Hild danced his way for a momentum breaking score. Lundstrom hit Hollinger for the two point conversion and Cross County was back on top 44-43 with 3:01 left in the 3rd.

*Lourdes immediately reclaimed the lead to open the 4th quarter when Aidan Aldana scored from 2 yards out with 10:43 left. Miller then nailed Joe Kearney for the 2 point conversion and now it’s a Knights 51-44 advantage.

*It’s time to put the game in Carter Seim AND Haiden Hild’s hands, BUT, will Coach DeLano have to sprinkle in some passes to pull this off?

He does not. Cross County begins a march from their own 15 following the 4th Aldana touchdown. Seim chips away, Hild chips away with rushing yardage. Still no passes. The Cross County faithful is getting edgy. Then it happens.

Hild breaks a 33 yard run, stretching from the Knights 37 yard line to the 4. Seim runs for 2, then bolts in for a 2 yard touchdown with 7:53 left. The all important double PAT run is stuffed by a swarming Lourdes defense. Scoreboard reads Lourdes 51, Cross County 50.

*Cross County holds Lourdes on the Knights ensuing possession to a 4 and out, but Blake Miller, with a nice breeze at his back, unleashes a monster punt that pins the Cougars back on their own 5 yard line.

*The clock reads 7:21 left in the game with Cross County trailing 51-50. A pair of Seim and Hild rushes get the Cougars to the Lourdes CC 34. Carter Seim then breaks one of his patented physical, high knees runs, angling for the right corner on a splendid 34 yard TD run. Carter, not to be denied, crashes in for the double PAT and Cross County has a 58-51 lead with 4:30 left.

*Lourdes has time to pull this baby out with 4:30 left in someone's season. THE Drive begins on the Knights 15 yard line. Cross County forces a 3rd and 8 at the Lourdes 18. Quarterback Blake Miller then hits Beau Lee for a huge 22 yard gain to midfield (40 yard line). Hayden DeLano’s troops then force a 4th down and 3 at the Cougar 33.

*THEN THE FUMBLE…...and the Hollinger recovery I told you about at the beginning of this article. 2:29 remains in the contest.

Cater Seim starts the drive by breaking a long run to inside the Lourdes red zone. No Dice. A holding call brings the ball back to the Cougar 27.

*1:40 remains. Saving the best for last, Cross County quarterback Shayden Lundstrom rips off huge runs of 18 and 21 yards. Lourdes uses their last time out. Lundstrom then

kneels at the Knights 16 yard line and the Quarterfinal 8-Man Classic is over.

One team is jubilant, the other has 30 hearts shattered in a million pieces. A few seniors are weeping because their playoff hopes are dashed and their careers are over. It rips my heart out every single time. Maybe it’s my age and I’m softening.

It’s a game, man. One team wins, the other loses. I’ve witnessed over a thousand high school football games in my life. I should know better by now. But in a game played as well as this one was, it’s a shame there has to be a loser.

The Cross County rushing game was led by the great Carter Seim, who rambled for 294 yards and 4 touchdowns on 38 carries. That swells his 2021 rushing total to 1,614 yards and his Career Rushing total to 4,954 yards despite the senior having missed EIGHT games in his career with a broken wrist and broken knee.

Haiden Hild added 149 yards and 3 touchdowns on 18 carries, giving him 1,201 for the year as the Cougars improved to 10-1 and will travel to Trenton next Friday to meet Hitchcock County, a 58-6 winner over Perkins County next Friday.

Nebraska City Lourdes was led by Blake Miller’s 315 passing yards. Aidan Aldana led the ground attack with his 65 yards and 4 TDs. The Knights close out the 2021 season with a 10-1 record.