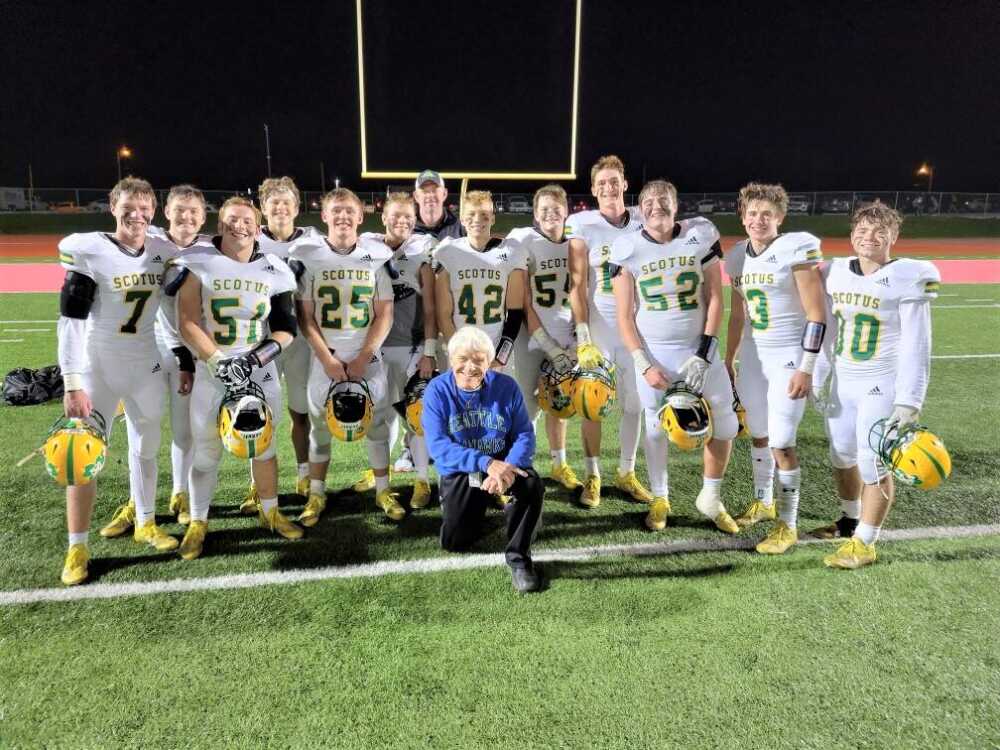 Man, woman and child, you want to talk about some killer offensive drives? You could look long and far and be hard pressed to come up with one that topped “The Drive” Columbus Scotus orchestrated in the late stages of the 3rd quarter against unbeaten Boone Central.

That killer drive flat out choked the life out of the Boone Central defense and lifted unbeaten Scotus to a 21-12 victory over the hard hitting Cardinals.

We are talking about a 20 play drive that consumed a monster ten minutes and six seconds. “The Drive” began at the Shamrocks 36 yard line with 2:08 left in the 3rd quarter and wasn’t over until two time 1000 yard rusher Devon Borchers blasted in for a victory clinching 3 yard touchdown with 3:58 remaining in the 4th stanza.

The last time I witnessed a drive of that magnitude was some years back in Minden when Gothenburg reeled off a second half, 26 play drive that consumed over 12 minutes, or one entire quarter of football and then some.

This Class C-1 battle of the unbeatens lived up to it’s pregame billing, with football prognosticators throughout Central Nebraska predicting a low scoring, hard-hitting defensive battle.

I knew precisely how tough both of these teams were, having seen Columbus Scotus handle Wahoo 31-14 on opening night, then Boone Central knock off No.1 Pierce 35-33 on September 24th.

Both teams had also been without starting quarterbacks recently, but Boone Central’s Braden Benes and the Shamrocks Trenton Cielocha were healthy and rarin’ to go in this baby.

Boone Central struck first after a Jackson Roberts interception set the Cardinals up with a short field at their own 48 yard line. Sophomore Parker Borer ripped off a 29 yard run on a jet sweep around the left side of the Cardinals offense that carried to the Scotus 27.

Two plays later, Alex Christo connected with two-way standout Ashton Schafer for a 19 yard touchdown pass. The PAT attempt was blocked and Boone Central had a 6-0 lead with 2:26 left in the opening quarter.

Just like an unbeaten heavyweight fighter, Scotus picked itself up off the ground and answered back….in a hurry.

It took just two plays for Scotus sharpshooting junior Trenton Cielocha to hook up with a streaking Chance Bailey, who had gotten himself open across the middle of the pass pattern.

The fleet-footed 5-9, 155 senior caught the perfectly thrown, tight spiral toss and outraced the Cardinal defense, angling toward the right pylon all the way for the score. Cielocha converted the PAT boot and Scotus had the 7-6 lead with 1:47 left in the quarter.

The score remained that way with the defenses slugging it out until Scotus drove to the Boone Central 13 where the drive stalled, forcing Scotus coach Tyler Linder to send in the field goal unit.

Oh, but that Coach Linder is a slick operator, don’t cha know. I had no idea what was to come and apparently neither did the Boone defense, as holder Josh Faust took the center snap, pitched the ball back to QB Cielocha, who then found a wide-open All-State Garrett Oakley for a 13 yard touchdown.

Cielocha kicked the PAT and the Rocks owned a 14-6 lead with an even 6 minute left in the 3rd quarter.

We talked about the heavyweight fighter thing earlier and now it was Boone Central’s turn to pick itself up off the green carpet and fight back. And fight back they did.

On the ensuing possession, the Cardinals unleashed “The Benes to Benes” Show and how sweet it was. It took just 7 plays to advance from the Boone 21 yard line to the Scotus endzone.

During that 79 yard drive, senior quarterback Braden Benes connected with sophomore bro Brant Benes (5-10, 150) for a 12 yard hook up, then a huge 35 yard strike that carried from the Scotus 38 to the 3 yard line.

Two plays later (following a 5 yard loss), Braden found a wide open younger bro Brant for an 8 yard scoring strike. The two point conversion was halted by the Rocks, and Boone Central still trailed, but now just by a 14-12 count.

It began at the Scotus 36 yard line with 2:08 left in the 3rd quarter. You had to figure Scotus was going to ride “The Bull”, Devon Borchers. And ride him they did.

The power running, hard charging Borchers carried 12 plays on that memorable 20 play, 64 yard drive, churning out 46 yards. Trenton Cielocha carried 5 times (his only rushes of the 2nd half) and there were a pair of passes, one incomplete and the other a completion for a minus 2 yards to Jack Faust.

And so it was, on the 20th play of the historic drive, Devon Borchers charged through the B-Gap, right side and kept his powerful legs churning for that huge 3 yard touchdown play.

Trenton Cielocha, just like clockwork, booted the PAT and Scotus had Boone Central on the ropes, 21-12 with 3:58 left in the contest.

Now, you didn’t think that was the end of the tale of the two unbeatens, did you? Not a chance. Not with Mark Hudson and the Boone Central Cardinals. No way.

The Cardinals had a shot after a touchback put the ball on the Boone 20 yard line with that 3:58 showing brighter than ever on the clock.

Benes ripped off a 9 yard gain to the 29. He then connected with Carsten Bird for a 12 yard gain. Next it was a Benes to Borer hookup for 3 yards, then a 12 yard pass to Carsten Bird and finally a 2 yard pass completion to Calvin Webster.

The Cardinals were ready to strike, but Trenton Cielocha had other ideas as the talented junior DB picked off a Brandon Benes aerial at the Scotus 21 yard line to seal the win for the Shamrocks.

Scotus then ran out the final 2 minutes, 9 seconds to seal the 21-12 victory over the Cardinals.

As far as defense, I have no official stats from Scotus, but I know Garrett Oakley was a beast on that side of the ball. As for Boone Central, the amazing Ashton Schafer reeled off an incredible 17 tackles (7 solos) to lead the Cardinals. Jackson Roberts followed with 9 stops, Carson Miracle added 8 tackles and sophomore Brant Benes chipped in 7 more tackles for the Cardinals.

I had too many distractions to keep accurate offensive stats, but I think a ballpark rushing total for Devon Borchers was 173 yards on a grueling 35 carries. Big night for #25.