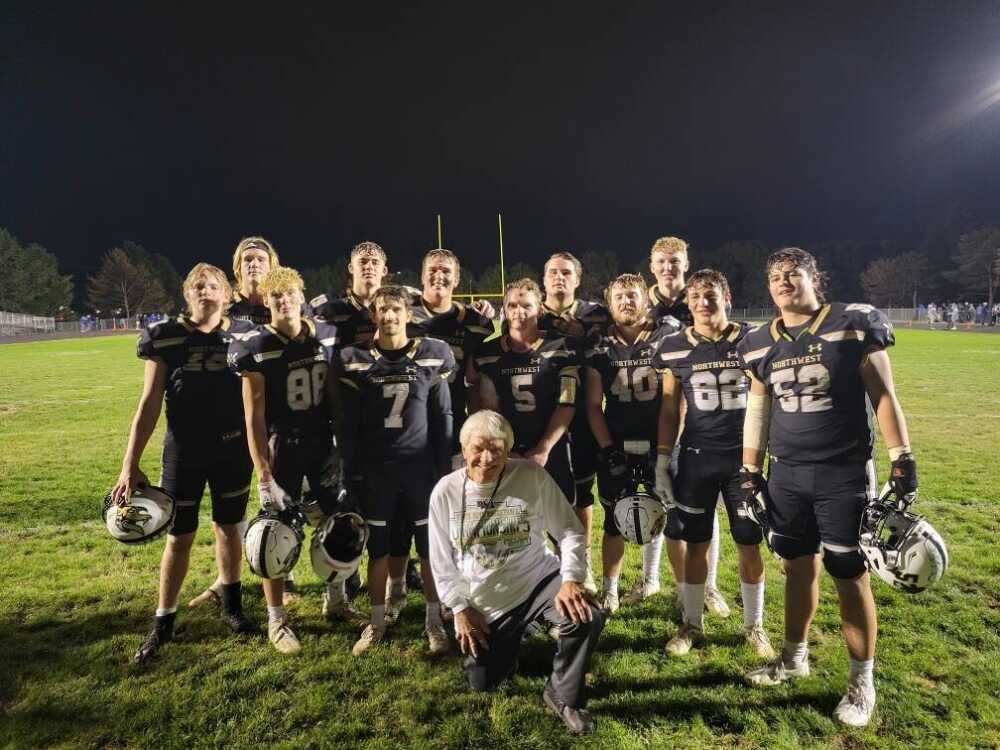 The Grand Island Northwest Offense was outstanding in their 33-14 conquest of Seward Friday night, especially the O-Line.

The resilient Northwest Vikings, playing without the services of star quarterback Sam Hartman due to concussion protocol, never missed a beat tonight in their 33-14 triumph over previously unbeaten Seward.

With Hartman on the sidelines in street clothes, the Vikings turned to backup quarterback Austin Payne and junior came through with flying colors, most times looking as though he had starting experience at the position.

Austin Payne wasn’t Sam Hartman tonight, but the 185 pound junior put up credible numbers, completing 10 of 20 passes for 77 yards with no interceptions, and rushing for 78 yards and a touchdown.

The real stars of the show for Northwest on this perfect night for football, was the Offensive line. The Northwest big men up front were consistantly coming off the ball with lightning quick force, getting the push needed to produce big rushing yards, and produce they did.

The Vikings ground offense ended the night with a season high 330 yards rushing and nobody took advantage of those gaping holes better than 5-9, 185 pound speedster Gibson Kennedy.

The senior reeled off 200 yards on 22 carries with electrifying, paralyzing scoring runs of 56 and 65 yards, making it look easy on both runs, thanks to the Vikings O-Line.

*Things were never comfortable for Seward’s incredibly talented Gavin Sukup during this game tonight. The rifle armed sharpshooter was under constant duress by the Northwest defensive line, especially being hounded by 6-2, 221 pound junior defensive end Victor Isele. Who already had registered 7 tackles for losses this season.

The Vikings may have set the tone for the entire evening when sophomore defender Nathan Carcowski picked off a Gavin Sukup pass on the Bluejays opening drive of the contest.

The turnover led to a Vikings three plays later when Gibson Kennedy blew through a nice gap to sprint for a 56 yard touchdown with 5:33 left in the first quarter.

It was a tough go for the unbeaten Bluejays all the way through the first half. When the Vikings defensive line wasn’t applying constant pressure with the pass rush, the same interior of the defensive line was completely stuffing any attempt Seward made at running the football.

The Bluejays did advance to the Northwest 25 yard line at the end of the 1st quarter, but the Vikings pass defense snuffed out the drive by forcing a pair of incompletions by Sukup.

Northwest added a pair of scores in the 2nd stanza, the first one coming after a short punt by Seward’s Hammond set the Vikings up with a 1st and 10 at the Bluejays 39 yard line.

Austin Payne would then cap off an 8 play with a 1 yard scoring dash, his fourth straight carry on the 39 yard drive.

Four minutes later, the Vikings Tyler Douglass pulled off a Tommy Frazier type 22 yard touchdown run, breaking out of a defensive pile that appeared to be a split second away from being blown dead,

It was a thing of beauty seeing Douglass emerge from the pile of Seward humanity, breaking free for the 22 yard scoring scamper to make it 19-0 at the end of the opening half.

Seward’s first touchdown of the contest was the result of a Viking’s turnover, their only one of the night.

The Bluejays Justin Matulka pounced on a loose ball, the result of an errant snap from center. Four plays later, the gifted Gavin Sukup hit Micah Hackbart with a 41 yard scoring strike, cutting the lead to 19-7.

But just one play after the ensuing Seward kickoff, Northwest’s Kennedy was off to the races again, this time for 65 yards and a score.

Just like that, the Vikings were back in front by three touchdowns, 26-7.

The resilient Bluejays answered back less than two minutes later with a Gavin Sukup to Trevor Ruth 60 yard scoring hookup, which cut the Northwest lead to 26-14 entering the money quarter.

The Vikings played smothering “D” in that 4th and final quarter, allowing Seward to get no closer than the Northwest 44 yard line.

Meanwhile, and fittingly, Austin Payne would cap off his dream night at quarterback with a highlight reel 20 yard touchdown run that featured the talented junior being tripped up twice, only to maintain his balance to add the final Vikings tally of the evening.

The Northwest offense rolled up 409 yards on this gorgeous night for high school football. Gibson Kennedy led the ground attack (330 yards) with his 200 yards on 20 totes with a pair of touchdowns. Quarterback Austin Payne added 78 yards on 15 tries and two touchdowns. Tyler Douglass chipped in another 35 yards on 7 touches and his 22 yard scoring dash.

As stated earlier, Payne hit half of his 20 passing attempts for 77 yards. Wyatt Jensen led the Vikings receivers with a pair of catches for 36 yards. Travin Harring added 3 receptions, good for 31 yards.

Sewards aerial circus was alive and well, with Gavin Sukup completing 21 of 38 passes for 254 yards and two touchdowns, with one interception. Micah Hackbart led all receivers in the game with his 4 catches for 78 yards and that 60 yard touchdown grab

The Bluejays ground game came to a halt though, being able to muster just 20 rushing yards in the contest.

Northwest will travel to York next Friday and Sam Hartman should be back for that one. Meanwhile, Seward will try and get back on the win track when they host a fine Beatrice team