Two Point Conversion lifts Aquinas past Oakland-Craig in a Thriller. 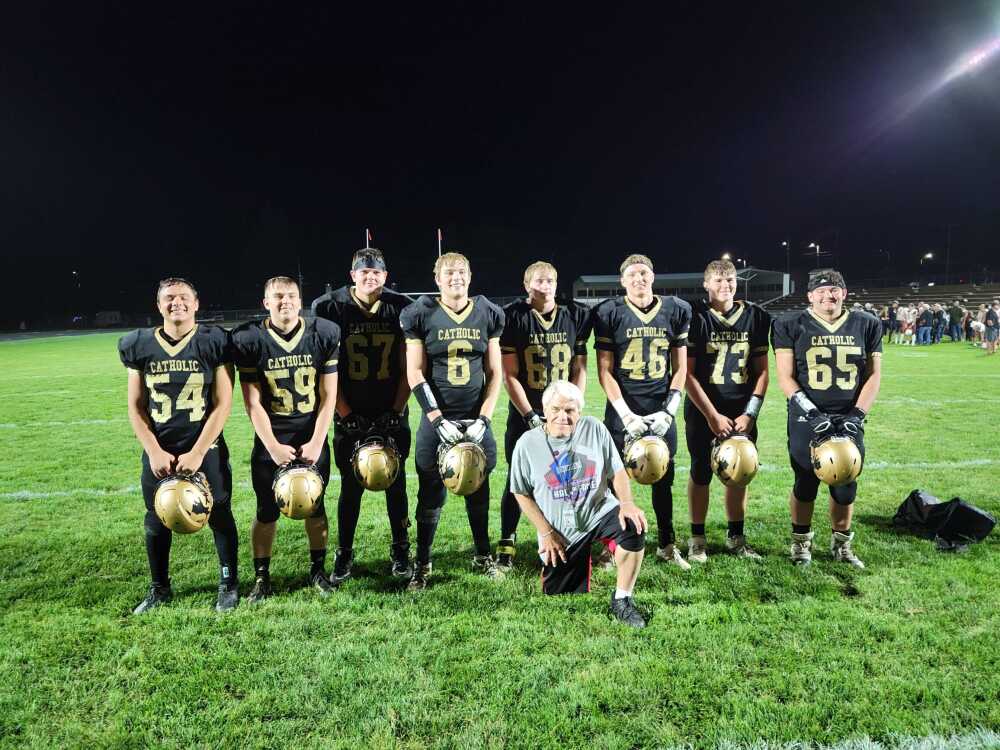 Aquinas quarterback Luke Sellers swept around his right side for the winning Double PAT with 53 seconds left in the game to help the Monarchs slip past Oakland-Craig 29-28 in a Game for the Ages.

I’m hoping whoever is assigned to cleaning the stadium bleachers after this thriller has a gigantic vacuum to suck up about 100 pounds of chewed fingernail ends. It was that kind of fingernail biter from start to finish in this battle of Class C-2 kingpins.

Forced turnovers played a big part in this Thursday night matchup between two of the finest coaches in the state, Ron Mimick of Aquinas and Oakland-Craig’s Joe Anderson.

Eight plays and 4:06 later, John Prochaska burst through a huge opening created by that top notch Aquinas line, to dash 20 yards for the game’s first touchdown. Prochaska also booted the PAT and the 2nd rated Monarchs were up 7-0.

Now, keep this in mind. Despite the fact neither team scored in the first quarter, Oakland-Craig quarterback Grady Gatewood and fabulous WR Carson Thomsen had already hooked up 4 times for 47 yards and running back Tavis Uhing looked strong, but was held to 20 yards on 8 touches. That was about to change.

The Knights answered the Aquinas score in exactly 3 minutes and 18 seconds with a steady, pounding dose of Tavis Uhing. In fact, the 175 pound Oakland-Craig senior carried on every single rushing play in the 70 yard drive, piling up 46 yards on 8 carries, culminating with a sweet 8 yard scoring run.

Uhing added the two point PAT run and the Knights had the lead, 8-7.

The Knights even survived a block in the back penalty that nullified a splendid 21 yard gain by Uhing during the drive. A 27 yard aerial strike from Grady Gatewood to Carson Thomsen aided the drive.

Aquinas would put one more tally up before the half, a 12 yard touchdown run by Caleb Thege, once again created by a huge opening courtesy of the Aquinas O-Line.

The Monarchs had just 2:28 to work with when this offensive possession began, but a long kick return by John Prochaska set up a short field for Ron Mimick’s offense at the Oakland-Craig 45.

The Monarch’s only pass of the opening half, a 19 yard strike from quarterback Lucas Sellers to John Prochaska highlighted the drive.

A Prochaska PAT kick gave the Monarchs a 14-8 halftime advantage.

*Aquinas had an opportunity to take a two touchdown lead to open the third quarter and looked like they were on their way, but a funny thing happened on the way to that two possession lead, and man did it sting.

The Monarchs chewed up an even 6 minutes with All-State fullback Micahel Andel and wingbacks Caleb Thege and slippery Curtis Humlicek doing the damage. But the Oakland-Craig defense, as good as advertised, snuffed out the drive at their 10 yard line, forcing a flip over on downs.

Now it was Joe Anderson’s offense to shine and shine they did…..in a hurry. It took just three plays for the incredible Caleb Thomsen to get behind an Aquinas defender to catch an electrifying 75 yard scoring strike from Grady Gatewood, who laid that baby right in Thomsen’s bread basket.

The 2 point PAT pass attempt failed and we had a 14-14 deadlock.

The home team Monarchs bounced right back with a three and a half minute drive that showcased that classical Aquinas power football.

That bruising running game took it all the way from the Monarch 39 to the Oakland-Craig 20 yard line where QB Lucas Sellers and John Prochaska finished the drive with a 20 yard scoring hookup.

Then things got interesting. Dependable Oakland-Craig running back Tavis Uhing was on his way to a long kick return when Aquinas junior tough guy A.J. Oltmer laid a big lick on Uhing, jarring the ball loose. A Monarch fell on the ball and Aquinas was in business at the Knights 29 yard line.

But that solid, relentless Oakland-Craig defense denied Aquinas again, snuffing out the drive at the Knights 24 yard line.

Very first play following the possession flip, Grady Gatewood AGAIN finds Carson Thomsen, this time for 30 yards. The Knights continue to drive all the way to the Aquinas 23 when the Knights are flagged for a false start.

Now…….the call must have infuriated Oakland-Craig coach Joe Anderson. The future Hall of Fame coach was all the way out to the middle of the field and was finally assessed a 15 yard penalty for unsportsmanlike conduct. Hey, it happens folks, in the heat of the game.

The infraction moved the ball back to the Knights 43, but no sweat, Sherlock, Grady Gatewood simply dropped back and found Carson Thomsen for a 43 yard touchdown.

Okay, now this game is getting interesting. A pumped up Gatewood then crashes in for the 2 point conversion and Oakland-Craig is now UP 22-21.

The Knights defense is now fired up. REALLY pumped. But on the ensuing kickoff, A.J. Oltmer zigs and zags his way to the Aquinas 45 to set up a short 55 yard field for the Monarchs.

Aquinas quarterback Lucas Sellers hits Prochaska for a 10 yard gain. Prochaska then slashes through the Knights “D” for 15 big ones and Aquinas is suddenly on the O/C 12.

Oakland-Craig decides enough is enough and forces the Monarchs into a field goal attempt at the Knights 12 yard line. Then the Knights apply a real knockout punch when All-State candidate Carson Thomsen breaks through, BLOCKS the field goal attempt, picks up the loose pigskin and rambles 70 yards the other way for a score.

Hold on. During the 70 FG touchdown runback, Oakland-Craig was flagged for another unsportsmanlike conduct penalty. Aquinas coach Ron Mimick is given the choice to have the penalty assessed on the PAT try or the ensuing kickoff.

Mimic is a legend and you don’t get there without knowing the game, so he takes the 15 yard penalty on the PAT point try and Oakland-Craig is now out of kicking range for the PAT and the double extra point pass attempt is no good.

Monarch QB Lucas Sellers is fired up and keeps it himself for 22 yards. He then finds Prochaska for a 30 yard gain.

It’s first and goal on the Oakland-Craig 8 yard line. Big Michael Andel bulls to the 1, then is stopped cold for NO GAIN twice in a row. It’s 4th and 1 at the ONE with 1:50 left.

The Aquinas offensive line gets the push, Andel plunges in for the score and Ron Mimick decide to roll the Aquinas dice and go for TWO.

Ron calls a timeout, draws up a patented “Mimick Special” and we are set.

A still fired up Lucas Sellers fakes a handoff to Michael Andel, bootlegs the ball, does a 180 and sprints around his right end for the game winning two point conversion.

With the Aquinas lead at 29-28, Oakland-Craig still has a chance with 52 seconds left in the contest. But three incomplete passes later, hero Lucas Sellers picks off a Grady Gatewood pass at the Aquinas 40 and the game is history.

Aquinas ground out 262 yards rushing in the game with All-State Michael leading the charge with 78 yards on 25 tries. Curtis Humlicek followed with 69 yards on 13 attempts. John Prochaska added 47 yards on just 6 carries.

Lucas Sellers completed 5 of 7 passes for 81 yards with Prochaska accounting for 79 of those yards on 4 receptions with a touchdown.

For Oakland-Craig, game rushing honors went to hard charging Tavis Uhing, who gained 84 yards on 20 totes. Through the air, it was an incredible, incredible performance for senior WR Carson Thomsen, who caught 9 Grady Gatewood passes for a massive 227 yards and a pair of long distance touchdowns.

Gatewood ended the night completing 11 of 17 tosses for 240 yards and a pair of scores.