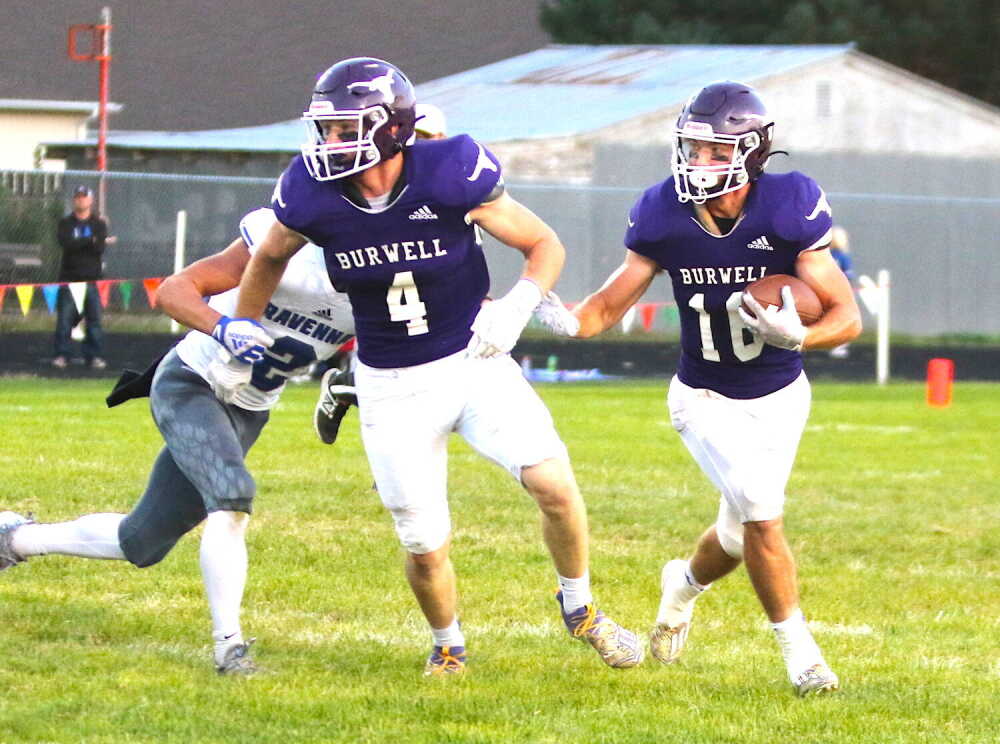 Burwell's All-State RB Caleb Busch (#16) is being escorted downfield by the talented Alex Gideon (#4) in the Longhorns win over Ravenna last Friday. Busch surpassed the 1000 yard rushing mark in the game, his second consecutive season over the magical mark. *(Photo courtesy of the great Yohn Gideon)

*Caleb Busch-Burwell - Senior speedster rushed for 250 yards and four touchdowns in the Longhorns 54-22 victory over Ravenna. The remarkable Mr. Busch escaped for TD gallops of 32, 35, 47 and 33 yards. That unofficially gives Busch 1,014 yards for the season with 20 touchdowns. If you recall, the Burwell star led the entire state in rushing a year ago with his 2,407 yards. Caleb should be approaching the 5,000 Career rushing yard mark very soon.

*Hunter Mortimer-Weeping Water - 5-10, 205 pound All-State candidate rushed 15 times for 226 yards and 5 TDs in the Indians 58-0 thrashing of Conestoga. The outstanding quarterback also completed 5 of 9 passes for 86 yards, including a 40 yard scoring strike to junior Hayden Nash. As usual, Mortimer was everywhere on defense, making 14 tackles which included 5 solo stops.

Mortimer, who is a terrific dual threat QB, has his Weeping Water team undefeated and ranked #10 in Class D-1 by the Omaha World-Herald.

*Cooper Hausmann, Norris: Speed Demon Titan quarterback was accurate on 15 of his 20 passes for 247 yards and 5 touchdowns in the 44-0 win over Omaha Roncalli. He also returned an interception for a touchdown. The senior flash also had a 33 yard Pick 6 in the 3rd quarter.

And remember, Cooper Hausmann runs a :10.7 hundred meter dash if he decides to take off out of that Norris backfield.

*Layne Warrior-Bloomfield - I want you all to remember this name. Layne Warrior. Just a sophomore at 6-2 and 165 pounds, this young man is a very special football player….AND basketball talent as well. In Bloomfield;s 70-44 loss to a strong Pender team, Warrior (the name fits perfectly) caught 11 of FRESHMAN QB Braeden Guenther’s 16 pass completions, for a whopping 172 yards with touchdown grabs of 17, 10 and 18 yards in the loss. Warrior also led the Bees defense with 8 tackles, 7 being solos and 2 interceptions.

The Pender game wasn’t an isolated incident of greatness for Layne Warrior. In Bloomfield’s opening night 60-7 win over Homer, Warrior had 9 catches for 189 yards and 3 TDs. The next week he made 6 grabs for 66 yards and a TD in the Bees 38-18 win over Wynot. Last week in the Bees 40-12 win over Allen, Warrior had only three catches, but those totalled 127 yards and a touchdown.

In 4 games, the Super Soph has 29 receptions for 556 yards with 8 touchdowns. Add in 25 tackles and 3 INTs on defense and you have a really special talent here.

*Easton Mains-Elkhorn North - 6-1, 180 pound senior dual-threat quarterback nearly led his team to an overtime win over Beatrice last Friday. Easton Mains did everything he needed to record a victory, but a two point conversion run by Beatrice speedster Deegan Nelson in overtime gave the Orange the 41-40 victory.

Check out Easton Mains statline in this heartbreaker. 217 yards rushing and two touchdown runs (5, 2 yards) on 23 carries. BUT, the big thing was Mains completing 11 of 17 passes for TWO touchdowns with NO interceptions. Prior to the Beatrice contest, Mains had no touchdown passes with 3 INTs.

Both of Easton’s scoring strikes in that Beatrice loss were gathered in by Kyree Bennett, who had 4 receptions for 53 yards with those TD catches covering 12 and 15 yards. Mains has impressive rushing numbers after 4 games for Elkhorn North.

Oh…..I nearly forgot to tell you that Mains returned a kickoff 95 yards for a touchdown in this game. He did indeed.

Yes, the Wolves are 0-4, but neither Waverly, Norris, Plattsmouth, or Beatrice have been able to hold Easton Mains under 100 yards rushing in their respective outings. Mains 166 yards/2 TDs vs. Waverly, 110 yards/1 TD against Norris, his 150 yards/1 TD vs. Plattsmouth and the 217 with 2 scores in the Beatrice game have the senior dual-threat QB a whopping 643 yards rushing in just 4 games.

Appears to me Mr. Mains is on his way to that 1000 yard rushing mark in the Wolves 2nd year of competition.

*Dylan Heine-Wynot - Blue Devils quarterback riddled the Randolph defense with his 15 of 17 passing for 268 yards, 5 touchdowns statline last Friday. Wynot jumped on the Cardinals 51-16 at the half and the rest was a breeze for Heine and the boys.

Heine already has 797 passing yards with 11 touchdowns this season.

*Leyton Rohde, Cooper Slingsby, Caden Holm, Calvin Finley-Ansley-Litchfield - This quartet played a huge role in the Spartans big 44-40 win over Pleasanton, especially Rohde and Slingsby. Rohde, the three year starter at QB, hit 8 of 19 passes for 184 yards and 3 TDs. Yes, the kid threw 3 picks in the game but the scoreboard still read 44-40, Ansley-Litchfield didn’t it?.

Rohde’s scoring connections were with Caden Holm (60, 12 yards) and Cooper Slingsby (22 yds) with Holm being his favorite target, catching 4 aerials for 93 yards (2 TDs)

Senior Cooper Slingsby was just an animal in this game, rushing for 118 yards on 24 carries and a big time 1 yard TD late in the game. The talented senior also caught a 22 yard TD pass in the game. On defense, Slingsby was all over the field, logging an amazing 20 tackles with 13 solo crunches.

The Spartans Calvin Finley was also a stud in this win, catching 3 passes for 51 yards, returning a punt 41 yards for a touchdown and making 10 tackles on defense.

*Keaton Persson, Trevin Weddle, Riley Penrose -West Point-Beemer - All three West Point-Beemer backfield buddies ran for over a hundred yards plus in the Cadets wild 62-41 win over O’Neill. 5-7, 145 pound junior Keaton Persson led the Cadets 452 yard ground attack with 183 yards and 4 touchdowns on just 8 carries. You had to figure all of Persson’s TD gallops were of the long distance variety and they were indeed, covering 56, 30, 39 and 43 yards.

Despite losing some terrific seniors to graduation (including All-State QB Jesus Barrigan), West Point-Beemer continues to feature a punishing ground attack led by Pensrose and his 526 yards after 4 games. Weddle is also up there with his 309 yards and Persson is also above 250 yards rushing this season (252).

*Landon Classen-O’Neill - Junior QB Landon Classen was certainly the catalyst in the O’Neill offensive attack in that 62-41 loss to West Point-Beemer. The skillful, dual-threat quarterback rushed for 129 yards and 3 touchdowns on 18 totes and completed 9 of 21 passes for an additional 128 yards with another three Eagle scores.

Landon’s 2 yard run and 34 yard scoring strike to Sean Coventry in the 2nd quarter even had the O’Neill Eagles on top at halftime, 28-21.

West Point-Beemer then outscored O’Neill 41-13 in the 2nd half, but Classen kept producing with touchdown passes to Sean Coventry (13 yds) and Clay Shaw (23 yards) in the 4th stanza.

For the year, Landon Classen has thrown for 555 yards with 5 TDs and rushed for another 316 yards with 7 TDs for the 1-3 Eagles. Oh yes, he also has 25 tackles on defense with 18 solo stops in there.

*Evan Kastens, Eddie Johnson, Trey Jackson, Riley Marsh-Waverly - Kastens and Marsh combined for 285 rushing yards and 3 touchdowns and Trey Jackson threw for 3 more scores as Waverly held off GI Northwest 41-34 at Waverly. Kastens, just a sophomore, sped for 150 yards on 20 carries with touchdown runs of 8 and 3 yards, while Eddie Johnson was adding 135 yards on 13 carries that included an electrifying 80 yard touchdown run.

This was a monumental win for Waverly, who is still playing without All-State quarterback candidate Cole Murray. On defense junior Cooper Skrobecki had a big game with a fumble recovery and an interception.

*Hyatt Collins-Adams Central - The 192 pound junior All-State candidate carried the ball 23 times for 192 yards but could not get that elusive touchdown in the Patriots 18-15 loss to a very good Cozad team. Collins, who has 11 hundred plus rushing games in his brief career, is well on his way to a second straight 1000 yard rushing season with his 4 game total sitting at 679 yards.

Collins ran for 1,538 big ones as a sophomore but suffered an injury and missed the Patriots quarterfinal playoff game, had just one carry in the Kearney Catholic semifinal game, and was still hobbled in the C-1 Championship game against Pierce.

Hyatt Collins is a remarkable running back who could chase the 5,000 yard career rushing mark with some health and deep playoff runs this year and next.

*Levi Belina-Howells-Dodge - One week after knocking off the mighty Cross County Cougars 40-38, superback Levi Belina was at it again in the Jags 46-26 win over Wisner-Pilger. Belina bettered his 206 rushing yards performance in the Cross County game by escaping for 246 yards on 28 carries and SIX touchdowns against Wisner-Pilger.

One word to describe this kid. BALLER.

*Beau Ruskamp-Wisner-Pilger - Quarterback Beau Ruskamp did his best to keep Wisner-Pilger in that Howells-Dodge game before the Gators finally had too much Levi Belina and fell 46-26. Rushkamp, a 5-11, 150 pound senior, completed 6 of 7 aerials for 103 yards with TD passes of 48 yards to Spencer Batenhorst, 34 yards to RB Hunter Palmer and a 7 yard strike to Carson Urwiler. Beau also ran for 122 yards on 14 carries in the loss to powerhouse Howells-Dodge

*Michael Andel-David City Aquinas - Legendary Aquinas head coach Ron Mimik always stresses TEAM football, but it certainly doesn’t hurt to have an O-Line that blocks and a fullback like Michael Andel to turn to in crunch time.

Trailing 14-10 to Crofton at the 9:09 of the 4th quarter, it took the Monarchs just 4 plays to go 80 yards for a touchdown, capped off by Andel’s splendid 65 yard scoring dash. Crofton ate up 3:03 on the ensuing drive, but Aquinas came right back, moving 63 yards in 5 plays, capped off by Michael Andel’s 37 yard TD sprint.

*Jimmy Allen-Crofton- The amazing Jimmy Allen kept Crofton in that Aquinas game with his 172 yards on 32 carries and two touchdowns (5, 5 runs). Allen, whose Dad Tom Allen coaches the Warriors, was an All-State selection at running back a year ago, compiling 1,402 yards rushing. This lad, Jimmy Allen, is a tremendous football player my friends! I mean REALLY good.

*Riley Sudbeck, Jake Peitz -Hartington-Newcastle - 6-2, 170 pound sophomore quarterback Riley Sudbeck completed 11 of 21 passes for 165 yards and a touchdown and rushed 23 times for 102 yards and TD runs of 4, 3, and 3 yards in the Wildcats exciting come from behind 34-30 win over Plainview. Trailing 28-20 midway through the 4th quarter, Sudbeck bolted into the endzone for a pair of touchdowns to complete the comeback win.

Jake Peitz caught 5 of Sudbeck’s 11 completions for 110 yards, one being a 23 yard scoring catch with just 3 seconds left before halftime. That touchdown prevented a 22-0 Plainview lead going into the halftime break and gave Hartington-Newcastle momentum entering the 2nd half.

Lyons led the Diller-Odell receivers with 60 yards. Preston Engleman ran the ball 10 times for 108 yards, which included scoring journeys of 13 and 48 yards, all part of Diller-Odell’s 313 yards of total offense.

*Cy Hughson, Shane Gluth-Sioux County - Cy Hughson, the 5-10, 140 pound sophomore quarterback, was outstanding in Sioux County’s 44-40 loss to Guernsey/Sunrise, Wyoming. Hughson completed 12 of 27 passes for 226 yards and three touchdowns and rushed 29 times for another 90 yards with 4 ground touchdowns. Hughson’s scoring runs came from 4, 11, 3 and 6 yards out.

Cy’s favorite passing target in the game was classmate Shane Gluth, who caught all 12 of Hughson’s completions,which naturally accounted for all 226 of Hughson’s passing yards. Gluth, who is 5-10 and 170, had TD receptions of 16, 33 and 30 yards in the loss.

*Patrick Vinson to Ryan Schmit-Osmond - The Patrick Vinson to Ryan Schmit connection was working in the Tigers 44-14 victory over Winside. Just a week removed from a blowout loss to Riverside, QB Patrick Vinson had some time to throw against Winside and cashed in on the pass protection, completing 8 of 17 tosses for 124 yards and all three touchdown throws to Schmit. Just like Shane Gluth from Sioux County, Schmit was on the receiving end of all 8 Vinson completions, compiling 124 yards with touchdown catches of 23, 53 and 11 yards.