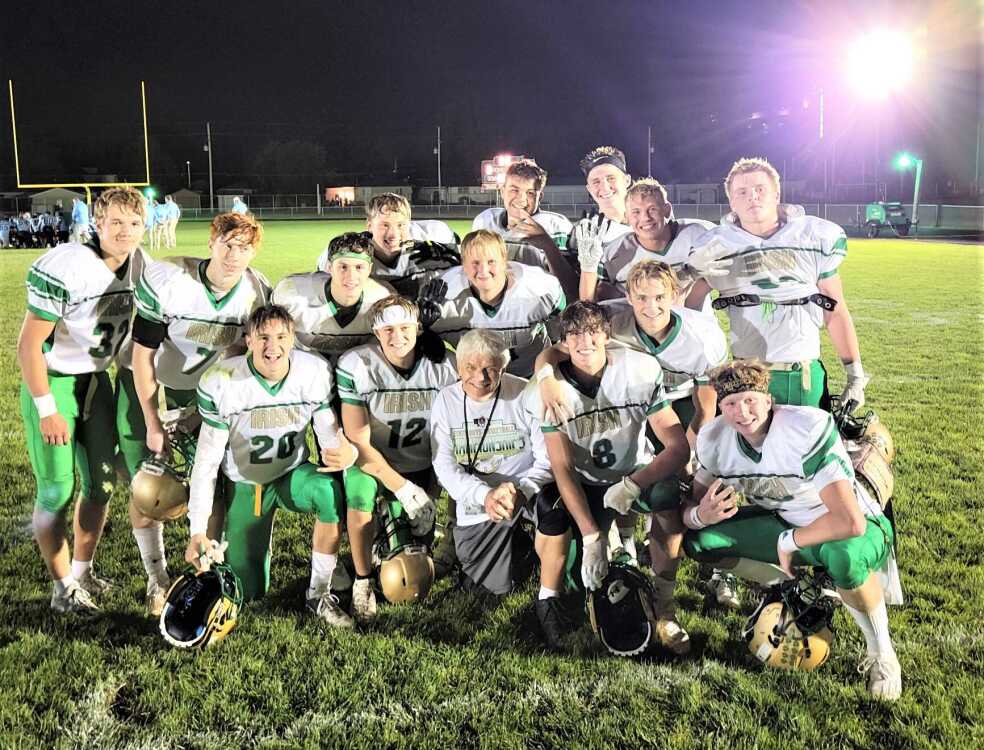 The word around the state’s Class C-2 circles this season is that North Platte St. Patrick has an exceptional offensive line. That word was right, and the Irish needed that outstanding O-Line with their exceptional “push” tonight because Grand Island Central Catholic proved to be a stingy host when it came to defense.

With that GICC defense shutting off the outside lanes to prevent sophomore sensation Jackson Roberts from breaking the long distance scoring run, St. Pats had to go back to smash mouth, up-the-gut, 3 yards and a cloud of dust football, and it paid off in the end with a hard fought 29-0 win over the Crusaders.

The game, played on what is known as the “Sader Sod” west of the high school, used portable lighting, which appeared to be similar to highway construction lighting.

Putting it simply, it was a dimly lit football field, which was a shame because the actual field itself was in tip top, pristine condition.

Penalties plagued GICC all night. In fact, the Crusaders were flagged for holding on the opening kickoff. Then, on the opening play from scrimmage Central Catholic was again flagged for a holding call, nullifying a terrific 20 yard run by fleet-footed quarterback Brayton Johnson.

Following an incomplete pass and losses of 6 and 9 yards on running plays, the tone was set for the first half when the Crusaders were forced to punt from their own 21.

St. Pats had a short 32 yard field in front of them on their opening drive and it took the Irish just 6 plays to hit paydirt, with veteran quarterback Jake Heiss taking it in from a yard out.

Central Catholic did put together a nice drive late in the opening stanza with Brayton Johnson ripping off consecutive gains of 17 and 14 yards, but a motion penalty hurt the momentum and Isaac Herbek was once again forced to punt the ball away.

The Irish scored twice in the 2nd quarter, the first coming on a 67 yard drive that really showcased the outstanding blocking of that St. Patricks O-Line, accompanied by a clever mix of great running by Jackson Roberts, Gaven Nutter and Jake Heiss.

The powerful push of that line on that first St. Pats drive was reminiscent of a rugby scrum, and was absolutely necessary due to the GICC defense holding their ground.

The drive, which consumed 5 minutes and 25 seconds, culminated with a Gaven Nutter 1 yard touchdown plunge at the 3:45 mark of the 2nd quarter.

The Irish added one more score after killing a nice GICC offensive drive at the St. Pats 21 yard line.

St. Pats quarterback Jake Heiss then went to the air with just 1:52 remaining before halftime. The Irish basketball standout, who attempted only three passes all evening, nailed speedy junior Will Moats with completions of 36 and 12 yards before Moats sailed around the left side of the St. Pats line on a 12 yard jet sweep.

That set up a 7 yard touchdown run by Jackson Roberts with just 15 seconds left in the first half. Gaven Nutter then blasted in for the double PAT and North Platte St. Pats had themselves a 22-0 lead at the halftime break.

Both Will Moats, who incidentally grabbed a 2nd place in the Class D 110 meter high hurdles last May, looked very sharp in the first half as did Gaven Nutter.

Nutter, who is just 5-6 and 150 pounds, runs like a 180 pound fullback, carrying defenders with him for those tough yards after contact.

The GICC defense forced a turnover on the second play of the 3rd quarter, pouncing on a loose football at the midfield stripe.

Brayton Johnson then went to work. The poised Crusader quarterback completed passes to All-State basketballers Isaac Herbek and Marcus Lowrey and track standout Gage Steinke then ripped off a nifty 14 yard gain up the middle.

The St. Pats defense was then flagged for a pair of infractions that eventually placed the ball on the Irish one yard line.

The St. Pats defense then stiffened and a linebacker blitz probably forced GICC to suffer a fumble on a bad exchange between QB Johnson and one of the Crusader backs.

An Irish player pounced on the loose ball and Central Catholic’s best drive of the night was ended.

St. Pats then fashioned a killer 15 play, 97 yard scoring drive that ate up 8 minutes, 49 seconds, stretching from the 6:49 mark of the 3rd quarter and concluding at the 10 minute mark of the 4th quarter. Jackson Roberts then produced his second scoring run of the dark night, a 6 yard power dash.

The Irish, who led 29-0 after the Roberts touchdown, had just one more possession in the 4th quarter and it was a dandy.

It began at the St. Pats 25 yard line with a Jackson Roberts 5 yard run and showcased the Irish offensive line with their patented “full speed ahead” push. Gaven Nutter then bolted ahead for 7 before Jackson Roberts burst into the relentless GICC defense for gains of 10 and 4 yards.

At that point, after Jackson’s helmet flew off for the 2nd time, Coach Kevin Dodson called it a night for the sophomore sensation. Not a problem though, as Will Moats carried twice for 13 yards and the hard grinding Gaven Nutter was then at his best, hitting the gut for gains of 11, 5, 3 and 2 yards.

But the stubborn GICC defense eventually held at their own 20, forcing Jack Heiss to attempt a 37 yards field goal that was just short and off to the left, as it disappeared into the darkness.

Jack Heiss attempted just three passes on the night, completing two of those to Will Moats on the same drive for 48 yards.

Central Catholic was held to 62 yards on the ground and 52 through the air by the stout North Platte St. Patricks defense.

Next week the 0-4 Crusaders, whom I feel are better than their record indicates, will host Gibbon at Senior High’s Memorial Stadium, while St. Pats returns to their friendly confines to host an 0-4 Bridgeport squad, losers to Gibbon (28-20) Friday night.