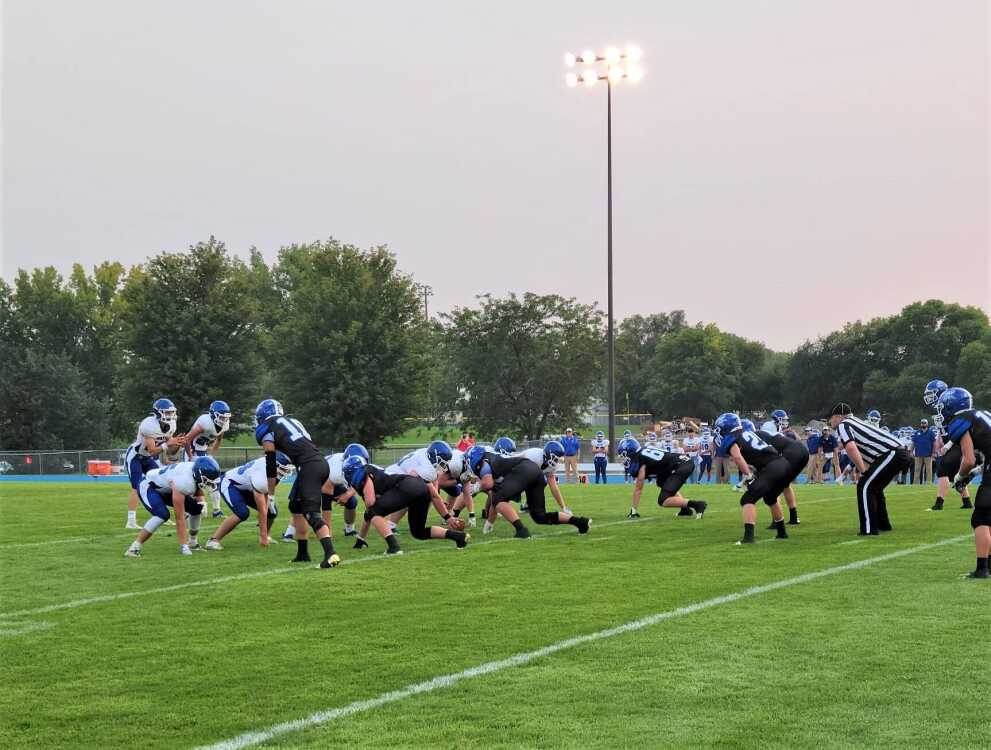 Wayne quarterback Tanner Walling (far left, waiting for the ball) awaits the snap from center prior to firing a touchdown pass to Alex Phelps in the Blue Devils 30-17 win over Columbus Lakeview last Friday.

I keep thinking how prolific this group of offensive lineman looked in that Lakeview victory. These are big dudes, folks and big dudes that can clear openings for guys like Bartos, Phelps and Eli Barner. Not only that, but these guys did a top notch job of protecting senior QB Tanner Walling, a flame thrower who can rip your defense to shreds if they aren’t in the right coverages.

This Wayne team really impressed me last Friday despite suffering some big graduation losses coming into 2021. If super coach Russ Plager and his staff can continue to guide this special group through a killer schedule, and the Blue Devils can stay healthy, Wayne should make some noise in the postseason. AGAIN.

*Tyson Denkert, Trey Kennedy-Kenesaw - Another huge (typical) night for Denkert, the two time All-State star. In the Blue Devils 70-20 victory over a young, but talented Fullerton squad, Denkert rushed 15 times for 175 yards and 4 touchdowns. Tyson also completed 3 of 5 passes for 117 yards and another score.

Trey Kennedy added 90 yards on just 6 carries, half of which went (3) for touchdowns.

Denkert has amassed an unbelievable 5,889 total yards in 31 career games. On defense Tyson has 271 career tackles, 10 interceptions, and 8 fumble recoveries and has issued a gazillion Excedrin headaches with his jarring hits.

Kenesaw has produced so many great football players over the years and that is a high tribute to longtime head coach Craig Schnitzler.

*Levi Belina-Howells-Dodge - Senior Levi Belina posted the sixth 200+ rushing game of his career in the Jaguars 40-38 victory over Cross County. Belina escaped for 206 yards on 26 carries with TD runs of 2 and 27 yards in the huge win. Levi also led Howells-Dodge with 12 tackles last Friday with Lance Brester and Nathan Hegemann close behind with 10 stops each.

Hall of Fame coach Mike Spiers has those Howells-Dodge boys rolling again in 2021!

*Shayden Lundstrom, Haiden Hild-Cross County - QB Shayden Lundstrom was an absolute BEAST in the Cougars 40-38 loss to Howells-Dodge. In the absence of injured 2000 yard rusher Carter Seim, all Lundstrom did was rush for 176 yards on 21 carries and two touchdowns, complete 5 of 11 passes for 96 yards and a TD, run in a pair of double PATS, compile 43 yards on punt returns and pile up a massive 134 yards on kick returns for an unimaginable 453 yards of total offense.

Lundstrom’s scoring runs covered 20 and 73 yards and the TD scoring pass to All-Stater Cory Hollinger was from 5 yards out. Haiden Hild was no slouch himself, rushing for 113 yards on 28 totes with touchdown runs of 2, 4 yards.

Damon Mickey led the defense with 8 tackles (2 for losses), sophomore All-State candidate Alex Noyd matched Mickey with his 8 tackles (7 solos!), and Izaac Dickey added 7 stops, Lundstrom chipped in with 6 tackles. Cory Hollinger and Hild both had 5 tackles with 3 solo stops.

Blue Devils QB Nate Kramer was deadly throwing the ball in this one, hitting 7 of 9 attempts for 185 yards, which included scoring tosses to Owen Prince and Clyde Hinton. On the defensive side it was 5-11, 180 pound Cameron Augenbaugh leading the way with 12 tackles, four of which were for losses.

Senior classmate Samuel Payne recovered a pair of fumbles and Lane Zimmer picked off a Brayton Johnson aerial to aid the Bronco defense.

*Isaac Kracl-Crete - Ran wild again in the 46-31 loss to Seward. All Kracl did in that contest was rush for 230 yards and 3 touchdowns on 26 carries. Kracl’s scoring runs covered 7, 40 and 85 yards, the latter coming on a hook and ladder play in the critical 4th quarter. Kracl also had a 94 yard pass reception.

The senior now has 585 yards in three games for the 1-2 Cardinals.

*Jake Garcia-Omaha Gross - Junior All-State candidate ran for 169 yards on 27 touches with a pair of touchdowns (6, 2 yards) in the 55-27 loss to Omaha Skutt last Thursday. You may recall, the punishing Garcia bolted for 1,051 yards last season as a sophomore. This kid can flat out run the football, friends!

*Carlos Collazo-Aurora - The Huskies do not release stats that I can find, but I know Collazo ran at least 8 times for 136 yards in the Scottsbluff game unless there were penalty flags that I didn’t catch on film. The Aurora senior ran unbelievably tough and was a standout on defense in the loss to Bennington too. Bottom line here is this. I don’t need stats to tell you Carlos Collazo is a BALLER.

If you have the opportunity to see this young man play live, do it! Carlos is such an inspiration to the game of high school football the way he approaches the game. Any coach in the state would take a dozen Carlos Collazos on their team.

*Keegan McDonald, Hunter Mortimer-Weeping Water - McDonald, a 180 pound junior running back, and QB Hunter Mortimer combined for 396 yards rushing in the Indians 60-44 win over Johnson County Central. McDonald, who posted his 2nd big ground game in a row, was outstanding with his 240 yards and 5 TDs on 19 carries. Three of McDonald’s scoring runs covered 46, 43 and 56 yards and featured the junior bowling over Thunderbird defenders along the way.

Keegan McDonald now has 475 yards rushing with 7 TDs after 3 games. Mortimer is at 320 ground yards with an additional 345 passing with 7 TDs. The Indians are 3-0 right now ranked #10 in Class D-1 according to the Omaha World-Herald and prep rater extraordinaire, Stu Pospisil.

In the Cardinals 46-0 trouncing of DC West, senior RB Cody Miracle ran for 126 yards 2 touchdowns on just 8 carries, QB Benes added 115 yards on 12 touches and a TD and sophomore speed burner Parker Borer chipped in another 72 big ones on just 7 totes with two touchdowns.

That’s THREE backs over 23o yard rushing after just three games for Boone Central. Right now Borer leads the way with 347 yards on just 25 carries (13.9/ypc). Benes is next with 245 yards, followed by Miracle’s 230 ground yards. As a team the Cardinals have rushed for 886 yards on 98 touches (9.0/ypc), BUT…….don’t stack that line of scrimmage fellas because Brandon Benes has completed 60% of his 40 passes for 262 yards and 3 TDs this season.

Coach Hudson has his Boone Central team rated #9 in the OWH Class C-1 ratings this week. I have to get up to God’s Country for a Cardinals game soon, like maybe September 24th when Pierce comes to town.

*Henry Kroeger-Elkhorn High - Sprinted 90 yards for a touchdown with 6:15 left in the ballgame to lift the #4 Antlers to a 14-13 win over a very high caliber #3 Waverly squad. The two Class B kingpins were locked in a splendid defensive battle all night until Kroeger’s big touchdown scamper, a run where he displayed good breakaway speed.

Waverly incidentally, was playing without the services of starting QB Cole Murray.

*Tanner Frahm-Plainview - Pirates junior quarterback Tanner Frahm is kind of a “Here’s the good news”, “but then Here’s the bad news” type of story. The good news for Plainview is that Tanner Frahm will absolutely rip your pass defense to pieces with his pinpoint completion percentage and 290 yards/4 TD per game average. The bad news in 2021 actually started as early as last season when Will Gunning, one of Class D-1’s finest players, tore an ACL and would end up missing all of this current football season, The other happened this summer when ace RB/LB Matt Christiensen transferred to defending C-1 champion Pierce. So, the result of those pieces of bad news has ended in Plainview’s defense giving up big losses to Ainsworth (88-44), Neligh-Oakdale (74-32) and Creighton (52-36) to open the 2021 season.

Nonetheless, Tanner Frahm continues to post video game-like passing numbers, like his 26 of 36 passing for 278 yards and 4 TDs against Creighton last week. And the dude can run too (196 yards/3 TDs) and make tackles (41 total in three games), so he’s doing his part.

Maybe the Pirates and Tanner Frahm can get something going on defense against Hartington/Newcastle this week. Lord knows they deserve it.

*Tanner Pfeifer, Spencer Engle-Humphrey St. Francis - All-Stater Tanner Pfeifer was a monster in the Flyers 58-20 win over Palmer as St. Francis scored on it’s first 6 possessions of the contest. Pfeifer hit the end zone on runs of 3 and 29 yards and returned not ONE, but TWO kickoffs for touchdowns (63, 62 yards out). Tanner also hit Jaden Kosch for a 28 yard scoring strike.

Spencer Engle scored from 1 and 14 yards away and, not to outdone Pfeifer, returned a kickoff 71 yards for a TD.

*Diego Gastelum, Douglas Chicas-Madison - Junior QB Diego Gastelum shredded the Niobrara-Verdigre defense with his 156 yards rushing and 4 TDs on just 6 touches. Diego and the boys made quick work of the Cougars by bolting to a 42-0 halftime lead, setting up the 2nd half with a running clock. Diego’s touchdown runs came from 45, 50, 16 and 30 yards away.

He also tossed a pair of touchdown passes to Douglas Chicas in the game (34, 16 yards). The Dragons are now 1-1 on the year.

*Abel Gonzalez, Tristen Ray-Lewiston - They had to be rolling out the red carpet, shooting fireworks and calling for a big time celebration when the Tigers returned to town after posting a convincing 63-24 win over Dorchester last week.

You see, Lewiston hasn’t won a football game in 24 tries, dating back to August 24, 2018 when they opened the season with a 41-26 win over Silver Lake. Since that day, Lewiston opponents have piled up 1,416 points, or an average of 59 points every game against the Tigers.

Ray also made 10 tackles, 3 for losses, picked off another pass besides the Pick 6, and booted 5 of 8 PATS. The kicked PAT thing is huge in 6-Man football because it is worth 2 points. Running it in after a score is only worth a single point, just the opposite of 8 and 11-Man football. A field goal is worth FOUR points and of course, it’s 1st and 15 instead of 1st and 10.

There is your 6-Man football lesson for the day and we wish continued success to those Lewiston Tigers!

Oh yes, we think this young man can flat out play the game.

*Sam Souerdyke-Thayer Central - 6-2, 175 pound FRESHMAN rambled for 165 yards on 14 carries and 4 touchdowns in the Titans 64-26 win over Humboldt-TRS. The impressive Souerdyk has already run for 326 yards and 7 touchdowns in 2021, caught one pass, a 52 yard TD grab, made 14 tackles on defense, had an interception and punted 9 times for an average of 35 yards a boot.