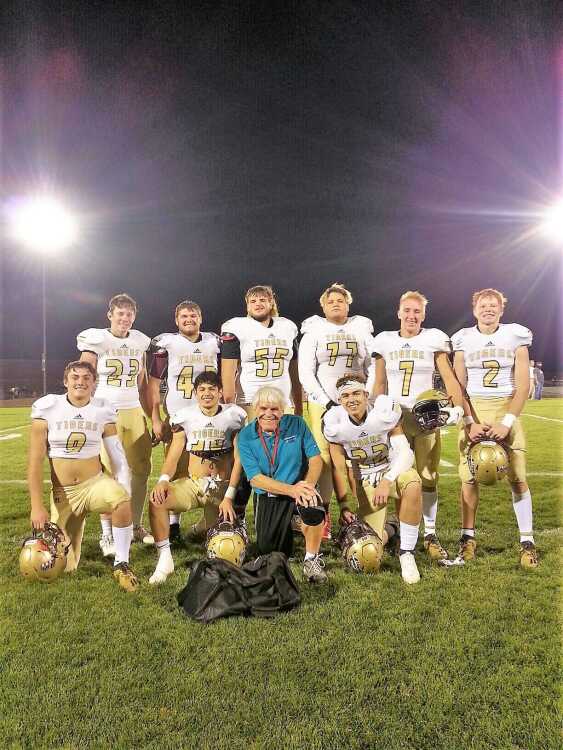 *Serbando Diaz, Quade Myers, Corbin Horner, Keegan Krutsinger, Delton Haines-Dundy County/Stratton - Serbando Diaz gauged the Nebraska City Lourdes defense for 282 yards on 33 carries plus 3 touchdowns in the Tigers 48-30 win over the Knights. Quade Myers was also a standout, completing 10 of 19 passes for 118 yards and touchdown strikes to Corbin Horner (5 yards) and Lincoln Waters (15 yards). Myers also carried 18 times for 81 yards and a pair of rushing touchdowns while Horner led the receivers with 92 yards on 6 catches.

Of course both Keegan Krutsinger and Delton Haines, otherwise known as “Butter and “Syrup, The Pancake Brothers, were constantly clearing the way for Serby, Quade and other Dundy ball carriers.

On defense, Diaz made 11 tackles, Horner, the sophomore, added 9 more, Keegan Krutsinger added 7 crunching stops, while Quade Myers and Delton Haines each chipped in 5 tackles. In addition, Quade Myers had two interceptions, Lincoln Waters and Bobby Schneider each picked of one pass, and big Delton Haines recovered a fumble.

With his big night, Serbando Diaz became just the 53rd running back Nebraska high school football history to crack the 5000 yard rushing mark and he did it in just 34 games. Serby’s career rushing total stands at 5,114 yards as we speak, with 86 touchdowns.

*Isaac Noyd, Carter Seim, Christian Rystrom-Cross County - The unbeaten Cougars racked up 539 yards on the ground in their 54-16 Second Round playoff win over Cambridge. Isaac Noyd sprinted for 210 yards on 12 carries (17.5/carry) and touchdown runs of 72 and 43 yards. Running mate Carter Seim was right behind with 207 yards on 10 carries (20.7/carry) with scoring dashes of 61, 46 and 75 yards. Cross County averaged 13.9 yards carry as a TEAM.

Incidentally, Cross County did throw one pass in the game, that being a 10 yard touchdown toss from Shayden Lundstrom to Cory Hollinger.

It may be worth mentioning that young freshman Alex Noyd is the starting center on offense and also starts in the defensive line (NG?). The lad really plays well beyond his age in my humble opinion.

The correct answer would be C) None of the above, because I’m pretty it’s Dad, who is Charles Noyd, who an Class C-2 All-State offensive guard for Stromsburg in 1991, and also happened to checkin at 6-2 and 215 pounds on that 1991 All-State team.

In a game, bigger than life life, featuring 2019’s D-1 and D-2 defending champions, it was the Osceola defense that came up with a stop of St. Francis QB Trevor Pfeifer at the Bulldogs 2 yard line on a 4th and one play with just 3 seconds remaining in the contest.

Both All-State defender Kyle Sterup and Carson Watts made 15 tackles for Osceola in the big win, with Sterup dishing out 9 solo stops. Both Reed and Rathjen added 8 tackles and Zelansey chipped in 7.

That sets up a HUGE battle for Stanton in Benkleman on Friday afternoon with Class D-1, #1 seed Dundy County/Stratton. Kickoff is set for 2:00 Mountain Time.

*Caleb Busch-Burwell - Junior RB exploded for 301 yards on 30 carries and touchdown runs of 11, 18, 45, 9, 50 and 14 yards in the Longhorns playoff win over a fine, but young Howells-Dodge team. Coach Mike Spiers young Jaguars actually had an 8-2 first quarter lead before Burwell erupted for 48 points in the middle two quarters (21-27) before the Longhorns capped things off with the 50-14 triumph.

Thus far in 2020, Caleb Busch has rolled fo 1,642 yards on 174 carries and 38 touchdowns for the undefeated Burwell Longhorns. And YES, QB Barak Birch CAN throw the football. He has completed 65 of 108 passes for 1,001 yards and 29 touchdowns, so if you are seeing this Burwell team in action soon and hoping they were primarily a ground attack, that’s just wishful thinking.

*Tyson Dankert-Kenesaw - Raced for 276 yards on 20 carries with scoring jaunts of 74, 45, 35 and 16 yards in the Blue Devils 64-26 over Allen. Dankert also fired a 25 yard touchdown pass to sophomore Joe Katzberg and returned a fumble 25 yards for another score. Dankert also made 7 tackles on defense for super Coach Craig Schnitzler’s Kenesaw squad.

Thus far in 2020, Tyson Dankert has 1,879 yards on just 156 carries (12 a pop) and 29 touchdowns. He has also passed for an additional 397 yards and 10 TDs (just 2 INTs), has a monster 90 tackles on defense with 3 interceptions and that fumble recovery TD in the Allen game. In fact, in the past FOUR games alone, Tyson Dankert has rushed for 1,081 yards and scored 15 touchdowns.

Dankert also kicked off 93 times with an average of 41 yards a boot with 13 touchbacks and has kicked 7 of 11 PATs.

This game was a back and forth affair for the entire first half. Medicine Valley actually took a 6-0 lead, then regained leads of 14-8, 22-16 and 28-22 before Central Valley reeled off the next 28 unanswered points to take a 56-28 advantage forty seconds deep into the third quarter.

Tyce Westland, the son of super head coach Ricci Westland, has 38 catches for 821 yards and 15 touchdowns despite the 2019 All-Stater missing some time this season with injuries.

In case you were wondering? Pleasanton is a good football team, folks.

In the Trojans 40-12 win over Laurel-Concord-Coleridge, Jack Holsing went off for 175 yards on 20 carries and two touchdowns while Siems, a 1000 yard rusher a year ago, added 169 on 22 touches and a score.

Siems, who CAN throw the ball, also completed 4 of 9 passes for 92 yards and a pair of aerial scores in the win. Grant Lewandowski caught both of Siems scoring tosses.

*Aiden Hedstrom-O’Neill St. Marys - 6-2, 180 pound junior Quarterback ran 32 times for 167 yards and scoring runs of 5, 6 and 38 yards in undefeated St. Marys 34-24 win over Bloomfield. Hedstrom also connected on 8 of 19 passes for 124 yards and a 10 yard scoring strike to Isaac Everett. Hedstrom also had 8 tackles on defense, but Adam Everett (12 Tackles) and Connor Semin (10 stops) led the way on that side of the ball.

To date, Aiden has 664 passing yards (13 TDs) and 1,006 yards rushing with 22 touchdowns. FOUR other Cardinal running backs have at least 400 yards rushing, making this team a lethal opponent for anyone in the playoffs. St. Marys travels Wolbach Friday to meet D-2, #1 Central Valley, who is also unbeaten at 8-0. (6:00 PM kickoff)

*Julien Hearn, Aiden Kuester-Neligh-Oakdale - WR/RB Julien Hearn ran for 146 on 17 carries and 3 touchdowns, caught 6 passes for 80 yards and another score, and logged 12 tackles on defense, as the Warriors pulled away from a 44-44 third quarter tie to defeat a strong Hi-Line football team, 72-50.

Sophomore quarterback sensation Aiden Kuester (pronounced Q-ster?) completed 14 of 22 passes and that TD to Hearn but was picked off 3 times in the game, very uncharacteristic for the Neligh-Oakdale ace. Kuester had only 5 INTs coming in with 27 touchdowns.

Dane Pokorny has rushed for 150 times for 1,503 yards and 29 touchdowns in 10 games for 10-0 Sandhills-Thedford. The Knights are another team that has three other running backs with at least 400 rushing yards in 2020. Couple that with Grant Ahlstorm’s 636 yards and 12 touchdowns through the air, and you have one dangerous Nebraska sandhills football team.

*Jacob Diessner-Spalding Academy - Senior Quarterback ran 22 times for 156 yards, passed for another 134 yards and made 16 tackles in the Shamrocks 40-16 loss to Creek Valley. Diessner closed out his remarkable 6-Man football season with 1,260 passing yards (22 TDs) and 1,897 rushing yards with 36 touchdowns. Diessner accumulated 3,191 Total Yards, which still currently ranks him 2nd Nationally in that category.

*Owen McDonald-McCool Junction - Ran for 125 yards on 10 carries and 3 touchdowns in the Mustangs 83-24 victory over Lincoln Parkview Christian in the opening round of the 6-Man playoffs. McDonald also caught a touchdown pass, returned a kickoff 76 yards for a touchdown, and returned an interception for a score. McDonald also kicked 15 PATs.

*Luke Kasten-Potter-Dix - 6-3, 150 pound sophomore quarterback threw only 11 passes in the Coyotes 66-34 win over Wallace, but EIGHT of those went for touchdowns, totalling 125 yards. Kasten also ran 10 times for 125 yards, and made 6 tackles in the win.

Potter-Dix hosts 5-2 Cody-Kilgore this Friday in the Six-Man quarterfinals with a 5:00 MST kickoff

*Remington Schimonitz, Keegan Schow-Paxton - Schimonitz ran 14 times for 158 yards and a TD in Paxton’s hard fought 44-38 win over SEM, the 2nd victory in a week’s time over the Mustangs. QB Keegan Schow also completed 8 of 15 passes for 104 yards and 3 touchdowns in the playoff win for Paxton.