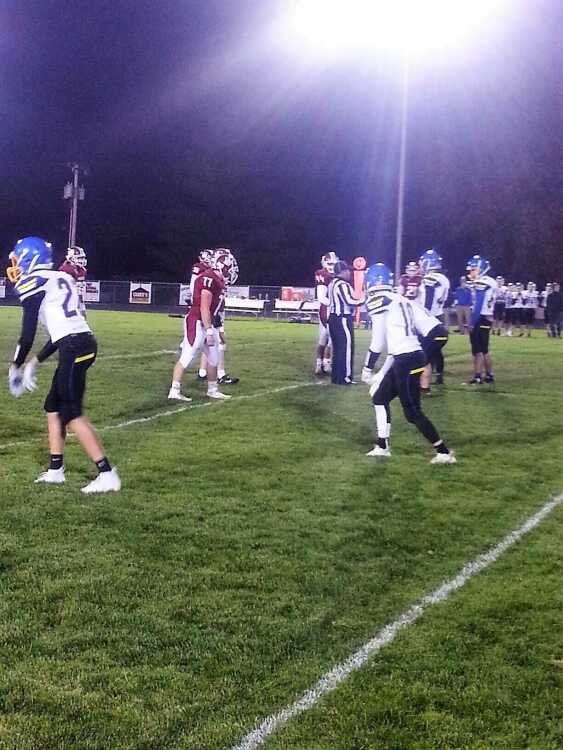 Fullerton's Ty Engel (#77/Cardinal Red jersey) prepares to crash into the Nebraska Lutheran backfield in Thursday nights 80-26 win by the Warriors over the Knights.

It appears that Fullerton was not only prepared to handle Nebraska Lutheran’s vaunted high octane passing offense, but the Warriors own offense was more than rarin’ to go in the regular season finale for both schools.

Rarin’ to go may be an understatement, as Fullerton jumped out to a 44-6 first quarter lead and never looked back. By the time halftime rolled around, the Warriors had piled up 11 offensive possessions, scoring on the first 10 of them. Only a merciful spike of the football on the 11th possession (at the Nebraska Lutheran 20) prevented Brandon Siegel’s Fullerton squad from putting 80 points on the board in the opening half.

Sophomore Brady Cook racked up 123 yards on 9 carries and 5 touchdowns in the first half alone. Fullerton quarterback Isaak Norman was just as impressive, completing 5 of his first six passes for 194 yards and pair of touchdown tosses, before Fullerton ended the half going 6 of 10 through the air with all of their 266 passing yards coming in the first 24 minutes.

Cook would finish the game with the game with 164 yards rushing and those 5 first half touchdowns. The sophomore also saw some time at the QB slot in the 2nd half but suffered three lost fumbles.

Senior quarterback Isaak Norman tossed three 1st half touchdown passes and scored once on the ground himself, while junior Grant Pickrel, who played some quarterback himself, latched on to a pair of scoring passes from Norman, as well as rushing for a 5 yard touchdown, sandwiched in between his two scoring receptions.

Pickrel was also a force on defense, pirating two Nathan Helwig aerials. Helwig, incidentally, came into tonights contest leading all of Eight-Man 2 with 1,383 passing yards and 18 touchdowns, but left town having completing just 19 of 40 aerials for 105 yards, a single touchdown and those three interceptions.

You may have to dig very deeply into the Fullerton football history books to find a more prolific first half as far as scoring is concerned. Despite having some top notch gridiron teams throughout the years, you would be hard pressed to find a Fullerton team that scored 74 points in the first half.

Now, the Warriors wait for Friday night’s Class D-2 action to be completed to see if their slim playoff hopes are still alive. You will recall Fullerton missed two games and two full weeks of the 2020 season with a COVID 19 outbreak at school.

Games with Osceola and High Plains were cancelled and as any football coach knows, 14 days with no practice, no lifting and no running to stay in shape, will ultimately lead to a rusty game when you finally return to the Friday Night Lights. Still, there are some playoff possibilities flickering out there for this young Fullerton team, who started just 3 seniors tonight.

Fullerton unofficially rushed for 221 yards as a team, while finishing with 266 yards through the air. Nebraska Lutheran, as a team completed 20 of 41 passees for 123 yards with one touchdown with 3 interceptions. The Knights rushed for 108 yards, paced by sophomore wide receiver Trevor Hueske, who ran for 86 yards on 10 totes and a late touchdown.

For Fullerton, it was Grant Pickrel leading the way in pass receiving with 126 yards and two touchdowns on just 3 catches. Trey Dodds added the one catch of 69 yards for a touchdown, while leading rusher Brady Cook snared one Isaak Norman pass, good for 40 yards.

The remaining pass reception of 23 yards went to, who else, Isaak Norman’s little bro Aiden Norman, who is just a freshman.