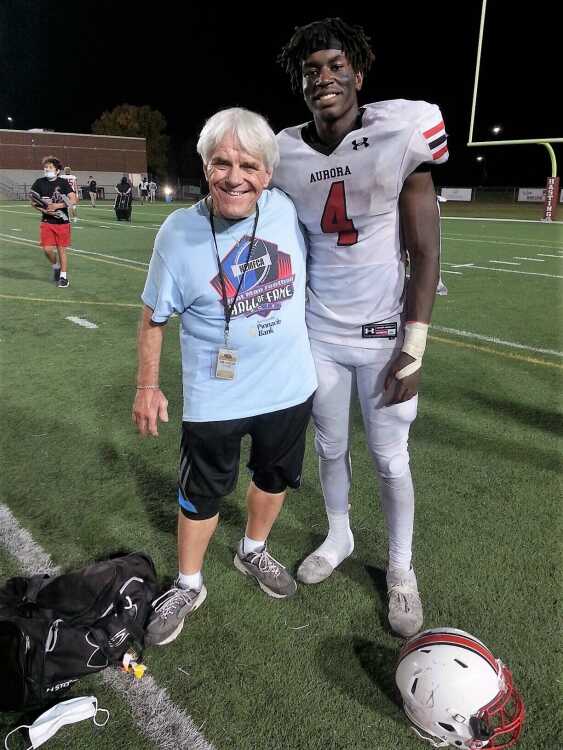 *Ethan Shaw, Mack Owens-Aurora - 6-3, 200 pound junior All-State Athlete Mack Owens rushed for 159 yards on 21 carries with touchdown runs of 6, 5, 2 and 13 yards in the Huskies 55-34 win over then #1 Hastings. Owens was also a sparkler on defense, recording at least a pair of sacks I can recall.

Quarterback Ethan Shaw completed 11 of 18 passes for 183 yards and a TD and also added 117 yards on 21 carries, plus another pair of scores covering 9 and 14 yards in the huge Aurora win.

The 5-2 Huskies have now reeled off 5 straight wins after starting the season 0-2. This football team will not be a good draw for any Class B team in the upcoming postseason. 5th rated Aurora has an excellent offensive line, solid defense and possesses two of the Class B’s top players at their respective positions in Ethan Shaw and Mack Owens.

Jake Stoner’s 32 game football career is the magnificent story of a warrior who consistently performed at a high level against all odds. Despite Fillmore Central compiling a record of 8 wins and 24 losses during his career to date, Stoner has always stood out for the Panthers.

In 32 games, Jake has thirteen 100 yard plus rushing games to his credit and an amazing career total of 3,500 rushing yards right on the nose. Stoner’s career All-Purpose Yardage total of 5,139 yards is nearly impossible to fathom, considering that 8-24 record over the past four years.

And a stat line that doesn’t even show up in the aforementioned statistical gem, is the fact Jake has made a staggering 176 tackles in those 32 games. 88 solo stops, 88 assists and 20 tackles for losses make this young man once of Nebraska’s most complete prep football players.

*Matthew Schuster-Ashland-Greenwood - The son of former Fullerton high school and Nebraska football star Brian Schuster, blasted through Wahoo for 267 yards on 19 carries and touchdown gallops of 15, 4, 86 and 57 yards in the Bluejays 47-22 thumping of the Warriors. The rushing outburst puts Matthew’s 2020 rushing total at 1,129 yards (17 TDs)

*Luke Johanssen, Keagan Johnson, Thunderbird “D”-Bellevue West - Johanssen, the Bellevue East transfer, apparently likes his new home. The 6-2, 180 pound junior was on fire in the Thunderbirds 42-7 win over Millard West. Johanssen connected on 10 of his 16 passes for 256 yards and FIVE touchdowns, as Michael Huffman’s Thunderbird machine improved to 4-0.

The Bellevue West defense was about as efficient as you could ever get, holding Millard West to just 107 total yards (91 rushing/16 passing). All-State LB Jack McDonnell led all tacklers with 10 crunches (7 solos). Ryan Rogers added 9 tackles (7 solos, 3 TFL) as did 6-1, 190 senior Christian Lilienkamp (4 solos).

The difference maker in the game could have been kicker Spencer Hogeland, who solved Adams Central’s stingy red zone defense by kicking FOUR field goals. Spencer’s scoring boots came from 23, 27, 24 and 22 yards away in the Stars upset of Class C-1, #1 Adams Central.

*Kylan Fyfe-Grand Island - The 6-1, 175 pound junior brother to former Islander and Nebraska standout Ryker Fyfe, waited patiently for his turn to earn a start at quarterback for the Islanders. The son of super GI Track and Field Coach Monte Fyfe, then took the opportunity and ran with it and simply tore things up. No, the Islanders lost a 38-35 double overtime heartbreaker to Millard North, but Kylan let everyone know he was there.

Fyfe completed 9 of 19 passes for 204 yards and three touchdowns, rushed 12 times for 143 yards with a 30 yard touchdown scamper, made 9 tackles on defense (5 solos) and punted 5 times for an average of 41 yards a boot. Who knows, he may also have driven the team bus home.

The junior dazzler’s TD passes were hauled in by Brandon Fox (83 yards), Augustine Atikpohou (72 yards) and Will Knuth (6 yards). Fox led all receivers with 3 catches for 114 big ones. Aiden McDermott also added 92 rushing yards on 20 totes with a 21 yard TD dash.

The Islander “D” was led by Ben Francl, who made 15 tackles (7 solos), Jace Chrisman, who also had 15 stops (5 solos) and of course Kytan Fyfe, who had 9 tackles with 5 solo stops.

*Rylan Aguallo-Mitchell - The Tiger speed burner torched the Ogallala defense with 296 yards on 36 carries and touchdown sprints 63, 2 and 66 yards in Mitchell’s 55-39 win over the Indians. Aguallo also returned a kickoff 90 yards for a score and caught a 20 yard scoring pass from QB Ryan Thyne. He also made 4 stops on defense and honestly, how much more can a man do in a single game?

That vaults Rylan Aguallo to the top of the Class C-1 rushing charts with his 1,325 yards (13 rushing TDs). The amazing Tiger back now has 1,712 All-Purpose Yards in 7 games for 6-1 Mitchell.

Winside is currently 5-2 on the season, but has yet to crack the crowded and tough Eight-Man 2 ratings.

Martinez touchdown tosses were caught by junior Isaac Herbek (65 yards), who led all receivers with 109 yards on 6 grabs. Junior classmate Marcus Lowrey hauled in a pair of Martinez touchdown passes covering 37 and 47 yards. RB Gage Steinke was very efficient, rushing 4 times for 54 yards with two of his carries going for touchdowns covering 3 and 44 yards. Steinke also made 7 tackles on defense.

The 4-3 Crusaders crack the Omaha World-Herald Class C-2 ratings, coming in at #10 this week.

By the way, Noyd is averaging 13.9 yards a carry while Seim punishes defenses with his 15.5 yards a pop. Seim is also a strong All-State candidate at the linebacker position as well as running back.

Noah Boyd booted the winning field goal for the Mustangs from 19 yards out. Blake Closman and Brian Perry led the Mark Chavez coached Millard North defense with 11 tackles each.

……..Up next, Part 2 of Friday Night Lights Football Heroes featuring players like Dexter Larsen of Blair, Keagan Brodersen of Ravenna, Kale Bird of Bennngton others.