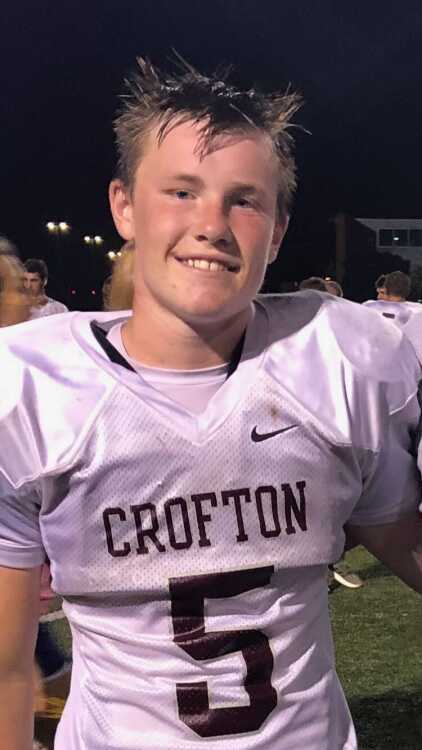 *Jimmy Allen-Crofton - Jimmy “Ironman” Allen should receive the “Ironman” award based on his rushing for 485 yards and 10 touchdowns during an EIGHT DAY span for the Warriors. Allen, a 5-9, 180 pound junior and his Crofton football team had a Monday night makeup game sandwiched in between a pair of regularly scheduled Friday night contests.

Crofton’s opening night August 28th matchup with Valentine was postponed because of some COVID issues at Crofton. The game, a regular season contest scheduled game by the NSAA, was one both Valentine and Crofton wanted to make up if possible. Both schools eventually agreed to make up the game on Monday, September 28th.

The Monday Valentine game was played 3 days after Crofton met Tekamah-Herman on September 25th, and landed 4 days prior to their meeting with unbeaten Hartington Cedar Catholic. That is three high school football contests in an 8 day span, a happening that could only occur during this COVID year.

The NSAA has a rule governing how many quarters an athlete may participate in during a week’s time, but those rules were eased in an effort to aid teams in getting all nine regularly scheduled NSAA contests played during the allotted time frame (August 28-October 23).

Anyway, Jimmy Allen displayed his Ironman capabilities by rushing for 173 yards on 23 carries with TD scampers of 12, 20, 11 and 10 yards against Tekamah-Herman to kick off the grueling 3 games in 8-day stretch. To make things eleven more difficult, Jimmy Allen is a two-way player, as witnessed by 3 tackles in theTekamah-Herman tilt.

Three days later, Allen was ready and rarin’ to go against Valentine for some Monday night football. The Crofton ironman bolted for 183 yards on 27 carries and 4 more touchdowns in the Warriors 43-7 triumph over the Badgers. Allen also was the co-leader in tackles with 8 stops and even returned a kickoff for 10 yards.

Last Friday, Crofton’s 3rd game during that eight day stretch, fatigue may have played a factor in the Warriors 45-14 loss to Hartington Cedar Catholic, but the truth of the matter is, Cedar is just that strong.

Fatigue didn’t seem to affect JimmyAllen much though, as the Croton ace ran for 129 yards on 24 carries, scored both touchdowns, made 7 tackles on defense and returned a pair of kickoffs for 37 yards.

*Noah Walters, Cooper Erickson, Austin Schneider-Lincoln East - Walters notched his fourth 300 yard plus passing game of the season as Lincoln East rallied to beat Millard West on the road. Walters completed 19 of 29 throws for 309 yards and a pair of touchdowns in the Spartans 26-25 win over the Wildcats.

Things looked a little bleak for Lincoln East when Nathan Pederson broke loose for an 87 yard touchdown with 9:13 left in the 4th quarter. Pederson’s long distance TD run gave Millard West a 25-13 lead. Fifty seconds later, Noah Walters connected with Cooper Erickson for a 53 yard scoring strike, cutting the lead to 25-20 with 8:15 left in the game.

Wide receiver Austin Schneider completed the comeback for the Spartans when he crashed across for the go-ahead touchdown with just :0.44 seconds left. Ironically, Schneider had not had a rush in 2020 before this game.

Cooper Erickson ended his night with 6 catches for 158 yards and has 20 receptions for 387 yards through 6 games for Lincoln East. And Noah Walters? All the senior QB has done through half a dozen games this Fall, is complete 99 of 174 passes (57%) for 1,926 yards and 20 touchdowns for the 4-2 Spartans, who enter the Class A World-Herald ratings this week at number 8.

*Rylan Aguallo-Mitchell - Rushed 21 times for 86 yards and scored the only touchdown for the Tigers in their shocking 28-6 loss to Gothenburg. The jet-propelled Aguallo now has 1,029 yards on the year for Mitchell, who was undefeated before the Gothenburg loss.

Reed has really caught fire the past two games, rushing for 555 yards and 11 touchdowns. We all know Reed cannot average 28.6 yards a tote, but the speedy senior is averaging 16.2 yards every single time he rushes the football.

*Carter Sintek-Fremont - 5-11, 155 pound junior quarterback led Fremont to their 5th victory in 6 starts, when he completed 15 of 22 passes for 237 yards and 4 TDs in the Tigers 28-7 win over Lincoln North Star. Sintek started the 2020 season as the backup to Jack Cooper (1,812 yards/16 TDs in 2019), but took over the starting job when Cooper went down with an injury during the 2nd offensive series of the season.

Sintek manages the game as well as anyone around and his 6 game statistics show it. Through those six games, Carter is 77 of 117 passing (66%) for 1,219 yards with 15 TDs with just one interception. Sintek may have to rely more on the aerial game since ace running back Micah Moore has been held to 59 and 84 yards respectively the last two outings.

This 5-1 start is the best by a Fremont team as far back as the eye can see, and with regular season games remaining with Millard South and Millard North, the Tigers have a legitimate shot at entering the playoffs with a 6-2 record. They are currently 10th in the Class A wild card standings.

*Jacob Diessner-Spalding Academy - Senior Dual-Threat Six-Man quarterback made quick work of Elba in last week’s 82-14 win over the Bluejays. Diessner, who accumulated 2,282 Total Yards a year ago, was 6 of 6 passing for 104 yards and 4 touchdowns, rushed 9 times for 156 yards and 3 more scores and made 7 tackles.

Defensively, Jacob has made 280 tackles (178 solos), intercepted 7 passes, recovered 7 fumbles, blocked two field goals, returned a fumble for a touchdown, had a Pick 6 and sang “When Irish Eyes Are Smiling” as he ran down the field on special teams (only fitting for all Spalding Academy laddies and lassies, don’t ‘cha know).

*Hayden Stec, Aiden Young-Elkhorn - Stec ran for 128 yards and scored on an 85 yard run, while RB Aiden Young added 122 rushing yards with a 5 yard TD run in the Antlers 48-6 win over Elkhorn Mt. Michael. Unofficially that gives Aiden Young 669 yards rushing after six games, as his Elkhorn squad holds on to the #3 slot in the Omaha World-Herald Class B ratings as we speak.

*Christian Meneses-Plattsmouth - The Blue Devils tough star ripped his way to 224 yards on 39 carries in Plattsmouth’s heartbreaking 29-26 loss to Norris. Meneses scored on runs of 1 and 2 yards as his Class B, 8th rated Plattsmouth team suffered its first loss of the 2020 season. Meneses now has an unofficial 953 yards rushing entering this week’s game at #6 Waverly.

For the season, Edgar Rodriquez has rushed just 76 times, yet gained 868 yards with 11 touchdowns and that includes a pair of “off” games where Edgar had just 12 and 22 yards respectively. Think of what Rodriquez could do when he’s healthy. Oh, you mean like rusning for 527 yards and 8 TDs the past two Fridays? I get it.

This is a dangerous football team whose only two losses are against C-1, #9 Wayne and 4-2 ratings contender Battle Creek. A good measuring stick comes this Friday when the Cadets visit C-1, #1 Pierce.

*Jack Holsing-Tri-County - 5-10, 165 pound senior back made the most out of a short night toting the pigskin. Holsing touched the ball only 6 times, but scooted for 178 yards and touchdown scampers covering 32, 36 and 48 yards. The quality senior RB has 862 yards thus far this season, and is averaging a robust 11.2 yards a pop for the 6-0 and 4th rated (Eight-Man 1) Trojans.

The Knights are becoming a player in the Class C-2 race, even with that 3-2 record. Hall of Fame coach Jeff Bellar’s team is currently ranked #5 by the OWH with remaining games @BRLD, Crofton and a road trip to Hartington CC.

*Cameron Sattler, Ryan Steinhauser-Stuart - In the Broncos 65-18 win over Santee; RB Cameron Sattler took off for 276 yards on 20 totes and scored four touchdowns on runs of 42, 5, 45 and 50 yards. Cameron also caught 3 passes for 43 yards, one of which was a 12 yard touchdown grab.

Sattler’s junior classmate Ryan Steinhauser, just 5-5 and 120 pounds, completed 9 of 18 passes for 112 yards and three touchdowns. He also rushed for an additional 94 yards on 12 carries, which included a 28 yard TD run. Steinhauser’s other two scoring tosses were gathered in by Austin Duncan and came from 10 and 7 yards away. Simon Addison also hit the board with a pair of 1 and 5 yard runs in the Broncos frolic.

This Stuart team is currently rated #3 in Six-Man football.

For the season: Justin Erb-662 rushing with 10 TDs. Blake Brown-10 of 19 passing with 3 TDs, 870 yards rushing on 67 touches (12.2/carry) with 16 touchdowns. Wakefield is ineligible for the Eight Man football playoffs so every regular season game is a huge one for the Trojans. Laurel-Concord-Coleridge and Hartington-Newcastle are the remaining games on Wakefield’s 2020 slate.