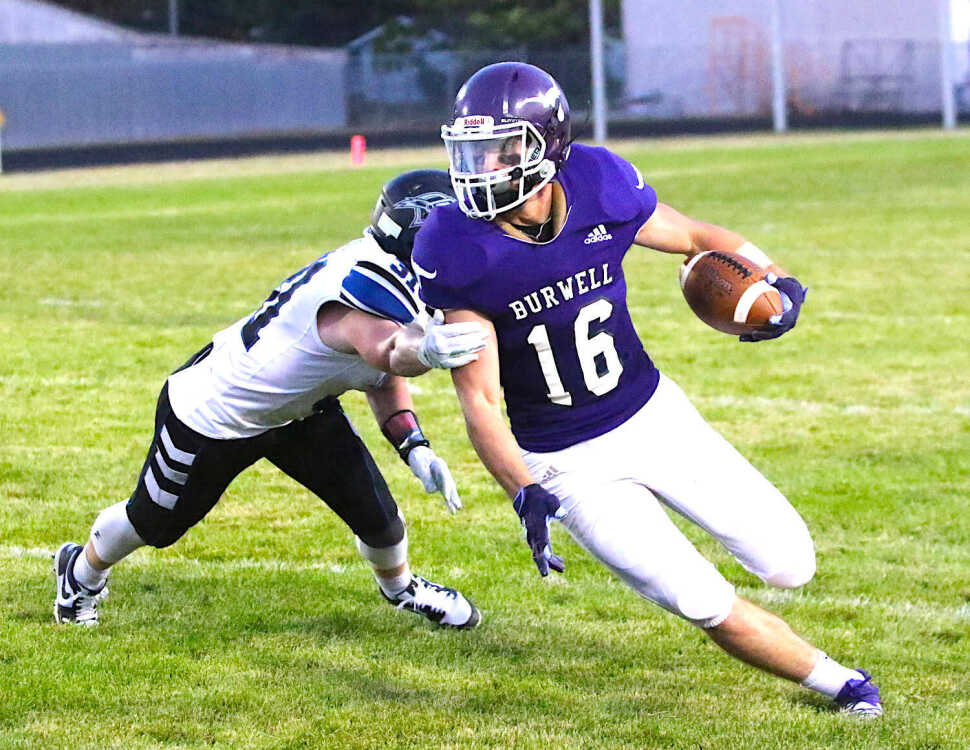 *Caleb Busch-Burwell - Rambled for 313 yards on 33 carries and 6 touchdowns in the Longhorns 70-26 win over North Central. I have Caleb unofficially at 1,090 yards with 22 touchdowns this season. There will definitely be more where these 1,090 came from.

*Reece Bode-Battle Creek - The slender Braves running back will not finish the 2020 football season 21 yards short of the coveted 1000 yard rushing mark like he did a year ago. Not this time around. Despite Bode’s Battle Creek team losing to Wayne 31-12, the outstanding senior RB still rushed for 94 yards on 12 carries, well below Reece’s standards, but a decent night’s work for anyone else.

*Drew Easley, Thunderbolts O-Line, D-Line - Lincoln Pius X - The 6-1,160 pound senior, he of royal bloodlines, snuck out in the open field twice for touchdown catches of 66 and 21 yards in the Thunderbolts 16-13 victory over Lincoln North Star. It was a night to remember for Easley, who caught 5 passes for 119 yards and the pair of critical scoring receptions from quarterback/classmate Colby Chapelle.

Now, Pius is just 2-3 on the season, but when a wide receiver catches a pair of touchdown passes for a team that puts the ball in the air only 22.7% of the time…...it’s a big deal.

Head coach Jim Kearney credits his offensive and defensive lines for making this win possible, and the man is 100% correct. Your offense always has a chance to flourish when you have one of the finest line coaches in the country in Jim Hansen, whom I think is as good they come…...anywhere..

Now, anyone close to this Pius X program knows the familiar last name of EASLEY. Drew Easley is the nephew of Jim Hansen and cousin of Charlie Easley (Pius X and Husker basketball). Will the Thunderbolts ever run out of those Easley bloodlines? As we speak, there are FOUR Easley cousins that are currently involved in sports at Pius.

There is Sam Easley (Charlie’s little Bro), who does basketball and track, Sophie Gallahger and Cora Thomas, who do volleyball, and of course Drew Easley. Oh, those Bloodlines.

*Rylan Aguallo, Kaden Perez-Mitchell - Man, this Aguallo dude is fun to watch. In the Tigers 35-14 win over Chadron, the jet-propelled senior ran for 233 yards on 34 carries with TD runs of 1 and 8 yards. Classmate Kadin Perez also surpassed the century rushing mark with his 121 yards on just 12 totes, which included a sweet 70 scoring sprint.

*Brady Fitzpatrick, Jackson Horn, Trevor Brehm-Papillion LaVista South - Fitzpatrick, the 6-0, 150 pound sophomore quarterback, completed 18 of 30 passes for 288 yards and 3 touchdowns in the Titans 40-24 win over Lincoln Southwest. All three of Fitzpatrick’s scoring tosses were gathered in by Jackson Horn, who caught 8 passes for 139 yards. Horn’s TD receptions were from 4, 23 and 56 yards out.

*Russell Martinez, Crusader Defense-Grand Island Central Catholic - Senior quarterback powered the Crusaders to their third straight win. Martinez rushed for 135 yards on 22 carries and completed 10 of 16 passes for 150 yards in GICC’s 43-7 victory over Gibbon. The Crusader defense was especially impressive, holding Gibbon to 92 yards of total offense for the night. They also held 1000 yard rusher Sean Hampton to 16 yards on 9 carries.

*Kale Bird-Bennington - The 5-10, 165 pound Bennington quarterback accounted for 344 yards of total offense in the Badgers 58-27 win over Blair. Bird, rapidly becoming a top notch Dual-Threat quarterback, completed 11 of 16 passes for 240 yards and 3 TDs, while also rambling for 144 yards rushing on just 11 carries and another three scores.

Bird’s touchdown runs covered 6, 65 and 3 yards. The senior’s scoring tosses were grabbed by Cayden Bluhm (63, 31 yards) and Trey Kerkel (14 yards). Bennington is currently ranked #5 in Class B, sporting a 4-1 record.

*Logan Wiedel, Cameron Schulte-Thayer Central - Senior quarterback Logan Wiedel and sophomore RB Cameron Schulte combined for 441 yards of offense and 8 touchdowns in Thayer Central’s 74-38 route of Exeter/Milligan/Friend. Weidel, the 6-4 senior QB, completed 11 of 19 passes for 273 yards and 5 touchdowns, while Schulte, a 5-10, 185 pounder, rushed for 168 yards on 17 carries and 3 TDs.

Cameron Schulte had to be somewhat of a surprise after running for 12 yards on 4 carries during his last THREE games combined. Hey, that just opened up Thayers offense big time.

Three of Wiedel’s touchdown passes were caught by Andrew Heinrichs and came from 50, 22 and 25 yards out. Grant Wiedel opened the game with a 65 yard TD catch from Logan and

Senior Luke Templin was on the receiving end of the 5th TD toss, covering 14 yards. Cameron Schulte’s touchdowns came on runs of 13, 8 and 12 yards.

Thayer Central is currently 4-1 and being paced by Logan Weidel’s 1,130 passing yards and 21 touchdowns and lest we forget, this young man has been one of Eight-Man football’s most prolific passing quarterbacks the past 3 and a half years, accounting for 4,123 aerial yards and 67 touchdowns.

*Brody Mickey-Columbus - Connected on 7 of 12 passes for 159 yards and 3 touchdowns in the Discovers 42-0 shellacking of Lincoln High. Mickey also ran for 33 yards on 6 carries with a scoring dash of 5 yards. The seniors touchdown passes went to Ernest Hauseman (60 yard bubble screen), Garrett Esch (14 yards) and Trey Kobza (36 yards).

Incidentally, while we you were looking away, Columbus was busy compiling a 4-1 record in Class A, with their only setback a 24-16 loss to Lincoln North Star, a game they maybe should have won. The Discoverers have just two games remaining that will count toward wild card point and they are both road games at Kearney next week and at Bellevue West October 15th.

*Eli Hayes-Clarkson-Leigh - In a 36-30 loss to Guardian Angels CC, the Blond Bomber ran 11 times for 61 yards and 2 scores, caught 5 passes for 104 yards and two TDs, made a monster 9 solo tackles on defense and intercepted a pass. Hayes two rushing scores were on runs of 28, 20 yards and his TD receptions from the arm of Lance Paprocki came from 30 and 12 yards out.

*Mason Walsh, Turner Jussel, Landon Classen-O’Neill - Walsh, the 6-2, 215 pound senior quarterback, completed 19 of 29 passes for 221 yards and a pair of TDs in a 41-33 loss to Broken Bow. Jussel rushed 22 times for 164 yards and a score, while sophomore Lance Classen caught 7 Mason Walsh aerials for 111 yards and a touchdown. Classen also recorded 7 tackles on defense for the Eagles.

*Aiden Kuester-Neligh-Oakdale - In the Warriors 68-14 win over Summerland, the sophomore sensation completed 7 of 11 for 189 yards and 4 TDs, rushed 12 times for 117 yards and score (20 run), made 3 tackles on defense and sailed his only punt of the game 52 yards.

*Trae Hickman-Sandhills-Thedford - Had touchdown runs of 25 and 40 yards, returned a punt 47 yards for a TD and brought a kickoff back 57 yards for a 4th score, in the Knights 55-14 win over South Loup.

*Luke Kasten-Potter-Dix - 6-3, 150 pound Six-Man quarterback was a shining star in the Coyotes 52-32 victory over unbeaten Arthur County. Kasten, just a sophomore, completed 15 of 27 passes for 182 yards and 3 touchdowns, ran for 195 yards on 13 touches and 4 more touchdowns, and made a monster 17 tackles on defense (6 solos/11 assists). Junior Connor Glanz added 14 tackles, which included 10 solo stops, 7 TFL, 5.5 sacks and a recovered fumble.

*Tate Thoene, Myles Thoene, Easton Becker-Hartington Cedar Catholic - Tough QB Tate Thoene completed 10 of 16 passes for 194 yards and 2 touchdowns and rushed 12 times for 97 yards and a pair of TDs covering 40 and 9 yards. Two of Tate Thoene’s TD tosses went to Myles Thoene (30, 58 yds), who caught 4 passes in all for 105 yards in the 50-8 win over BRLD.

*Trey Sucha-Niobrara-Verdigre - Returned kickoffs 69 and 65 yards for a pair of touchdowns in the Cougars 72-28 loss to Creighton.

*Connor Phillips-Sandhills Valley - Connor Phillips, the senior 4-Year starter at quarterback completed 15 of 28 passes for 256 yards and 5 touchdowns in the Mavericks 58-48 loss to powerful Pleasanton. Sophomore Coy Johnson ran for 108 yards on 15 touches. Another sophomore, Cole Kramer had 5 catches for 103 yards and 3 touchdowns (9, 25, 33 yards). Caleb Burnside (12 yards) and Atreju Hill (20 yds) each had one TD reception.