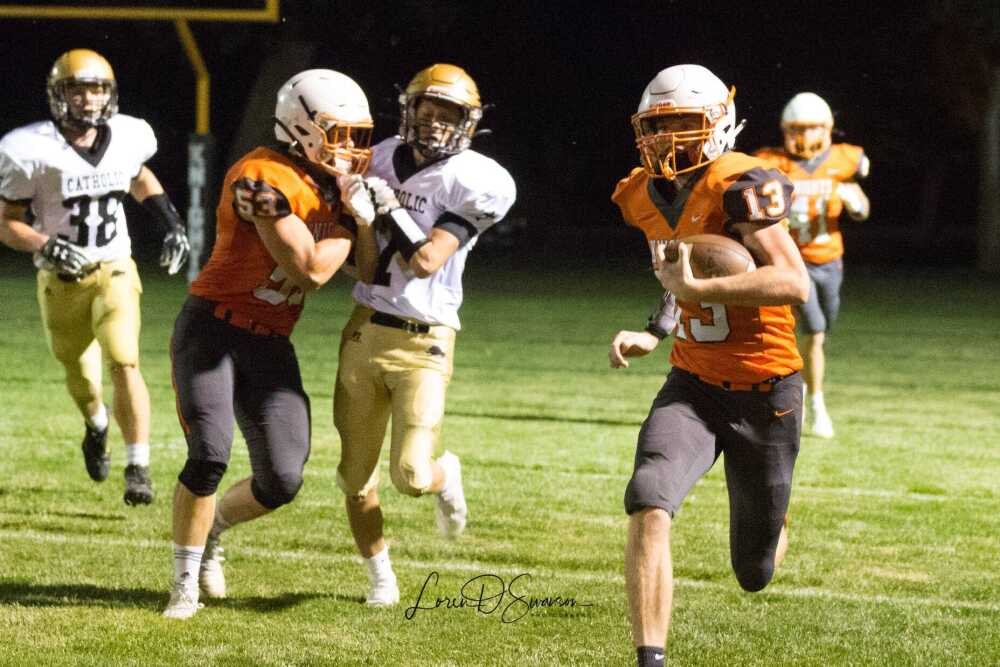 Coulter had already scored a 10 yard touchdown to put the Knights up 8-6 on powerful Aquinas in the opening stanza, when early in the 3rd quarter, with their backs up against the shadow of their own goal posts, Thiele took a pitch on an end around play and sprinted 89 yards for an apparent touchdown. The officials ruled however, that Coulter had stepped out of bounds near the 40 yard line.

Didn’t matter because Thiele, who carries around 4 times a night, averaging 15.3 yards a pop, would literally explode on his final two carries of the game.

The smooth gliding senior ripped off a 79 yard end around touchdown with 3 seconds remaining in the 3rd quarter, then put the game on ice with a 65 yard scoring sprint in the 4th. When the clock read 0:00, Coulter’s numbers read like this: 207 yards rushing on 7 carries with TD runs covering 10, 79 and 65 yards. Just a measly 29.6 yards a carry.

Magnifying Thiele’s feat was the fact Oakland-Craig’s leading rusher, Jaron Meyer (422 yards) had departed the game with an injury during the Knight’s second possession of the evening.

That, Ladies and Gentlemen, just illustrates the fact so many players have stepped up for Joe Anderson’s Knights during their 2019 state Class C-2 championship run and their current 18 game winning streak.

Receiving-3 catches for 43 yards and 1 TD. On defense, Thiele has 7 tackles and an interception.

6-2, 195 pound senior Jackson Alexander caught 9 of Flores passes for 158 yards and a pair of TDs, while senior classmate Trevor Marshall reeled in 7 receptions for 147 yards and two touchdowns as well. Zane Flores other scoring strike was caught by T.J. Silliman.

For the season Zane Flores has connected on 82 of 115 passes (71%) for 1,188 yards and 13 touchdowns. Trevor Marshall is the Dragons leading receiver with 32 catches for 549 yards and 6 scores. His counterpart Jackson Alexander is close behind with 25 receptions for 459 yards and 6 TDs.

This Gretna squad is currently 5-0 (4-0 as far as the NSAA is concerned) and about to face the meat of it’s 2020 schedule. The Dragonsface Class B 4th rated Omaha Skutt this Friday, Class A and4th ranked Elkhorn South in two weeks, then 5th rated Lincoln SE, and finally close out the regular season with a dangerous 2-3 Papillion LV team.

*Carson Sintek-Fremont - When All-State quarterback candidate Jack Cooper went down with a serious injury during Fremont’s second possession of the 2020 season, junior Carson Sintek took the reins, operating the Tiger offense like a seasoned veteran ever since.

For the season, Carson has hit 65.3% of his 95 passes for 982 yards, 11 touchdowns with just one lonely interception. And the 5-11, 155 pound junior’s favorite target? That would be classmate Drew Sellon, who has grabbed 23 of Carson’s passes for 289 yards and a pair of TDs. Three other Tiger receivers have 100 yards or more in receptions, giving Fremont 1,032 aerial yards for the year.

That Fremont football team has a nice balanced offensive attack, having 1000 yard rusher Micah Moore in the Tigers running stable. Moore has already rushed for a whopping 710 yards this season.

*Christian Meneses-Plattsmouth - Junior strongman continued his rushing rampage through the Class B ranks last week when he battered Crete for 240 yards on 16 carries and touchdown runs of 1, 56, 5 and 56 yards in the Blue Devils 38-8 win over the Cardinals.

The 188 pound Meneses, who is averaging 183 yards rushing a game, is at the 916 yard mark with 11 touchdowns in just 5 games for 5-0 Plattsmouth, who enters the World-Herald Class B ratings, coming in at #10 this week.

Korth, who runs from both the halfback and fullback positions, ran for over a thousand yards a year ago for the Blue Devils.

*Jimmy Allen, Zach Weber-Crofton - Jimmy Allen scored three of his 4 touchdowns in the first half, as Crofton was building a 28-0 lead over Tekamah-Herman. Allen, a 1000 yarder in 2019, ended the night with 173 yards on 23 totes and touchdown scampers of 12, 20 11 and 10 yards. Warriors quarterback Zach Weber, who had attempted only 14 passes during Crofton’s first three contests, decided to give the aerial game a whirl and completed 10 of 11 passes for 128 yards, with a 6 yard TD toss to Mayson Ostermeier included in the mix.

Jimmy Allen now has 621 rushing yards in just 4 games this Fall. The senior flyer may have a bunch more come late this Friday night because Crofton will be playing their second game of a “three games in 8 days” stretch when they host Valentine Monday night in a makeup game.

*Brenden Knapp, Eli Larsen, Tommy Wroblewski-St. Paul - Wildcat QB Brenden Knapp was right on target with 5 of his 7 passes in St. Paul’s 70-6 win over Fillmore Central. Knapp ended his night with 156 yards passing and saw 4 of his 5 completions go for touchdowns. Knapp also broke a 65 yard run for a touchdown in the romp.

Knapp found Wyoming commit Tommy Wroblewski for a pair of 1st quarter scoring strikes covering 64 and 24 yards, then hit Eli Larsen with a 33 yard scoring toss in the 2nd period and found Logan Vogal for a 46 yard TD pass in the 3rd.

Eli Larsen extended his regular season streak of 100 yard plus to 12, by rolling for 115 yards on 11 carries, which included a 60 yard scoring dash. Mr. Larsen is edging closer and closer to that 5,000 yard career rushing mark, currently having rushed for a monster 4,489 yards in 37 career games.

St. Paul has remaining regular season games with Wood River-Shelton, Central City, Adams Central and Twin River before the post season begins. Under normal circumstances, one would assume gaining 611 yards in 4 games would be well within reach for an Eli Larsen, but with the COVID thing always lurking, you never know when a game is going to be cancelled.

But, I’m guessing my friend Eli will be a member of the 5,000 Career Rushing Club before this 2020 season is in the books.

*Carson Borzekofski, Doug Rainey, Alex Retherford-Southern - A two yard run by Alex Retherford with 7 seconds left in the rivalry game, lifted Southern to a 42-38 over Diller-Odell. Speedy Doug Rainey was the Offensive Player-of-the Game with his 177 yards on 17 carries and touchdown sprints of 62 and 50 yards. Rainey also caught a 38 yard scoring strike form QB Carson Borzekofski.

Speaking of Borzekofski, the slender 6-1, 165 pound senior, completed 8 of 10 passes for 162 yards and 3 touchdowns, despite sitting out few Southern offensive possessions with an injury. Carson Borzekofski’s other two TD passes went to sophomore Evan Saathoff (55 yards) and Chance Swearigan (26 yards)

On defense, Alex Retherford made 15 tackles, although the Raiders were led by senior Howard Bennett, who had 16. Doug Rainey added 7 stops and recorded a sack while Brozekofski made 6 stops and pirated a Cooper Ebeling pass.

Thus far in 2020, the fleet-footed Doug Rainey has run for 568 yards and 8 TDs, while Carson Borzekofski has completed 49 of 79 passes for 664 yards and 8 scores, plus rushed for another 275 yards and 6 more TDs. Carson also has 2 interceptions on defense and does the Raiders punting.

Coach Kane Hookstra’s Raiders are currently 3-2, with only a 4 point loss to 3-2 Heartland and an 8 point setback to 4-1 Freeman staining their record.

*Brody Eggers, Sam Vortherms-Creighton Bulldogs - In Creighton’s 72-28 shellacking of Niobrara-Verdigre, junior RB Brody Eggers cut loose for 174 yards on just 10 carries, which included 4 touchdown runs covering 30, 22, 79 and 25 yards. QB Sam Vortherms wasn’t far behind with 152 yards rushing on a mere 9 touches, with scoring runs of 12 and 30 yards. The senior quarterback also completed only 3 of 9 passes, but two of those three went to Easton Paulik (55 yards) and Kale Fulton (10 yards) for touchdowns.

*Trevor Wendt-Pleasanton - With All-State Tyce Westland out of the lineup, it was sophomore Trevor Wendt who added a little extra to his game, helping lift Pleasanton to a hard fought 58-48 win over Sandhills Valley (Stapleton/McPherson County). All Wendt did was rush 10 times for 181 yards with scoring runs of 62, 65, 9 and 26 yards. But that wasn’t all for the sensational sophomore, who was a fabulous freshman receiver a year ago for the Bulldogs.

Wendt also intercepted a Connor Phillips pass, returning it 35 yards for a score and also caught a 38 yard touchdown pass from Kray Kingston. Trevor also had 7 tackles on defense, plus that Pick 6.

*Spencer DeNaeyer-Mullen - Junior RB DeNaeyer ran for 172 yards on 13 carries and scored touchdowns on runs of 3, 20 and 71 yards in Mullen’s 58-12 route of Hyannis. DeNaeyer, a thousand yard rusher as sophomore, also recovered a punt in the end zone for a 4th touchdown in the Broncos win.

*Chaz Twarling, Logan DeCoste-Hay Springs - Twarling punished Minatare by ground and Logan DeCoste through the air, as the Hay Springs Hawks bested the Minatare Indians 69-44 in Six-Man action last week. Twarling, a 5-9, 145 pound senior, escaped for 282 yards on 26 carries and four touchdowns, hauled in three DeCoste passes for another 75 yards and a score, and logged 7 tackles on defense, while causing a fumble.

Junior QB Logan DeCoste completed 8 of 10 passes for a whopping 263 yards and three touchdowns, and you know something? When you average 33 yards on every pass completed, something good is bound to happen. Like maybe three touchdowns?

*Jakeem Brown, Caid McCart-Atkinson West Holt - The swivel-hipped, hard juking Jakeem Brown took off for 171 yards on 8 carries and a pair of touchdowns, while teammate Caid McCart was doing much of the same, rolling for 141 yards on 11 tottes with three TDs in the Huskies 62-18 win over Ainsworth.

Brown’s rushing scores came from 67 and 51 yards out. Sandwiched in between the two long scoring runs was a spectacular 55 yard punt return touchdown by the 5-10, 175 pound junior. Brown’s classmate, Caid McCart scored back-to-back opening quarter touchdowns on runs of 10 and 25 yards before tacking on a 52 yard scoring dash before the end of that first stanza.