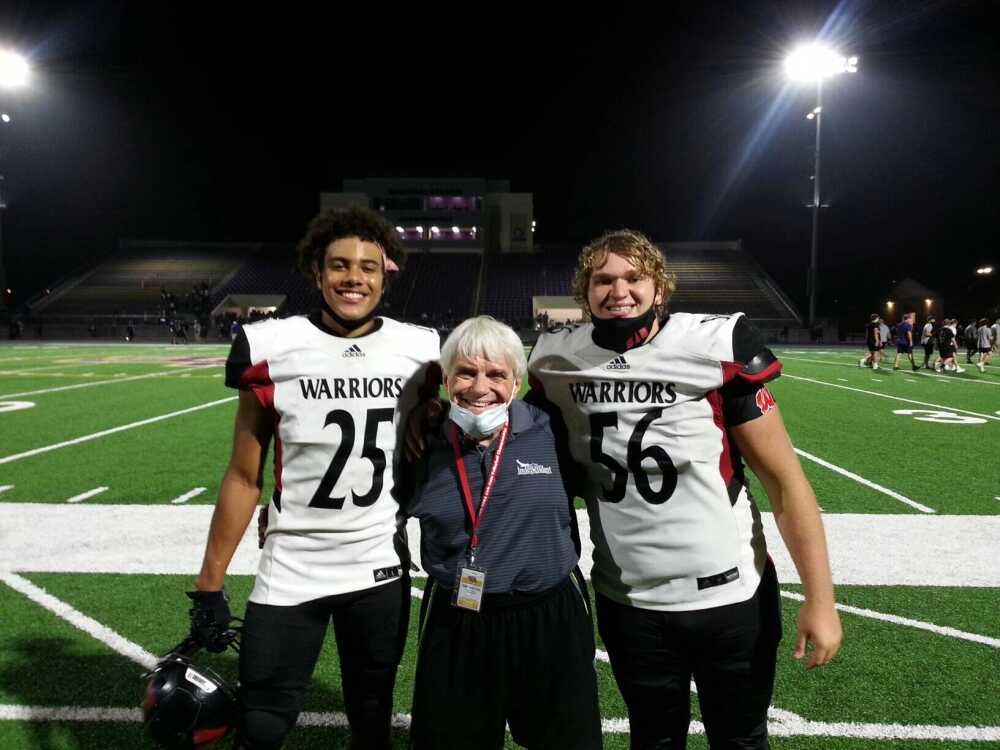 Omaha Westside is the number rated team in Nebraska for a variety of reasons and two of those are Koby Bretz (#25/left) and center Bo Lucas (#65/right).

#1 Omaha Westside executed as close to a perfect opening half of football as I’ve seen in ton of Friday nights. The Warriors of super coach Brent Froendt couldn’t have done it much better offensively or defensively, as Omaha Westside put this game away in the first quarter, eventually racing to a 42-0 win over Grand Island.

The 2020 Westside roster, dotted with a quartet of big time college recruits, were too much for a Grand Island team that played hard, but were simply the victims of playing against an extremely talented football team.

It took the precision, military-like, Omaha Westside offense just 8 plays to drive 60 yards for touchdown on their opening drive of the game. All-State candidate Cole Payton hit two-time All-Stater Avante Dickerson for a 23 yard scoring pass. Cade Hargis added the PAT kick and in a mere two minute, 24 seconds, the Warriors had all the points they would need to win this football game.

If Westside’s opening offensive drive didn’t convince you this team was the Real Deal, the 1st play from scrimmage for Grand Island probably turned the trick.

The Islanders ran a little razzle-dazzle in the backfield on their opening ply before QB Jaden Jurgensmeier fired a pass out into the left flat, directly in front of where I was standing on the Westside sidelines. But Warriors junior Jack Wimmer read the Jurgensmeier throw perfectly, intercepted the pass and returned it to the Islander 8 yard line.

Three plays later, Cole Payton banged across from the one yard line and Grand Island was not only in shock, but in 14-0 hole less than 3 minutes into the game.

After a three and out by Grand Island on the ensuing possession, Cole Payton and the Warriors were again in business at their own 31. This time Cole Payton again mixed in some hard running by Dominic Rezac, who gained 24 yards on the opening drive, some fine running of his own, and some precision passing, to go 69 yards in 7 plays for Westside’s third score of the opening stanza.

This time around, Cole hit junior Grant Guyette, who waltzed in from three yards out to put the Warriors up 21-0 with 4:48 left in the first quarter.

Westside would tack on yet another score before the opening quarter nightmare was over for Grand Island, who played hard as usual, but were back on their heels at this point.

This fourth Omaha Westside touchdown was set up by the great Avante Dickerson, who pirated a Jaden Jurensmeier pass at the GI 34, returning it all the way to the Islander 6 yard line. Two plays later it was Dominic Rezac following the crisp blocking of that Warrior O-Line, for a 3 yard TD run.

With a buck 20 left in quarter number one, the visitors from 8701 Pacific Street in Omaha had themselves a 28-0 lead.

Grand Island actually put together a decent drive to end the first quarter and begin the second. Kytan Fyfe took over the quarterbacking duties, handing off the ball to Jace Chrisman, who gained 11, then gave it to rugged Daylon Keolavone, who gained 8 more yards. Fyfe then connected with Brandon Fox for 9 yards and GI had advanced from their own 19 to their 44 yard line.

But the drive fizzled, forcing another Islander punt and the home team still had not penetrated Omaha Westside territory at that point in time. So went the first half for Jeff Tomlin’s crew,

Rezac reeled off gains of 12, 5, 17, and 10 yards during the drive before crashing in from 7 yards out for his second touchdown of the half, giving Westside a 35-0 lead with 7:13 remaining in the 2nd quarter.

The Warriors would add one more before halftime, this time Cole Payton finding the smooth-as-silk Koby Bretz for a 9 yard scoring strike. The Payton to Bretz scoring connection swelled the Westside lead to 42-0 with 3:33 lead left in the 2nd and that was that for the Warriors first unit offense, except for two more opening half plays that ended with a lost fumble at the Grand Island 46 yard line.

That lost fumble by the way, was about the only negative thing Omaha Westside did the entire first half. And the blocking of that Warrior offensive line was just superb.

The Omaha Westside first offense rested the entire 2nd half, while a mixture of the first unit defense (early) and the Warrior defensive backups, helped preserve the shutout, the Warriors second of the season.

Cole Payton paced the Omaha Westside offense with his 10 of 12 passing for 141 yards and three touchdowns. The senior QB also ran for a pair of scores and 38 yards on 7 totes. Dominic Rezac was the games leading rusher, dashing for 106 yards on 15 carries and a TD.

Islander quarterback Jaden Jurgensmeier completed 11 of 22 passes for 68 yards, but suffered a pair of interceptions. Sophomore QB Cohen Evans (he of good bloodlines) came in to complete 3 of 3 passes for 10 yards. The GI ground game was led by Jace Chrisman, who rushed for 37 yards on 6 attempts and ran very well in my opinion, as did Daylon Keolavone, a solid All-State candidate (at Nose Guard).