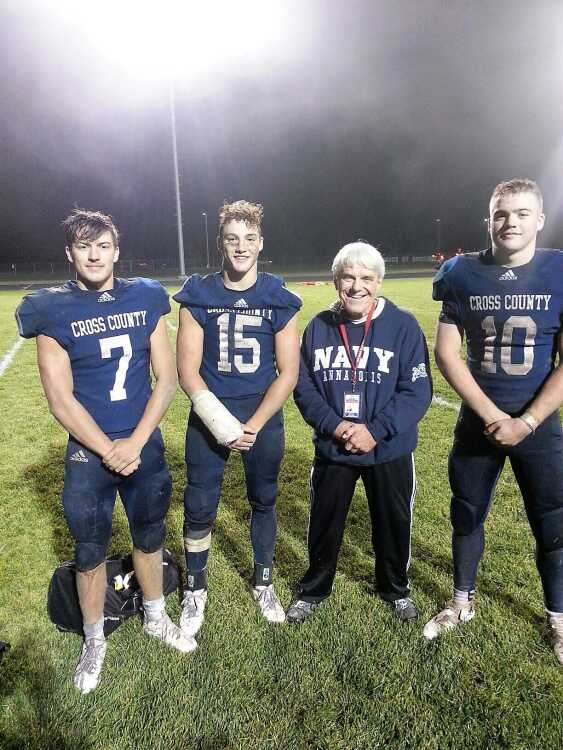 Cross County RB Isaac Noyd (#7/far left) had a career rushing night when he exploded for 338 yards against a good Nebraska Christian team last week. Cross County won the game 52-32, pulling away in the 4th quarter.

*Isaac Noyd, Cougar Offensive Line-Cross County - Senior flyer sliced and diced for 338 yards on 20 carries and 5 touchdowns in Cross County’s 52-32 road victory over a pesky Nebraska Christian team that controlled the pace of the game. There is more to this story though.

The Cougars were without the services of it’s other 1000 yard rusher Carter Seim, who sat out the contest as a precautionary measure, nursing assorted bumps and bruises. Seim will be fine, but the pressure fell on Isaac Noyd and that Cougar O-Line for the simple reason super coach Hayden Delano loves to run the football. My kinda guy.

Check this out. Nebraska Christian ran 82 offensive plays in the game. Cross County ran 35 plays. That means if the Cougars scored 7 touchdowns in the 52-32 win, they had to score every 5th time they touched the ball. And, that put their defense right back on the field in an attempt to stop Nebraska Christian, who is a master at controlling the clock.

So… Noyd’s touchdown runs came from 71 yards in the first quarter. Cougars led 16-8. The senior did not score in the 2nd frame. Game tied at 16 at halftime. Noyd scored from 5 yards out to tie the game at 24. He scored another touchdown from 32 yards away to knot the game at 32-32. Cross County led 38-32 after three quarters.

Then as always, Big Time players do what they do to win Big Time games. Isaac Noyd broke free for paralyzing runs of 70 and 50 yards, putting the game out of reach at 52-32.

Those 338 yards rushing unofficially gives Noyd 968 yards for the season. Incidentally, Cross County’s Shayden Lundstrom threw ONE pass in this football game, which means ALL of Cross County’s 424 total yards were on the ground. All 34 of them (one play may have been missing or there were 34 instead of 35.) That means the Cougars averaged 12.5 yards on every play. You think that Offensive Line wasn’t movin’ ‘em out and creating gaps for Isaac Noyd, Haiden Hild, Christian Rystrom and Zach Haug? Oh yeah.

*L.J. Richardson, Luke Johanssen, Keagan Johnson-Bellevue West - Some new faces this season for Bellevue West, but the same results as 2019. A new quarterback plus a new featured running back was no problem, as the #3 Thunderbirds disposed of #2 Millard South 49-29 last Friday. The new man at the offensive controls, junior Luke Johannsen, completed 21 of 34 passes for 258 yards with 3 touchdown tosses. All-State wide receiver Keagan Johnson had two of the scoring receptions covering 43 and 35 yards, with Micah Riley latching on to the other from 28 yards out.

Huffman also decided to insert Keagan Johnson into the Thunderbird backfield on a few occasions, and the hard Iowa commit must have relished the role, sprinting for 81 yards on 7 direct snap carries which included a sparkling 46 yard TD run.

McDonnell and Roberts each had 4 solo stops, with Roberts recording a sack and an interception in the win. All told, the Bell. West defense made 11 tackles for losses and kept Millard South quarterback TJ Urban on the run most of the night.

This game was especially noteworthy for the Thunderbird starters, who had played only ONE HALF of football up to this Millard South game.

*Hyatt Collins, Patriots Defense-Adams Central - In case you had not noticed, Adams Central’s junior RB Hyatt Collins is on a roll. In the Patriots hard fought 21-13 win over a fine Cozad team, the quick-stepping Collins ripped off a career best 271 yards on 41 grueling carries with 3 touchdowns thrown in there.

That stifling Patriot defense was paced by the great Slade Smith, who posted 14 tackles (3 solos). Blaine Peak added 10 (all assists), while Cam Foster and Jacob Eckhardt both picked off passes in the game. And keep in mind, one of A/C’s best defensive players, Oaklyn Smith, Slades bro, is still out nursing an injury.

*Alec Langan-McCook - 6-2, 220 pound Bison RB broke loose for 209 yards and touchdown runs of 81, 1, 3 and 50 yards in McCook’s 41-13 win over Seward. Langan is faster than you think, especially his quickness in hitting the holes created by that Bison O-Line. And once the Runaway Bison gets rolling, not many wish to meet Mr. Langan head on, as illustrated by his 81 yard touchdown burst on McCook’s very first play from scrimmage.

Lucas Gomez-Wilson provided another long distance treat for super coach Jeff Gross when he caught a pass from QB Lucas Arp and sprinted 67 yards downfield for the score. You may also recall that Lucas’ twin bro, Jacob Gomez-Wilson also provided some long distance excitement when he broke loose for an 88 yard scoring sweep around the Hastings defensive right side late in the game during that 35-8 loss to the Tigers back on August 28th.

The Bison definitely have some weapons in their arsenal and will they make some noise the remainder of the way in Class B this season?

And just when you thought Dundy could only run the football, QB Myers completes 6 of 7 passes for 85 yards and 3 touchdowns against Hitchcock, with his scoring strikes being caught by Lincoln Waters (12 yards), Bobby Schneider (48 yards) and Corbin Horner (6 yards). Serbando Diaz added 117 yards on 15 carries with a pair of scoring runs and led the Tiger defense with a whopping 15 tackles (4 solos, 3 TFL, 1 sack).

*Rashad Madden-Ralston - Sharp cutting, fleet-footed junior broke loose for 231 yards on 23 carries and touchdown sprints of 63, 78 and 18 yards in the Rams home 32-7 home victory over York. The 5-8, 175 pound Barry Sanders-like running back already has 587 yards rushing after just three games for the 2-1 Rams. Remember, Madden ran for 1,128 yards for a Ralston team that went just 1-8 a year ago, with their only triumph coming in a 49-7 win over South Sioux City.

You insert Rashad Madden into an Omaha Skutt, Norris or Waverly backfield, and the dude goes off for 2,000 plus yards.

*Eli Larson-St. Paul - Ho-Hum, just another night at the office for the All-State football star. In the Wildcats 35-6 win over Gothenburg, Eli ripped off 217 yards rushing on 28 carries with scoring runs covering 1 and 70 yards. Larson also made 7 tackles in the game.

On defense, Larson has logged 191 career tackles, made 4 interceptions and recovered 2 fumbles. Special teams wise, the St. Paul product has hit the end zone 3 times on kick returns and 1 time each on a Pick 6, a fumble return and a punt return. That’s in addition to his 4 pass receiving TDs.

All in all, Eli has 75 career touchdowns coming from every conceivable position on a hundred yard football field except for a blocked punt touchdown return. It’s alright my friend, you can skip that one if you wish.

*Tryon Calleroz-Arcadia/Loup City - Senior RB rushed for 171 yards and 4 touchdowns in the Rebels stunning 32-7 win over previously unbeaten Amherst. Arcadia/Loup City, who had their starting backfield together for the first time this season due to injuries and COVID issues, makes this an entirely different football team who WILL be be a force to reckoned with in Eight-Man One football circles from here on out.

Running for huge chunks of yardage is nothing new to Calleroz, who erupted for 313 yards rushing a week ago in a 46-42 loss to Nebraska Christian. And lest we forget, there are bloodlines here. Tryon’s older bro, Tige Calleroz ran for 1,073 (2016) and 1,085 yards (2017) despite fighting injuries.

That Calleroz bunch is one tough crew.

*Dilan Krause, Trevor Winterstein, Storm “D”-Elkhorn South - In Elkhorn South’s 44-0 whitewashing of Lincoln Southwest, 6-2, 190 pound quarterback Dilan Krause hit 8 of 12 passes for 139 yards with a 7 yard scoring strike to Trevor Winterstein. Krause also rushed for 55 yards in the contest. Winterstein, a 5-10, 165 pound senior, not only caught 5 passes for 111 yards and that 7 yard score, but raced to the end zone on a 70 yard punt return.

*Brian Turek-Hemingford - Tell you what, I’ll bet Morrill is mighty glad that Hemingford’s Brian Turek is a senior this year. In Hemingford’s 54-30 win over the Lions, Turek rambled for a gigantic 327 yards on 42 carries and SIX, count ‘em, 6 touchdowns. He also caught a pair of passes, good for 50 yards and 50 yard screen pass score.

Now, a year ago as a junior, Brian Turek rushed for 181 yards and and pair of scores, giving the hard working 5-10, 175 pounder 508 yards rushing and 7 touchdowns in just two years of work against Morrill.

*Cody Wright-North Platte - Senior thousand yard rusher made life rough on Lincoln North Star with his 171 yards on 31 carries in the Bulldogs 35-21 win over the Gators. Thus far in 2020, Wright has rushed for 100+ yards in all three of North Platte’s football games. Although he has just a pair of touchdowns to show for his 451 yards, it’s Wright’s tough running that sets up the Bulldogs opportunities to put points on the board. Cody now has 5 consecutive hundred yard rushing outings and has has broken the century mark in 10 of his last 12 games.

The 5-10, 200 pounder also has 23 tackles and a fumble recovery in three games this fall and I can tell you right now, this young man comes into each and every North Platte football game with an attitude, plus a desire to play the game. Dude is a Baller.

*Trevor Thomson-Summerland - 170 pound sophomore ran for 135 yards on 26 carries and touchdown runs of 1 and 9 yards in the Bobcats 34-22 loss to Atkinson West Holt. Thomson, who has rushed for 507 yards thus far in 2020, also made 7 tackles in that West Holt game and has 32 stops for the season.

The Summerland (Clearwater/Ewing/Orchard) product also has 715 All-Purpose yards in four games. The 1-3 Bobcats incidentally, won their very first football game as the new Co-op when they bested CWC 26-13 back on September 11th, and they can thank Trevor for his 225 rushing yards and 2 TDs in that baby.

I also personally think Summerland has an exceptional head football coach in Jeff Shabram, who was head man at Clearwater-Orchard the past 18 years. The man knows his stuff and his players always buy into his philosophies.

*Bryce Schmidt, Carter Johnson, Cass McGinn-Anselmo-Merna - Junior RB Schmidt and junior QB Johnson had quite the night in the Coyotes 80-20 win over Ainsworth. Bryce Schmidt, who is just 5-8 and 130 pounds, broke loose for 148 yards on 13 touches with touchdown runs of 5 and 6 yards, plus a 10 yard scoring return with a blocked punt. Classmate Carter Johnson wasn’t far off with his 124 yards on 11 carries plus scoring dashes of 55 and 13 yards. Johnson also threw a 22 yard TD pass to junior Garrett Porter.

As far as defense goes, it’s Cass McGinn leading the way with 42 tackles (21 solos), a sack and an interception.

*Aiden Kuester, Julien Hearn-Neligh-Oakdale - Kuester and Hearn teamed up for some big numbers in the Warriors 64-46 win over North Central. Kuester, the sophomore quarterback, completed 21 of his 26 pass attempts for 277 yards and 3 touchdowns. Hearn, a 1000 yard receiver in 2019, grabbed half a dozen Aiden Kuester aerials for 143 yards and scoring receptions covering 22 and 54 yards.

The multi-talented Julien Hearn also ran the football 11 times for 125 yards, which included scoring journeys of 42, 9 yards. Aiden Kuester also got in on the rushing parade with his 90 yards on the ground and three TD runs covering 22, 1 and 6 yards.

The 3-1 Warriors, whose only loss is to rough and tough 2nd rated Burwell, are ranked 7th in Eight-Man One football with scheduled remaining games with 1-3 Summerland, 0-4 Ainsworth, 1-2 West Holt and 3-1 Nebraska Christian.

*Jake Harrison-Franklin - Six-Man junior quarterback led the Flyers to a 60-6 win over Elba last week. Harrison completed 3 of 3 passes for 106 yards with two touchdowns and rushed 6 times for 161 yards, scoring on 5 of his six carries.

Franklin thus far, has beaten Wauneta-Palisade 57-7, Deshler 77-0 and Elba 60-6. BUT, the Flyers find out who they are the next three weeks when they face 2-1 Wilcox-Hildreth, 2-1 (7th rated) Southwest, then 3-0 Red Cloud, who is currently ranked #6 in Nebraska Six-Man football (OWH).