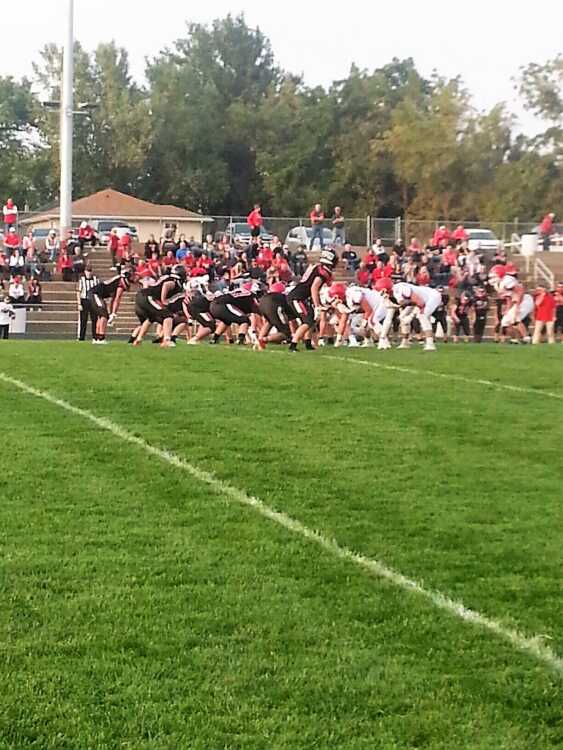 The Hartington Cedar Catholic offense (white/right) lines up to run against David City in a game played Thursday night. The Trojans won the hard-fought contest 21-13 to remain undefeated at 5-0.

Hartington Cedar Catholic head coach Chad Cattau expected a battle on his hands when his Trojans took the field against David City. He was right. The 2-1 Scouts went toe to toe with the unbeaten Trojans for the entire 48 minutes Thursday night before Cedar Catholic’s defense finally stiffened, enabling Cattau’s troops to pull out a hard-earned 21-13 win.

It appeared things might be smooth sailing for 10th rated Cedar Catholic (Class C-2) after the Trojans took their opening drive and marched 63 yards in 10 plays to take a 7-0 lead. Powerful running Easton Becker, a rugged 190 pound junior, took it in from a yard out at the 7:31 mark of the 1st quarter.

That smooth sailing idea vanished on David City’s first possession of the game when Dylan Vodicka, a 6-0, 190 pound quarterback, directed a well-orchestrated 11 play, 4:03 drive that concluded with Vodicka blowing through a nice A-Gap opening, then cutting back against the grain for a 19 yard scoring jaunt.

Senior Jordan Kracl booted the PAT and things were all square at 7 apiece with 3:28 left in the opening stanza. The key play on the drive came when the pinpoint passing Vodicka found Harley Eikmeier for a nice 25 yard completion that carried from the Cedar Catholic 43 yard line to the 19.

The Scouts and Vodicka made it clear it was going to be a football game one play into the 2nd quarter when the fireballing senior QB lofted a perfectly thrown touchdown pass right into the hands of a streaking Jordan Kracl. The play covered 62 yards and gave David City their first (and only) lead of the Thursday Night Lights contest.

Despite some high tackling, the Trojans managed to stiffen their defense, but the hosts continued theirs as well.

But the Cedar Catholic offense once again cranked things up with some tough, crisp, yards-after-contact running by Tate Thoene and Easton Becker. In fact, the Trojans fashioned a nearly picture perfect drive that nearly consumed the final 5 minutes of the first half.

Starting from their own 19, Cedar Catholic leaned on Becker, who ripped off 4 consecutive runs, advancing to the Trojans 33 yard line. Then it was junior QB Tate Thoene and sophomore running back James Christensen combining to move the ball all the way to the David City 11 yard line with 50 seconds left before the halftime break.

On one carry during the drive, the punishing Thoene was met by a pair of David City defenders before simply bowling over both would-be tacklers before continuing on his 9 yard run.

Later in the time gobbling, 16 play drive, the Trojans caught the Scouts off guard twice with pass completions from Tate Thoene to Myles Thoene and Connor Vlach.

Finally, with just 19 seconds showing on the clock until halftime, Easton Becker powered over from one yard line for his 2nd touchdown of the night, giving the Trojans a 14-13 lead going into the intermission break.

It appeared that super coach Chad Cattau and the staff ironed out the high tackling problems during the halftime break because the Trojans came out with some extra fire, putting the clamps on the Scouts rushing game and their passing attack as well.

In fact, David City had the ball for just three plays on their initial possession of the 3rd quarter before senior defensive back Noah Arens pirated a Dylan Vodicka pass at the Trojan 47. Cedar Catholic was not able to capitalize of the turnover, but the Trojan defense, led by Easton Becker (2.5 sacks), Kerby Hochstein, Myles Thoene, Hunter Thoene and Grant Arens, allowed David City less than 30 yards the entire second half.

Scouts quarterback Dylan Vodicka, who had 10 carries for 61 yards at some point early in the 3rd quarter, ended the night with 48 yards rushing on 16 carries. Constant defensive pressure by the Trojans in the second half also limited the Scouts QB to just one pass completion for 19 yards.

BUT, David City remained in the ball game until Easton Becker bolted in for a score from 3 yards out with 6:41 left in the game, making it a 21-13 Trojan lead. On that touchdown drive, by the way, Becker carried the football five straight times, advancing the ball from the David City 33 before blasting in from the three for his third score of the contest.

Cedar Catholic had a chance to put the game away for good with 3:51 left, but a determined David City defense stopped Becker three yards short of a first down on a 4th and 6 at the Scout 29 yard line.

David City took over on downs right there, giving them one final chance. The Scouts made things interesting when Vodicka hooked up with Jordan Kracl for a 19 yard completion that carried from the Scouts 26 to their 45 yard line.

But the Trojan pass rush and secondary defense came to life, forcing a pair of incomplete passes and an intentional grounding call, which forced the Scouts into a 3rd and 35 situation, followed by a quarterback sack to end the contest.

Hartington CC was paced by the powerhouse running of Easton Becker, who ground out 111 hard earned yards on 28 carries and all three Trojan touchdowns. The junior back now has 649 yards rushing after five games. QB Tate Thoene, an equally punishing runner, wasn’t far of Becker’s pace, picking up 90 yards on 17 totes.

Cedar Catholic is scheduled to travel to BRLD next Friday, while David City also hits the road to face tough Fremont Bergan.