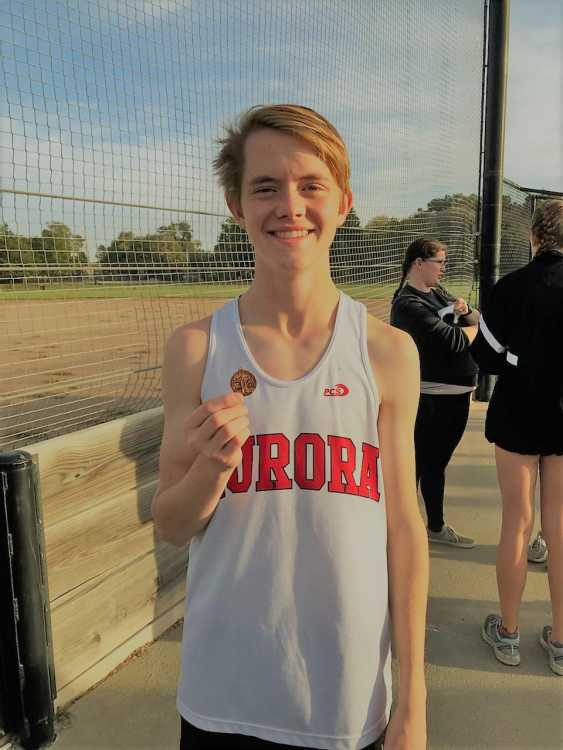 But for now, hit the spotlights for Aurora junior, Max Wirada.

*Max Wirada-Aurora Huskie Cross Country - A year ago, the Aurora sophomore kicked off the 2018 Cross Country season by running a 20:04.4 at the Charlie Thorell Invite in Seward on October 30th. He placed 78th. Just another smallish dude out for the sport to participate?

I applauded the lad for even going out for the sport. After all, he was way ahead of his time as a drummer. Why beat your body up running up and down hills and valleys where virtually nobody sees you? What are spectators supposed to do, run along side of you for the entire 5000 meters? Not gonna happen man, but good for you for “going out”, Max.

In less than a month, Wiarda lowered his time to 18:16 and placed 45th in the brutal Class B ranks at the UNK Invitational, a great measuring stick for State Cross Country, which is held in Kearney

Max ended the 2018 season by placing 54th in Class B last season, running an 18:17.9, a far cry from the 20 minute trip around the Seward course a few months earlier. Max Wirada had grown up as a cross country runner.

Fast forward to the present time. Marvelous Max Wirada, as I call him, ran his usual slower opening time in Seward, but since then has placed no lower than 35th and last week ripped off a 17.31.08 in the Class District Meet, placing 5th overall with a season record for the determined junior.

Now Max Wirada heads to the hilly Kearney Country Club this Friday with his Aurora teammates to compete in the State Cross Country Class C Championships. Marvelous Max’s 17.31.08 is 18th best in Class C. 15th will get you a medal and earn you All-State Cross Country by the Nebraska Coaches Association.

Max Wirada is the measuring stick I use for my drum students. His musicianship and heart when he plays trap set is unmatched, so why would this kid bother with sports? Because that’s the way they do it at Aurora and that’s Max.

And Max Wirada? You bulk him up to 185 pounds, and with the heart he possesses, the dude would be a starter for the Huskie football team. But there will be no such thing happening here. This determined young drummer/cross country runner is ready to complete some unfinished business in Kearney this week.

Marvelous Max quietly told me once he much he liked that Kearney Country Club cross country course. This Friday, we’ll find out just how much and I know one man that just can’t wait to read those results.

*Dalton Borchers, Eric Mustard, Josh Faust-Columbus Scotus - With Scotus star quarterback Tyler Palmer sitting out the game with an injury, backup QB Josh Faust, along with backs Dalton Borchers and Eric Mustard, picked up the slack (and how) to race past a better than you think Logan View/Scribner Snyder team 42-22.

Mustard was about as good as it gets in Hooper last Friday, rushing for 188 yards on 24 carries and 5 touchdowns. Dalton Borchers wasn’t far off Mustard’s pace, sprinting for 182 yards on just 15 tries, part of the Shamrocks huge 431 yards on the ground.

As for Josh Faust, all he did was come in with Scotus trailing by a touchdown and engineer three consecutive scoring drives. He also hit six of eight passes in the game for 43 yards.

*Brody Nelson-Beatrice - 6-1, 175 pound junior took off for 148 yards on 16 carries and a pair of scores in the Orangemen’s wild and crazy 64-56 loss to Hastings. Those 148 big ones lift Brody Nelson over the 1000 yard rushing plateau, giving the hard running Beatrice back 1,030 yards with 7 TDs with one regular season game left versus Seward.

A thousand yards rushing for a 3-5 Class B team is pretty special in my humble opinion, and considering the fact the Orangemen didn’t win a single game a year ago and Nelson was the leading rusher with 358 yards, there’s no doubt this is huge.

It is a real thrill to watch these young guys wait for their shot at being the featured running back for their respective football teams in Class A. In Nick’s case, he was caught behind Chandler Cotton (1,243 yards) a year ago, rushing for 197 yards and a couple of scores on 31 carries.

But, give players like Nick Sich one entire off-season of hard work and they are often times ready to assume the role of 1000 yard rusher.

DJ also rushed for 113 yards on just five touches, making it to the end zone on runs of 51 and 16 yards. This marked the 2nd straight week the junior signal caller hit the 100 yard rushing mark.

*Trevin Luben - Wahoo - Senior All-State RB ran 12 times for 155 yards and 5 touchdowns in the Warriors 69-14 win over Columbus Lakeview. Luben, who has run for 1,239 yards and 24 TDs this season, hit the end zone on runs of 46 and 3 yards in the opening quarter, scored form 7 and 36 yards out in the 2nd, then closed out his work for the evening by crashing in from 3 yards out with 6:59 remaining in the 3rd stanza.

Grant Kolterman added touchdowns with a 7 yard rush and a 71 yard pass reception from QB Thomas Waido. Colin Ludvik also ran for a pair of second half touchdowns covering 15 and 45 yards to close out the Wahoo scoring.

Kole Bordovsky was in on 10 stops for the Warrior defense while Cooper Hancock snared an interception. Roland Sotelo and Kyan Lausterer each recovered a Lakeview fumble during the game.

Wahoo, rated #1 in Class C-1, can clinch the District 4 championship with a victory over Columbus Scotus on Friday. The 8-0 Warriors are currently tied for 2nd with Pierce in the lastest C-1 wild card rankings. Adams Central (45.8750) is the team ranked above both Wahoo (44.7500) and Pierce (44.7500) in those WC standings.

*Cody Wright-North Platte - Bulldog junior uncorked his top rushing performance of 2019 when he galloped for 164 yards on 19 touches and 3 touchdowns in North Platte’s easy 54-0 win over Omaha Benson.

Sandhills-Thedford gashed the Eagles for 451 yards on the ground, accumulated by six different ball carriers. Two other sophomore runners, Dane Pokorny and Reece Zutavern each had 11 carries in the game and rushed for 97 and 81 yards respectively.

Dane Pokorny, who had missed the front portion of the 2019 season with an injury, makes this Knights team even more dangerous entering the post season.

Trae Hickman, who ran for 451 yards and six touchdowns as a freshman in 2018, has 925 yards and 18 TDs entering the Knights regular season finale @ 3-4 Medicine Valley Thursday night.

The Knights are currently ranked #6 in Class D-2, having outscored their opponents 412 to 161 for the season.

Jasiya DeOllos was a menace to Alliance all night on the defensive side of the football with 5 tackles and several disruptive plays. DeOllos also shocked the Bulldogs with an electrifying 94 yard kick return.

Caleb Walker converted 6 of 7 PAT attempts and connected on a 43 yard field goal in the contest.

*Eli Larson-St. Paul - St. Paul super back did his normal thing in the Wildcats 57-7 win over a good Centura team. Larson, just a junior and already a two time thousand yard rusher, carried only 11 times against Centura, but exploded for 196 yards and four touchdowns. Most of Eli Larson’s damage to the Centurions defense was done in the first half as the Wildcats built a huge lead.

When you consider that the 6-0, 210 pound speed demon is not even averaging 20 carries a contest, yet still leads all of 11-Man football in rushing, you know what a special football player Eli Larson is and has been for 2 seasons running.

Van Housen bolted for 185 yards on 25 carries and two TDs, while backfield buddy Dylan Soule added 140 more on 17 touches with a pair of scores. Those combined 325 yards rushing were part of a 438 yards on the ground for the StormDogs.

Chesney Stanczyk, just a junior, added 131 rushing yards on 32 totes with TD runs of 1, 3, 6, and 3 yards. Stanczyk’s season rushing total now swells to 1,323 yards (19 TDs). Austin Dormann is next with 1,095 yards on 152 carries with a whopping 27 touchdowns. This dude is dangerous, averaging a touchdown every five and half times he lays his hands on a football.

Garden County, rated 4th in Eight Man 2, has completed their season, finishing a perfect 8-0. The Eagles are currently ranked #5 overall in the wild card ratings, but as you know, both Eight Man One and Two qualify thirty two teams for the post season and are split into East and West brackets.

The two winners meet in Lincoln for the title in their respective classes, so Garden County’s overall #5 wild card could turn into a higher seed once the brackets are split.

…...next up, Part Three of Friday Night Lights Football Heroes