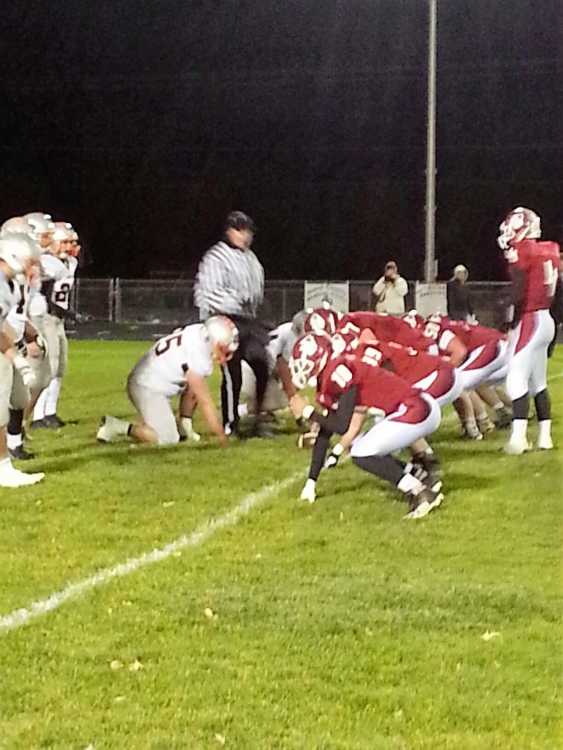 *Casey Doernemann-West Point Guardian Angels CC (OG/DE/DT) 6-5, 250, Senior - Certainly didn’t take me long to put this guy in the O-Line on my D-1 All-State team a year ago. You’ve heard that old cheer “push ‘em back, push ‘em back, waaayyyy back!” That describes Casey Doernemann’s O-Line blocking. Not many get around him to even sniff a tackle and the fear he instills in defenders is something real. It’s a matter of survival for a much smaller player, honestly, in their head anyway.

On defense a year ago, Big D amassed, are you sitting down for this? 88 tackles and 10 TFL. This is a lineman we’re talking about here. It’s a matter of being nearly impossible to block the guy. Another favorite pastime of Doernemann is rising up out of his 3-point stance of defense, sticking those long arms in the air and either batting away QB passes or intercepting them.

Remember, Casey started as a Freshman and if I recall correctly, made the All-District team that year and the next two. 6 feet 5 inches all and a decent vertical will help with that little task every time.

And…….Casey Doernemann can and will play at the next level if he chooses to do so.

*Max Zeleny-Exeter-Milligan/Friend (TE/LB), 6-0, 200, Senior - Ditto on giving Max a mention here and a well deserved offensive one at that. They breed ‘em tough down there in Dean Filipi land and Zelany is just another to come down the pipeline. As a tight end, No. 85 was targeted 27 times and Marvelous Max caught 24 of those for a fat 413 yards (17 per catch) and half a dozen TDs.

Considering the fact Zeleny had 118 tackles from his LB slot, it’s a shame the field was to crowded to squeeze him out of an All-State pick. Won’t happen this season.

You will see Max in my salute to Eight Man football’s Premier Linebackers article.

*CJ Pickrel-Fullerton (OG/DE*), 5-9, 230, Senior - If Pickrel isn’t the fastest Eight Man lineman in the state, he has to be close. Dude benches 315, squats 495 and still runs a 4.9 forty, and that 40 time is legit, folks. Last season CJ had a Pick-6, and a pair of returned fumbles for scores and was pulling away from defenders at the end of the TD runs. The man was All-District in 2018 and made the Grand Island Independent All-Heartland team as well.

Pickrel’s Dad, Kurt Pickrel, was an outstanding athlete for the Warriors in his day and is still a big son-of-a-gun who looks like he could hold his own with CJ in a wrestling match. The All-State pool was so loaded in Class D-1 a year ago, that CJ was squeezed out, but this year may be a different story.

Highly intelligent football player we have here. Always knows where the ball is and owns a jet propelled first step, especially on defense. His uniform number 99 gives the appearance that Pickrel is taller, but the dude just plays like a 6-2 guy. Expect even bigger things out of Mr Pickrel in 2019 and with a great coach like Ryan Haughton directing things, it’s that much better.

*Carter Throener-Howells-Dodge, 5-11, 220, Senior - Man, did this young man ever catch fire the second half of the 2018 season. Wow! Throener made 26 tackles through Howells-Dodge first four games, then exploded for 51 the last five games of the season, including a trio of double digit stops outings. 75 tackles, 6 tackles for losses and 4 sacks isn’t exactly standing around watching the game go by.

I haven’t spoken with Mike Spiers about Carter Throener, but I’m hearing he may be switched from the interior defensive line to a linebacker position for the upcoming season. Considering the monster All-State players Howells and Howells-Dodge have produced at linebacker over the years tells me that Throener must be one heck of a sideline to sideline player to man any LB slot for Coach Spiers. We’ll sit back and watch that situation develop and it should be fun.

As far as Carter on offense? He was part of an offensive line that cut loose Dylan Horejsi for 1,630 yards and 25 TDs a year ago. No further explanation necessary. Solid All-State candidate 2019, especially on defense.

*Colby Heller-Wisner-Pilger (TE/DE), 6-3, 180, Senior - Heller was one of the reasons Wisner-Pilger football made a resurgence in 2018. The Gators finished 7-3 and not only made the playoffs, but won a post season game before falling to eventual state D-1 champion Creighton.

Tell you what, Colby Heller raised you know what from his defensive end position the entire 2018 season. The 180 DE made an impressive 69 tackles in 9 games (he must have missed one), but what really knocks me out is his 19 tackles for losses. Heller went unblocked at times and maybe they thought he was going to drop back in pass coverage, but it didn’t matter if he was met by one or two would-be blockers, he still managed to drop the ball carrier behind the line a bunch of times.

Offensively, he was a very good run blocker and managed to slip away to catch 9 passes for 169 yards and two TDs, including a sweet 38 yarder against East Butler.

Colby should post even higher numbers in 2019 with Wisner-Pilger returning 7 starters on both sides of the ball. Let’s keep out eye on Heller and this W-P squad this go around.

*Damon Honeysuckle-Nebraska City Lourdes, 6-1, 205, Senior - Dude plays with fire and comes to the game with an attitude. Awful strong 205 pounder that plays with fury on both sides of the ball.

On offense, Honeysuckle may be the best hand fighter as a blocker on offense I’ve seen in 8-Man football for a while. The man has apparently worked on his technique long and hard enough to avoid holding calls. Slick as a whistle and effective to boot in that department.

On defense, frankly the guy can either strike fear into a player or trigger a little extracurricular activity with his aggressive syle of play. Damon made 53 tackles in 2018, but was just so disruptive on every play. The dude was everywhere.

Here’s what I think about Damon Honeysuckle. If this guy plays like he did against Sacred Heart a year ago, you’re talking another certain All-District offensive line pick, and some All-State consideration for sure. By the way, don’t make this guy angry during under the Friday Night Lights. Not a good idea.

*Tyler Marlatt-Elmwood-Murdock (OL/DL), 6-4, 250, Senior - That’s a tough bunch down there at Elmwood-Murdock, simple as that. Tyler Marlatt is an extension of that toughness and it shows when the guy just dearly loves to play on the suicide teams and blow people up, then make the tackle.

On offense, Marlatt helped clear he way for tough-as-nails RB Drake Spohr, who rushed for 1,126 yards a year ago. Tyler is a man who sticks with his blocks and plays through the whistle. On defense, the 250 pound terror registered 70 tackles with 6 TFL and dozens of Excedrin headaches.

I understand Tyler suffered a torn ACL injury in that playoff loss to Lutheran High NE but is fully recovered and ready for some action in ‘19. Monster talent here. Does not miss tackles.

*Jon Ortner-Ainsworth (FB/DE), 6-1, 185, Senior - Talk about having a license to steal from your defensive end position, Jon Ortner has just that, and he earned every bit of it with his talent and flair for the game. Check this out.

Ortner had 61 tackles in just 7 games last season for the Bulldogs. Twenty nine of those were solo stops and 22 of those 29 were tackles for losses. In eight man football, if you have the speed to get around that offensive end or tackle, you have a straight shot, untouched, at the quarterback or the running back that just took the handoff. There is your license to steal, folks.

On offense, Ortner lines up at fullback and runs in a pass oriented offense. Great blocker and hard nosed runner when he gets the opportunity. I had looked forward to watching this kid in a 1st round playoff game at Nebraska Christian, but Ortner must have been injured a few weeks prior in the North Central game.

Ortner is just one of those pure football players you notice during the first few plays of a game.

*Brandon Beeson-Tri-County (OL/DE), 6-2, 195, Junior - I noticed Beeson had 77 tackles as a defensive end. The other three things I noticed about his 2018 season……he was only a sophomore, was playing in the defensive line at 6-1, 195 pounds, played for a 2-6 football team. Pretty impressive.

I may recall Brandon Beeson playing 7th grade football for York, but don’t quote me on that one, nevertheless the kid has a real nose for the football. He just sheds blockers like they were 90 pounders and somehow gets in that opponents backfield.

Just looks like the young man loves the game of football and that is huge. Many really like playing the game, but when you love strapping on the pads, you are going to be special. That’s Brandon Beeson.