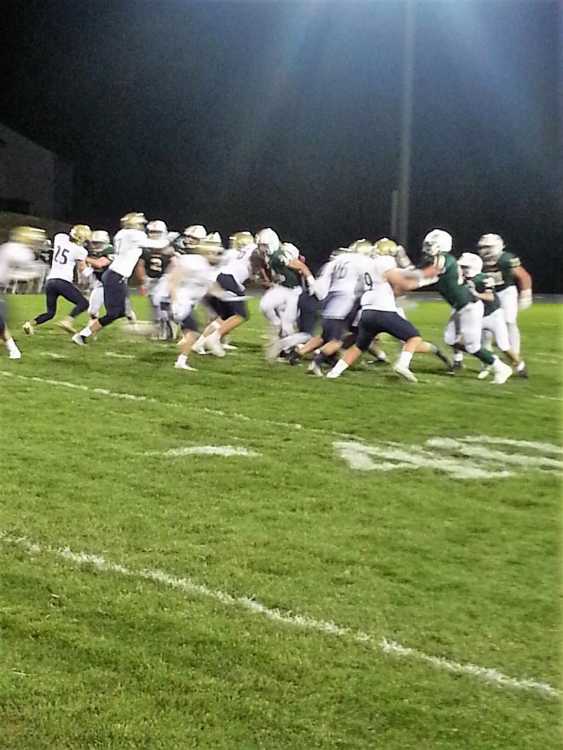 *Jacob Ludwig-Ashland-Greenwood (OG/DE), 6-1, 215, Senior - Jacob Ludwig is the absolute best defender in Class C-1 I’ve seen to this point. Honest to pete, the dude looks like he’s being allowed to get through the opposing offensive line as if it were a screen pass. The guy is just that quick. It’s almost funny to watch, but not so much to the other team.

Check out these vitals; 4.64 forty, 34.5 vertical, 320 lb. bench, 455 squat. That doesn’t too sweet to a QB bearing down on you when you can visualize what is coming even if you get rid of the football.

Mr. Ludwig is hereby on my 2019 All-State list until further notice. Unreal performer who loves the game and plays on fire from 12:00 till 0:00.

*Ryan Marlatt-Aurora (OL/DL), 6-3, 285, Senior - Returning All-State Offensive lineman who is being mentioned as one of the best ever at the school. Good lord! Equally adept in the run or pass blocking game, Marlatt is an immovable force on offense, loves the pancake block and can tear you up on defense. We address him as Mister Marlatt.

*Dylan Svoboda-Pierce (OL), 5-10, 210, Senior - May be the Three Horsemen’s best buddy in that Bluejay offensive line. It certainly team effort in that O-Line to produce three 1000 yard rushers, but Svoboda seems to be the ring leader. I’m impressed because I’ve seen him in action on the field. He and Kage Heisinger combine to make a scary duo in that Pierce O-Line.

*Jesus Loya-Ord (DL), 6-5, 285, Senior - You think Loya isn’t a specimen? How about a 28” vertical for a guy that weighs 285 big ones? He will be a huge factor in stopping the run this season. Also makes life miserable for opposing QBs with his frequent backfield visits. Fights off blockers as well and anyone in C-1. All-State candidate for sure.

*Gunnar Vanek-Wahoo (OL/Center/DE), 6-3, 245, Senior - Ask 2000 yard rusher Trev Luben how valuable Gunnar Vanek was in 2018. He will be the 2019 leader in that Warrior offensive line. As a defensive end, Vanek made 33 stops even though guys like Sam Kolterman and Kole Bordovsky were doing major damage. Another All-State candidate who will shine on both sides of the ball in about 16 days.

*Nate Boerkircher--Aurora 6-6, 220, Senior - Missed part of 2018 due to injuries. Played in 8 games max and really came though for the Huskies when it counted during their playoff run. Boerkircher is probably better offensively (2 TD catches in the State Final game against Ord), but certainly is no slouch on defense.

Keep this dude healthy in 2019 and not only will Aurora be a much better team, but coaches at the next level will be looking with that 6-6, 220 pound frame causing them to lick their chops. An injury free 2019 season could make Nate Boerkircher a bonafide All-State candidate.

*Carson Stauffer-Milford, 6-0, 220, Senior - 65 tackles, 12 sacks from his defensive end slot in 2018. Quick feet and relentless when pursuing the quarterback. Also an All-District offensive lineman for Marty Hingst in Milford. You can tell this dude is a dedicated weight room guy.

*Brandon Swahn-Wahoo (OL), 6-1, 200, Senior - Wahoo had so many studs on defense a year ago, Swahn went unblocked at times. Won’t be the case this year, but he will still get his tackles. A whole slew of them. Kid as a stride like a 400 meter man, plus speed and endurance galore on defense. Uses that same quickness on offense to pull on sweeps and take out would-be tacklers for Trev Luben. Brandon Swahn will be a marked man in 2019 for opposing teams blocking schemes.

*Tucker Wyatt-Gothenburg (OG/NG) 6-0, 235, Senior - Love this type of football player. Nothing on Tucker Wyatt’s Vitals page knocks you out. The guy just simply gets it done on both sides of the ball with pure heart and drive. O-Line leader the past two seasons and on a defense where Owen Geiken grabs all the headlines, Mr. Wyatt also gets it done with great regularity and efficiency every single game. Straight A student in the classroom as well.

*Brandon Hopson-O’Neill (OG/DE), 5-11, 205, Senior - Wow, another undersized defensive end that plays like a 230 pounder. Averaged 7 tackles/game (63 total), had 9 TFL and recorded sacks. Pretty sure Central City’s All-State QB candidate would like to forget Mr. Hopson, who had 3 sacks and 13 tackles against the Bison despite losing 48-13. O’Neill went 0-9 in 2018, but this dude still played his heart out. That’s Brock Eichelberger football, man.

*Kage Heisinger-Pierce (OT/DT) 6-2, 275, Senior - Noticed this strong man in the Pierce/Lakeview game. It was like a heavyweight wrestling match all by itself when he was blocking. Dude just never quits on the play. Always looking for somebody else to smash. Very solid All-State candidate and that may be a huge understatement.

*Carter Rohrich-Pierce (OL/DL) 6-1, 195, Senior - Talk about a man that plays like he’s 30 pounds heavier. 64 tackles last year with 5 sacks and by far the returning leader in that tackling department for the Bluejays. So much talent in those offensive and defensive lines for Coach Brahmer.

*Jaxon Lunsford-Falls City (OT/DT), 5-10, 230, Junior - Started as a Freshman, made All-District last season as a sophomore, and keeps on getting better and stronger. Always a big kid among the smaller dudes. Lots of potential here.

*Eric Lenz-Central City (OG/DE), 6-2, 195, Junior - Bob Jensen said this kid has tremendous potential and looks to me like he could grow a bunch. Out of his 28 tackles from his DE slot a year ago, 19 were solos and 5 were behind the line of scrimmage, and remember he was playing defensive end at 180 pounds.