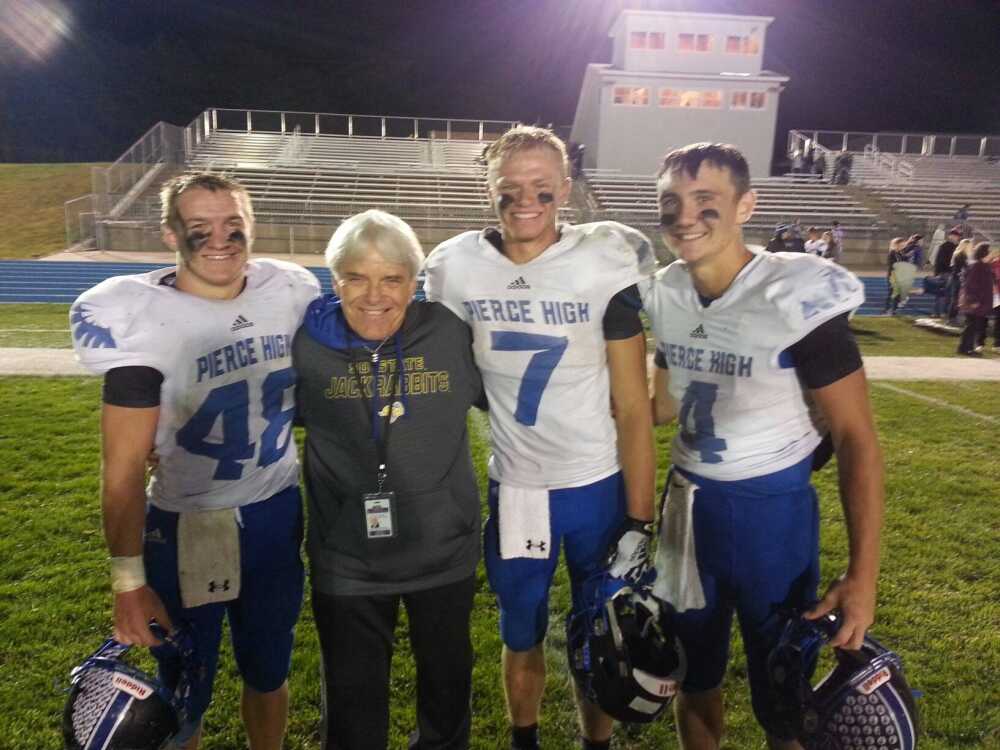 The 2005 Millard North team rushed their way to a Class A state championship with a spotless 13-0 record, led by All-American quarterback Jeff Tarpinian (2,072 yards), RB Corey Young (1,678 yards), and FB Paul Homer (1,200 yards). That magical backfield, with their Freddy Petito flawless quarterback option offense run to near perfection, amassed 5,968 yards rushing, while only averaging 38 yards a game through the air.

How does the 2018 Pierce Three Horsemen team measure up to that legendary Millard North team? Playing two less games, the Bluejays rushed for 4,675 yards, but averaged nearly 70 yards/game passing.

So, in terms of total yards per game, Millard North averaged 489.9 per outing in 2005, and Pierce 493.6 a year ago, but that was then and this is now and unlike Millard North, “The Three Horsemen” have another shot at making history in 2019.

*Carson Oestreich-Pierce - 6-0, 185, Senior (1,220 yards) - The official “Renaissance Man” of the Pierce high school football team. A Houdini of sorts, Oestreich plays the “now you see me, now you don’t” game on offense, lining up at every conceivable point in that Pierce offensive set. Set? Sets is a more suitable description. Many, many, many offensive sets.

One of the many great assets about Oestreich is the fact he can flat out fly when he gets the football. I caught Carson live on the right night at Columbus Lakeview when Pierce posted a 44-22 win over a very good Vikings squad.

The lanky junior not only picked off a pass and returned it 80 yards for a touchdown, but Oestreich also took a pitch on a sweep right, suddenly pulled up and lofted a 75 yard scoring pass to an all-by-his-lonesome Gavin Larson, his junior classmate.

It was indeed a “Renaissance Man” type evening for Carson Oestreich that game. One for two passing with that 75 yard TD toss, 16 carries for 143 yards and score, and 3 pass receptions on offense. On defense, the 80 yard Pick 6, and 3 tackles. On special teams, Carson returned a kick-off for 22 yards and brought a pair of punt returns back for 23 yards and I’m told he made sandwiches for the entire team on the way back to Pierce. Well, the last was maybe just hearsay.

This young man is also a better defensive player than you think. Oestreich had 39 tackles a year ago, not in the Brett Tinker category, but like Tinker, was a huge force on the defensive side as a sophomore, recording 62 stops. And to illustrate how adept this lad is on that Pierce defensive side, Oestreich was in on 48 tackles as a freshman (149 for his career).

*Dalton Freeman-Pierce - 6-0, 170, Senior (1,163) - Otherwise known as Dalton “Der Fuhrer” Freeman in Pierce football circles. Not the Renaissance Man Carson Oestreich may be, but pretty dang close. This is the man that directs things when the Bluejays have the football. We know his role as the Quarterback, and he’s one of the best in the biz.

Last season, “Der Fuhrer” Freeman threw the ball only 68 times, but completed 40 of those (59%) for 9 touchdowns. Dalton also ran for 1,163 yards and 18 TDs, but the lethal thing about Freeman’s running is the fact he averaged nearly 10 yards every time he touched the pigskin and honestly, the defenses never knew if he was going to run the ball, pitch it, hand it off up the gut to Tinker, or pull up and heave a pass downfield.

Like Carson Oestreich, Dalton has sprinter’s speed, especially that deadly, long striding 400 meter type speed. And possibly the most phenomenal thing I saw with Dalton Freeman last year was his mastery of one of the most complex high school offenses I have ever seen. To make things more difficult yet, Coach Mark Brehmer barks out two, sometimes three code names for every play he wans to run and Freeman has to decipher the code and know which is the Real McCoy and which is the “dummy” signal(s). Incredible. The kid is that bright.

Just like Tinker and Oestreich, “Der Fuhrer” Freeman could be an All-State choice on defense. Last season, Dalton made 21 solo tackles, was in on 26 assists (47 total), had 3 tackles for losses and picked off five enemy passes. And, just like the other two members of Pierce’s Three Horsemen, Freeman was a mainstay on defense his sophomore year, making 65 tackles and recording a pair of INTs.

You know, when you think about it, Dalton Freeman’s sophomore offensive numbers were pretty impressive too. 693 passing yards and 5 TDs, 831 yards rushing and 11 scores, plus 2 pass receptions…...both for touchdowns.

And remember this about that Pierce 2017 season. The Bluejays were just a few points away from a meeting with Norfolk Catholic in the Class C-1 finals in Lincoln.

I say this for 2019. Lead this Pierce Bluejay team to the promised land, Dalton “Der Fuhrer” Freeman and save me a spot on the sidelines if you would, please.

*Brett Tinker-Pierce - 5-8, 180, Senior (1,045 yards) - All-State linebacker that has about as much high energy passion for the game of high school football as you’ll find. Tinker has amassed 249 tackles the past two seasons for Coach Mark Brahmer’s Bluejays and has a nose for the football like a Neodymium magnet does for metal objects. (you may have to look that one up)

Brett Tinker is built like a miniature locomotive and packs quite a wallop at the point of impact as a ball carrier, or a ball carrier destroyer. Remarkable lower body strength and foot speed that enables him to not only turn the corner, but to break the long run. Ask Norfolk Catholic about that one a year ago.

Tinker is listed as a fullback on the Pierce roster, but if you know Coach Brehmer very well, Brett may lineup anywhere in one of the Bluejays multiple offensive sets. He’s not quite the utility man as Carson Oestreich, but every opposing defense knows they must absolutely know the whereabouts of No. 48 at all times.

Putting it simply, every coach in the state would be tickled pink to have half a dozen Brett Tinkers in their arsenal. And yes, Tinker consumes a dozen 10 penny nails for breakfast everyday. What an outstanding football talent.