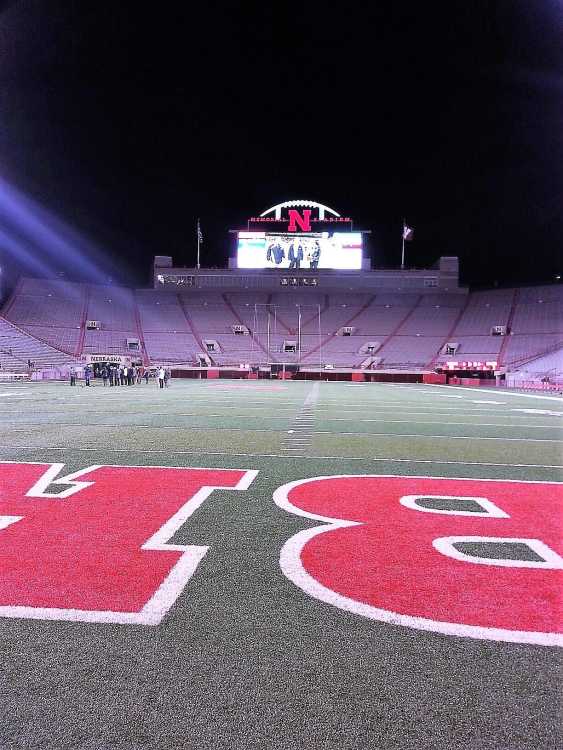 Great cross section of talent when you combine this trio’s gridiron abilities. It may be difficult to find a tougher triumvirate than this in any 11-Man class in Nebraska high school football.

Wahoo enjoyed great success a year ago, advancing all the way to the C-1 semifinals before losing to mighty Aurora 35-10. And that 35-10 margin was the closest anyone came to the Huskies in 2018.

Luben, who has 4.6 forty speed, just loves to cut back against the grain and there is a reason for that. He is a wizard at reading his blocks and knowing precisely when to make his cuts and those babies are quick and razor sharp .

Trev also not only possesses superior lower body strength, but really has more upper torso strength than his bench press indicates. Luben also knows how to use his straight arm and maintains terrific balance after absorbing a hit and those yards after contact? Holy Headache Batman.

Only minor concern to me would be the fact Trev Luben lost a pair of hard nosed, All-State blockers in lineman Sam Kolterman and Jack Sutton, but the Warriors have been a Class C-1 playoff mainstay, having missed post season only twice since 2004, so Coach Chad Fox and the men know how to reload every year.

So, that would indicate to me that Wahoo can most likely fill in those O-Line slots vacated by Kolterman and Sutton, opening the door for another banner season for Wahoo’s #11, Trev Luben, who is the leading returning rusher in the state, regardless of class.

*Gabe Conant-Adams Central - 5-10, 170, Senior (1,283 yards) - Two time 1000 yard rusher for the Patriots who is also a dangerous receiver out of the backfield. I’ll make no bones about it, I like Gabe Conant a lot, his football team as well, and especially the Adams Central coaching staff. They do things right. Now with that out of the way, here is an eye catching stat about Conant and stay with me on this one.

This A/C offense has been operated by the same young man for the past three seasons. His name is Evan Johnson (Quarterback). The 6-3, 200 pound Johnson has directed the Patriot offense since the 2nd quarter of the opening night of his freshman year. Evan is a definite passing threat on every down for super coach Shawn Mulligan’s A/C offense. So, last year, a season that saw Adams Central finish 8-3, the Patriots threw the football on 57.6% of their plays. And what does that have to do with Gabe Conant, you ask?

Check this out. A/C ran the ball just 42.4% of the time in 2018, yet Conant still churns those 1,283 yards in 11 games. Still not an abnormal statistic, but when you dig a little deeper, you see that Gabe had only five 100 yard rushing games and two of those were 114 yard efforts. So, what gives here?

Remember, Adams Central called running plays just 42% of the time, but on three occasions last year, they turned Gabe Conant loose, rushing the football 71%, 74% and 61% of the time in those games.

The result? Conant rips off 338 yards on 20 carries with 4 TDs against a good, Marty Hingst-coached Milford team, goes for 167 big ones and 2 scores versus Holdrege, then bolts for 172 yards and 3 TDs in the Cozad game. The 74% rushing plays occurred in that Milford game by the way.

The Adams Central coaching staff is doing things the right way for certain, but never underestimate what Gabe Conant can do when he gets the football, especially if Coach Mulligan fells like turning him loose. The young man has terrific football foot speed and possibility the best vision in Class C-1. He is a glider and slider, weaving his way through defenses like smoke through a keyhole and has the wheels to break the long TD run.

Bryce Kitrell can do it all for the Bluejays. The Bluejay Do-It-All ran for 1,242 yards and 16 TDs in 2018,, caught 16 passes out of the backfield, good enough for 213 yards and a score, and racked up 472 return yards including a KR touchdown. All in all, Kittrell accumulated 2,020 all purpose yards for 8-3 Ashland-Greenwood last season.

On defense, Bryce recorded 70 tackles, 4 of which were QB sacks and tacked on a Pick 6 in a 28-0 win over Falls City.

Bryce Kitrell has elite, sprinter’s speed, patience, and incredible strength all wrapped up into one top notch football package. Although he certainly wouldn’t need the assistance, it almost seems like Kitrell covers his entire football uniform with a slippery substance the way would-be tacklers slide off him like hot jelly on a piece of warm toast.

Naw...that’s just an illusion. In reality, the defenders are bouncing off a body that is well formed from years of weight room dedication. That, plus :10.9 speed are a lethal combination, friends.

And about those aforementioned bloodlines. Older brother Bo Kitrell recently concluded a football career at Nebraska, while a brother three years older, Brett, is currently a sophomore offensive lineman for Frankie Solich at Ohio University. And where did these bloodlines start? Well, Dad Barry Kitrell is a good place to begin and no, we’re not leaving you out, Mom (Amy).

Bryce’s father Barry was Ashland-Greenwood’s head football coach from 2003-2008. Prior to that, he was an assistant for six years for the Bluejays. When Dad announced he was stepping down to watch his clan play the game of football, Bryce Kitrell only was in kindergarten but oldest bro Blake was just set to enter his Freshman year at A/G.

Right now I’d say Bryce, the youngest of the Kitrell boys, must have picked up something from Dad and his older brothers along the way, and the fact Bryce has a super head coach like Ryan Thompson doesn’t hurt matters either.

I can feel a very special season coming up for this young man. You may want to watch for those Ashland-Greenwood stats each week this Fall. Trust me on that one.