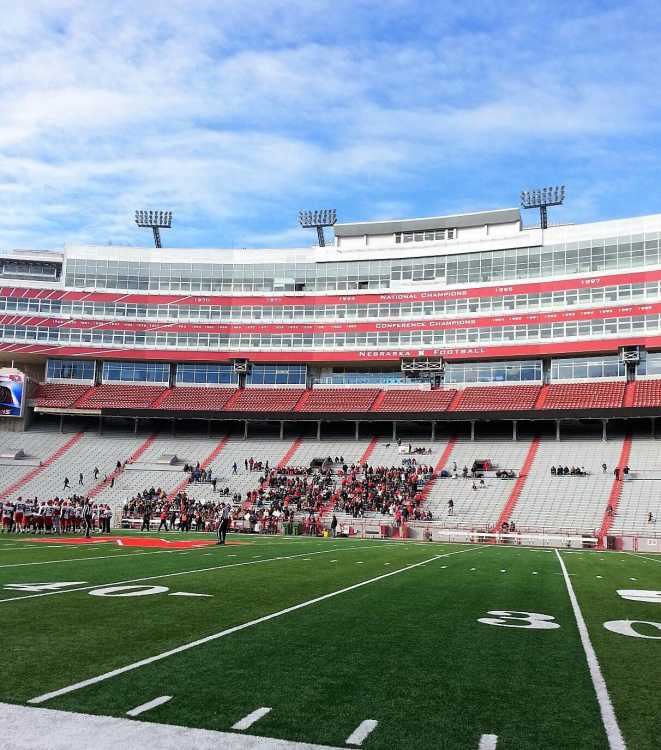 The destination of every 11-Man and 8-Man football player in Nebraska. I call it the Promised Land.

Great cross section of talent when you combine this trio’s gridiron abilities.

*Dex Larsen-Blair - 5-9, 195, Junior (1,355 yards) - Big boy who can pack a punch and drag defenders with him after contact. Larsen exploded on the scene a year ago for a 7-4 Blair that boasted a Class B playoff win before bowing out to eventual state champion Omaha Skutt.

Dex seemed to really figure things out in game 6 against Schuyler when he bolted for 209 yards and three TDs. The hard charging sophomore then followed it up with rushing games of 159 against Elkhorn Mt. Michael, 215 versus Bennington, 147 against Omaha Roncalli and his 212 yards and 3 touchdown performance in the Bears 54-52 playoff win over Grand Island Northwest. That’s 942 of his 1,355 season rushing yards total in that span of five games against some pretty salty competition.

You will hear the name Dex Larsen frequently the next two seasons, not in Blair Bear country, but state-wide. Big dude runs extremely hard, shows good balance, and honestly has pretty decent speed. If Dex can enjoy the fine O-Line blocking he did in 2018, I cannot see anything other than an injury stopping the Blair tough guy from adding two more 1000 yard rushing seasons to his chart.

*Connor Pohlmeier-Plattsmouth - 5-9, 145, Senior, (1,253 yards) - Pohlmeier may not be the biggest guy on the block, but he really is a special football player. Last season, Connor ripped off 1,253 yards and 11 touchdowns while playing for a 3-6 Plattsmouth team. Only powerful Waverly and Norris were able to hold the Blue Devil star under a hundred yards rushing.

Now, don’t think for a minute that last season was a fluke for this kid because the darting Pohlmeier scooted for 928 yards as a sophomore playing against teams like Elkhorn, Elkhorn South and Gretna, all of whom are Class A these days. Norris and Blair were also on the Bair slate in 2017 and they were certainly no slouches.

Connor is stronger than he appears and has remarkable vision and patience as a ball carrier. I think his greatest asset is the way he follows his blockers. It starts slow-with-the-flow on those outside plays, then suddenly Pohlmeier fires up the jets when he sees an opening. It’s like the lad is shifting from super low gear to full throttle in the blink of an eye.

Very good football player who reminds a little me of former St. Paul great Kyle Kasperbauer, who was one of my favorite RBs ever.

*Ashton Hausmann-Norris - 6-0, 215, Senior (1,001 yards) - My wish for this young man is one full football season of good health. Ashton Hausmann gained his 1000 yards last year playing in only 8 of 10 Norris football games, and if the truth were known, he was really healthy in two of those 8 outings.

Hausmann is not only a :10.6 hundred man, but a religious weight room occupant that can squat over 475 pounds and do a 32” vertical. Coach Jacobson and his all-star coaching staff continuously crank out freakishly outstanding running backs who usually have to wait until their junior season to crack the starting lineup and follow the huge footsteps of a two-time 1000 yard runner.

Before Ashton Hausmann it was two seasons of Austin Schultz, before Schultz it was 2 years of Brody Zabel, before Brody it was three years of James Kruger. You get the picture, always someone posting crazy rushing marks for at least two seasons at Norris.

Now it’s time for speedy Norris RB to really shine and if healthy, the guy could really post some big, big numbers for the Titans. Hausmann, who just recently accepted a preferred walk-on offer from Scott Frost and Huskers, should have a very good offensive line creating those openings for him in 2019. Aston should also have a good enough overall surrounding cast to place his Norris team in the Pre Season Top 5 in Class B.