Mothers and their Baby Boys (Everyday should be Mothers Day.) 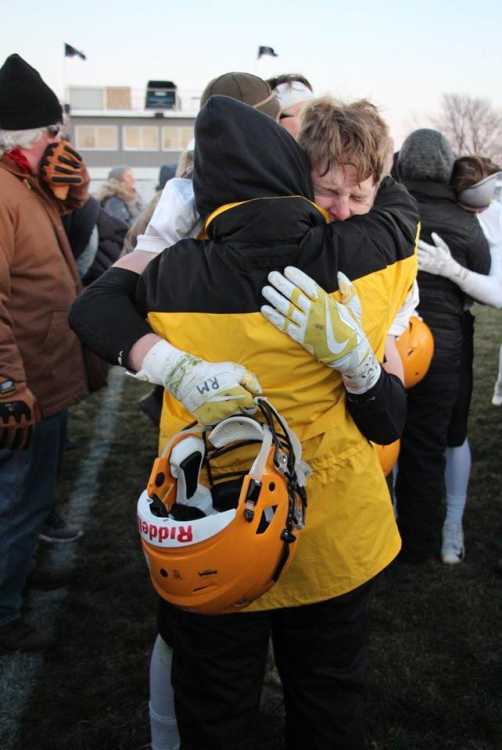 Eleven or twelve years ago I wrote an article about the experiences I had encountered over the years on high school football sidelines involving the players and their Mothers. Since then, what I witnessed has been magnified many times over.

Here is a “remastered” version, if you will, of my original “Mothers and their Baby Boys.”

The year is 1965 and the setting, a frozen football field in Shelton, Nebraska with a baseball diamond intersecting the gridiron near the end zone on the west side. I take the pitch from quarterback Carl Tesmer, turn upfield and make a beeline down the right sideline headed for a touchdown. It looks like clear sailing except for one stocky little player who will surely never catch me.

Instead of taking the straight route, I plant my foot and cut back inside. Bad idea. The stocky little guy, the late, great Daryl Blue gives me a gigantic shove and I land on the frozen 1st base line of the baseball field. My shoulder is dislocated big time. I will never forget what flashed across my mind at that very instant……….. I wondered if my mother Dorothy was on the sidelines. Shame on me. Football is a man’s game and the last thing any tough high school player should be thinking about during a game is his Mom………...or is it?

Several years back, I went to Palmer to watch a fabulous running back from Cedar Bluffs named Ben Hansen. The dude was a three time 1000 yard rusher and a vicious, head hunter from his linebacker position, just the real deal. Pure football player inside and out.

Walking off the sidelines at halftime, I encountered some Cedar Bluffs fans and was telling them how impressed with this Hansen kid. A tiny little lady must have overheard my conversation because she approached me, grabbed my sleeve and said “That’s Ben, my Baby Boy.”

A few years later I took my young son Rob to Kenesaw to watch a young back named Sean Daly, who was approaching the 2000 yard rushing mark. Daly was being pounded all night, as he had been the past several games and could finally take no more. He finally staggered off the field after a brutal hit and fell to the ground.

The game naturally continued, meanwhile the Kenesaw star lay on the ground unattended for a few minutes. Not long after that, a pretty lady stepped over the thick wire fence, went to a knee and started massaging Daly’s back.

My son, who had not noticed the lady, turned to me and asked “Dad, where is their trainer?” I pointed toward the lady and told him “Rob, they have no trainer here, but that lady is Sean Daly’s personal trainer.”..........it was Daly’s Mom.

It seems so ironic in some ways. It’s the Dads that always work with their sons, training them to be rough, tough football warriors, able to withstand any punishment the opposition can dish out. Bring it on baby, my Dad taught me to be brutal on the football field. If anyone is dishing out pain, it should be me.

But time after time, year after year, when one of these players, who has been pumped and drilled to be oblivious to pain, finally goes down with an injury, the person who first arrives on the scene is the figure he wants to touch him and lay a loving hand on his fallen frame.

It is the same hands that wash his soiled and odor-ridden football clothing. The same smile that greets him in the morning and can melt his heart at any hour of the day or night. The same person who never misses a game when nobody else shows. The same hands that can even dry his tears when he would allow no other living, breathing soul to witness him weeping, especially from pain.

No, there will no back rubs from a Dad, that wouldn't be right. It would not heal or help matters. Only a Mother’s touch will suffice, a touch that can never be duplicated.

I've laid my eyes on it dozens of times over the past 50 years, a Mother running onto the field, her quivering hands covering her face momentarily, careful not to let her son see her facial expression. Then his eyes search in fear, his toughness is suspended in time, frozen for the moment. He's looking for HER loving hand and he knows nothing else will work.........nothing.

Maybe the toughest thing I have personally witnessed the past several years is a Mother seeing her son’s final game come to a close. The last one. There will be no more. All these player’s Moms huddled in a tight circle, holding hands tightly, telling each other, “What are we going to do on Friday nights now, it’s all over now...forever”

And they all know only the chosen few will go on to play on Saturdays, and even if they do, it will not be the same. The comradery, the high school pride, the reassurance your baby boy will be home before you go to sleep on Gameday……..and you will talk and ask him if anything still aches, because if so, you will know how to ease the pain.

It seems to me the bond between Mothers and Sons has progressively become stronger as my years on the sidelines have started to mount, and maybe it’s always been there but I just failed to notice.

What I have noticed though, is a lot more football Moms make sure they are expert photographers to assure themselves of a closer view on those sidelines. Good angle ladies, and all these photographer/Moms I have come in contact with recently are pure professionals that show such little emotion you would never dream they had a son on the playing field.

Most Moms still remain in the bleachers, but when the game ends and the fans pour on the field, you really witness the precious bond between these Mothers and their sons. Dads are usually there, but the first hug always, always is reserved for that special lady who has been there for the player through thick and thin. After all, their lips would never utter “you weren’t tough enough out there tonight.” Not a chance.

My parting words to every single high school football player or any male athlete who is blessed to have a Mother who is still on this earth…………...

Make certain, in your mind and heart anyway, that everyday is Mother’s Day. It is not a crime to tell her “I Love You” or “Thanks for always being there for me.” You could live to be a hundred years old and never realize all the tiny, intricate things she has done for you throughout the years, things we sometimes take for granted and have come to expect as being “part of a mother’s job”............but you know better than that.

And so it is, after watching over 50 years of high school football from point blank range on those beautiful sidelines, which do you suppose are the memories that come to my mind first? You know, the Big ones.

No, it is not a football team winning a state championship, a running back exploding for 300 yards, a runner breaking the 1000 yard rushing plateau?

An offensive lineman executing a crunching block, an entire football team turning toward the stands between quarters to give their Band a round of applause?

The most impressive thing I have witnessed over and over again in 50 years of watching high school football?

The unbreakable bond between Mothers and their Baby Boys.