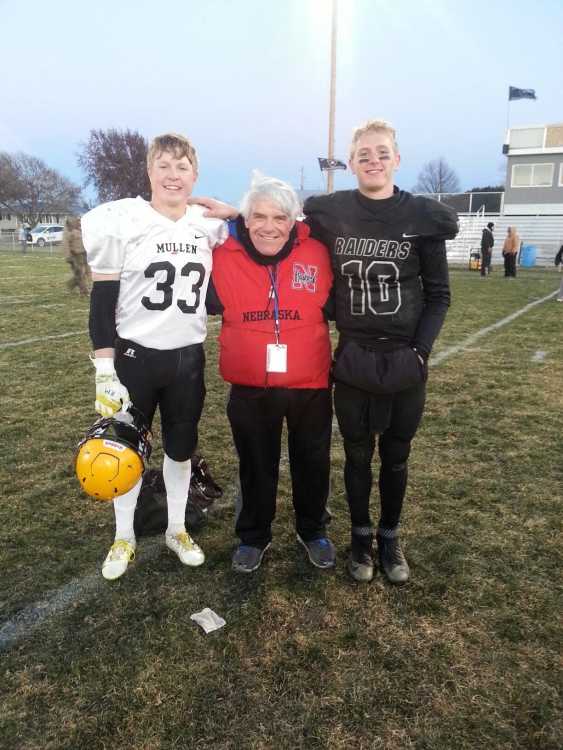 The unbeaten Mullen Broncos punched their ticket to Memorial Stadium and the Class D-2 finals the hard way this cold and windy, but sunny Lawrence afternoon.

Outplayed and trailing 24-6 at halftime to a surging Lawrence-Nelson football team, three-time 1000 yard rusher Lane Edis and his Mullen cohorts reeled off 30 unanswered second half points to post a dramatic, come from behind 36-24 victory.

Edis, who entered the semifinal matchup with 2,291 rushing yards and a fat career 6,396 yards, ripped the Raider defense for 201 second half yards and 3 touchdowns, on his way to a game and season high 312 yards on 39 carries.

While Edis and the Bronco offense was putting on their 30 point rally show in the 2nd half, the Mullen defense was fashioning their own bone crushing 3rd and 4th quarter film clip, limiting the high powered Lawrence-Nelson offense to 68 total yards and 4 first downs.

Sacred Heart was just eliminated in last week’s quarterfinals, Johnson-Brock will be Mullen’s opponent in next Monday’s D-2 Championship game, and Lawrence-Nelson avenged the 60-12 regular season loss to Kenesaw with a 28-12 win over the Blue Devils last Tuesday.

Besides, I saw this Lawrence-Nelson team lay 90 points on a not-to-shabby Giltner team earlier in the year.

It took a sum total of 4 minutes, 16 seconds and 8 plays for Lawrence-Nelson to score on the opening possession of the game. All-State Quarterback candidate, Lane Heikkinen did the major damage on the drive, following the crisp blocking of his O-Line for 55 of the total 65 yards.

The slender, hard running 165 pound senior, swept 25 yards for the opening touchdown right off his left tackle. Heikkinen hit an all-by-his-lonesome Brody Himmelberg for the 2-point conversion to make it 8-0.

After a couple of major penalties thwarted Mullen’s initial drive, Lawrence-Nelson once again rode the strong legs of Lane Heikkinen, who carried every single play of the Raiders 5 play, 45 yard drive, crashing in from 4 yards out for the score.

Heikkinen again connected with a wide-open Brody Himmelberg for the double point after, and it was 16-0 in the time it takes to count 30 coyote carcusses.

A questionable roughing the punter call earlier in the 2nd quarter may have given Mullen the spark they needed to score their first TD of the game.

Lawrence-Nelson punter Blake Janda watched the center snap sail over his head after Mullen had forced a 4th and 13 on the Raiders 33 yard line. Janda picked up the ball and took off down the near hash with several Broncos in hot pursuit.

Janda, well out of the pocket, somehow managed to put a foot into the football, sending the punt into Mullen territory. But it was deemed the Broncos had roughed the punter.

Now...with all the “rugby” style punting going on these days in prep football, there may be a clause that states “roughing” can be called if it is of a flagrant nature. However, I’m not sure about that one.

Nevertheless, Lawrence-Nelson maintained possession of the ball with that 16-0 lead, and a chance to drive it down and make it a 24-0 bulge.

Didn’t happen. An angry Mullen defense halted the Lawrence-Nelson drive at the Bronco 16 yard line and it was time for Coach Mitch Pfeiffer’s offense to go.

It took only five plays and a Raiders personal foul penalty for Mullen to go 69 yards for a score. Lane Edis sprinted 27 yards on the drive’s 2nd play, then scooted in from 24 yards out for his 13th touchdown of the playoffs and 39th of the season.

Lawrence-Nelson must have been unphased by the Mullen score, because on the ensuing Raiders possession, 3 plays and a minute, 35 ticks later to be exact, Lane Heikkinen found a streaking Brody Himmelberg for a damaging 51 yard scoring strike.

Heikkinen walked in for the two-point conversion and Lawrence-Nelson took a 24-6 lead into the halftime break.

The 3rd quarter did not begin the way Mullen fans wanted. The Bronco’s, who won the opening game toss and decided to defer, received the 2nd half kickoff and drove all the way from their own 15 to the Lawrence-Nelson 33 yard line before the drive stalled.

Turning point, right here, right now for Mullen. You let the Raiders take it down and get a possible 32-6 lead and it’s suddenly hoops season for the Broncos.

Didn’t happen. Three and out for Lawrence-Nelson. It’s time to get the Bronco offensive machine in full punish mode with 7:20 left in the 3rd. Better make it happen boys.

They did…..but not without some chewed-up fingernails in my rear view by scores of Mullen faithful. ]

The Broncos faced a 3rd and 12 on their own 24 yard line after a Lane Edis was spilled for a 2 yard loss. Then came a pair of incompleted Brady Grace aerials. Crunch time.

Not a problem. Gracey sets his feet in the pocket and fires a spinning perfection of 32 yards to Brendon Walker. The completion flipped he field to the Raider 24 yard line, but an unsportsmanlike conduct call on Mullen the following play, put the ball in reverse.

All the way back to the Raiders 37 yard line.

Now things really get tense on the Mullen side, meanwhile the Lawrence-Nelson faithful are thinking about where to stay next Sunday night in Lincoln.

Speak of the devil. The very next play, Lane Edis breaks one his Dad’s famous “Wade Edis sweeps” around the right side for a 37 yard touchdown and Bronco Ball is starting to roll.

Alright….you’re still behind 24-14, Mullen. Is it time for one of those demoralizing, time-consuming, Mike Brown, Bronco drives?

Must have been, because Mullen fashioned a 13 play, four minute, 21 second drive that culminated with a 4 yard scoring toss from Brady Gracey to glue-handed Zach Sweet. Gracey pops a double PAT pass completion to Ty Durfee and the Broncos are within 24-22.

Now…..Lawrence-Nelson may have felt Big Mo switching sides, but with a playmaker like Lane Heikkinen on your team, some points are within a quick reach in the form of a long TD pass or a #10 scoring run.

But the Mullen defense had other plans.

After forcing another 3 and out, the Broncos took only 3 plays to gain their first lead of the frigid contest. Edis ran for 4 yards, then 3 more, before busting loose for a 47 yard scoring sprint that left Lawrence-Nelson defenders grabbing nothing but the frozen air.

Jade Lovitt then caught Brady Gracey’s 2 point conversion pass, nearly sitting on his behind, making it a Mullen 30-24 lead with 6:45 seconds remaining in the game.

Lawrence-Nelson then started to move the ball on the ensuing possession, which began on the Raiders 15. Super-Coach Brian Blevins chose to ride the powerful legs of 190 pound Jacob Sharp, a hard running senior.

Sharp gained 4 yards, then 5, then another 7 for Raider 1st down. Nine yards shy of midfield, Mullen must have sensed a Lane Heikkinen pass by the way their defense was lined up with Edis and senior Justin Wiens situated to guard the middle space, and chase potential pass receivers.

Lane Heikkinen did pull the trigger on 1st and 10 for the Raiders. A fine pass it was, but Lane Edis was there to leap into the air to defend throw, and in the process, tip the pass in the air where it was gathered in by a Johnny-on-the-spot, Justin Wiens.

Ride the Stallion, baby. Brady Gracey feeds the ball to Lane Edis for a yard, then Jade Lovitt for 5, back to Edis for 3, and now it’s 4th and 1 at the Lawrence-Nelson 39. Edis powers his way, dragging would-be tacklers for five yards and a first down.

We’re at the Raiders 34 now, and Edis goes for 3, then 4, then his clinching 31 yard touchdown run with 1:55 left. The double PAT conversion pass is broken up and the Broncos have the 36-24 lead that will end up the final count.

As mentioned prior, Lane Edis finished the game with 312 yards on 39 touches and 4 touchdowns. QB Brady Gracey completed 4 of 10 passes for 76 yards and a score. That elevates the senior QB over 1000 yards passing this season, with an unofficial 1,056 yards and 15 TDs, with just 2 picks.

The very outstanding Lane Heikkinen led the Lawrence-Nelson ground attack with 111 yards on 24 carries and that pair of opening quarter touchdowns. The classy senior also threw for 90 yards and a touchdown this afternoon.

Lawrence-Nelson completes their season at 8-4 and continues to be a very strong 8-Man program under the masterful guidance of Brian Blevins.

It’s on to Memorial Stadium in Lincoln for 12-0 Mullen, who will face pre-season favorite Johnson-Brock, a team who blasted an outstanding Humphrey St. Francis squad, 58-24 tonight.

There is one record young Lane does not yet have at Mullen. You see, his father Wade set the Single Season rushing record up there when he rambled for 2,728 yards back in 1990. Wade and his Mullen pals won a Class D-1 championship that year, beating Kenesaw 44-34 right on the home field. Wade rushed for 399 yards on a monster 48 carries that evening and scored a 62 yard touchdown on the very last play of his career.

Lane unofficially needs 126 yards to pass Dad’s record. What does Wade Edis say about that? After the game this afternoon, he told me “Let him have it”.

What the heck Mr. Edis, it’s all in the family anyway, right?