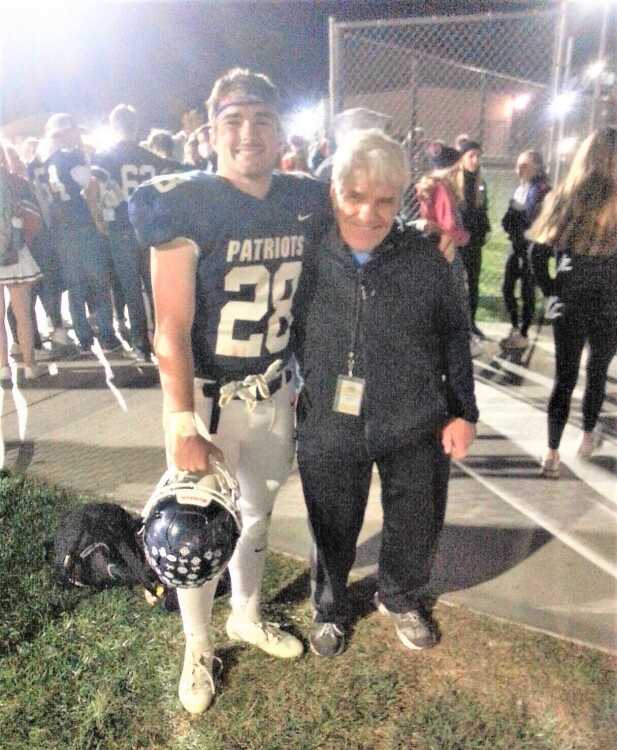 *Hyatt Collins-Adams Central - Preseason All-State running back broke loose for 183 yards and 4 TDs on just 14 touches in Adams Central’s 41-13 victory over Holdrege. Collins scoring dashes came from 55, 5, 33 and 70 yards out. The 185 pound junior was also lethal as a pass receiver out of that Patriot backfield, catching 3 passes for 52 yards, one of which was a 30 yard scoring strike from new QB Jacob Eckhardt.

This young man is really, really good in open space.

This young man is one of the most talented, electrifying runners in all of 8-Man football. In my many years of watching high school sports, I have found that some elite track sprinters are just a bit shy of contact on the gridiron. NOT Isaiah Zelasney. This dude can bring the wood during a run. There was a highlight reel 65 yard touchdown run last Friday in the Riverside game that mimicked the famous Tommy Frazier run in the Florida national championship game.

If Zelasney stays healthy this year and the next, he will be a shoo-in for the 5,000 career rushing yard club. Easy candidate for back-to-back 2,000 yard rushing seasons if Osceola can squeeze some playoff games in the next two years.

*LJ Richardson, Dae'Vonn Hall, Maro Smith, Luke Johannsen, Daniel Kaelin-Bellevue West - Richardson picked up where he left off a year ago by rushing for 146 yards on 21 carries and 4 touchdowns in the top ranked Thunderbirds 58-14 Thursday night win over Omaha Burke. Richardson scored on runs of 3, 2, 2 and 6 yards, as Bellevue West sprinted to a 37-14 halftime lead and never looked back.

QB Luke Johannsen hooked up with Dae’Vonn Hall for scoring connections of 60 and 35 yards in the 2nd quarter. Johannsen ended the evening by completing 8 of 16 passes for 142 yards and the pair of Hall touchdown catches. Sophomore Daniel Kaelin came in to hit 7 of 11 tosses for 120 yards and a score.

Dae’Vonn Hall, a sophomore with multiple Division One offers, ended the night with 4 receptions for 131 yards and the two TDs. And, it was 6-0, 1965 OLB Maro Smith leading the way on defense with his 7 solo tackles, 2 assists and 2 tackles for losses.

*Cade Hosier-Elmwood-Murdock - The 5-9, 170 pound junior RB was just a blur to Mead in the Knights 74-50 win last week. Hosier, whom I told you about earlier in August, exploded for 362 yards on 20 carries, 4 rushing touchdowns, a kick return score and a 37 yard pass reception for another tally. Otherwise, it was a quiet night for Hosier.

Three of Cade’s scoring runs covered 52, 60 and 53 yards and were pretty much “Katie Bar The Door” once he broke through the defensive front. His kick return appeared to be somewhere around 74 yards AFTER a bobble, no less.

It’s no wonder opponents have no idea what the kid looks like because all they see is his backside pulling away for a TD. I WILL see this lad play in a live setting.

*Max Buettenback-Lincoln Southeast - Solid 6-1, 185 pound junior rushed 21 times for 174 yards and a pair of scores in the Knights 29-19 win over Omaha North. One of Buettenback’s TD runs was a stunning cut back 70 yard dash that eventually saw Max cruising down the Omaha North sideline. Buettenback also tossed a touchdown pass and made 3 tackles in the game. Mark this young man down for a thousand yard season in 2021 right now.

*Kytan Fyfe-Grand Island - Islander QB/LB did about everything but drive the bus to Kearney and back in a 38-35 loss to the Bearcats. The Renaissance Man threw touchdown tosses to Cole Bauer (12 yds) and Will Knuth (59 yds), CAUGHT a 17 yard scoring strike from Cohen Evans, ran for a 24 yard score, made 12 tackles on defense and sailed a punt 56 yards. 108 yards passing, 107 rushing, 17 receiving along with all the other intangibles make Kytan Fyfe a top notch All-State candidate. BALLER!

*Tyson Dankert, Trey Kennedy-Kenesaw - Danker and Kennedy combined for 353 yards rushing in the Blue Devils 58-22 win over Axtell. Dankert, who hit the 4,115 career rushing yard mark in the game, ran for 231 yards on 19 tries and 4 TDs. Dankert also completed 4 of 5 passes for 93 yards and a TD pass to Lane Kelly to keep that Axtell defense honest.

The hard running Trey Kennedy added 122 yards on 12 carries and a pair of scores to go along with his 9 tackles on defense.

*Cael Wichmann, Jared Kuhl-Platteview - These two junior stars led a balanced Trojan attack in Platteview’s 35-14 opening night win over Falls City. Wichmann, the sharp shooting All-State basketball phenom, is quite the talent on the gridiron as well. Cael ran for 207 yards on 25 carries, while classmate Jared Kuhl completed 15 of 24 passes for 159 yards and 3 touchdowns.

Kuhl was dangerous in this contest, hitting SEVEN different receivers on the night with Dayton Swanson, Brock Hudson, and Elliot Steinhoff all grabbing touchdown receptions in the win.

*Aiden Kuester-Neligh-Oakdale - Kuester is just a junior and is already one of 8-Man football’s premier players. Good grief, talk about a Swiss Army Knife, BUT the Warriors needed all of Kuester’s skills in a heart pounding 54-52 win over Bill Mimick’s Humphrey/Lindsay Holy Family squad.

All Kuester did was complete 17 of 25 passes (68%) for 260 yards and 5 TDs, rush 32 times for 154 yards and another score, and make 12 stops on “D”. Three of Aiden’s TD passes were fielded by junior Carson Whitesel. Sophomore Bryson Gadeken and Talon Krebs were responsible for the remaining two. Whitesel ended the night with 165 receiving yards on just 4 catches.

*Cole Murray, Devon Moore-Waverly - Senior Do-It-All quarterback rushed 20 times for 132 yards and completed 6 of 12 passes for 64 yards and two touchdowns in the Vikings 20-14 win over Elkhorn North last Thursday. Cole also picked off a pass on defense and ran for a critical first down in the Red Zone to ice the game as time ran out.

Moore was also a key figure in the Vikings victory with his 36 and 24 yard field goals.

*Isaac Kracl, Braden Schmeckpeper-Crete - Senior RB Isaac Kracl gained steam as the game progressed, rolling for 219 yards on 31 carries and 3 TDs as Crete fell short, 28-27 in overtime at York. Kracl flashed good speed and power in this one even through Crete came up short. Quarterback Braden Schmeckpeper looked poised in the pocket for the Cardinals, completing 10 of 17 passes for 139 yards, which included a TD pass to senior Will Chica.

*Koa McIntyre, Jarett Boggs, Gavin Logemann-Fremont Bergan - Wyoming commit Koa McIntrye led the Class C-2, #1 Knights to an opening night 35-7 win over highly touted Yutan. The fleet-footed senior ran 18 times for 165 yards and two scores and completed 7 of 16 passes for another 40 yards, which included a 5 yard TD toss to Cal Janke. Fellow All-Stater Jarett Boggs was demon on defense, making 9 tackles, 3 of which were for losses.

Gavin Logemann actually broke the game open when he brought a Yutan kickoff back 93 yards for a score. The long distance touchdown came after Yutan trailed just 14-7 at the 2 minute mark of the 2nd quarter.

*Braeden Guenther, Cody Brugeman-Bloomfield - Holy Mother of Mercy, I may have to up my blood pressure dosage after reading that Bloomfield actually threw the ball ELEVEN times in the Bees 60-7 win over Homer. Coach Matt Kuchar’s boys couldn’t have thrown any more than 30 some passes in all of 2020. BUT, enter FRESHMAN QB Braeden Guenther. Not only did Guenther throw 11 passes, but he COMPLETED all 11 attempts for a gaudy 205 yards and FOUR touchdowns. Last year the Bees had 350 passing yards in the entire 9 game season!

Oh, now don’t think for a minute that Bloomfield abandoned the running game. No Sir. All-State candidate Cody Brugeman broke loose for 142 yards on 13 carries with touchdown runs of 2, 13 and 46 yards. As for Mr. Guenther, the 9th grade star nailed Layne Warrior for a 31 yard score, Wiley Ziegler from a yard out, then Layne Warrior again with a pair of 8 yard TD tosses.

*JaReese Lott-Busby, Beni Ngoyi-Lincoln High - 6-1, 210 pound senior QB JaReese Lott-Busby threw only 15 passes in the Links exciting 26-24 win over Lincoln North Star, BUT he completed 8 and FOUR went for touchdowns, a pair of those going to Beni Ngoyi.

Lott-Busby’s touchdown passes to the speedy Ngoyi covered 71 and 75 yards, Beni’s only two catches of the game. JaReese’s remaining two TD passes were hauled in by Javon Leuty (65 yards) and Adonis Hutchinson (37 yards out).