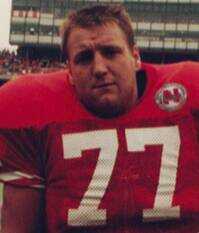 Wausa's dominating Lance Lundberg went on the be a star offensive lineman for the Huskers.

As an 8-Man Football standout in high school, Lance was a dominating blocker and defender that led the Vikings to the state playoffs for the first time in school history (1988). During both his junior and senior seasons, he was named 1st Team All-Conference, 1st Team All-State (D-2), and 1st Team All-State (All-Class). Incidentally, Lance was also the first 8-Man football player in history to be named to the Omaha World-Herald Super-State First Team squad.

As a senior, he led Wausa’s defense with 160 tackles and was selected to play in the 1990 Nebraska Shrine Bowl. Lance went on to a highly-successful college football career with The University of Nebraska, where he was a scholarship player for Coach Tom Osborne. He became a 3 year starter (as part of a dominating offensive line unit that featured three players from Nebraska’s Eight-Man Hall of Fame- Lance Lundberg, Ken Mehlin, and Jim Scott). During his time in Lincoln, he was named team captain for the Cornhuskers, and played in 3 Orange Bowl games (including the 1993 National Championship game). As a college senior, he was named 1st Team All-Big 8 Conference and was chosen Honorable Mention All-American as an offensive tackle. Lance was then selected in the 1994 NFL draft by the New Orleans Saints. The NEMFCA is honored to now welcome him into the Eight Man Football Hall of Fame Class of 2020-21.