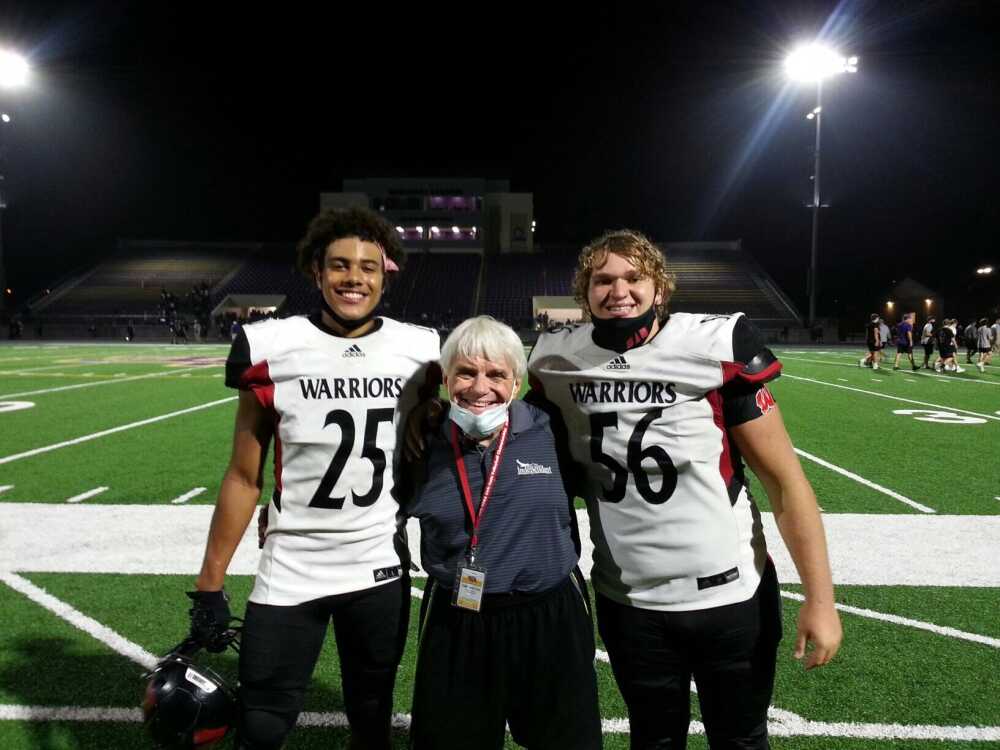 Junior Dominic Rezac ran for 116 yards on 16 totes and scored from 2 yards out.

Dominic Rezac has 969 yards rushing with 16 TDs, Koby Bretz has 32 receptions for 479 yards and 6 TDs, while Minnesota pledge Avante Dickerson is next with 21 catches for 394 yards (6 TDs)

And then of course, there is offensive center Bo Lucas, who calls the signals for the O-Line and is a terrific leader for the Warriors after playing Class B football just a year ago.

*Kale Bird-Bennington - Senior quarterback was sensational in the Badgers 52-26 win over Seward. Bird completed 17 of 19 passes for 293 yards and 3 touchdowns, plus rushing for 42 yards on 8 carries and another score.

Junior Dylan Mostek did a fine job offensively, filling in for the injured Tyler LeClair. Mostek ran for an even 100 yards on 18 totes with a 45 yard touchdown scamper. Clay Pohlman led Bennington’s “D” with 16 tackles (7 solos)

The Badgers DO miss Tyler LeClair, who had 771 yards (12 TDs) on offense and a staggering 93 tackles on defense with 42 bruising solo stops. Those kind of stats are difficult to replace. LeClair is a STUD who went out in the regular finale against Omaha Gross.

*Colin Ludvig, Grant Kolterman, Gavin Pokorny-Wahoo - Running back Colin Ludvig ran for 126 yards on 23 carries with a 6 yard touchdown run in the Warriors 1st Round 34-14 playoff win over Western Nebraska invader Mitchell. Big Grant Kolterman carried the pigskin only 3 times, but made them count by rushing for 63 yards and a pair of touchdowns (1, 51 runs).

Curtis Swain led the Wahoo defense with 10 tackles (7 solos), Gavin Pokorny also had 10 (7 solos), Kolterman matched that with his 10 stops (5 solos) and Malachi Bordovsky added 8 stops with 6 solo tackles in there.

*Nigel Bridger, Max Buttenbach - Lincoln Southeast - Crete transfer Nigel Bridger ran for 151 yards on 18 carries with TD dashes of 8 and 17 yards in the Knights 31-7 playoff win over Columbus. Sophomore Max Buttenbach added 111 yards on 18 touches with a pair of 2 yard scoring runs in the win. Nataniel Gifford, of course, led the Southeast defense with 11 tackles and now has 56 for the year.

Michael Andel, Kyle Napier-David Aquinas - Junior fullback Michael Andel punished the Norfolk Catholic defense with his 140 yards on 27 carries in the Monarchs 27-10 win over the Knights, but it was Kyle Napier that provided the scoring punch.

Napier picked off a Cayden Cunningham aerial, turning it into a 55 yard pick six to open up the scoring for Aqiunas. The senior leader also hit the end zone with a pair of fourth quarter runs covering 11 and 15 yards.

Defensive coordinator Tony Smith’s troops were also very stout in the win, limiting Catholic to just 209 total yards for the entire game. The crushing blow came in the 3rd quarter when Tony’s defense held the Knights to just 14 yards and one lonely first down.

6-2, 190 pound senior Quarterback Dilan Krause led all rushers with 99 yards on 14 carries and scoring runs of 14 and 48 yards. Cole Ballard was next with 75 yards on 14 totes and two TDs covering 5 and 6 yards. Ben Warren added 75 yards/9 touches, Will Scradis gained 64 yards on 7 totes with a 12 yard TD scamper, and Makhi Nelson-Douglas added 51 yards on just 3 tries in the playoff win.

The Vikings get the opportunity to avenge one of their two losses of the season when they travel to Elkhorn this Friday for a Class B quarterfinal matchup. The Antlers clipped Waverly 13-7 in a bruising defensive battle back on Thursday night, September 10th.

*Jake Garcia - Omaha Gross - 180 pound sophomore runner cracked the one thousand yard rushing mark in the Cougars 47-21 loss to Hastings in the 1st Round of the Class B playoffs last Friday. Garcia finished the 2020 season with 1,051 yards for the 3-7 Cougars.

*LJ Richardson, Luke Johannsen, Michael Huffman - Bellevue West - Richardson, the terrific junior running back, rolled for 156 yards on 19 totes with touchdown runs of 1, 6 yards in the Thunderbirds 45-13 playoff win over Lincoln SW. The victory was the 19th consecutive win for the defending Class A champs.

Junior QB Luke Johannsen was sharp in completing 17 of 32 passes for 187 yards three touchdowns in the win. Keegan Johnson hauled in two of Luke’s TD tosses covering 29 and 6 yards, while Micah Riley caught the other (23 yards).

And…..Super Coach Michael Huffman picked up his 100th Career Win in that Thunderbird triumph over Southwest. It seems like Huffman just started coaching a few years back. Yes, he’s that good.

Preps solid defense was paced by #44 Tony Militti, who logged 9 tackles (8 solos), #51 Joey Gregowski, added 8 solo stops, while Michael Barrett, chipped in 7 more solo tackles. Those men at Prep know how to wrap up when they bring the wood..

*Jimmy Quaintance-Millard North - Splendid Millard North quarterback closed out his 2020 season by rushing for 156 yards on 24 carries with an 11 yard scoring run in the Mustangs 28-17 loss to Creighton Prep. Quaintance was also 9 of 17 passing for 104 yards and a pair of scoring passes, one each to Tyson Johnk and Hayden Froscheiser.

Quaintance concluded the season with 1,220 yards rushing with 14 TDs for Fred Petito’s 4-5 Mustangs

*Noah Walters, Carter Glenn-Lincoln East - Spartan QB was good on 10 of his 16 passes for 139 yards and a pair of touchdown strikes to the now active Carter Glenn in East’s 42-0 whitewashing of North Platte. Walters also rushed 10 times for 109 yards, which is a shock considering the fact he had just 123 yard rushing yards on 62 carries coming in.

The return of the great Cater Glenn is a welcome sight for Walters and the Lincoln East team. Glenn has been out with a torn labrum since September 17th and is one of the finest playmakers in Class A. Why? Glenn has just 14 catches this Fall but 10 of those 14 have gone for touchdowns. Nuff said.