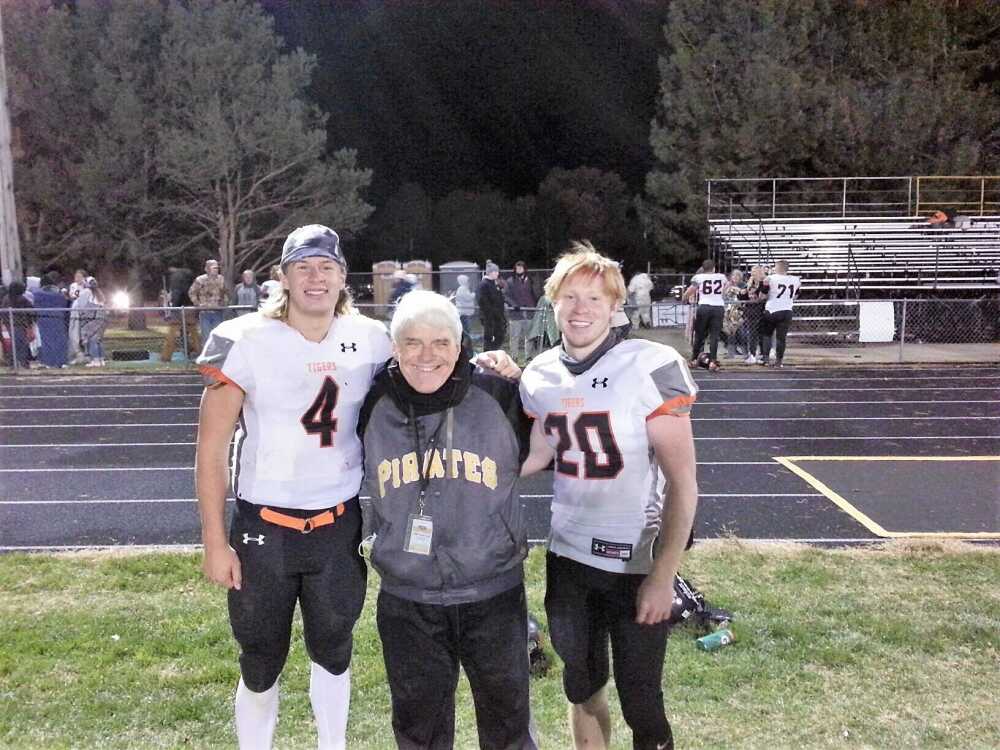 Alright high school football sports fans, raise your right hand if you think Hastings is primarily a passing team. If you indicated “yes”, you are probably right. Through the first four games of 2020 that is. Yep, we’re talking somewhere in the vicinity of 78/22 pass/run ratio.

But a funny thing happened to the Hastings offense on the way to the final game of the regular season. That 78/22 pass/run ratio turned into a 52/48 split unsolvable offensive puzzle for Northwest, as Charlie Shoemaker’s Tigers unleashed a 227 yard ground attack that helped lift Hastings to a 30-19 victory over the home field Vikings.

I’m not going to say I told you so, but you could maybe see this one coming, although it certainly was not as apparent in the Tigers stunning 55-34 loss to Aurora two weeks ago.

And, one difference from last year’s Hastings offense compared to this current group is that All-State quarterback candidate Jarrett Synek, who was 6-0, 185 pound a year ago, is up to a rock solid 6-2, 200 pounds. Add to that fact, Synek is one tough son-of-a-gun who can take the punishment of a solid hit and can dish it out himself;

Putting it bluntly, Charlie Shoemaker isn’t hesitant to let his QB run on those quarterback read/option plays. And tonight, despite taking a pretty good beating from a terrific GI Northwest to the tune of 5 sacks totalling 34 yards, the powerful driving Jarrett Synek still came up just one yard shy of rushing for 100 yards on 13 carries.

And what’s even more impressive is Synek’s demoralizing 4th quarter touchdown runs of 27 and 28 yards to put the game away for Hastings. Yep, after a week off due to a bye week, the Tigers were ready and rarin’ to go on this crisp October night, and Northwest couldn’t find a consistent answer to the Hastings ground attack…...or the passing attack, which boiled down to one single, crippling play just when the Vikings thought they may have seized control of the contest.

The first half of this regular season curtain closer was not for the weak at heart. Down at field level, you could see up close and personal that the defenses were pounding each other with brutal hits, making quarterbacks run for their lives and even a few late out of bounds hits by both teams.

The defenses were so stout, that just 14 points total points were on the board by the time the Northwest marching band took the field for their Salute to the Beatles show at halftime.

Hastings drew first blood in this Classic, taking advantage of a Northwest turnover in the form of a pass interception by Beau Dreher on the Vikings very first possession of the game. It took the Tigers just 6 plays and 76 yards to capitalize on the Northwest turnover, the opening touchdown coming on a sparkling 38 yard scoring hookup between Jarret Synek and leading receiver Braden Kalvelage.

Northwest fought back to square things up at 7 apiece when speedy, tough running quarterback Sam Hartman scooted in for a 4 yard touchdown with :19.2 seconds remaining in the opening stanza.

It looked like Kevin Stein’s Vikings had gained the upper hand midway though the 3rd quarter after Northwest pinned Hastings down deep in the shadows of their own end zone with the wind blowing in the Tigers faces.

That resulted in what would have been a very nice 4th down punt by Hastings Breyer Menke had there been calm winds, but breeze knocked the spiraling boot down at the Hastings 47 yard line, setting Northwest with a short field to begin their drive.

Northwest began the march downfield with a good old smashmouth, running the football with Brady Baasch carrying 4 straight times. Then came a couple of nice pass completions by Hartman, a holding call on Hastings, two Sam Hartman runs inside the red zone and finally a Brady Baasch 5 yard touchdown blast to cap off the 47 yard drive.

Parker Janky suffered a rare PAT miss to give Northwest a 13-7 lead with 6:39 left in the third quarter, but most importantly the Vikings appeared to have the momentum back on their side, which is so critical in a game like this.

But, BIG MO is a fickle friend sometimes you see, and Charlie Shoemaker, the former Cambridge Trojan 1000 yard rusher, knew that.

Just ONE play after the Brady Baasch touchdown gave Northwest the 13-7 lead, Hastings applied a death punch the Vikings never recovered from.

After Parker Janky sailed the kickoff into the Tigers endzone for a touchback (following the Northwest touchdown), Jarrett Synek finally had time to set himself in the pocket, and the senior delivered a perfect strike to speedy Carson Shoemaker, who proceeded to weave his way through the Northwest secondary for an electrifying 80 yard touchdown jaunt.

Ah, it was a thing of beauty, that young Shoemaker’s dash down Viking Field. The pass completion from Synek to Carson covered only about 32 yards, but the Hastings wide receiver put on a twirling, nimble-footed dancing display, making Viking defenders slide off his jersey like water off a duck’s back.

So, just 13 seconds after Northwest seized the lead and BIG MO, both disappeared quicker than you could say “Synek to Shoemaker Shimmying for Six”. And, the Vikings never seemed to fully recover, although they had their chances, just like Hastings did in the first half when the Vikings turned the ball over three times.

The Northwest defense did bounce back to snuff out a Hastings drive at the end of the 3rd quarter, forcing the Tigers to settle for a 25 yard Breyer Menke field goal and a 17-13 lead entering the money quarter.

Speaking of that fourth quarter, Hastings immediately jumped on a scoring opportunity when a Hastings defender recovered a fumble after a Northwest receiver coughed up the football following a nice pass reception at the Vikings 45.

Half a dozen plays later, Jarrett Synek sprinted through the Northwest defense for a 27 yard touchdown run, extending the Tigers lead to 23-13. Hastings forced Northwest to a 3 and out on their ensuing possession and it appeared the Tigers might be the clear with that 10 point advantage with 5:34 remaining in the game, but we all know better when these teams get together.

The never-say-die Northwest defense then returned the favor, forcing Hastings into a three and out as well, but Breyer Menke unleashed a towering punt on a 4th and one at the Northwest 44, sailing into the end zone for a touchback, putting the Vikings in a hole at their 20 to begin a critical drive with 6:35 left in the game.

Talented Viking quarterback Sam Hartman then went to work. Sam fired a 5 yard completion to Riley Anderson, followed by a 10 yard strike to Ryan Williams. But two straight incomplete passes made it 3rd and 10 at Northwest 35.

Then it happened. A Hastings defensive back slipped on the turf, allowing the slippery Riley Anderson to get by for a 60 yard pass reception that probably would have been a score had it not been for another Hastings DB running him down at the Tigers 5 yard line.

The Hastings defense then stiffened, forcing a 4th and goal at the six, but a scrambling Sam Hartman eventually spotted Parker Janky in the right corner of the end zone, nailing the senior with a 6 yard bullet-like touchdown pass.

Austin Nauert blew in to block Janky’s PAT boot, but the Northwest Vikings were right back in this thing, trailing 23-19 with 5:09 left in the 4th quarter.

Hastings needed a long drive to put the game away and they got it. Between Jarrett Synek’s tough running, Zane Weidner’s 12 yard gain and nice 17 yard hookup between Synek and senior Gareth Jones, the Tigers were eventually in business at the Northwest 28 yard line.

The Tigers took a timeout to call a play with 2:22 left. I had a sneaking suspicion what was coming. Jarrett Synek then re-entered the game, took the snap six yards behind the line of scrimmage, waited a few counts as if he were waiting for his receivers to get open, then took off though a huge gap on the left side. Before the Northwest defense could react, Synek sprinted into the end zone from 28 yards out, out-stretching his counterpart Sam Hartman to complete the touchdown run.

Breyer Menke booted the PAT and the Tigers had themselves a 30-19 lead with 2:11 left in the contest.

Of course Northwest drove from their own 33 all the way to the Hastings 16 yard line before Braden Kalvelage pirated a Sam Hartman pass in the Tigers end zone to seal the win. It momentarily looked like the speedy Kalvelage might return the interception for a hundred yard Pick 6, but a Northwest player shoved Braden out of bounds at the Tigers 44.

Jarrett Synek then took a knee twice, completing the Tigers payback for the 49-13 pasting Northwest laid on Hastings in the 2019 regular season finale at Lloyd Wilson Field.

The Hastings offense had their most diversified game of 2020, unofficially piling up 242 yards through the air and 227 yards rushing for 469 total yards. The Northwest offense wasn’t exactly sedentary either, gaining 302 total yards (90 rushing/212 passing).

Jarrett Synek unofficially connected on 13 of 26 passes for 242 yards and a pair of touchdowns. The senior quarterback also rushed the ball 13 times for 99 yards with two TD runs. Leading rusher for the Tigers though, was 5-10, 160 pound senior Zaide Weidner, who rambled for 119 yards on 21 touches, 77 coming in the first half.

Carson Shoemaker led all Tigers receivers, catching three Jarrett Synek passes for 98 yards and a score. Gareth Jones was next with 59 yards on 4 catches, while Braden Kalvenage grabbed a couple for 55 yards and the opening 38 yard touchdown.

For Northwest, slick operating quarterback Sam Hartman put the ball in the air 31 times, completing 18 of those for 212 yards, and a touchdown with two interceptions. Hartman also led the ground game with 72 yards on 18 carries. Brady Baasch was held to 21 yards on 15 carries, but did score on that 5 yard touchdown run.

Baasch was rolling along with 454 rushing yards and 6 TDs after 4 games before suffering an injury which sat the senior out for a month. Brady did return a week ago against Aurora, rushing 16 times for 68 yards and a score.

The Vikings leading receiver was Riley Anderson, who caught 3 passes for 104 yards. Hartman’s favorite however, appeared to be senior Ryan Anderson, who hauled in a monster 9 passes for 59 yards.

Hastings earned a second seed and a home game in next week’s Class B playoffs, facing 15th seeded Omaha Roncalli (3-6). Northwest is set at the #10 seed and will hit the road to face two-time defending state champion, Omaha Skutt.

If Hastings should get by Roncalli and Northwest beats Omaha Skutt, we would see a rematch of Hastings/ Northwest at Viking Field on Friday, November 6th.