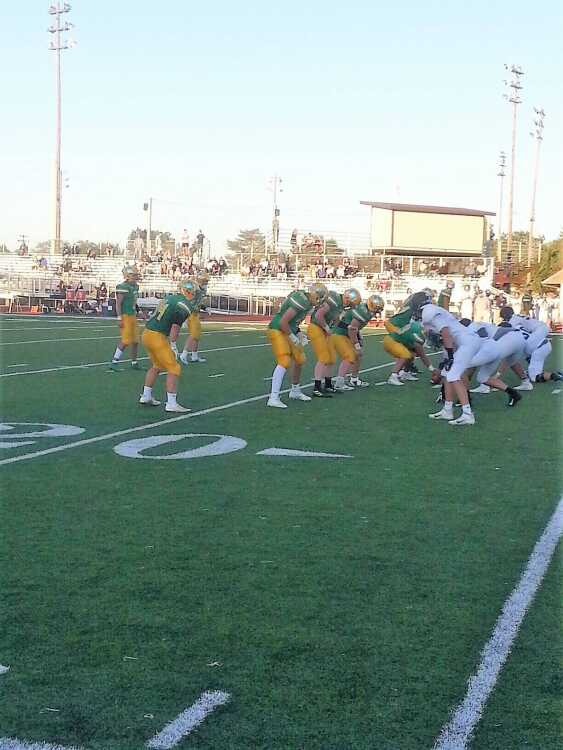 Columbus Scotus QB Evan Bock (far left) waits for the snap during first quarter against Omaha Concordia. Bock would go on to complete his first 9 passes, good for 173 yards and a pair of TDs. Scotus would go on to win the contest by a 61-0 count over the visiting Mustangs.

Linder’s forces left no doubt about the redemption thing, piling on 41 points in the opening stanza, enroute to a resounding 61-0 victory over a stunned Omaha Concordia squad.

Despite the fact Concordia fields just a 27 player roster this season, the Mustangs gave a decent Lincoln Lutheran a good run for their money last week before falling 24-14 to the Warriors.

But tonight, the Omaha Centennial Conference school never knew what hit ‘em. By the time the clock read 6:04 left in the first quarter, All-State wide receiver candidate Garrett Oakley already had three touchdowns in the books.

And the ironic thing about that, is the fact Oakley coughed up the football on the Shamrocks very first play from scrimmage after hauling in a pass from QB Evan Bock. Omaha Concordia pounded on the loose ball, but you know things were going to go well for Scotus when the ball bounced forward 14 yards before the Mustangs recovered the fumble.

The Scotus defense snuffed that ensuing drive to the tune of a 4th and 16 for Concordia following the Oakley fumble and the tone was set for the remainder of the evening, and the Mustangs weren’t going to like it.

By halftime, Scotus had compiled 180 yards passing and 195 yards on the ground and a commanding 47-0 lead. Everything clicked on both sides of the ball for Tyler Linder’s ‘Rocks.

At one point in time during the first half, Scotus quarterback Evan Bock was 9 for 9 passing for 173 yards and 3 touchdowns. Backup QB Trenton Cielocha came in to complete his initial passing attempt, giving the Shamrocks a perfect 10-10 before the sophomore signal caller misfired on a pair of throws.

The ground game also clicked for Scotus in this home opener. By the intermission, junior running back Devon Borchers had already scored a pair of TD runs covering 21 and 12 yards. Classmate Luke Przymus added a sweet 34 yard scoring run around right end, giving the Rocks 4 rushing touchdowns during the first 30 minutes.

Then there’s that Shamrock defense. They was just simply brutal all night long, limiting Concordia to 66 rushing yards for the contest, with 20 of those coming on a late 4th quarter dash by Mustang senior quarterback Nico Orlich.

Orlch did not have much better luck tonight through the airwaves either. Under constant pressure from the relentless Scotus defense, the senior signall caller was able to connect on just 5 of 17 pass attempts for a meager 38 yards, 23 of those coming on consecutive completions to Judah Plummer, a good looking 195 pound senior tight end. Orlich also threw a three interceptions which included a 24 yard Pick 6 by Garrett Oakley.

Luke Pryzmus led the Scotus rushing attack with 66 yards on just 4 carries and a touchdown. Devon Borchers added 48 yards on 6 totes with 3 TDs. Nine other Shamrock running backs touched the ball in the game, combining for 110 yards.

Quarterbacks Evan Bock and Trenton Cielocha combined to complete 14 of 16 passes for 250 yards and 3 touchdowns. Garrett Oakley led all receivers with 5 receptions, good for 121 yards and a pair of scores. Oakley’s classmate Chance Bailey caught 3 passes for 63 yards.

The sophomore connection of QB Trenton Cielocha and Carter Filipi teamed up for the final passing yards of the night for Scotus, a six yard gain and a neat 28 yard touchdown that saw Cielocha scramble, buy some time, then finally spot Filipi, who crashed in for the six.

Columbus Scotus, who improved to 1-1 on the young season, will travel to David City to meet long time archrival Aquinas next Friday. Concordia will continue to search for that initial 2020 win next Friday when the Mustangs host 1-0 Nebraska City.