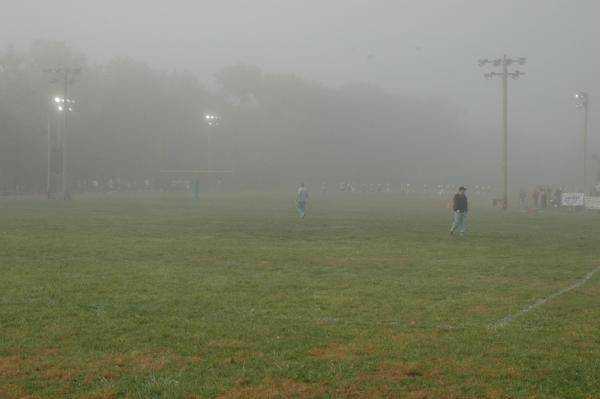 The lethal Gatzemeyer to Buetler pitch/catch duo had touchdown connections of 80 and 9 yards in the opening quarter, another 80 yarder with 3:34 left before halftime, and killer 16 yarder in the money quarter that put the game out of reach at 38-14 with 7:45 to go in the contest. Dylan Buetler ended the night with 6 catches for a monsterous 254 yards. That’s 42 yards a reception folks.

Gatzemeyer also rushed 12 times for 52 yards and a score, while Kobe Lyons led the BRLD ground attack with 81 yards on 18 carries and a 1 yard TD run

Will Gatzemeyer led the Eagles defensive charge with 7 tackles (all solos) and an interception. Lucas Vogt and Derek Peterson each had 5 tackles, and Braxton Bargmann picked off a pair of Cedar Catholic passes.

*Miko Maessner-Kearney - State Class A 100 Meter champion and 1000 yard rusher (2017), did all he could to pace the Bearcats ground attack during their heartbreaking 32-21 loss to old rival Grand Island. The 6-1, 190 pound Princeton commit rushed for 150 yards on 26 carries and a touchdown in the game.

Maessner also returned a kick 30 yards and at some point(s) this season will return at least one kick or punt return to the house. Pretty safe assumption, I would say.

Could this be the son of former Ord Chanticleer 1000 yard rusher Shawn Sich?

*Keithen Stafford, Griffin Hendricks, Alex Thomas-Doniphan-Trumbull - All-District 1000 yard running back opened the 2019 season by rambling for 134 yards on 16 totes and two touchdowns in the Cardinals 58-0 throttling of Wood River. Stafford also had 3 receptions for 72 yards, which included a 46 TD grab.

The game was played in Aurora on the artificial surface because of flooding issues in Doniphan.

Keagen Bosshamer hauled in 4 of Haarberg's aerials for 84 yards and two TDs. Junior Tate Florell led a vicious Stars defense with 10 tackles and I'm wondering if this might be a pretty salty football team? We'll find out Friday when Aurora comes to town.

Linebacker Kole Bordovsky led the vicious Warrior defense with 13 tackles and 2 sacks, while Grant Kolterman recorded six tackles, 4 for losses and 2 sacks. Kolterman also tackled the Wayne punter in the end zone for a safety. And lest we forget, Trev Luben had 5 stops on defense and picked off a Blue Devil pass in the blowout win.

*Jace Connell-South Loup - Rushed for 168 yards on 31 carries and a touchdown, completed 4 of 7 passes for 42 yards and three moreTDS, made 14 tackles on defense and picked off a Sutherland pass in a heartbreaking 38-34 loss to the Sailors. Drew Vickers hauled in all three of Connell’s TD passes.

Myers scooted for 192 yards on 17 carries and 4 touchdowns, including an electrifying 68 yard run. The fleet footed Diaz added 138 yards on 17 touches and scored 3 times in the contest. Serbando’s little bro Mauricio Diaz (just a freshman) scored his first varsity touchdown with a 10 yard dash. He rushed for 38 yards on just 4 carries.

“Dominating” Dominic Sis led the Tiger defense with 10 stops and provided a truckload of openings for Myers and Diaz, who were both 1000 yard rushers a year ago.

*Mason Welch, Brady Sidak-O’Neill - In a game that took two days to complete, it was Welch providing the offensive spark and young Brady Sidak doing his thing on defense.

Welsh, the 6-2, 185 pound junior quarterback, completed 13 of 28 passes for 194 yards and a pair of touchdowns as the Eagles finally put away Boone Central/Newman Grove 20-13 last Saturday afternoon. Michael Poese and Kolby Dean were the recipients of Mason’s 1st half TD passes.

Sidak, just a sophomore, was a monster on defense, as he recorded 12 tackles, recovered a fumble, batted away two passes and blocked a field goal. Hey, Sidak did some damage on offense as well, catching 3 passes for 33 yards and rushing twice for 14 yards.

Sheen was good on 14 of his 26 passing attempts for 161 yards and 4 TDs. Classmate Triston Nicks caught 8 of Gavin’s throws for 110 yards 3 scores. Nicks also ran 24 times for 85 yards and led the Wilcox-Hildreth defense with 13 tackles.

*Carson Borzekofski, Braden Klover-Southern - Talk about efficiency, Southern quarterback Carson Borzekofski came within a gnats eyelash of perfection in the Raiders 54-6 win over Diller-Odell last Friday. The 6-1, 160 pound junior completed 14-17 passes for 165 yards and a pair of touchdowns in the contest.

Borzekofski may have been feeling pretty special after winning a three way battle for the starting QB job at Southern and his opening game stat line certainly showed it.

The Southern ground attack was in good hands with big, powerful Braden Klover (6-2, 210, Sr.) running for 162 yards on 17 carries and 2 TDS, one of those being a 73 yarder. Klover also had 4 tackles, a sack and an interception in the win.

*Chesney Stanczyk-Garden County - Kids, Jason Spady’s teams out there in Oshkosh run the football...and run and run and run. The opening night Eagles 62-20 win over Kimball was no different this year.

Six foot, 170 pound junior Chesney Stanczyk will be the latest addition to Garden’s endless list of 1000 yard rushers and he got his 2019 started by roaring for 257 yards on 20 carries and three TDs.

The Eagles tore Kimball’s defense apart with 416 rushing yards on 47 attempts. Four year starting quarterback Austin Dormann added 73 yards on 14 touches and 2 scores, while junior Cole Coss chipped in with 64 yards on 6 carries and a touchdown.

That Garden County defense, who specializes by swarming to the football, was led by senior Kenny Barringer, who recorded 3 solo stops and 18 assists. Dorman followed with 9 tackles, all assists, and Coach Spady’s son, Reid Spady, another 4 year starter, made half a dozen tackles (4 assists).

I saw Spady and Dorman play as freshman in a playoff game at SEM and these kids can flat out play the game, man.

*Charlie Pugsley, Karl Graflelman-Omaha Brownell-Talbot - It was a rushing explosion for Brownell-Talbot in the Raiders 72-44 basketball score type win over Omaha Christian Academy. Pugsley, the Brownell-Talbot quarterback, ran 9 times for 191 yards and six touchdowns, completed 5 of 6 passes for another 119 big ones and even scored two double extra point conversions on runs.

Running back Karl Graflelman (5-8, 140, Sophomore) carried the mail 15 times for 178 yards and three touchdowns, led the team with 11 tackles and averaged 47 yards a boot on six kick-offs.