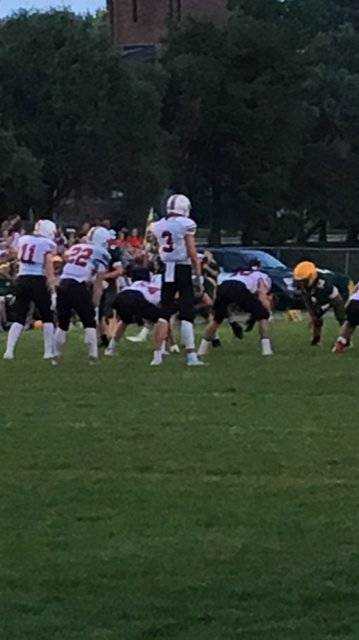 Aurora's sensational QB Baylor Scheierman (#3/white) surveys the Kearney Catholic defense. The Huskie senior would go on to set an All-Class 11-Man record for Most TD Passes in One Game - Eight. *(photo courtesy of Baylor's Mom)

Before we get started, I want to salute three coaches who logged milestone victories last week. High props to Norfolk Catholic’s Jeff Bellar for reaching his 350th career win and Bishop Neumann’s Tim Turman and Doug Goltz of Falls City Sacred Heart for each reaching the magic 300 career win mark.

Three of the very best in Nebraska prep football history right there, friends

*Baylor Scheierman -Aurora - The quarterback with the the quickest trigger finger in the state, put on the finest aerial touchdown show in Nebraska prep football history last Friday night at Kearney Catholic.

Baylor Scheierman set an All-Class 11-Man football record for the most touchdown passes in a single game when he fired 8 TD passes in Aurora’s 60-21 win over Kearney Catholic. The 6-6, 190 pound South Dakota State basketball recruit completed 26 of 44 passes for a monster 517 yards and eight touchdowns in the win.

The Huskie southpaw, who may just have the quickest release of anyone in the state, threw scoring tosses to Jordan Stevenson (20 and 6 yards), Caleb Reichardt (44, 20 yards), Ryan Hunter (54, 6 yards) and Cy Bullerman (57, 36 yards). Bullerman also had a 99 yard kick-return touchdown in the lopsided Aurora victory.

The incredibly mobile Scheierman and his throwing style are a joy to witness. The kid just knows exactly when to release the football. I’m not talking about throwing to a spot either. It’s as if Baylor knows precisely when his receiver is going to make his cut, then targets the throw right on the money to that spot. Just masterful and unreal for a high school quarterback, whose first love is basketball.

As a junior, Baylor passed for 2,424 yards and 28 TDs for a 5-5 Aurora squad. Until the York game, the dude seemed as though he was never touched in that Aurora backfield when attempting a pass. The Huskie 2017 offensive line was simply that good.

This season, Scheierman has had to move around in the pocket a bit more before he pulls the trigger, which showcases his mobility even more.

I can tell you right now that this young man is 1st Team Super-State material, and if the Huskies come up with a running back that approaches the 1000 yard rushing mark, and their defense keeps showing up, it will be difficult for anyone in Class C-1 to deny Aurora a state championship in 2018.

*Brayden Miller, Seth Stroh - Kearney - A little further southwest of Miles Field at Kearney Catholic, Kearney high QB Brayden Miller was putting on a show of his own, Dual-Threat style. The poised and polished 5-11, 190 pound Bearcat field general completed 9 of 14 of his passes for 201 yards and 3 TDs. Miller also added 125 yards rushing on just 8 touches with scoring dashes of 61 and 39 yards in the Kearney’s 49-7 thrashing of Lincoln North Star.

All three of Brayden’s touchdown passes were caught by rangy, 6-3 Seth Stroh. The TD receptions covered 89, 20 and 13 yards.

Brayden Miller is a terrific quarterback folks. Last season during warmups before the Kearney/Creighton Prep regular season game, I glanced at the Bearcat QB’s firing passes to their backs and receivers. I thought to myself “Kanon Koster really looks sharp tonight”. Well, it was not Koster throwing those aerials during pre-game warmups, it was Brayden Miller, and I immediately knew what kind of season the young man had in store for himself in 2018.

*Dylan Kautz - Norfolk Catholic - The literally unstoppable Knights speed demon shook loose for 270 yards and TD runs of 57, 38 and 35 yards in Catholic’s 31-7 win over perennial power David City Aquinas. The incomparable Kautz actually eclipsed the 5000 yard career rushing mark in the opening night loss to Pierce, but I thought it may be nicer to mention it now.

Dylan is already up to 443 ground yards (6 TDs) after two games and is up to 59 career rushing scores. I hope some Division One school gives this amazing athlete a shot at the big time. The kid has worked hard in the weight room and is tougher with his trips up the gut this season.

*Sid deMayo - Elkhorn Mount Michael - 5-11, 175 pound senior sharpshooter put the ball in the air 15 times in a 33-21 victory over Omaha Gross and misfired only once. deMayo ended the night by hitting 14 of 15 passes for 271 yards and 4 TDs in the win. Even after a 6 for 16 performance against Ralston in the season opener (27-32 loss), the Mt. Michael QB still sports a 65% completion average.

Three of Sid’s four scoring passes were handled by Matt Zarybnicky, who had TD receptions of 54, 65 and 5 yards. deMayo can also run out of that EMM pocket, as witnessed by his 5 carries for 75 yards and a 50 yard touchdown dash in this Gross matchup.

*Caleb Francl, Cole Evans - Grand Island - Francl, the slippery 6-0, 170 pound junior RB, carried the ball 12 times for 94 yards and 3 touchdowns in the Islanders come from behind 42-27 win over highly touted Lincoln High. Caleb’s scoring dashes covered 6, 16 and 3 yards. I saw this lad play against Kearney and you feed this lad the football 15-20 times a game and you have yourself a 1000 yard rusher.

*Garrett Snodgrass - York - Yeah, well, just another day at Dad’s office for Garrett. The Husker recruit hit 5 of 11 passes for 126 yards and a pair of touchdown passes (65, 8 yards) to Wyatt Cast. The younger Snodgrass also rushed 9 times for 113 yards with TD runs of 55 and 4 yards in the Dukes 50-28 win over Blair. York had the game well in hand, sprinting to a commanding 35-0 halftime advantage.

*Lane Edis - Mullen - This Mullen Bronco star is going to have scary stats when this 2018 season concludes. In last Friday’s 52-20 win over Anselmo-Merna, Lane blasted for 280 yards on a meager 15 touches. He crossed the goal line four times on long TD runs of 71, 54, 48 and 45 yards. For good measure, Edis returned a punt 56 yards for his 5th touchdown of the night..

The Mullen All-Stater racked up 368 all-purpose yards in the game and had 14 tackles on defense, 10 of which were solos. Lane Edis has now rushed for 490 yards on just 36 carries (13.6/per) and 7 TDs after just two games. He edges ever so close to that coveted 5,000 yard career rushing mark with his current 4,595 yards.

But…...will Lane Edis break his Dad, Wade’s single season rushing mark of 2,728 yards? Pop had 13 games to set the record, including a state championship to pull his record off. That record, by the way, has stood since 1990.

Let’s see. Lane has 490 yards right now. If Mullen would get to Lincoln, that would give him 11 more games to rack up 2,239 more yards, which would break Dad’s record bya single yard. That’s an average of 204 yards an outing, not out of the question for an athlete like Lane Edis.

….. But Lane…...would you really do that to your Dad? How ‘bout a state championship instead. Wade is a great guy, you know, and after all, he is your father.

*Paxton Terry, Cameryn Berry, DJ Gross - McCook - These three gentlemen were instrumental in what many consider the biggest comeback win in the long history of McCook football. Last Friday, McCook was down 21-0, at home, to GI Northwest a few minutes into the 2nd quarter. But the Bison regrouped and scored 35 unanswered points to take a 35-21 win.

Gross was, as usual, was a standout on that Bison “D”, recording seven tackles. McCook will get set to take on defending state Class B champion York on the road next Friday. Stay tuned…..I’m there.

*Clayton Murphy, Cameron Raffaeli - Ogallala - How about that Ogallala aerial attack with 6-4, 180 pound junior Clayton Murphy pulling the trigger, Coach Brent Bauer? All Murphy did in last week’s 20-0 shutout victory over Valentine, was hit 17 of 28 passes for 317 yards and a touchdown. That gives the Indians quarterback 558 yards passing in just two games, plus 5 TDs. The kid can spot his targets too, completing 62% of his 47 throws thus far in 2018.

Remember, Ogallala already has sterling running game with junior Dylon Zink, who ran for over a thousand yards as a sophomore. And what about this Cameron Raffaeli dude!

The 6-0, 200 pound senior will literally tear you apart if you get the ball, and needs little help doing it. Raffaeli had 7 solo tackles in the Valentine game and 9 in the season opener against Holdrege (54-7). Sixteen unassisted tackles after two games? If I’m ball carrier, I avoid Mr. Raffaeli at all costs.

This 2018 Ogallala will have a big time say about who is King of the Hill in Western Nebraska, in Class C-1.

*Connor Pohlmeier - Plattsmouth - Wow! The Blue Devils knock off Beatrice 17-7 and Connor Pohlmeier had a good old time rattling the visiting Orangemen in the process. The 5-7, 140 pound dynamo broke loose for 168 yards on 31 carries and scored both Plattsmouth touchdowns with runs of 16 and 5 yards.

Pohlmeier, who had 928 yards as a sophomore a year ago, scooted for 174 yards a week ago in the Devils 40-29 loss to Blair. At 5-7 and a buck 40, Connor Pohlmeier is often times tough to locate in that Plattsmouth backfield. He is quick off the ball, gets to the opening in a hurry, can plant and cut, and has good speed.

This Pohlmeier lad just may be a three time 1000 yard rusher when it’s all said and done.

*Kirby Hughes - West Point-Beemer - The 5-11, 180 fullback dished out some serious Excedrin headaches in the Cadets 33-13 win over Boys Town. At first glance, it appeared the Cowboys were doing some sloppy tackling, but after further review, it was simply Hughes shedding tackles with his power running.

Kirby ran for 143 yards on just 13 totes and a touchdown last Friday. In just two games, the barrelling Hughes is averaging 16.2 yards a pop, rambling for 276 yards on just 17 carries. Hughes is also a quality defensive back for the Cadets, already making 9 stops and recovering 3 fumbles this season.