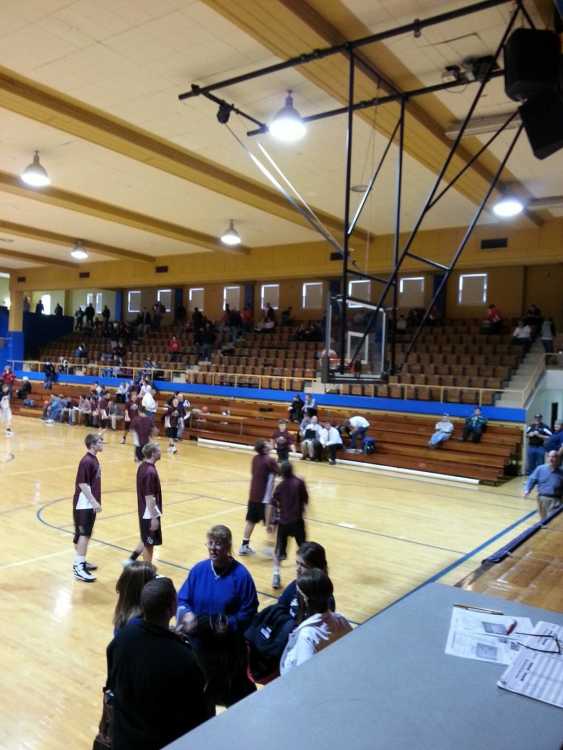 The York City Auditorium, one of the most nostalgic prep basketball venues in the entire state of Nebraska. *(photo by Bobby Mills)

Two highlights that stand out in my mind were Filley winning a State Championship in their final year of existence and Lincoln Northeast coaching legend Rick Collura winning his 4th consecutive Class A basketball title, then calling it a career.

*The tournament scoring leader was no contest, as Filley’s Anthony Harms exploded for a Class D-2 single game scoring record 40 points in that Wildcats title game win over Loomis (71-68). That gave the Filley superstar 98 points in three games (28, 30, 40). A fitting ending for Filley, who would merge with Adams the next season for what we now know as Freeman high school. Harms teammate Shane Ideus was runner-up in tournament scoring, canning 63 points in three games (24, 18, 21). The pair from Filley accounted for 61 of the Wildcats 71 points in that 71-68 win over Loomis in the championship game.

*In the Class D-2 final, Filley rode the dynamic duo of Anthony Harms and Shane Ideus, racing to a 27-15 first quarter lead, but then decided to slow the pace down in the 2nd period. The Wildcats still owned a 43-26 halftime advantage, riding the 21 point scoring of Harms and an 11 additional points from Ideus.

In retrospect, abandoning the quick first quarter pace may have given Loomis a shot of confidence coming out of the intermission break. The Wolves Brian Maaske heated up from beyond the arc, meanwhile Loomis coach Randy Gilson stuck with his man-to-man defense on Harms and Ideus. Loomis then closed the gap to 54-47 after three stanzas. Now enter Jared Booe, who came off the Wolves bench to score 13 points and grab 9 boards, then convert an old fashioned three point play, then add another bucker to close the gap to 54-52 with 6:41 left in the 4th quarter.

Loomis was not going away in this one. State sprint champion Brian Schukar put one through the cylinder to give the Wolves their initial lead of the game at 65-63 with 1:41 left in the game. The teams traded leads and Loomis gained their final tie of the contest when Maaske hit a basket to knot things at 67 apiece with :49.5 left.

Anthony Harms, Ideus and Ryan Lovitt converted on free throws in the final half minute of the game to seal the win in Filley’s final basketball game ever. Harms 40 points led the way for the Wildcats, who pack the uniforms away forever after etching their name the eternal halls of Nebraska prep basketball.

*The D-1 All-Tournament team; State champion Johnson-Brock placed two players on the “dream team”, 6-3 senior Clint Swanson and Kurt Ottemann, a 6-2 junior, made the squad and were both repeaters from last years D1 All-Tournament team. Also named were Rob Gillespie (5-10, Jr) of Shelby, Nate Gustin (6-2, Jr.) of Bancroft-Rosalie and Andy Hahne (6-0, Jr) of Coleridge. Four juniors and a senior….very rare.

*The D-1 Tournament scoring contest was a race between Johnson-Brock teammates Clint Swanson and Kurt Ottemann. The junior Ottemann proved best with his three game total of 64 points (17, 20, 27), improving his scoring output each game and and saving his best for the title game. Swanson was eight points back with 56 points in the tournament (21, 20, 15).

*The D-1 championship game was a story of state tournament experience showing up for Johnson-Brock’s four returning starters. Their opponent, Bancroft-Rosalie came into the finals scoring 189 points in their first two blowout wins over Crawford and Culbertson. But Johnson-Brock, the defending 1997 D-1 champions came out firing on all cylinders, as they ripped Bancroft-Rosalie’s box and one defense to pieces, sprinting to an 18-3 lead.

The Box-and-One “D”, a well intentioned idea by the Panthers to shut down Johnson-Brock’s All-Stater Clint Swanson worked, but the idea must have been tried during the regular season, because the Eagles Kurt Ottemann responded with 29 points. Been there, done that, apparently.

Bancroft-Rosalie was within reach at halftime (29-21), but the Eagles came out for the 3rd quarter just as they had to begin the game, going on an 11-0 run while the Panther’s shooting went ice cold from the field.

Even though the multi-talented Swanson was “held” to 15 points, he sparkled in other areas with 13 rebounds and 5 assists, as Johnson-Brock won their second D-1 title in succession with the 76-49 rout over the high flying Panthers.

*Class C-2 Tournament scoring was a dead heat between Grant’s Derek Lacey (29, 15, 6 points) and West Point CC’s sophomore sensation, Chris Wagner (14, 19, 17 points). Wagner was a shining star in West Point CC’s 49-44 win over Grant in the championship game with 7 of 9 shooting from the field.

In the Class C-2 Championship game, West Point Central Catholic overcame a 21-20 halftime deficit to rally past a good Grant squad, 49-44. Chris Wagner and Jerrod Jasperson combined for 30 of the Bluejays 44 points in the win. Wagner led the way with 17 points while the staunch West Point CC defense was shutting down the Grant shooting game to the tune of 32% from the field, including a 3 for 21 performance from beyond the arc.

Geiger, by the way, hit 16 treys during the 1998 State Tournament. That coincides nicely with his state football career interceptions record of 37 picks. What an athlete.

The C-1 tournament scoring crown went to Milford senior Chad Geiger, who had games of 21, 26 and 21 points to total the C-1 tournament high of 68. Right on his tail was Wahoo’s Ryan Gerdts, who exploded for 33 big ones in the Warriors 57-45 win over Milford in the C-1 title game to total 64 for the tournament.

The C-1 championship game; Wahoo won its eighth championship since 1988 and its second in the past three years when senior Ryan Gerdts feasted on Milford’s man-to-man defense to the tune of 33 points. Gerdts was a deadeye from both the field and the charity stripe in the 57-45 win, connecting on 13 of 17 from the field and 7-10 from the free throw line.

Gerdts asserted himself from the get-go, making 6 of 7 shots for 12 points, as Wahoo sprinted to a 16-4 first quarter lead. Milford canned 5 straight buckets in the second quarter, but the Warriors bounced right back to take a 31-18 lead into the halftime break.

Milford crept back to within 43-37 when Chad Geiger caught fire in the 3rd frame, igniting the Eagles to a 15-3 run. In the end, it was the stifling Wahoo defense that forced the Eagles into a dismal 32% shooting performance from the field (17 of 53) for the game. That included a paltry 6 of 30 from downtown.

Wahoo mixed a variety of zone defenses to slow down the outstanding Chad Geiger, while the Warrior offense was being paced by Gerdts sparkling performance.

*The Class B All-Tournament Team was made up of; Derek Paben (6-7, Jr) and Lucas Baumann (6-0, Jr.) of Beatrice, Jeff Schwartz-Lincoln Pius (6-0, Sr,), Paul Dudley-Hastings (6-5, Sr.) and Omaha Roncalli’s 6-6 senior, Josh Meyer. Paben made the squad in 1997 as a sophomore for Beatrice coach Jim Weeks, one of the best basketball minds in the state.

*The Tournament scoring title went to the astonishing Derek Paben of Beatrice, who had games of 15, 16 and 23 points to nab the title with 54 points. The Pius X Thunderbolts Jeff Schwartz was second with 39 (14, 7, 18 points). Paul Dudley of Hastings was just a point back with 38 points in two appearances (26, 12).

*Beatrice finally broke “the Pius Jinx” in The Class B final. What exactly was that “Pius Jinx”? Well, Beatrice had not beaten the Thunderbolts since 1992 and that included two losses during the 1998 hoops season. But Jim Weeks Orangemen stormed out following the halftime intermission after trailing the second rated Thunderbolts (29-27), to apply a defensive stranglehold on Lincoln Pius X.

After the Thunderbolts Corey Harrington drilled a trey, giving Pius a 32-29 lead just 45 seconds into the third quarter, Beatrice put the defensive clamps on the Pius X shooters, forcing them into 15 consecutive misses, and all 14 of their three point attempts the remainder of the game.

Beatrice certainly didn’t pull away in a hurry, but did make 17 of 21 free throw attempts in the 4th quarter to put away Ray Forycki’s squad, 60-45. Derek Paben nailed 7 of his 12 field goal attempts and went 9-10 from the stripe to lead the Orange in scoring with 23 points. Lucas Baumann chipped in 13 for Jim Weeks 1998 Class B State Champions.

*Tournament scoring honors went to the Benson Bunnies fine post player Lee Cook, who tallied 76 points in a three game stretch (19, 30, 27). The 6-5 senior easily outdistanced Northeast senior John Bell, but Bell had a championship medal to hang on his wall and Cook was left wishing he had one. So goes the heartbreak of a finals loss at the State Tournament. Lee Cook was a extraordinary though.

*The All Class/All-Tournament Team consisted of Mike Hahn and John Bell of Lincoln Northeast, Jon Bowling-Lincoln Southeast, Lee Cook of Omaha Benson, and of course, Anthony Harms of Filley.

*The Class A championship game featured a display of stamina I had never witnessed at a State Tournament before. Lincoln Northeast’s starting five of Mike Hahn, John Bell, Tee Mason, David Mercer and Jerrad Allen never came off the floor during the Rockets 70-64 win over Omaha Benson. Even more mind boggling was the later reported fact that neither Bell or Mercer missed a second of play in all three State Tournament games for Rick Collura’s Northeast juggernaut.

It was a close first half, with Northeast owning a slim 27-25 lead, as Benson’s Lee Cook was scoring 15 of his game high 27 points in the opening two quarters. The Rockets gained their biggest lead of the game at 66-56 with 2:17 left in the 4th, but the Bunnies stormed back to cut the Rockets lead to 66-62 at the 1:31 mark, but Northeast once again came through, as they had all game, to turn back the Bunnies rally.

Tee Mason led Lincoln Northeast with 20 points, including a rare dunk, which left him 1 of 2 for the season.

***It certainly had been a rough stretch for Lincoln NE coach Rick Collura in February. Amon Helmstedter was suspended from the team in the middle of that month following a felony arrest. David Mercer battled mono for three weeks and several other Northeast players were sick during that critical month of basketball. But the legendary Lincoln NE and his well disciplined Northeast team battled through all of the adversity to show why Rick Collura would go down as one of the best in the business.

Incidentally, Rick Collura announced his retirement after the 1998 State Class Championship and will forever be remembered for his pink sweater on the hardwood sidelines.

*The All Class/All-Tournament Team consisted of Mike Hahn and John Bell of Lincoln Northeast, Jon Bowling-Lincoln Southeast, Lee Cook of Omaha Benson, and of course, Anthony Harms of Filley.

*Anthony Harms went on to enjoy a great hoops career at UNK after scoring 2,140 during his illustrious career for Filley. Harms went forward to a great hoops career where he then went on to play from 1998 to 2002. He ranks 10th in career points at UNK with 1,643. He finished as a 41 percent 3-point shooter and is second in UNK records for made 3-pointers in a career with 238, as well as 3-pointers attempted in a career (576). He also ranked in the top 10 at UNK for career steals (156) and assists (352).

At last check, Anthony was a PE teacher at Waverly high school.

*Probably don’t need to tell you Chad Kelsay was a defensive standout for Nebraska, earning 2nd team Football News All-American as a junior for the Huskers. Kelsay went on to play Ten seasons with the Buffalo Bills, retiring in 2013. Last I heard, Chris was Procurement and Compliance Manager at Truck Center Companies in Gretna.

*Jon Bowling went on to play football for the Huskers for four years as a TE. At last report, Jon was a field representative for Stryker Orthopaedics in Lincoln.

Players from 1998 who made the Career lists on the NSAA Records site: