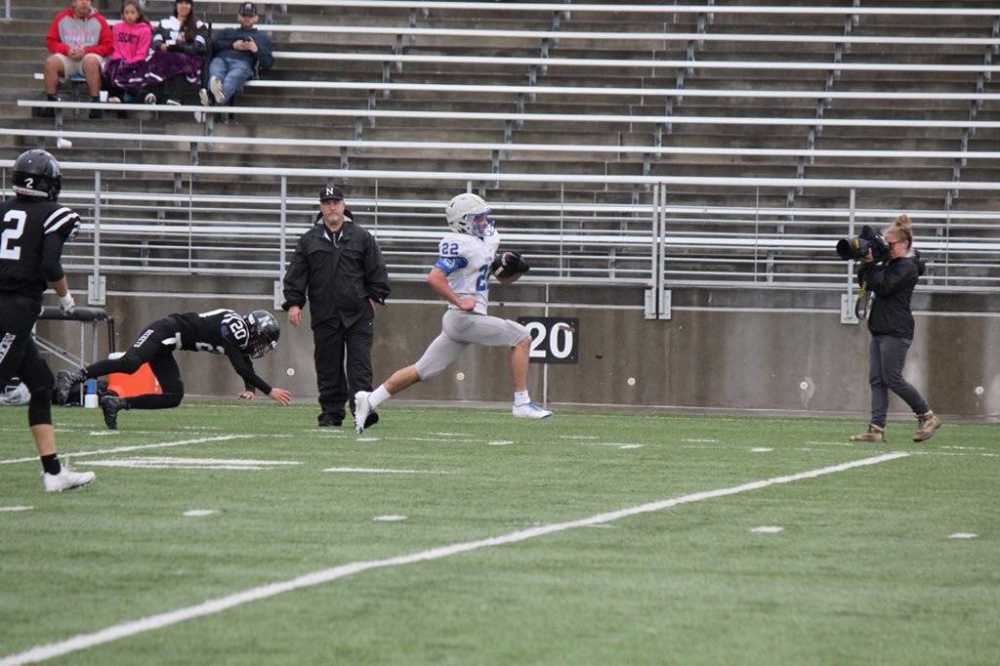 Millard North FB Noah Mick (#22) is off to the races against Lincoln NE. The senior blitzed the Rockets for 280 yards Saturday. *(photo courtesy of Kelly Mick)

Last weekend was a true test of how well a football team was able to handle their ground game when the weather is not conducive to putting the ball in the air . Numerous areas throughout Nebraska experienced rain, many had to play through torrential, driving rains. Some tilts were postponed until Saturday, most of which were in the Eastern part of the state. But the bottom line was this. You’d better have you running shoes on and be able to grind (slosh) it out when conditions like this roll around.

So, if you see anyone on this list who compiled mentionable passing and receiving stats, they deserve it, if they played during the driving rains.

*Noah Mick (FB) - Millard North - The 190 pound battering ram must have had a good night’s sleep on Friday because he was rarin’ to go on Saturday morning in Lincoln.

After the nightcap of the Seacrest Field DH was postponed till Saturday morning, Mick showed up and bolted for 280 yards on 31 carries and 3 touchdowns in the Mustangs 35-19 triumph over Lincoln Northeast. Noah’s TD runs came from 22, 8 and 5 yards out. Mick also recorded 8 tackles on defense (often dodging an official) and was a thorn in the side of Rockets sophomore QB Shadon Shannon all morning.

Noah Mick is a tough customer when he gets a football in his hands. Mick not only runs a 4.5 forty, but benches over 300 pounds and owns a quick burst that gets him through the defensive line in a hurry. The man is nearly impossible to bring down one on one.

With just two regular season games remaining, 3-4 Millard North could use all the Noah Mick that Fred Petito decides to throw at Fremont and Millard South.

That pushes Bailey Darnell over the coveted thousand yard mark with 1,027 yards thus after 7 games. That also places Darnell in some pretty impressive company that have toted the ball for the Bulldogs over the years.

Luke Lundy, Quint Hogrefe, and Steve Cole are legendary Auburn names that Darnell now shares the spotlight with. The last runner to crack the 1000 yard barrier for the “Dogs was Quinn Boden (1,019 yards) in 2014.

That enables Omaha North to hip hop over Bellevue West and take over the Number 1 slot in the recently released Omaha World-Herald Class A ratings. The Vikings and Bellevue West do not meet during the regular season this year.

The fleet-footed Sargbah increased his season rushing total to an unofficial 1,299 yards (15 TDs) while his partner in the Omaha North backfield, Zander Gray, sits at 969 yards and 17 TDs.

Is this duo the best 1-2 backfield punch in the history of Nebraska prep football? Considering the fact that this isn’t a RB/FB combination and the two super backs alternate time in that Viking backfield, it may be difficult and better pair.

*Deshawn Bates (ATH) - Boys Town - In Boys Town’s 34-0 win over Omaha Concordia, the do-everything Bates had 217 yards of total offense and five TDs for the No.4 and 7-0 Cowboys.

Confirmed or not, Deshawn Bates is one of Class B’s most dangerous players. So athletic and a pure nightmare for defensive coordinators, not to mention the defenses themselves.

*Jake Gappa (RB) - Kearney Catholic - I knew it, I knew it and could have told you so after seeing this kid play live just one time. With the horrible weather hovering over Minden’s football facility, the Stars turned to Gappa’s legs and he responded with 249 yards on 26 carries and a couple of touchdowns.

Jake scored twice in Kearney Catholic’s 30-8 win over the Whippets. His scoring runs came from 3 and 32 yards out. Matt Masker scored on an 18 yard run himself and thought he’d better include his WR pal, Brett Kaiser in the box score, so he flipped 14 yard TD pass to the record setting wide-out.

You can figure on the No. 3 Stars to be a major player in the Class C-1 playoffs with Masker at QB and the ever present running threat of Jake Gappa in the backfield.

Kanon only put the ball in the wet, heavy air 5 times, but still completed 4 of those for 65 yards and yes, two touchdowns. Miko Maessner reeled in a 21 yard scoring reception from Koster while Bret Obermiller caught a 15 yard TD strike.

This Friday No. 8 Kearney will host No. 5 Creighton Prep in one of Class A’s finest matchups of the season. Yes, I will be there and beat both teams to the field.

This quintet helped Palmer pulled off something you just do not witness everyday. In a battle of the Tigers, Palmer knocked off then Class D-1, No.5 East Butler, and on the road to boot. Not only that, but Palmer pitched a shutout of East Butler in what folks in the Central Nebraska town referred to as the Mud Bowl.

Despite nearly impossible conditions, especially in the 2nd half, QB Spencer Wichmann still managed to complete 9 of 18 passes for 99 yards and the game’s lone touchdown, a 26 yard scoring pass to sophomore Roy Guzman. But it was Luke Thompson’s stout defense that stole the show. Wichmann and Kunze led the way with 13 tackles each. Samuelson followed with 12, while 200 pound lineman Dominic Donahey plugged up the middle with 11 stops.

This may seem like a shock to most, but you have to realize Palmer head coach Nathan Glause is one of the best 8-Man coaches in the state. His players know the raw fundamentals of of football…...blocking and tackling and do it well, win or lose.

The win improves No. 8 Omaha Westside to 5-2 on the season with regular season games remaining against 2nd rated Bellevue West and unrated Norfolk.

*Bryland Menicucci (RB/PR) - Yutan - Speedy senior rushed for 218 yards on 35 carries to lift the Chieftains to a 28-7 win over Wilber-Clatonia. The big victory by Yutan ended Wilber-Clatonia’s 19 game winning streak.

And the amazing thing about this win? Yutan had played only once in the last 28 days due to two forfeit wins over Humboldt-TRS and Omaha Brownell-Talbot. No rust here.

Playing in only five games thus far because of a forfeit, Zima has still managed to make 44 tackles. Tough hombre.

The five game winning surge has lifted Andy Means forces to the No. 9 spot in this week’s World-Herald Class A ratings.

*Anthony Bruhn (RB) - Clarkson-Leigh - His 196 yards on 20 carries helped the Patriots scored 44 unanswered points in Clarkson-Leigh’s 68-30 win over Elgin/Pope John. Head Coach Jim Clarkson’s Patriots have now won two in a row and 3 of their last 4 games to improve their record to 3-3. Clarkson’s team will meet 2-4 Humphrey/Lindsay Family before closing out the regular season with rival and Class D-1’s No. 4 Howells-Dodge.