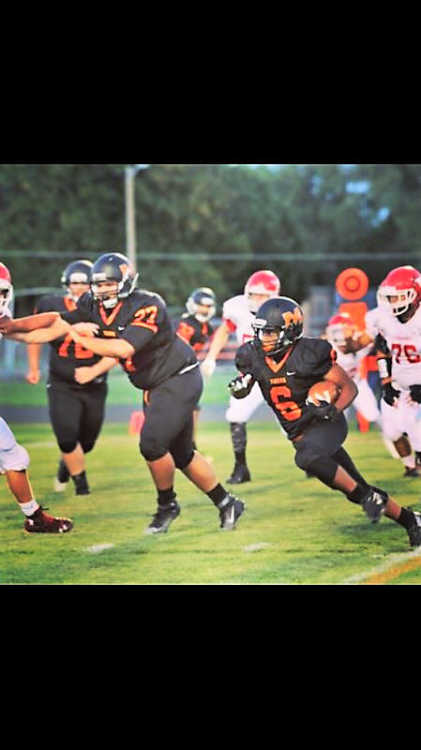 There’s much to talk about this week. Once again, it will take at least two of these babies to salute all the fine performances that took place during Week 2.

*Drake Gilliland - Mitchell (RB) - I’m beginning to think Mr. Gilliland is nearly impossible to hold under 100 yards in any football game. Last Friday the 5-8, 175 pound senior ran for 288 yards on 35 carries and a touchdown in the Tigers heartbreaking two overtime loss to Pine Bluffs, Wyoming. Drake scored both Mitchell touchdowns, one on a 73 yard run, the other coming on an 11 yard pass from sophomore QB Blake Thyne.

Gilliland, who covers the hundred meters in 11 flat, has played in 22 games in his career and rushed for over 100 yards in 15 of those. In fact, Drake has bolted for 200 yards or more in 11 of those contests. He topped the 300 yard mark twice last season. The Tiger star even ran for 178 yards on 39 carries against C-1 semifinalist Kearney Catholic a year ago.

The speedy Mitchell back already has 577 ground yards after two games and leads all 11-Man runners in Nebraska. One of Nebraska prep football’s most exciting runners.

***The unlikely Two-Way Quarterback battle developing in Class A***

*Joe Dolincheck - Bellevue West - What do you for for an encore after setting the Class A single game TD record with 7 scoring passes? Play it again, Sam. Dolincheck repeated his feat from a week ago by throwing another seven TD passes..in the first half..in the Thunderbirds 56-0 win over Bellevue East.

In just two contests, Dolincheck is 43 of 58 passing for 747 yards, 14 touchdowns and no interceptions.

*Cedric Case - Lincoln High - Hey, I know that Joe Dolincheck nearly doubled Cedric Case in passing yards (2,804 to 1880) a year ago, but Case has the upper hand after two weeks this fall. How sweet is it to see Lincoln High opening up eyes around the state after so many years of football sadness?

Case, a junior, has now completed an unimaginable 81% of his passes for 773 yards and 11 TDs, twenty six yards in front of Dolincheck.

*Garrett Snodgrass - York (QB) - Pressed into quarterback service when starter Nick Weskamp was still nursing an injury, the junior standout responded by completing 9 of 13 passed for 212 yards and 2 TDs in the Dukes 59-18 route of Lexington.

Snodgrass didn’t stop there because star RB Simon Otte was also out with an injury. Garrett took up that slack by adding 117 yards on 14 carries and two more scores in the win. The amazing junior had scoring runs that covered 1 and 7 yards. His touchdown receptions were gathered in by Brady Danielson (22 yards) and Tyler Cast (52 yards).

Ben Kowalski led the Dukes ground attack with 91 yards on 7 tries as York set a school record for total offense with 587 yards in the Lexington contest.

You didn’t think Garrett Snodgrass was finished adding to his stat line did you? Noooo. He also made 7 tackles on defense and blocked 2 kicks.

The 210 pound son of York super coach Glen Snodgrass was a man among boys playing freshman ball for the Dukes……….at Quarterback, so the passing thing was not a huge surprise. Truth is, Glen’s boy is just simply a terrific athlete, and only a junior.

*Brody Belt (RB), Giavonni Guido (QB) - Millard West - The backfield duo accounted for 411 of the Wildcats 495 rushing yards in Millard West’s 49-16 victory over Millard North. Belt, who rushed for 1,327 yards and 21 TDs a year ago, rushed 12 times for 207 yards and 4 scores in last Fridays big win. The speedy Guido wasn’t far off Belt’s pace with 204 yards on only 7 carries and 3 touchdowns.

Brody Belt hit paydirt from 2, 11, 1 and 40 yards away, while Giavonni scored on a 1 yard sneak, then ripped off long distance scoring jaunts of 83 and 64 yards.

Belt, who would have been an All-State selection year ago had it not been for a deep, talented running back pool, has toted the ball only 23 times this fall, yet rushed for 359 yards and 7 TDs. That’s 15.6 yards a touch folks.

Guido has the same exact 359 rushing yards after 2 games, but has carried the football only 19 times for 6 scores. That’s 18.9 yards a touch. Looks like Fantasy stats doesn’t it?

*Adam Wasserman (QB), Jacob Johnson (RB) - Fairbury - Two Jeffs standouts were at it again in the Fairbury 48-6 thumping of Syracuse. Wasserman hit 10-12 passes for 176 yards and 2 scores, rushed 9 times for 80 yards and 3 more TDs, accounting for 5 total touchdowns. Johnson carried 16 times for 172 yards and sprinted 44 yards to paydirt in the game. Jacob also caught one of his buddy’s passes for 38 yards and scooped up a Syracuse fumble and took it to the house from 71 yards out.

The All-State Johnson made 8 tackles on defense, 5 of which were solos and one for a loss. Wasserman chipped in 3 stops. Oh yeah, Adam Wasserman also booted 6 of 7 PATS while also doing all the punting and kicking offs.

On the way home, Wasserman also drove the bus, while Jacob rode in a food truck being towed behind, making tacos for the team. Well, that’s what I was told anyway.

*Carter Terry (QB) - GI Northwest - Junior gunner unofficially completed 15 of 28 tosses for 282 yards and 6 touchdowns in the Vikings 56-0 blasting of Alliance in the Vikings home opener. Terry shook off an interception on his first attempt of the night and went on to connect with 4 different receivers who crossed the goal line Friday night.

Riley Schliep had TD receptions of 56, 15 yards, Brady Glause also grabbed 2 scoring tosses from Terry (10, 11 yards), Danny Fisher caught a 12 yarder and Jarod Fox reeled in a 26 yard TD reception to round out the aerial scoring.

Following a rookie sophomore campaign that saw Carter Terry pass for 2,288 yards and 23 touchdowns, the flashy junior is off and running in 2017. Carter has hit on 33 of 51 throws for 596 yards, 11 TDs and has suffered only one INT.

This young man may just pass his way into Northwest’s record book before he calls it a career at GINW.

Oh yes, Justin Davis, who ran for 705 yards and 10 touchdowns before being injured a year ago, has already rushed for 352 and 3 scores in two outings this fall. Also made 10 stops on defense. I like this kid’s grit.

*Gretna Defense - Second week in a row in these blogs for this group of offense stuffers. Crete was the Dragon’s victim last Friday. The Cardinals could muster only 91 yards of total offense as Gretna frolicked with 475 yards of their own in the Dragon’s 37-7 win.

The Gretna rushing attack pierced the Crete “D” for 351 yards, led by senior Tanner Tierney, who ran for 205 yards on 29 carries and 2 scores. Quarterbacks Quinn Mason and Tobias Tostenson combined for a 9-11, 124 yard passing performance with 2 TDs.

This Gretna defense is putting up some serious numbers, man. Already 14 tackles for losses, 5 sacks, and one interception. But much of it takes place within 3 yards of the scrimmage line. Players like rugged LB Joey Johnson (16 tackles) Connor Fee (15 stops) and Caloway Soucek (12 stops) are just a portion of the Gretna defensive machine. Just so many contribute for this unit.

Does anyone have October 20th circled when Elkhorn South comes to Gretna in the regular season finale? Something has to give there, and the two teams could very well meet in the playoffs. Oh lord.

*Bryce Kitrell (RB/WR) #25 - Ashland-Greenwood - Just when you thought the Kitrell brood ran out of athletes. More bad news, Bubba, this one’s a sophomore. The 6-0, 175 pound Kitrell turned big time running back in last weeks 43-20 win over Falls City. He toted the ball only 12 times Friday but managed to gauge the Tigers for 247 yards on the ground and 4 touchdowns.

Kitrell scored on short runs of 3 and 6 yards in the opening quarter, then exploded for long TD jaunts of 76 and 80 yards in the 2nd and 3rd stanzas respectively. The talented sophomore also caught a 36 yard pass and made 9 tackles on defense, plus making a fumble recovery that he returned 20 yards.

Kitrell played extensively on defense for A/G a year ago as a freshman, but unfortunately suffered a broken collarbone, ending his season after four games. Bryce, however, was good enough to record 14 tackles despite the season ending injury.

Keep an eye on this young talent.

**Last Friday night’s Arcadia/Loup City-Valentine game left me in a daze. The mind-boggling defense by both C-2 teams was a sight to behold in Arcadia that night. The highly anticipated battle between 1000 yard rushers Tige Calleroz of Arcadia/Loup City and Valentine’s big Wyatt Hitchcock never developed.

So intense was the play of both defenses, Calleroz ended up with only 37 yards on 21 carries, and that included a 25 yard touchdown run, while Hitchcock could only muster 19 yards on 13 totes.

Multiple defenders just swarmed to each of these outstanding runners the instant they received the handoff. And the explosive sound of those crunches by the defensive bandits just sent shivers up my spine. The offensive lines never had a shot when either Hitchcock or Calleroz touched the ball despite the fact both teams had very good O-Lines coming into the meeting.

This is the finest display of defensive football I’ve witnessed by both teams in 5 years, and keep in mind I’ve seen teams like Millard North, Omaha North, Gretna, McCook and Elkhorn South during that span. And what does this prove? Something all football coaches know. Without offensive line blocking, not even the best running back on the planet gets any yards…...period, at any level of football.