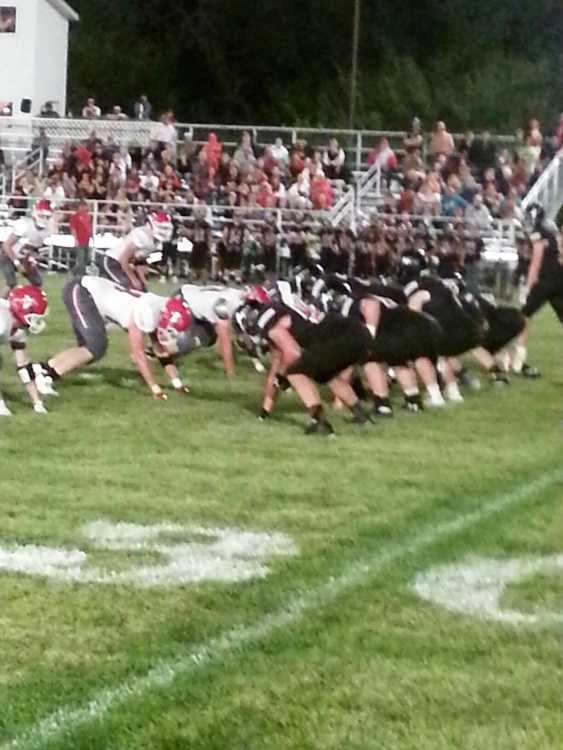 They say big time players come up big in big time games. And on this night, Tige Calleroz did just that.

After being held to 13 yards on 17 carries through 3 quarters, the Arcadia/Loup City star performed his magic in the form of a beautiful cutback 24 yard touchdown run with just 4:38 left in the game.

It was a classic matchup between two Class C-2 powers, although Arcadia/Loup City was unrated coming into the game against 4th rated Valentine. Both defenses were absolutely outstanding on this gorgeous night for football in Arcadia. The anticipated head to head matchup between 1000 yard rushers Tige Calleroz and Valentines Wyatt Hitchcock never developed, thanks to vicious defensive play by both squads.

After a scoreless first quarter, thanks to the solid play of both defensive lines and punters, Valentine drew first blood in the game when top notch senior quarterback Jordan Kelber found WR Kyle Grooms for a 4 yard touchdown. The Badgers drive started in Rebel territory at the 41, but a holding call right off the bat put the ball back on the Valentine 44.

The Rebels answered on a well constructed, efficient drive that began on the Arcadia/LC 26 yard line. With just 2:37 left in the half, senior QB Macrae Maschka directed the 74 drive, capped off by his own 5 yard touchdown with just 2 seconds left in the 2nd quarter.

The key play in the drive was a 36 yard pass to 135 pound senior Nolan Baker, who made some nifty moves along the way, enroute to 68 yard receiving night.

The defenses would again take over in the 2nd half, stuffing the run games and big 3rd down plays for a quarter and a half. The Tige Calleroz scoring run and the Maschka double PAT run looked it might be enough for Arcadia/Loup City with 4:38 left in the game.

Valentine had other ideas. It took less than 30 seconds for the Badgers to answer the Rebels touchdown. Working on a short 51 yard field, all it took was a 13 yard scramble by Jordan Kelber, a 15 yard roughing the passer call, and a pinpoint 23 yard scoring pass from Kelber to senior Dylan Lurz. Kelber nailed junior Devon Osnes with the 2 point conversion pass and suddenly the Badgers were within 16-14 with time to come back.

All Valentine needed after that was a defensive stop and Arcadia/Loup City nearly snuffed that plan on their next possession until the Badgers forced a punt, thanks to the defensive front 4 play of Brayden Fowler, 6-8 senior, Kooper Reece, Gus Harvey and Josh Bachlor.

The Rebel punter then launched a howitzer of a boot that carried all the way to the Valentine 29. Now Kelber and senior RB Wyatt Hitchcock went to work with 48 seconds left. First, the two connected for a 19 yard gain, then a huge 31 yard hookup.

Now Valentine is nearly in the Rebel red zone. Kelber then finds fullback Dj Stephen inside the 30, but a 15 yard penalty on the Badgers pushes the ball back to the Rebel 41 yard line.

1st and 10 for Valentine with 17 ticks left. Kelber is flushed out of the pocket and eventually coughs up the football at the Arcadia/Loup City 44. The Rebels take over, Maschka takes a knee and Arcadia/Loup City hangs on to claim the hard fought 16-14 win.

Both quarterbacks had good passing nights. Arcadia/Loup City QB Macrae Maschka ended up completing 10-15 throws for 113 yards with just one interception. Kelber was 15 of 22 for 178 yards and a couple of touchdowns and two interceptions.

The Rebel defense held Valentine to just 42 yards on the ground, while Arcadia/Loup City could manage only 88 rushing yards, led by Tige Calleroz 37 yards on 21 carries and a score.