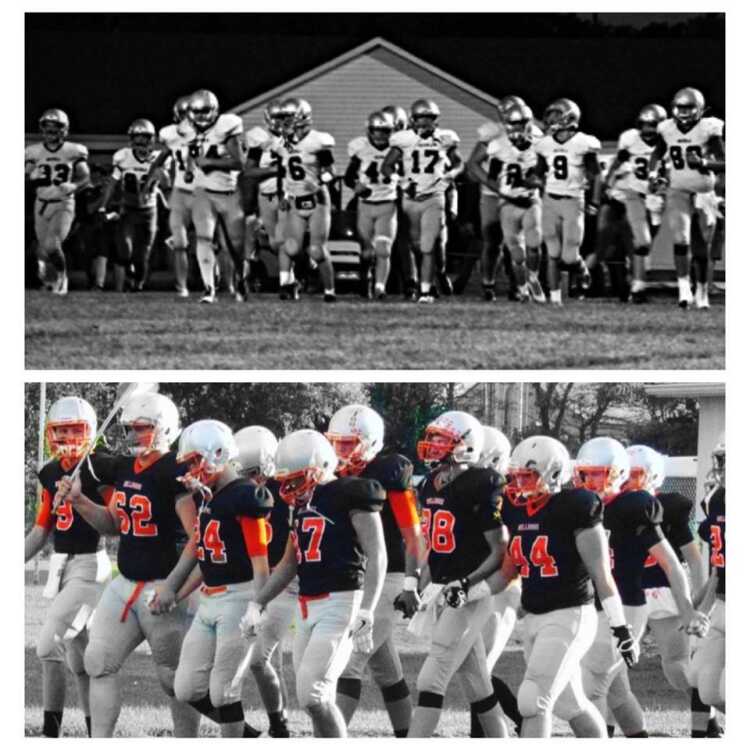 This Osceola football team is on a roll.

Caden Theis and the Osceola "D" - Coach TJ Nielsen's Osceola football team took a trip to up to the Magic Circle, landing at the "Hollywood Bowl", otherwise known as Humphrey St. Francis home football field down in that scenic indenture up in God's Country North. Artificial turf, new track surface, the works.

Do you suppose Caden and the boys knew that the last time these Flyers lost a home game was the 2013 season opener to Fullerton? And before that, rival Howells in the 2011 season closer?

Teams just do not beat the mighty Flyers at home. Ain't no such thing. Lick your wounds, climb back up the hill and hit the road Jack. Better luck next time, nice havin' ya.

Y'all come back sometime, hea?

Well, junior Caden Theis and the Bulldogs had other ideas last Friday. Coach Nielsen's 2016 Osceola team has no stars, everyone contributes. But on this night Theis, the junior field general, may have decided he could take on a bit more responsibility.

All Caden Theis did was complete 7 of 8 passes for 121 yards and a TD and tote the ball 32 times for 136 yards and three more scores. His scoring jaunts came on runs of 17, 4, and 2 yards out, the latter being the game winner.

Theis also made 11 tackles and was only the 4th leading tackler on the night.

Seniors Krayton Grabel and Peyton Watts each had 12, along with junior Brennan Bryan who had 11, as Osceola pulled off the 26-24 win over the #1 St. Francis Flyers.

Osceola, who was mysteriously not rated prior to the big win, vaulted up to #5 in the Omaha World-Herald Class D-2 ratings today. HSF dropped to one slot below the Bulldogs.

Now I don not have to continuously tell you to watch this Osceola football team come playoff time.

*Mark Zeckser-Doniphan-Trumbull - The Southern Valley football field is still scorched from Zeckser's visit last Friday night. I heard the Oxford fire department had to be summoned to put out the fiery footprints left by the Cardinal speedster.

Zeckser exploded for 432 yards on 26 carries, and hit the end zone 4 times in the romp. I'll do the math again. That would be 16.6 yards a touch for Zeckser. That's 670 yards the past two weeks for the former Adams Central RB.

'Spose running against those Class B defenses a year ago helped Zeckser. If you recall, he did have a 1000 yards in 2015.

The 432 yard outburst vaults Mark Zeckser to the top of the 11-Man Rushing Leaders list with 1,406 yards. Nothing new at Doniphan-Trumbull, they've had dudes like this before.

*Adam Wasserman, Jacob Johnson, Zach Reikofski-Fairbury - The 1-2 running punch of QB Wasserman and RB Johnson was too much for Southern, as the Jeffs ran to a 46-0 halftime lead, enroute to a 52-14 win.

The 6-0, 180 pound junior terror had a monster 4 sacks, 2 tackles for losses, 6 total stops.. And that's not counting the disruption the dude caused all night for the Southern offense.

This Fairbury football team is one point away from being undefeated, with it's only blemish being a 14-13 setback to Falls City. The Jeffs are at the top of their District and could very well finish the regular season at 8-1.

*Garris Karr-Arlington - Karr let Ft. Calhoun know what they were in for on the 2nd play from scrimmage. The 6-2, 175 pound senior broke loose for a 60 yard touchdown as Arlington never looked back in a 34-7 win over the Pioneers.

Karr ended the evening with 187 yards on 30 carries and 4 touchdowns. Garris also had 2 sacks and 9 total tackles in the game.

The big rushing game elevated Karr's 7 game total to 1,096 yards (18 TDs) Garris Karr has been held under a 100 yards only once this year and that coming in the opener against West Point-Beemer, when he only got the ball 7 times.

The following week in a 62-8 thumping of Madison, Karr again had only 7 touches, but rambled for 101 yards and 3 TDs. Since that time, the coaching staff has made certain Mr. Karr gets the pig around 23 times a game.

You know something about this young man? He was not a starter until the final 4 games of the season a year ago, yet ran for 561 yards and 10 touchdowns. I knew the kid was going to be something right then and there. I have a hunch my friend Bob Jensen knew the same thing.

*Derek Riege-Nebraska City - 6-1, 190 quarterback had a 2nd quarter he'll never forget in the Pioneers 46-14 win over Platteview. On the other hand, I know that Platteview's football team would just as soon forget it.

With Nebraska City up 8-0 entering the 2nd quarter, Riege suddenly found big openings in the Platteview defense, braking loose for long distance touchdown jaunts of 63, 48, and 40 yards. The 8-0 lead ballooned to 30-7 at the half and the Pioneers were on their way to victory number 2 in their last 3 games.

Derek Riege finished his dream game with 202 yards on 15 carries and 3 TDs. He was on target with his arm too, hitting 5 of 8 passes for 116 yards and a score. The senior leader also led Neb. City on defense with 9 tackles.

Throw in his 57 tackles on defense, of which 40 were solos, you have quite a well rounded football player.

*Ryan Moritz to Christian Banker-Omaha Skutt - The most feared pass/catch combination in Class B, I'm thinking. In the SkyHawks 38-3 win over Omaha Roncalli, Moritz hit 14 of 23 passes for 197 yards and TD. Six of those aerials were received by Banker for 82 yards. And yes, Christian Banker had the lone scoring reception (16 yards).

Moritz can also hurt you if he decides to keep the ball, and Roncalli found out the hard way when Ryan escaped for a 72 yard touchdown run.

For the season, Ryan Moritz is a deadeye sharpshooter, hitting 61% of his 129 attempts for 1,310 yards thus far in 2016.. These are not short passes either. And Christian Banker....oh good God, what a pair of hands and sweet, dancing feet!

Banker already has 601 yards receiving on 31 catches and 6 touchdowns. Ah yes, the man with the Golden Spikes. You know I love those shoes man. They looked good in Columbus. By the way, Christian accounts for 46% of Skutt's receiving yardage, and that's probably just fine with Matt Turman.

*Noah Valasek-Riverside - I think this young man is, without a doubt, the finest athlete in 6-Man football. In the Chargers 70-33 win over No.2 St. Edward, Valasek completed 12 of 17 passes for 132 yards and rushed 6 times for another 132 big ones.

St. Ed actually pulled to within 41-33 before Riverside turned on the jets to finish it. That is by far the closest any team has come to the Chargers in 2 years at any point in a football game.

An All-State football and basketball player, in addition to being a terrific baseball star for Albion in the summertime, Valasek is the dream of every coach in the state with his unending quest to make himself a better athlete.

Noah Valasek know nothing but 110% on and off the practice field, let alone on the game time surface. This young man, like Austin Stuhr of Heartland, could start for any Class A football team in Nebraska.

*Branden Bardell-Maxwell - Story time. Let's say you are a 205 pound fullback who had 11 carries the entire season a year ago. You have a quarterback (Will Huffman) who started the season with rushing games of 129, 147, 224 and 314 yards and 12 TDs. Also in the backfield is a returning FB by the name of Garrett Schledewitz, who is a mean, rugged running motor scooter.

Schledewitz has already run for 444 yards and 4 touchdowns. And there you are, Branden Bardell, that has all of 19 carries for 103 yards this 2016 season.

Apparently both Huffman and Schledewitz went down in the Eustis-Farnam game on September 16th and were not available for the Stapleton game 2 weeks ago. Stapleton is 1-4 and getting blitzed by everyone, but without Huffman and Schedewitz on defense (69 tackles combined) things got a little testy.

Check this out. Branden Bardell, who has toted the ball 30 times in his life, gets the ball 55 times and runs for 290 yards in that Stapleton game. Yeah, Maxwell loses 80-53 to Stapleton, but Bardell scores 3 TDs and catches a scoring pass to boot.. The senior also made 9 tackles on defense and posted 2 stops behind the scrimmage line.

639 yards rushing yards in 2 games for Branden Bardell........Not too shabby considering the facts!

*Jordan Janssen, Jaden Johnson-Columbus Lakeview - Janssen and Johnson. Sounds like a law firm doesn't it? Well, these two fellows did lay down the law in the Vikings 42-28 win at GICC last Friday.

Janssen ripped a good Crusader run defense for 186 yards on only 19 totes, scoring twice on runs of 75 and 5 yards. Johnson rushed 11 times for 70 yards, but scored 2 important 4th quarter touchdowns to put it away for Lakeview.

In addition to a 1 yard TD run in the first quarter, Johnson added those critical 4th stanza TD runs of 19 and 20 yards.

*Battle Creek Offense - Holy Moly Guacamole, Lutheran High Northeast never knew what hit them last week. I heard through the grapevine that Battle Creek head coach Andrew Carlson told his team things were coming together for his Braves and beginning to fall into a groove. Boy, he wasn't just whistling Dixie, was he?

The Braves tore through a good LHNE team enroute to an impressive 49-6 win. Battle Creek hardy put the ball in the air either.

The Braves ran the ball on 53 of their 58 total scrimmage plays, with Wyatt Hamer and Weston Johnson leading the way. Hamer ran for 105 yards on 22 carries, scoring on runs of 8, 13 yards. Johnson chipped in 88 yards on 24 tries, and hit paydirt with a 3 yard blast.

QB Josh Schick passed only 5 times in the Lutheran High NE game, but completed every last one of them for a huge 162 yards and 2 TDs. Stone Kraft did a crafty job of catching the football too, pulling in 3 receptions, two for touchdowns (27, 71 yards).

*Tori Huffman-Burwell - Ran for 256 yards on 21 carries and 3 TDs in the Longhorns 55-12 win over Clearwater/Orchard. That raises Tori's season rushing total to 872 yards with 13 touchdowns.

That Burwell defense was really stingy too, allowing only 130 yards of total offense and a minus 6 yards rushing in the deal.

The 'Horns are looking good in the D-1 playoff picture, sitting at 4-2 with a 2-1 mark in District play. They have district games with Ainsworth and Boyd County remaining in the regular season.

*Colton Engle-Humphrey St. Francis - Another gentleman that will get his yards, win or lose. In that loss to Osceola, Engle ran for 149 yards on 32 carries and scored on short runs of 1 and 3 yards.

The St. Frans product increased his season ground total to 760. Don't worry about Engel getting his 1000 yards. The Flyers may have half a dozen games remaining this fall. That, my friends, is a very good assumption. Just what they do up there for Coach Eric Keeeler.................every year in football.

*Jacob Tracy-Gibbon - I'll be darned if Tracy didn't do it again. After exploding for a school record 381 yards and 5 TDs against Sandy Creek last week and 193 the week prior to that against Southern Valley, the 5-9, 170 pound junior apparently wanted to keep his streak of 100+ rushing games in tact.

Tracy ran for 177 yards and 18 carries and 4 touchdowns in the Buffaloes 49-8 win over Wood River.

That would be 751 yards and 9 TDs the past three weeks for the multi-talented Jacob Tracy. His 7 game rushing total.....905 yards.

Coach Mark McLaughlin's Gibbon crew have a couple of tough assignments to close out the regular season in Doniphan-Trumbull and Hastings St. Cecilia. Stay tuned.