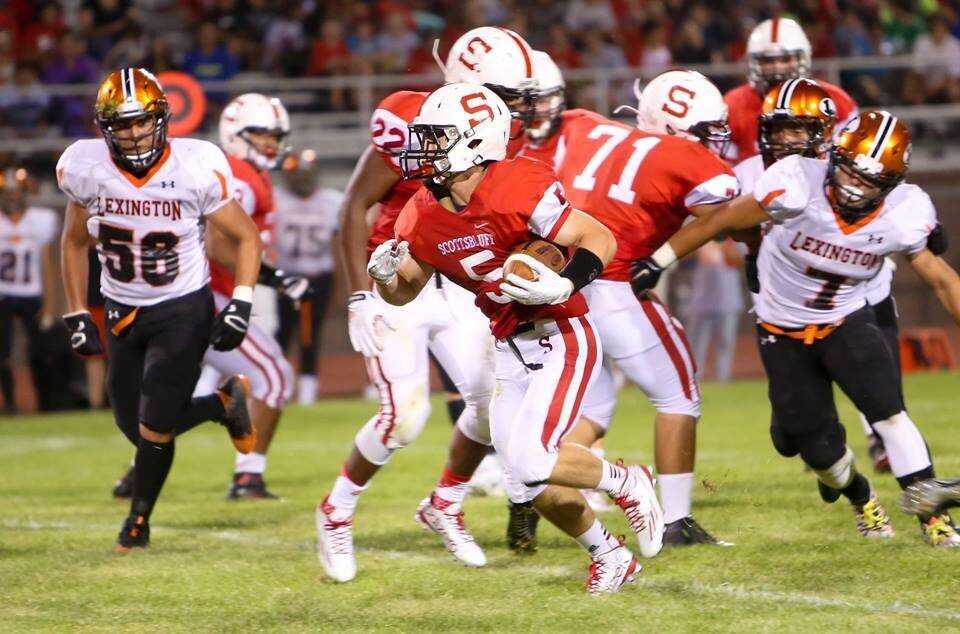 Scottsbluff RB Max Mason (#5) displays some sweet moves against Lexington a year ago.

It seemed like every time Aurora's offense had a little momentum going their way on homecoming night, the ballhawking Scottsbluff defense was there to squash the drive.

A pick-6 by a freshman and three drives halted inside the Bearcat 25, all in the second quarter, were too much for Aurora as Scottsbluff came away with a 28-13 win on a picture perfect night for football.

The visiting 'Cats, who came into the contest with 732 rushing yards and NO passing yards, did attempt 7 passes on the night and completed only one.....a dandy 35 yarder from junior QB Noah Bruner to Max Mason....good for Scottsbluff's opening score.

One pass in 4 weeks and it's good for a touchdown. That's just how the night seemed to go for the opportunistic Bearcats, who improve to 4-0 on the season.

After Scottsbluff scored with 2:18 left in the first, Aurora took their 2nd possession of the game and appeared ready to respond. The Huskies began the drive on their own 31 and promptly moved to the Bearcat 30 as the 2nd stanza began. Disaster followed.

All-State candidate Preston Dibbern, who was suspended for the 1st quarter for disciplinary reasons, appeared in position to haul in a flare pass, but Scottsbluff's Jasiya DeOllos had other ideas.

The 5-11, 180 pound Freshman literally snatched the ball out of Dibbern's grasp and had clear sailing 70 yards to the end zone. Josh Moore added his 2nd PAT boot and Scottsbluff had a 14-0 lead just 12 seconds into that 2nd quarter.

Aurora would be inside the Scottsbluff red zone twice more before halftime, only to have the Cats turn them away. The first one came on a sweet pass breakup by Josh Moore in the end zone, the other coming after the Huskies advanced to the ball to the Bearcat 5.

That Aurora scoring opportunity was dashed when quarterback Carter Thompson dropped a low center snap, recovered it, and took off to his left only to be run down by the 5-6, 150 pound Mason, who was playing defensive rush end at the time.

Aurora did make things interesting in the 2nd half. The offensive line started to get a better push which led to a Preston Dibbern 10 yard touchdown run with 5:54 left in the 3rd quarter.

The next drive though, was probably the most impressive Aurora possession of the night.

Starting at their own 33, senior QB Carter Thompson engineered a well orchestrated 67 yard journey, buoyed by an opposite hand/ left handed completion to senior Alex Kubik, carrying from the 30 yard line to the Scottsbluff 15.

The drive culminated with Thompson's 1 yard scoring plunge, but Kubik's PAT sailed right and Scottsbluff still had a 14-13 lead heading into the 4th quarter.

The Bearcats offense, who had been stopped in the 3rd quarter, caught fire to open the 4th stanza when Bo Lofink shook loose for a 34 yard run. Aurora appeared to have the drive stopped when Scottsbluff faced a 4th and 1 at the Huskie 17. But in crunch time you feed Max Mason the ball and let the O-Line do its thing.

Mason took the 4th down handoff, charged into the right side of that Bearcat line, appeared to be stopped by a host of Huskies, then suddenly shot out of the pile for a slick 17 yard TD blast. The Mason touchdown gave the Bearcats some breathing room at 21-13 with 11:16 left in the game.

Aurora, finally gaining some momentum, drove the ball all the way to the Bearcat 20 before Lofink picked off a Carter Thompson pass at the Bearcat 2 yard line.

The Huskie defense did a terrific job on the ensuing Scottsbluff possession, forcing a short punt that landed at midfield. Aurora was in business with 4:26 left in the game trailing only 21-13 and heaven knows, the Huskies have done the comeback thing countless times through the years.

Aurora's shot to take it downfield was severely hampered when Huskie QB Carter Thompson, under a fierce pass rush, sailed his pass out of bounds and was flagged for intentional grounding. Incomplete pass, loss of down.

After a third down pass fell incomplete, Aurora was forced into a punting situation, but freshman Jasiya DeOllos charged through and tackled the Aurora punter, giving Scottsbluff the ball at the Huskie 30.

Max Mason then scored his 3rd touchdown of the game on a 7 yard run with 1:01 left to ice the win for Scottsbluff.

The fantastic running Max Mason, all 150 pounds of him, led all rushers with 130 yards on 26 carries Mason, who entered the contest as Class B's leading rusher, now has 849 yards after 4 games.

Preston Dibbern led the Aurora on the ground with 74 yards on 12 carries and a TD.

The game was frustrating to Aurora because of missed opportunities, but had to sting worse when they looked at the total yardage numbers.

#7 rated Scottsbluff moves to 4-0 on the season and will face GI Northwest next Friday before heading to McCook to face a very good Bison squad in two weeks.

#5 Aurora heads out to the Bearcat neck of the woods next Friday to face Gering, who is in the midst of a 30+ game losing streak.