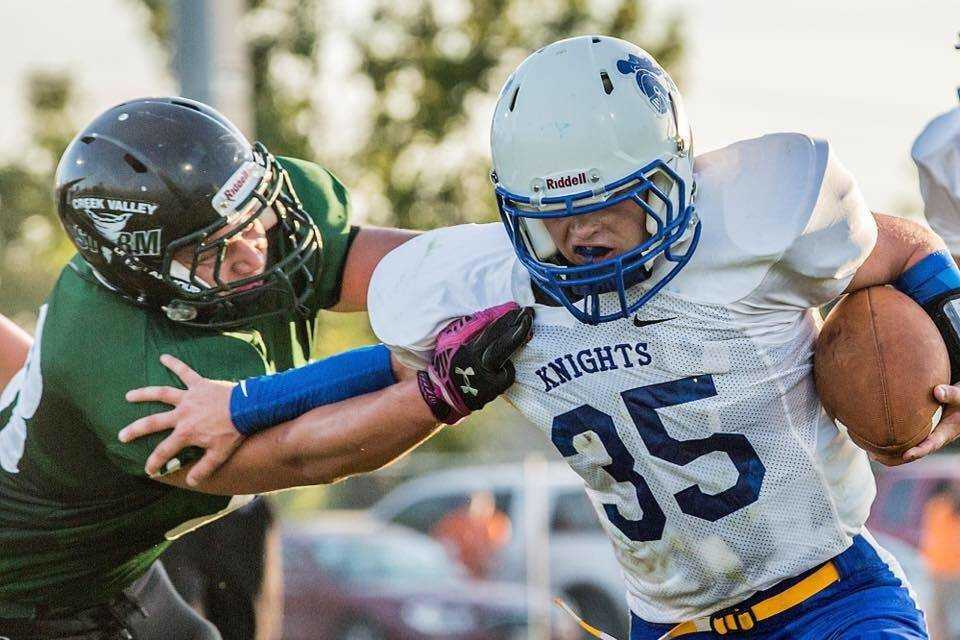 *Maverick Sukstorf-Cedar Bluffs - 6-2, 200 pound quarterback did his part to keep Cedar Bluffs in their game against Nebraska City Lourdes. Despite losing the contest 78-48, Maverick launched 61 passes, completing 35 of those for a gigantic 440 yards and 4 touchdowns. Sukstorf scored on a 1 yard run himself in the game, but still came up 30 points short. That's a ton of passes for a ton of yards, but it's tough when you run into a Lourdes team that features a back named Kyle Francois.

*Henry Flott-Omaha Westside - 5-11, 167 pound junior stepped into a starting role at the I-Back position when 1000 yard rusher Logan Duryee couldn't hack it after being ill all week. All Flott did was carry the ball 26 times for 149 yards and two touchdowns in the Warriors 42-28 win over Omaha North. Flott actually has 493 yards on 90 carries this season, so carrying the ball isn't exactly new stuff to him.

*Kyle Francois-Lourdes Central Catholic - There may have been a few skeptics a couple of weeks back when this lad kicked in the afterburners for 416 yards on 38 carries in a 58-40 win over Mead. The 5-7, 150 pound senior laid that to rest in that 78-48 win over Cedar Bluffs by rushing for 229 yards on 20 carries and 5 touchdown runs. Kyle's scoring runs covered 4, 44, 39, 9, and 23 yards, swelling his season total to 1,290 yards and 26 TDs. We'll will be headed to Dwight Thursday night to watch Mr. Francois and his buddies tangle with unbeaten East Butler. Oh yeah, Lourdes is 7-0 as well. I may never want that baby to end.

*Skyler Ratkovec-East Butler - One big reason the Tigers are currently 7-0, is Skyler Ratkovec. The dual threat quarterback passed for 189 yards and rushed for another 103, in the Tigers 70-14 romp over Omaha Christian Academy. With one regular season game to go, Skyler has rushed for 1,149 yards and passed for an additional 1,253 big ones. The game with Nebraska City Lourdes Thursday is for the D-1, District 1 Championship and win or lose, it appears both teams will have a home game the first round of the playoffs that begin a week from Thursday.

*Andrew Fangman-Elgin/Elgin Pope John - You know what? I'm not sure any defense can hold this kid to under a hundred yards rushing. The bigger question would be, can anybody hold him under 200? Fangman's lowest rushing output of the season came against Creighton, a team he still managed to go off for 172 yards and 3 TDs. In 7 games this fall, Andrew Fangman has rushed for at least 170 yards and never less than 3 touchdowns. Add those together and you get 1,553 carries on 193 totes and 29 touchdowns. Hold on there, Hoss. The 178 pound senior has recorded at least 7 tackles each and every game, giving him 78 for the year. No way you can overlook this young man on an All-State team. Fangman is just that good.

*Brayden Olson-St. Edward - The St. Ed Rocket made every carry count in the Beavers easy 61-7 win at Deshler. Olson busted loose for 176 yards on only 9 carries, scoring on runs of 3, 43, 7, and 64 yards in the victory. That sets the junior speedster at 996 yards for the year, with 21 TDs. The Beavers close the regular season at Spalding Academy in what should be a top notch 6-Man matchup. Look for St. Edward in those 6-Man playoffs......maybe in Kearney.

*Garrett Leach-Sutton - Mustangs fed Leach the ball 50 times and he ran for 254 yards in their 36-22 loss to St. Cecilia last Friday. MaxPreps reports that Leach has gained 1,708 yards this fall after 8 games.

*Chris Doty-Grand Island - Islander running back enjoyed the best night of his career with a 200 yard rushing outing against Lincoln NE last Thursday. GI breezed to a 51-14 victory to rebound from a shocking 13-10 loss to Millard South. Doty ran 33 times, scoring on runs of 53 and 3 yards, plus a 22 yard touchdown reception against Northeast. The Islanders face an improving North Platte at home on Friday as they prepare for a playoff run.

*Trey Kissack-Grand Island - Doty's backfield mate completed 25 of 36 passes for 260 yards in the Northeast victory, connecting for 4 TDs. Trey's scoring tosses went to Chris Doty (22 yards), Keenan Ketteler (9 yards), Victor Stobbe (38 yards) and a 4 yard throw to Brendan Barnes. For the season, the accurate Kissack has completed 138 out of 201 passes for 1,607 yards and 17 TDs. Outstanding for a first year starter in the brutal Class A ranks.

*Grant Lucas, Brody Zabel, and Austin Schultz - Norris - Lucas was a perfect Friday Night Prep Football Hero in the win over Beatrice last Friday. Grant drilled a 25 yard field goal through the uprights with 19 seconds left in the game to lift the Titans to a 31-29 win over favored Beatrice. Junior Brody Zabel was part of a two-headed rushing monster that gave the Orangemen fits all night. Zabel ran for 152 yards on 19 carries, while Austin Schultz actually topped that with his 155 yards on 26 touches. Zabel, a bruising 195 fullback, is flirting with a 1000 yard rushing season with his 877 yards after 8 games. Zabel may have to giddyup the last game of the regular season against Crete because Norris, at 2-6, does not appear to be a playoff bound team.

*Jacob Simonson-GI Heartland Lutheran - The Red Hornets won their 3rd game of the 2015 season with a 48-20 trouncing of Hampton. Simonson had his usual huge numbers, completing 13 of 19 passes for 239 yards and 6 TD throws. For the season, Simonson, who leads Class D-2 in passing yardage, has connected on 129 of his 232 passes for 2,128 yards and 32 touchdowns with only 7 interceptions and honestly, more dropped passes than he cares to think about. This is a dedicated football player who watches 15 to 20 hours of film a week preparing for the upcoming game.

*Cody Nickel-Axtell - I saw this kid bowl over defenders in Shelton a couple of weeks ago, on his way to 190 yards. Well, last week in a 62-37 win over Elm Creek, the 5-11, 215 pound battering ram, drug a few of those Elm Creek boys with the Michigan replica helmets, for 341 yards on 31 carries and 4 TDs. That rockets Nickel's 2015 rushing total to 1,191 yards and 15 touchdowns. Holy Moly, can this guy get the yards after contact!

*Derek Tachovsky-Wilber-Clatonia - 6-0, 190 pound back bulldozed his way to 119 yards on 18 tries and a 16 yard TD in Wilber-Clatonia's 56-12 win over Lincoln Christian. These Wolverines are 8-0 ya know, and if I were a team that was playoff bound, I just may want to scout these Wilber fellas. By the way, Tachovsky has 883 yards rushing for the year and 9 TDs. Tach also has 36 tackles from his linebacker position.

*Wyatt Ehlers-Centennial - Threw for 200 yards in the Broncos 33-14 win over Shelby/Rising City. Ehlers was good on 11 of his 20 throws. Teammate Brayden Obermeier caught 3 of those aerials for touchdown receptions of 13, 73, and 5 yards in the win.

*Rowan Ford-South Platte (Big Springs/Brule) - How about this dude? 5 feet 4 inches tall and 140 pounds and hit the 1000 yard rushing mark a week ago, despite his team only winning 2 games. Ford has rushed for over a 100 yards in every single game but the opener against Wallace (56 yards) and now sits at 1,169 yards and 16 TDs. Rowan is also the Blue Knights Quarterback, yeah at 5-4 inches tall! Still.....he has managed to complete 23 of 57 passes for 437 yards, 8 TDs and only 3 picks.

Big heart in a little body!

*Bailey Witt-Falls City Sacred Heart - 239 yards passing in the Irish 56-14 over the Sterling Jets. Witt found his favorite target, Henry Arnold for scoring passes that covered 70, 39, and 36 yards. Witt has thrown for 769 yards and 13 TDs for Sacred Heart this fall.

*Traceten Halley, Brad Johnston-Scottsbluff - Didn't take too many carries for these guys to hit the century mark in the rushing department in the Gering game. Halley carried only 3 times, but ran for 117 yards and a 37 yard TD scamper. Johnston toted the pig only 6 times, but managed to rush for 115 yards. Half of Brad's touches went for touchdowns on runs of 14, 1, and 13 yards. The Bearcats raced to a 42-0 halftime lead, enroute to a 55-20 win.

Jacey Nutter-Sandhills-Thedford - Threw for 161 yards and 3 touchdowns in the Knights 34-20 win over Paxton. That raised the 6-1, 195 junior's passing total is 1,047 yards after 7 games this season. What is important here, is that Nutter threw for a 1000 yards in a new balanced offense after putting the ball in the air an ungodly 282 times a year ago. Nutter completed 164 of those for 2,345 yards and 37 touchdowns and still rushed for 505 yards. This season, Jacey has launched only 81 passes, completing 56% of those and already hit that 1000 yard mark.

The Knights made it all the way to the quarterfinals before losing to Anselmo-Merna (44-8) in bitterly cold, not fit for humans, weather a year ago. This fall, Sandhills-Thedford has dropped only one game (34-36 to Stuart) and are looking strong once again as the regular season winds down. There will be no putting the ball in the air 41 times in a game for Nutter this fall and the Knights may be a better team because of it.

*Tyler Reikofski-Osmond - Tigers were blitzed by #1 Chambers/Wheeler Central 80-44, but the 195 pound junior still rushed 31 bruising times for 102 well earned yards, raising his season rushing total to an even-steven, 1000 yards right on the dot. The rugged Reikofski has also made 54 tackles for Osmond and recovered 3 fumbles this season.

Matt McCarthy-Garden County - Honest to goodness, put yourself in Mccarthy's football shoes. You rush for 1,205 yards and 26 touchdowns as a junior, You catch 19 passes for 481 yards and 9 more touchdowns. You make a whopping 86 tackles on defense and recover a fumble. You also return and punt and a kickoff for scores as your team makes it all the way to the quarterfinals before losing a heartbreaker to Maxwell, 32-28. Are you looking forward to your senior season or what? Your team returns 9 starters for an 8-Man team. 2,000+ rushing yards in 2015? You bet, baby!

So what transpires? Nearly every single game is a blowout against undermanned teams. Check this out for poor Matt McCarthy's 2015 game slate:

Despite carrying the ball only 68 times in 7 games, the bearded McCarthy has still broken the 1000 yard barrier for the 2nd consecutive season, running for 19 Touchdowns and an average of 15.6 yards every time he gets the ball. The 5-8, 140 pound senior has also only had a shot at catching 6 passes, yet has 190 yards and 4 TDs. That's 31.6 yards a catch! The exciting news for McCarthy is that Garden County faces a good 6-1 Crawford Rams team to close the season this Friday in Oshkosh. Look out in the playoffs for this team.

*Cody Stratman-Wynot - Another returning 1000 yard runner facing the same dilemma as McCarthy. In the Blue Devils 66-22 frolic over Bancroft-Rosalie, Stratman carried only 9 times, but had 109 yards rushing and 3 TDs. Those yards elevated Startman to 1,075 yards with only 97 rushes this fall (11.1/carry). Last season the 5-8, 160 pounder got 190 carries and turned those into 1,984 yards and 35 touchdowns. And so goes the game of 8-Man football.