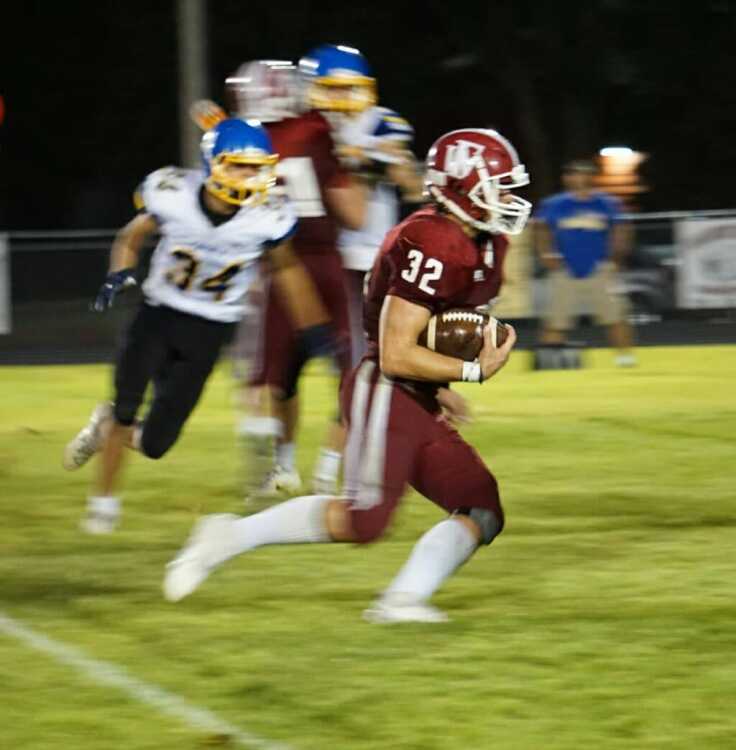 Fullerton High's Bracy Cook (#32 w/ball) is one of 8-Man football's most versatile players with his rushing, receiving and passing skills offensively, and his jarring tackles on defense. *(Photo courtesy of Cathy Cook of Fullerton)

*Brady Cook, Aiden Norman, Tyler Gochenour-Fullerton - Cook and Norman combined for 453 yards rushing and 9 touchdowns in Fullerton’s wild 74-42 win over the Nebraska Lutheran Aerial Show. Brady Cook, who ran for over a thousand yards a year ago, scooted for 251 yards on 14 totes with 4 touchdowns. Aiden Norman really had himself a night with his 202 yards on 19 carries with 5 TDs. Aiden also returned a kickoff 79 yards for a score, made 6 solo tackles on defense, intercepted a pass, recovered a fumble and converted 5 double PATS on runs.

Tyler Gochenour gave Nebraska Lutheran little or no chance to return kickoffs by booting 9 of 11 of them in the endzone for touchbacks. Brady Cook by the way, has 409 rushing yards to date with 8 touchdowns.

*Izaac Dickey, Jackson Lindburg, Alex Noyd-Cross County - In a 58-14 victory over an improved Twin River team, Izaac Dickey ran for 127 yards with 4 touchdowns, Jackson Lindburg added 103 yards with a TD and All-State Junior Alex Noyd garnered 18 tackles on defense and generally made life miserable for the Titans, as did the strongman Dickey, who made three “friendly” visits to the Twin River backfield resulting tackles for losses. He also recovered a fumble.

*Isaiah Weber-Gretna - 5-7, 170 pound junior erupted for 194 yards rushing and 2 touchdowns on 20 carries in the Dragons 49-20 victory over Millard South. Weber also had 4 receptions for 40 yards and made 2 solo stops on defense, which included a sack. Weber’s 2022 rushing total shot up to 457 yards to date.

*Evan Hansen-Millard North - Mustang quarterback made #1 Omaha Westside work a little bit before the Warriors finally put away Millard North 35-23. The 5-9, 155 pound junior ran 21 times for 183 yards including a 43 yard TD which put the Mustangs up 14-7 at the time.

*Charmar Brown-Creighton Prep - Another big night for the shift senior in the Jays 31-7 win over Millard West. “Marty” rambled for 150 yards on 25 carries and two TDs, giving his 756 yards (9 TDs) for the year.

*Tadd TeBrink-Crete - Rolled through the Schuyler “D” with his 227 yards and 3 TDs on 25 carries in the Cardinals 28-7 win over the Warriors.

*Evan Kastons-Waverly - Junior escaped for 177 yards on 17 carries with touchdown runs of 23 and 77 yards in Waverly’s 42-0 shutout of Norris.

*Jax Biehl, Jackson Martin-Fairbury - The famous Jax Biehl to Jackson Martin hookup accounted for every touchdown (31, 8 17, 43 yards) in the Jeffs 44-25 loss to an ever improving Minden team. Biehl, The C-1 Aerial King thus far in 2002, has thrown for a whopping 1,279 yards and 20 touchdowns in just 4 games while senior classmate Jackson Martin has hauled in 29 of Biehl’s 72 pass completions for a monster 659 yards and 9 TDs.

We’re talking about just 4 games here. You don’t suppose Biehl and Martin play a little catch during the summer, do you?

*Ben Ely, Caden Fry, Brooks Armstrong-Red Cloud - The Warriors finally shook off Pawnee City for a 55-30 win last week after the Indians built up a 30-20 lead halfway through the 2nd quarter. Ely blew up the Pawnee defense with his 232 yards on 22 carries with TD runs of 39, 1 and 4 yards. He also completed 6 of 11 passes for 101 yards and a 15 yard TD strike to Caden Fry.

*Isaac Classen-Humphrey St. Francis - 9 carries, 131 yards and three touchdowns in the Flyers 68-12 win over East Butler. Mason Geilenkirchen (try getting that name on the back of a St. Frans jersey) registered both a rushing and receiving touchdown

*Luke Kasten-Potter-Dix - The King of 6-Man Football was never better in the #1 Coyotes 63-0 win over Sioux County. The solid gold Kasten rolled for 145 yards on 9 carries and FIVE touchdowns and 9 tackles (2 sacks on defense) in limited action.

*Trev Peters-Heartland (Henderson) - Laid 4 touchdowns on McCool Junction in the Huskies 70-0 beat down of the Mustangs. The fleet-footed Peters scored on rushing touchdowns covering 68, 47 and 46 yards and also recorded a 39 yard Pick 6 in the rout.

This Trev Peters is an outstanding athlete that I’ve seen live on the gridiron and the hardwood.

*Gage Mintken, Dylan Young-Hay Springs - The Hawks lost a 44-42 heartbreaker to Arthur County, but that didn’t slow down Mintken and Young.

Gage Mintken escaped for 173 yards on 31 carries with 3 TDs, while QB Dylan Young was sharp, completing 7 of 12 passes for 154 yards and a pair of touchdowns, one of which was a sparkling 66 yard scoring pass to Mintken.

*Kyle Kasik-Clarkson-Leigh - A fine night for the great Kasik, who ran for a modest 118 yards on 17 touches and FOUR touchdowns in the Patriots 54-26 win over a pesky Shelby/Rising City squad.