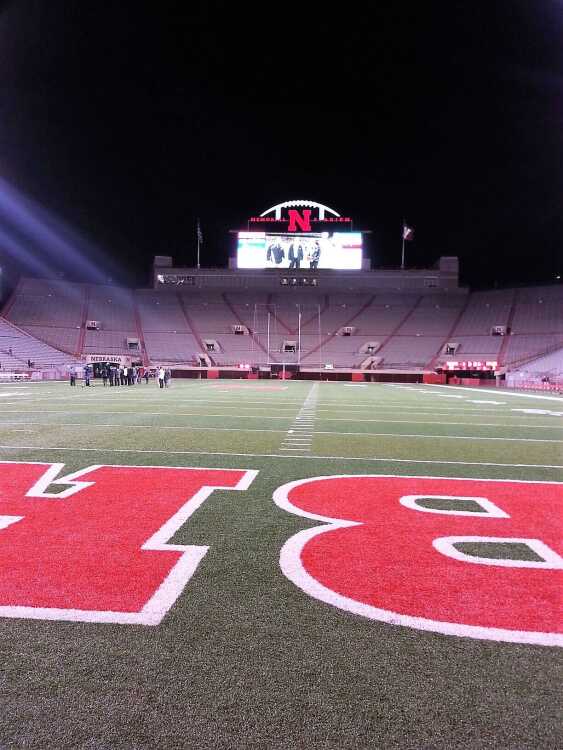 *Tyson Denkert-Kenesaw - Ran for 245 yards and 5 touchdowns on 19 carries, completed 3 of 5 passes for 72 yards and another score, plus made 6 stops on defense in the Class D-1, #1 Blue Devils 58-7 victory over Blue Hill. That elevated the incomparable Denkert over the 5,000 career rushing yards mark, placing him in elite company with the other 55 backs in history to reach the coveted 5,000 career rushing yards milestone.

In 35 career games, Tyson Denkert has rushed for 5,119 yards with 93 touchdowns, compiled 6,775 Total Yards, made 295 tackles on defense with 13 interceptions, recovered 8 fumbles, caused 5 more, and crossed the goal line a total of 102 times.

In 26 games, beginning with his sophomore season, Denkert has rushed for over 100 yards an incredible 24 out of those 26 games, including the last 13 in a row. He has twelve 200+ rushing games and one 300+ game in there.

A model of remarkable consistency, Tyson Denkert is the epitome of Kenesaw high school football. When you have players like Sean Daly, Preston Schnitzler, Grant Robinson, Shane Powell, Austin Schnitzler, Mike Hogan, Kurt Harms, Tyson Burr, John Schuster, Chad Uden, John Heckenlively and Pat Daly preceding you in greatness and your name is at the top of that august company, you must be the G.O.A.T.

*Kytan Fyfe-Grand Island Senior High - Senior QB/LB completed 13 of 22 passes for 205 yards with a 4 yard scoring strike to Dylan Sextro, rushed 14 times for 188 yards with a 32 yard TD scamper in there, CAUGHT an 18 yard touchdown reception from backup QB Cohen Evans, and made 7 tackles on defense. All this coming in an exciting 31-20 win over Millard North.

Junior QB Trey Bird completed 11 of 16 passes for 169 yards and a pair of scoring tosses to Isaac Connor (16 yards) and Cayden Bluhm (35 yards), giving the rifle-armed, sharpshooter 1,193 yards (64% completion rate) and 13 TDs (1 INT) for the year. The great Cayden Bluhm caught 6 Bird aerials, good for 108 yards against Elkhorn, giving the blond bomb catcher 603 receiving yards in 7 games. And, of course, none of these numbers could be possible if not for the consistent, top notch performance of Nebraska’s top ranked high school offensive line; the BADger O-Line of Carter Lerch, Nate Schaefer, Cody Harris, Jake Stier and Jameson Krayneski.

*Trevor Thomson-Summerland - The magnificent junior RB rambled for a massive 307 yards and SIX touchdowns on just TEN carries in Summerland’s (Clearwater/Orchard/Ewing) 50-6 win over Creighton. Thomson bolted for scoring jaunts covering 30, 35, 46, 61, 3 and 55 yards in the route, giving him 1,514 yards for the season. Thomson looked so impressive on these 6 touchdown runs for the simple fact he was touched just ONCE on two of the runs. The remaining four scoring runs, he literally went untouched. Unbelievable.

This dude can really Ball It, as witnessed by the fact he has been held under 100 yards rushing only 3 times during his 15 game career.

You may recall, Trevor rushed for 1,226 yards and 11 touchdowns as a sophomore playing for a first year program a year ago. This kid is really Special.

*Cole Ballard-Elkhorn South - 6-0, 180 pound junior continued his rushing blitz with his 185 yards and 3 touchdowns on a grueling 35 carries in the Storms big 28-20 win over Gretna last Thursday night. Ballard scored from 4, 2 and 37 yards away and lived up to the MVP status his teammates bestowed upon him a year ago as a sophomore.

Ballard’s yards after contact against Gretna was incredible, although certainly nothing out of his normal night’s work. Ballard has now rushed for 834 yards with 19 TDs after 7 games. That total is already better than the 814 yards and 14 TDs he churned out a year ago for Elkhorn South, the Class A state playoffs runner-up..

*LJ Richardson, Luke Johannsen, Kaden Helms, Micah Riley/Ducker-Bellevue West - Big night for LJ Richardson as the senior All-Stater powered his way to 223 yards and 3 touchdowns (13, 31 12 yard runs) on 17 carries in the Thunderbirds wild 55-31 victory over Millard West. QB Luke Richardson was VERY sharp, completing 15 of his 19 pass attempts for a massive 296 yards and 3 TDs. Kaden Helms led the Bellevue West receivers with 8 catches for 183 big ones and a 54 yard touchdown catch.

Micah Riley caught 6 passes for 115 yards, one of which was a 44 yard touchdown catch. Dae’Vonn Hall, the sophomore, grabbed the other TD toss from Richardson, a 31 yarder.

Football fans, Hunter Mortimer is a PURE football talent. The extraordinary Weeping Water product has started at quarterback and linebacker since game ONE of his freshman year, making All-District each season. Mortimer has Career totals of 3,630 yards rushing with 58 TDs, 2,321 yards passing with 45 more touchdowns and has piled up 285 tackles for that Indians defense.

A player of this caliber normally comes around just once in a lifetime in a town the size of Weeping Water. This young man is simply an incredible football player. No other way to put it.

Weeping Water is currently rated #7 in the Class D-1 ratings (World-Herald/Stu Pospisil) and has already won their District 1 Title with a perfect 4-0 record.

*Levi Belina, Lance Brester-Howells-Dodge - Super senior Levi Belina rushed for 179 yards and 3 TDs on just 13 carries in the Jaguars 50-12 win over West Point Guardian Angels CC. Belina, who is just 39 yards away from his THIRD 1000 yard rushing season, scored on 6, 52 and 37 yards against GACC. Lance Brester, a 6-0, 180 pound junior, added 104 yards rushing with two touchdown runs covering 67 and 37 yards. Brester also grabbed a 19 yard scoring pass from Gavin Nelson with 10 minutes left in the 2nd quarter, answering the Bluejays first TD in a span of just 1:43.

That’s Howells-Dodge football, friends. AND, this Friday, it’s the annual Bacon Bowl when 7-0 Howells-Dodge travels to 5-2 Clarkson-Leigh for the regular season finale.

*Hudson Stout, Hayden Kramer-Medicine Valley - The deadliest pass/catch duo in 8-Man football struck again in Medicine Valley’s wild 54-52 win over Loomis. Two time All-District QB Hudson Stout completed 15 of 30 passes for 238 yards and SIX touchdowns, CAUGHT a TD pass, rushed for another 34 yards, made 4 tackles and notched an interception on defense. Kramer, who had 858 receiving yards a year ago, caught 8 passes for 88 yards and a pair of TDs, rushed for 80 yards and a touchdown, completed 2 of 3 passes for 81 yards, including a 68 yard TD toss to Hudson Stout on the games first play, made 11 tackles on defense and punted 4 times for a 35 yard average.

And, Medicine Valley’s 2021 record? 5-2 overall record with an unblemished 4-0 D-2, District 10 record with one game remaining against an 0-7 Maywood/Hayes Center squad. These Raiders are going to be a scary playoff draw for someone in the opening round of the D-2 playoffs.

In 16 games this year and last season. Evan Haisch has 14 hundred yard plus rushing games and 7 games over 200 yards rushing. Just mind-boggling. The 6-1 Bears have a huge one this Friday with undefeated Lutheran High NE. The winner gets the Class D-1, District 6 crown.

*Blake Detamore-Doniphan-Trumbull - Senior RB/LB notched his 5th 100 plus rushing game of the year in the Cardinals 36-24 win over a good Sandy Creek team. Detamore scooted for 189 yards and a pair of touchdowns on 28 carries and added 7 solo stops on defense. Blake now has 933 rushing yards with two regular season games remaining.

The most impressive part of Blake Detamore’s game is his remarkable tackling tecnique The dude rarely needs a backup when tackling an opponent in the open field. Thus far in 2021, Detamore has 66 tackles. A staggering 61 of those are SOLO STOPS. His career tackling numbers; 121 total tackles…….108 UNASSISTED with 15 tackles for losses. Pretty tough to top those solo numbers at any level of Nebraska high school football.

*Corbin Horner-Dundy County/Stratton - Corbin Horner, a converted wide receiver, ran for 141 yards and 3 TDs on just 11 carries in the Tigers 50-8 blasting of Southern Valley. That gives the speedy 5-10, 170 pound junior 959 yards rushing after 7 games. Horner also has 243 receiving yards this year with 2 touchdowns. Those statistics were reversed a season ago when Horner had 491 receiving yards and 199 yards rushing.

Just another weapon for super coach Mike Spargo and the Tigers.

*Riley Penrose-West Point-Beemer - Filling the shoes of departed All-State QB Jesus Barrigan wasn’t easy, but Penrose has done a terrific job giving it his best shot in 2021. In the Cadets 57-41 loss to powerhouse Pierce, Penrose bolted for 215 yards and 3 touchdowns on just 15 carries in the loss. Riley’s scoring runs covered 45, 52, and 55 yards. The 6-0, 190 athletic Penrose also attempted just 6 passes, but completed 2, one of which was a 53 yard scoring strike to Bennett Meyer.

*Jimmy Allen, Simon McFarland-Crofton - Big night for the All-State 1000 yarder from a year ago. Allen broke loose for 218 yards and 2 TDs (18, 18 yards) on 28 carries in Crofton’s 29-7 win over Ponca. QB McFarland was a perfect 6 for 6 through the air for 69 yards which included a 20 touchdown toss to Mayson Ostermeyer.

Jimmy Allen, who rushed for 1,402 yards and 23 TDs a year ago, appears to have missed the Twin River game this season and carried only 4 times for 2 yards against Oakland-Craig, contributing to his much lower 2021 total of 814 yards. Make no mistake about it though, Jimmy Allen is one of the best running backs below Class A.

*Cooper Slingsby-Ansley-Litchfield - 162 yards on 28 carries and touchdown runs of 3 and 16 yards in the Spartan’s 36-20 win over South Loup.